Back in 2011 I received a tweet from @samsupplier saying “Alright Bruv, do you want to come on a surf trip with me and give me some coaching, I’ll pay everything innit.”

I thought OK who’s this rudeboy DJ wanting to add surfing to his resume, so I politely declined the generous offer as I was actually too busy at the time, but thought I’d invite him for a dawnie the following morning and see how keen he really was.

As dawn broke the next day, Sam rolls into Watergate Bay car park in my favourite car at the time, a big black BMW X5, unwinds the blacked out window and greets me with biggest most unexpected full froth face as I glance at a well used JP shortboard in the back.

It all clashed tremendously, but we surfed perfect waves in the corner for about 3-4 hours, with only a handful of locals out. I thought holy shit this guy loves it.

Six years later, Sam Supplier’s DJ career has gone through the roof; he’s signed a proper record deal with Sony/Colombia, has a much anticipated single about to be released, has collaborated with the biggest names in the music industry, is constantly traveling around the world playing serious venues, is a resident DJ on London’s biggest radio station, upgraded to a bad man Range Rover then upgraded further to a sporty Audi and is surfing better than ever.

He’s back in the country less than 12 hours and he’s driven down the M5 for a small windswell in Newquay, so I thought I better catch up with one of the UK’s most unlikely frothers for a quick cup of tea. WL – Yes Bruvva, good to see you as always, where you have you just come back from?

SS – Mate two days ago I was in Ayia Napa proper one in one out stuff, then flew back to London for One Dance festival where I had like 6,000 heads going mad, then up to Manchester, then back down for Garage Nation and then I played an after party at the legendary Lightbox in Vauxhall that finished 7am Monday morning. It’s been nuts.

WL – Can you believe it’s been two years since we went Wireless Festival? I remember you saying to me “Look Bruv, if man comes up to me wanting a selfie and that don’t laugh yeah” I was like HA as if mate and what happens when we walk through the gates; “SUPPLIER, YES FAM, LET’S HAVE A PHOTO.” Ha ha, madness. Obviously I’m out of the loop when it comes this house scene so that was awesome for me to witness, but I imagine the WL audience is too, so tell our readers a little bit about yourself.

WL -So what’s the best thing about being a London-based DJ / Surfer?

SS – London is a sick place to be if you’re into music, one of the best in the World, but it gets pretty mental and going away to surf for a day or two helps clear your head and lift the haze from the weekend, so I come back more focused. But more than anything, I can get anywhere in the country, even Europe in hardly any time at all. Like I score every time, I just see a swell and go to down to Cornwall no problem, or up to the North East in the same amount of time, or Kimmeridge, that place pumps. Shit I can actually go from my house to that surf camp in Loredo, Northern Spain in 4 hours door to door! Being in London is a sick place to be a surfer if you’re keen.

WL – Yeah but I’ve been around your endz mate, it doesn’t ooze surf culture, how did you get into surfing?

SS – Mate it actually started with those nice British family holidays down to Porthtowan when I was 7 or 8 years old so I would get in on a boogie board and that, then my Dad got a caravan on the Gower when I was a bit older so I gave surfing a go and loved it. When the music took off I neglected the surfing a bit you know and spent a few years drinking, girls and that, but that phase past, the froth came back and the past few years I’m loving it more than ever.

WL – Yeah you do man. How did you get into the music thing then?

One day I couldn’t afford to buy something like a pair of socks or something for my kid and I was like;

“Fuck this, I need to make some proper money”

and from then on it was just hard work, doing some dodgy things, pirate radio and that, standing outside clubs til stupid hours handing out flyers to ravers, all of that. Anything is possible if you’re motivated to get something so much and you want it so badly that you’re willing to put the work in.

WL – True true, definitely got to put that work in. So how do your music peers react when you talk about or mention that you surf?

SS – They all know I surf as I mention it on the show, on my snapchat, always posting about surfing, that’s where my long hair comes from man. It used to be kind of laughed at but you know over the past few years surfing has become this cool thing and with the whole hipster thing in Shoreditch the music industry has welcomed surfing in, especially house and weird electro music.

WL – Yeah it looks like you had two different lives, combining quite unnaturally. Has it been hard to maintain your froth levels whilst flying all over the world playing sets at unruly hours ultimately keeping both passions alive?

SS – Well as cliché as it sounds, surfing is an addiction so I just stuck at it and now I’m in the position where I can combine the two, so I get bookings in Spain, Portugal, Oz, Bali where I can surf as well. I’ve actually taken a couple of bookings for less money to go to Lisbon or whatever as opposed to down the road ha ha, my agent does not like that.

WL – Is there anywhere you’ve not been yet that would tick both boxes?

SS – Yes mate, I’m going Bali soon which I’m frothing for, but doing a big show in LA with Fisher (Cutsnake DJ and Pro Surfer) would be sick.

WL – Yes that would! I’ve heard big stars like Wiley, Rita Ora and Wiz Kalifa and that on your radio show and yeah you were buzzing as always, but when you did that collabo show with the Cutsnake crew it seemed like you were more starstruck to meet those guys than meeting Wiley for example.

SS – Yeah I was if I’m honest, cos I grew up around Wiley and Skepta, so it’s kind of normal to me you know, but DJ’ing and then surfing with Fish was sick man. We surfed Snapper Rocks and Parko, Fanning, Stephanie Gilmore and all of that lot were out there getting really barrelled, that was mad, I proper star struck you get me?

WL – So where’s your favourite place in the World to surf?

SS – Mate it’s got to be Morocco, those waves are so sick.

SS – Brighton is consistently shit, but one time the charts were saying 6ft @ 14 seconds in Thurso, so I drove up there and it was like a lake! So that was a massive let down, but I went round the corner to a left that was getting some swell and surfed there and got pissed in a proper local pub.

SS – Well now I’ve got my own tunes out and it’s Summer time, playing my own tunes at festivals here in the UK is amazing. It’s like the same froth as getting barrelled. It’s got to be the same natural high or something.

WL – Yeah something to do with serotonin or something I imagine. Where’s the worst place you’ve ever DJ’d?

SS – Amsterdam. 100%. I don’t smoke weed as you know, but thought when in Rome yeah, so I went to a coffee shop and did the thing and mate, within minutes I’m back in the hotel room, fully spinning, proper whitey saying to my agent that I can’t do the gig, you’ve got to get me home. It was the worst set of my life and the only time I can honestly say people left the dancefloor, I haven’t been back ha ha.

WL – Ha ha, what’s the sketchiest situation you’ve been in whilst doing music?

SS – Bruv, this dude got shot right next to me a few years ago. With a fucking sawn off! Fucking nuts mate.

WL – Holy shit, bet that was scary. What about surfing then, when have you been most scared?

SS – Mate when Fisher took me to this secret spot I swear it was just as scary, I nearly died Bruv, there’s been a couple of times in Oz when it’s been like double / triple over head and I’m way out of my depth. There was another time a fin came out of the water in Byron Bay, which was sketchy. Actually that wave I got at Lobos in Fuerteventura with you on that Errant trip was sketchy as, I wasn’t as good back than and was proper shitting it, I think I thought I was gonna die on that middle section. Ha ha maybe surfing’s scarier than DJ’ing!

WL – Ha ha yeah maybe. So who inspires you the most in the surf world?

SS – Mate I come from hardship, like I really don’t come from a nice area, so to me it’s always been a way to escape the shit. I get away, surf and enjoy myself. So anyone surfing inspires me, no matter the age or level.

WW – Nice mate. What piece of advice would you give the 15 y/0 version of yourself?

SS – Basically you can achieve anything in life if you’re willing to live, sleep and breathe it. As long as you’re the best you can be, you may not be the best or whatever but as long as you are at the best level you can be, you can turn that passion into a career and make money out of it. We’re doing it bruv, we’re the proof!

WL – Wise words mate. Complete the sentence. If I were a millionaire….

SS – Yeah! If you want to share some waves and watch me DJ, come on the Ticket to Ride Trip to Spain this October innit! Ha ha ha. 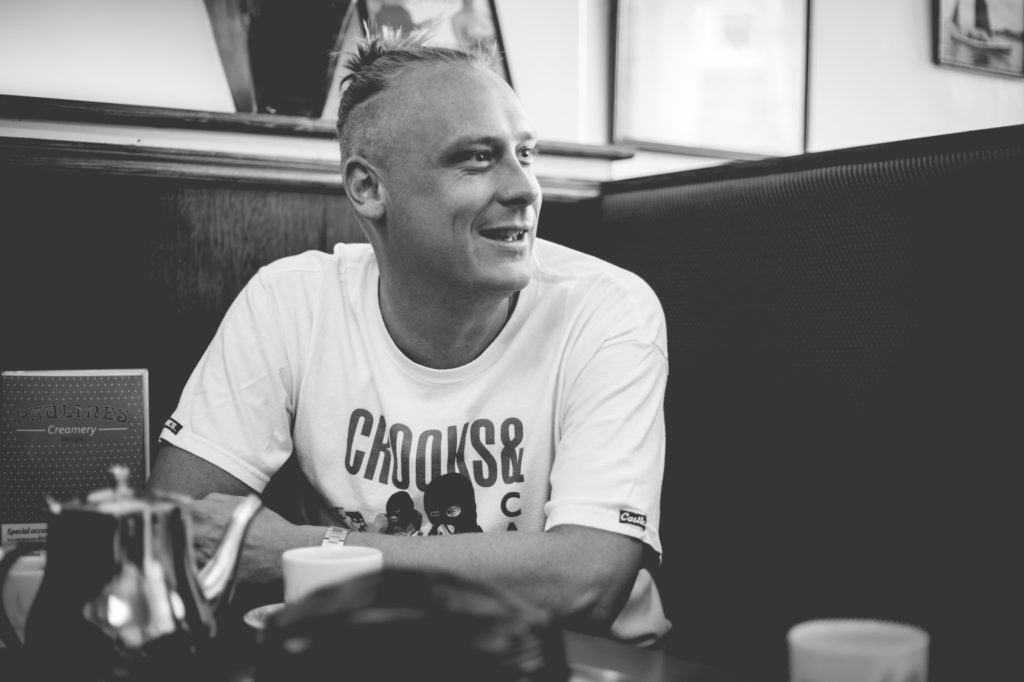