Home » SICK: A Quick Guide to Minimising your own Discomfort on a Surf Trip

SICK: A Quick Guide to Minimising your own Discomfort on a Surf Trip

Sick… A word I find is used far too often in surf culture. A word I find actually makes my stomach turn whenever I find myself using it out of its correct context.

I expect this is born from my own relationship with surfing and its four letter word, a marriage that I find more often than not justifies the use of said word, although this time in its more clinical definition.

A few years ago I woke up to the daily animal chorus that is nature’s 5am alarm clock, deep (ish) in the Costa Rican jungle, with what I thought was another niggler of a hangover.

I considered this pretty standard, an expected reaction from the previous nights Imperials. However, an hour later my brains felt like they were about to be forced out of my skull like a less child friendly Playdoh machine.

Convinced this was going to be my untimely demise I drafted my last will and testament on my phone and called my Mum.

It’s this life changing event that leads me to put pen on paper and use my vast experience of traipsing about tropical surf destinations to knock up this quick guide to minimising your own discomfort on your own surf trip. Unless you’re still travelling with your parents or you have a really handy, mega-organised other half, you’re going to have to start to think about your exotic getaway a couple of months before you get on the plane.

Bang the name of your destination followed by “vaccinations” into Google and check out the common illnesses that are associated with the area you’re traveling to.

Getting a head start on this is quite important, a lot of tropical places require a jab or two for entry into the country and some medication can take weeks to start to work, or are given in a series of shots over a three or more weeks.

I’ve known several people who rock up to their GP a couple of days before their trip only to be told there’s no point in getting the hepatitis or typhoid needle as it wont even start to offer you any protection until they’re back in the UK, which to be fair could be quite handy if you live in one of our beloved seedy seaside towns.

Also, if you are on any medication, keep it in your hand luggage. No explanation necessary.

Although we might be well prepared for malaria and ever aware of potential terrorist attacks, most of us won’t hesitate to jump into a death-trap tuk tuk, pile into the back of a beaten up pickup, or straddle a mates 150cc 50p a day moped and bomb it amongst crazy local traffic hunting for waves.

Yes, it is half of the fun, but everyone knows someone who’s had a run-in with the Balinese tarmac, right? It’s proper dangerous. Even if you’re not in Indo most vehicles you will hire in third world surf destinations will be proper pieces of shit.

Just under a hundred foreigners died on the roads of Bali alone in 2015, so to avoid becoming one of the statistics look at hiring a local driver who will know the roads and more importantly the etiquette better than you ever will.

If your budget is thin, hire the best car you can afford. If you ignore this advice and opt for the death-trap Honda Vision, don’t drive after a day full of surfing and a few sun-downers.

You don’t have to deny yourself that sweet post-surf nectar, have plenty, just pay a local to drive you back to where you’re staying. You’ll be coughing up bugger all compared to a taxi at home and the local guy makes a few quid. Everyone’s a winner. Well, ok maybe not full death but at least some diarrhoea, dehydration, a rash and some sort of respiratory problem are standard issue.

Amongst my friends and I, these are the most common illnesses and although not (always) life-threatening, having to get out of perfect 4ft peelers because your groin feels like it’s on fire is annoying to say the least.

Some Canesten cream should clear that bad boy up in a day, just don’t scratch too much or you’ll also end up with a eye / mouth infection.

Also forget about the fluoride conspiracy for a moment and brush your teeth with an antibacterial mouthwash. It’s more about the bacteria harbouring on your toothbrush and the undrinkable tap water you’re brushing your teeth with, which is great way to get sick quick. Blast those pearly whites with the strongest stuff you can get your hands on. A selfish way to handle the Big D is to make sure you drag someone down with you. A roommate is best, just mimmic their diet and eating habits then if Bali belly comes a-calling you get sick with a mate.

Back that up with a visit to the nearest knock off DVD shop and can slob out watching movies all day together, the company is priceless (reassure each other you’re not about to die) and being ill can actually be a great excuse to seriously Netflix and Chill, or finish The Art of War, but be warned, without any media to consume you could possibly become insane as well.

Bearing this in mind, and it may sound obvious, but if you don’t have to slum it, don’t. There is nothing cool about being completely feral and sleeping in a hammock for $3 per night when you’d normally spend this on a coffee during your morning commute.

If you can afford a nice private cabana or an air conditioned apartment with a mini bar, do it. You’re on holiday, live outside your means for a couple of weeks.

You’ll thank me when you’re not running through a 12 bed dorm every hour to the one, inevitably occupied toilet, whilst trying to stop your bowels from violently evacuating all over your fellow dorm dwellers.

Assuming you’ve made it alive through the above and you actually manage to go surfing, make sure you sort out any reef cuts, rubs or ulcers before they become serious.

This is easier said than done when the surf’s pumping, but if you’re in a place for longer than a week and you’ve got a fin cut that could go nasty, it will. Keep it clean and dry and go see the local sights. It’s a nice break from chaining yourself to tide times and swell forecasts.

Call it a Day

Stressing out and worrying about things that haven’t happened can actually make you ill. So just enjoy the ride and try to travel with a sensible, slightly unsympathetic partner / friend who’s real about things and knows when its time to call a Doctor and when it’s time to ride it out.

If you feel you have to cut the trip short and go home, go home. but seek advice off the following people in this order. First, that sensible friend, then some local guy or that surf lodge owner you’ve got to know, next a doctor and finally your parents.

Parents are always the last as they will want you home a the slightest sniff of jungle fever, the local guy will have seen your condition a thousand times, your sensible mate will be able to make the impossible decision for you and the Doctor will give you sound medical advice. The waves the author was missing out on

Which leads us nicely back to my troublesome cranium, turns out I was in the early and very painful stages of bacterial meningitis.

Whilst getting screwed over in an American style pay-as-you-go private hospital that my travel insurance didn’t cover me for, my parents were ready to re-mortgage their house to pay the estimated $40,000 to keep me in the ward ‘under supervision’.

My partner at the time smelled a rat and suggested we get out of there and go to the free church-run hospital. I took her advice, so had a justified tantrum and ripped the IV out of my arm, got a patronising “good luck” off the Doctor, then took the advice of a very lovely trainee Doctor at the Church Hospital who had seen much worse things that day than my headache.

A couple of lumbar punctures and slightly less spinal fluid later, I was in the Caribbean taking my medication and ‘relaxing’ upon Doctors orders.

Be warned that when traveling almost every female you mix with will probably surf a bit, definitely do yoga and will be endearingly happy-go-lucky; a trifecta of qualities that will ensure they are incredibly aesthetically pleasing and appealing.

But try not to fall too hard for the first beautifully bronzed broad you meet as your daydreams of this exotic future wife will spread like a rash, soon consuming your every thought and before you know it you don’t care about the one thing you have risked all of the above for; waves.

Oh and wrap it up before you slap it up. Enough said. 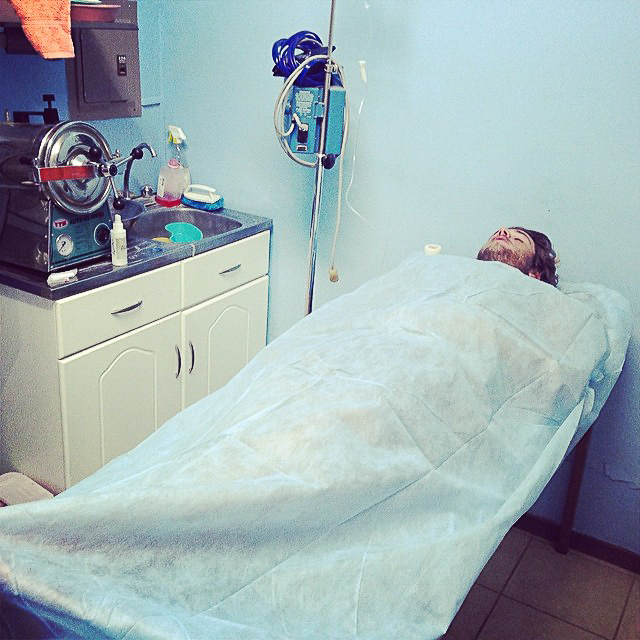 Max works for Ticket to Ride running surf and yoga adventures across the globe, using his experience of almost dying a handful of times whilst on surf trips, to make sure their customers don’t even come close. Join Max in Sri Lanka in October.