Almost a year ago to the day, Sunny Garcia came into the commentary booth at the Azores World Masters here in Santa Barbara, a beauty spot on the north coast of San Miguel island in the mid-Atlantic archipelago.

Sunny came in the booth to call a heat having lost relatively early in the event, an event in which he’d seemed every bit his usual, ebullient self.

Sure, the commentary booth was small and fairly spartan, just a table with a couple of screens on and two chairs, but Sunny’s presence, both his commanding physical stature as well as the general gravitas his presence carried, filled that room the moment he stepped in.

The powerful, gripping handshake, the muscled, bronzed torso covered in tattoos that anyone who’s been a fan of surfing over the past couple of decades would instantly recognise as his own, even the voice was unmistakable as that of one of the sport’s true icons.

Wherever you stood on his surfing, or on some of the controversial chapters in a storied career and life, Sunny Garcia was unmistakably a giant amongst men. A physical manifestation of power, alpha masculinity, above all, seemingly unwavering strength.

In amongst a heavy crew of surfing greats assembled on the cliff tops at the event over the course of that week last September, none commanded more respect from both among fellow competitors and the general public alike than the 2000 ASP World Champion, Vincent Sennen ‘Sunny’ Garcia.

Despite the passage of time since we last saw him competing in a jersey, despite the addition of a few pounds to an already heavyweight boxer-like stature, very little had changed about Sunny.

When he lost an early heat against Luke Egan, the trademark glare – surely one of the most frightening in the surf world – aimed at the judging tower was accompanied by middle fingers as a clear display of disapproval with the panel.

Presumably, surf fans watching around the world roared in delight; I know everyone working on the live production did, as the broadcast truck erupted in a chorus of approval in my headphones.

In uncertain times, it was good to know some things would surely never change, that certain surf world truths were immovable, immortal even.

The difference from what we’d come to expect over the years was that Sunny would very soon shrug it off with humour, given the overall amicable nature of the competition.

“Yeah I had to flip them the bird, just to let em know how I still feel when they still get it wrong,” Sunny laughed in commentary.

But things did change dramatically, so very nearly tragically, that night in April. And while news has since only trickled out very occasionally about a long and arduous road to recovery, this morning the surf world woke up to news of a significant step in the heaviest battle in Sunny Garcia’s life. 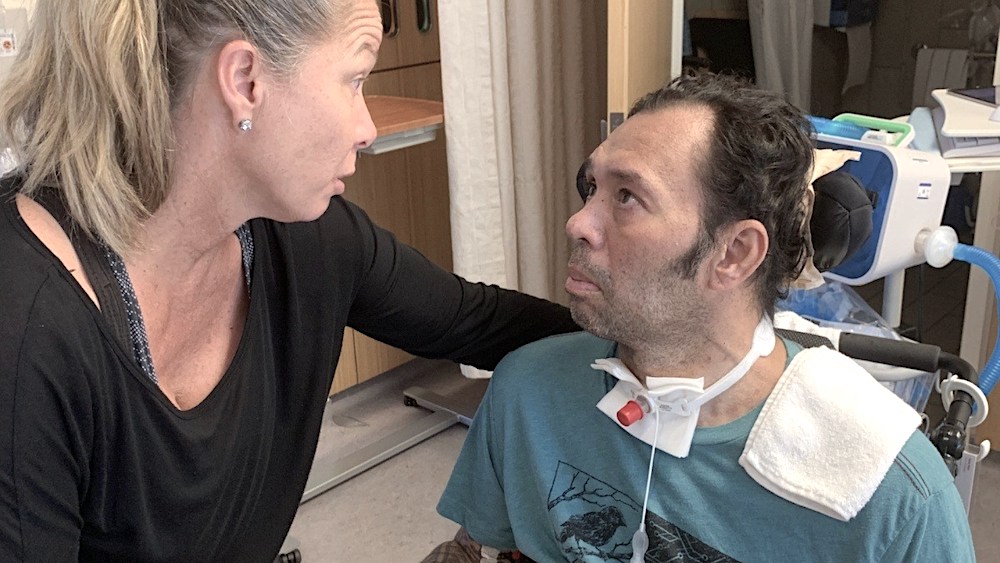 “We are taking one day at a time and celebrating each little triumph” Garcia’s daughter Kaila said via the @prayforsunny Instagram account. “Sunny is a warrior and fighting everyday to get better and stronger. He has said a few words and is now in therapy daily — physical, speech and occupational. The family thanks you for your continued support for Sunny as he continues to heal. It’s going to be a marathon not a sprint but we work every day to make sure he is surrounded with love, laughter and ohana.”

Meanwhile, according to a piece on The Inertia Janae Twisselman, a close friend of the Garcia family said, “The (family) is still in zone where they don’t want to give out too much info because they’re still trying to figure everything out. From everything we’ve learned from past history (and trauma like this), it’s a long process. But he’s been working out on a stationary bike, assisted, and he’s definitely able to hear voices and track people and read people’s hands. He’s saying words, he’s not totally audible, but he’s gaining his motor functions, working on physical movements and brain functionality and auditory processes. It’s just a really long recovery road.”

A GoFundMe account has been set up for those who wish to offer support for medical bills in Sunny’s recovery.

While the family has wished to remain private about many aspects of the situation Sunny faces and how exactly he got there, there has been much speculation that the depression and mental health issues he did start to go public with via his social media accounts in 2018 played a significant role. The fact that someone as strong as Sunny Garcia can suffer with kind of these issues only goes to show how nobody is immune from difficulties with their mental health.
Find out more about any issue surrounding mental health.