The official season opener to European professional surfing went off with a bang last week in Tenerife.

While the Continent has been getting a combination of brutal cold snaps from the east, violent wind blasts from at the west, and of course violent icy blasts from the north, Tenerife’s much more sensible latitude provided the ideal tonic for winter blues.

While the dozen or so reef breaks dotted along a mile-long stretch of coast on the island’s SW shore are usually home to locals on the peak and surf schools in the shallows, last week they played host to the finest surfers from Europe and further afield.

When all was said and done, Guadeloupe’s Tim Bisso took out the Men’s division and Tenerife local Daniela Boldini the Women’s, and your correspondent was left with a number of key findings to muse over. 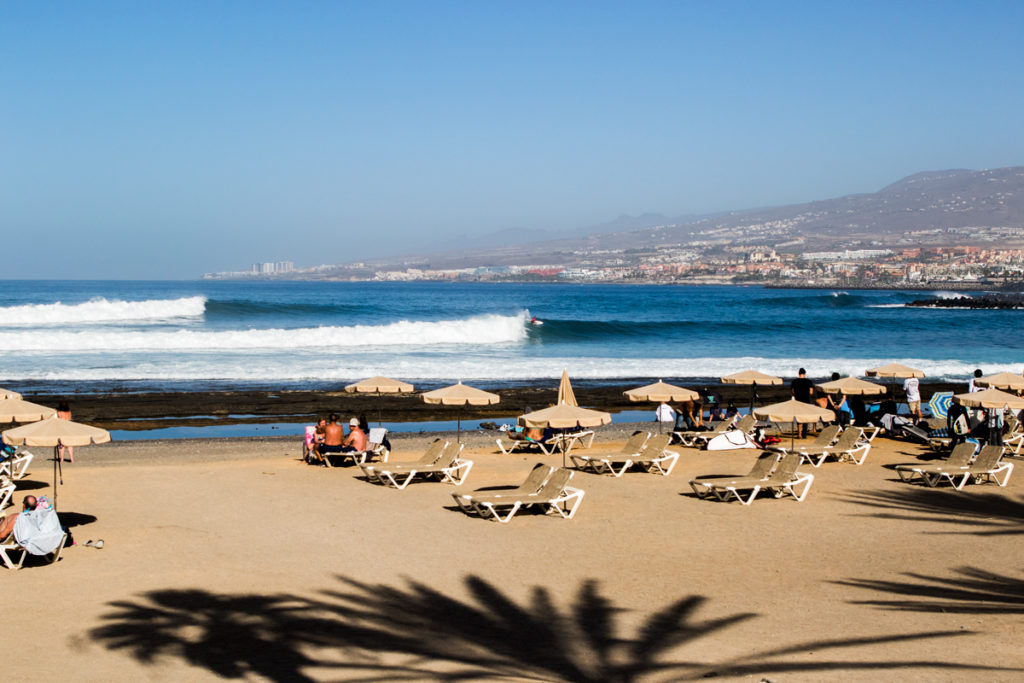 This is ‘Spanish left’ doing its thing on day 2 of the comp. What Las Americas lacks in creative wave names it makes up for in palm trees and sunshine. Photo @lugarts

Blue water and short arm wetsuits are the new 2ft pointbreak in front of a snow capped mountain. While #nopalmtrees hashtag and Shackleton beards and 7 grand’s of GoreTex may be what the surf photogs are relentlessly trying to peddle to us as the modern surf aspiration, what we really want of course is the total opposite.

The balmy blue brine of the Canaries, especially at the more developed parts of the coast such as Las Americas, is one reason all the best views are from the water’s edge looking seaward.

Once at sea it’s open eye duck dives, naked sleeves, bootless extremities (shorts n’ a top for the slightly overweight, or Rafael Texiera and Adrien Toyon from the competitors. Both lost first heat, but not due to warmth-related issues).

The point is that south is still the new south, and a week long surf trip to the Canaries involving vitamin D, maybe a couple of sweet time tunnels, cold al fresco lager and general solar powered revelry can cost you about the same as a stale sandwich from an Icelandic petrol station. 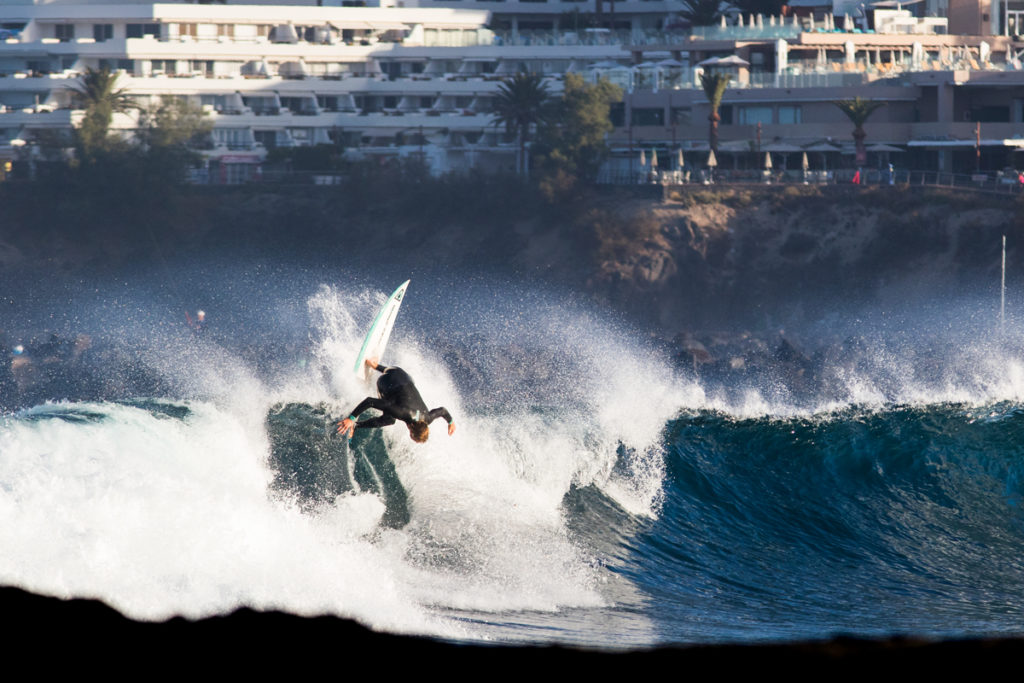 The drugs might work. The forecasts? Not so much. It’s good to know that forecasts, for all their general accuracy in most surf locales, are still decidedly patchy in certain parts, in a good way.

Last year the event showed between flat and 1ft on the forecasts, and yet delivered consistent head high surf. There I was, assuming the event would be off and thus was planning my days getting a pixelated rat smoking a bong tattoo on one bicep and Made in Pontefract on the other, in attempt to fit in with my compatriots in Las Americas.

Alas, the event was on every day and I ended up working, instead. This year, the swell was forecast to peak at 1-2ft, which, generally speaking, would be stay-in-bed type fare in most reefbreak locations.

Fortunately, things work a little differently in the Fortunate Isles, and a 1-2ft forecast means 5ft bombers at the sucky reef breaks along the Las Americas stretch.

In these post rise-of-the-machine days, of horizontal time, endless information overload, it’s good to know the ol’ fashioned show up and have a look still trumps the algorithms. 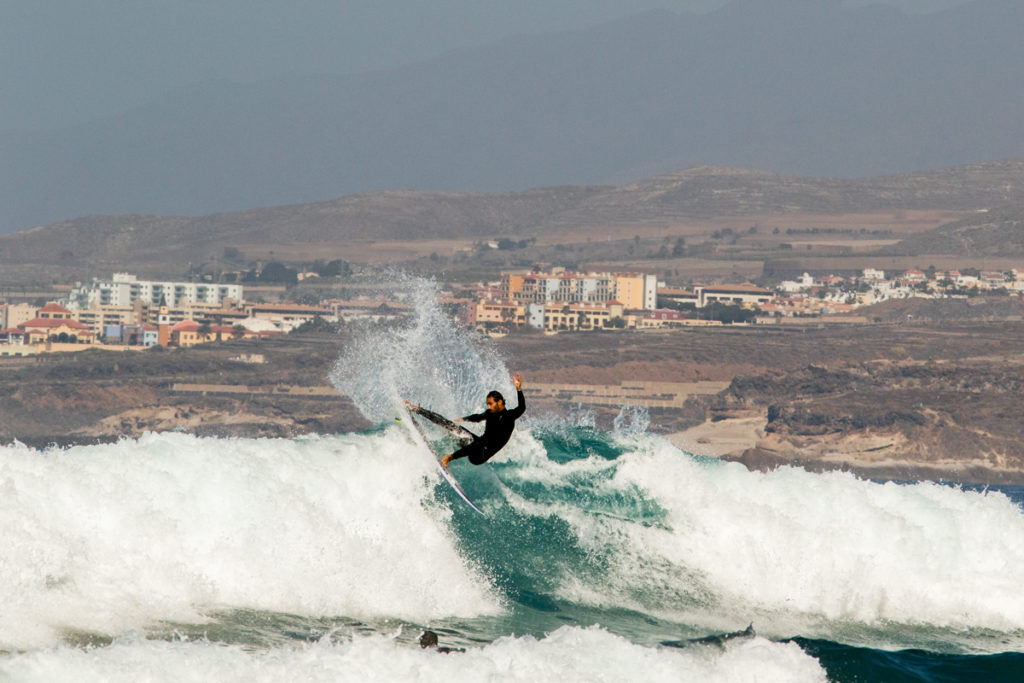 The changing of the guard, according to Bob Dylan at least, took 16 years.

“I don’t need your organisation,

I’ve shined your shoes, I’ve moved your mountains and marked your cards,

But Eden is burning, either getting ready for elimination

Or else your hearts must have the courage for the changing of the guards.”

Scholars have proven that while Dylan wasn’t directly referring to the European QS in what was arguably his finest lyric writing for years (the track was released in ’78), he might as well have been.

Whether the established order are just too good a vintage to retire, or whether the young pretenders don’t have the stomach to do what needs to be done for the good of the herd, the likes of Lipke, Gonzalez, Zubizarreta et al. are still as relevant as ever.

Sure, results didn’t come their way this time out, but purely based on performances, they’re still surfing every bit as well as anything else out there.

At some point the baton change over will happen of course, and barring any running out of lane, the naughties golden generation will be but a fond memory. But for now, they’re still ripping. Paul César Distinguin is the best looking surfer in the world. Is it just me, or does French losing finalist PC look like he should be playing a Parisian detective in a crime thriller?

Certainly he’s smoking a Gauloise and drinking one of those really small glasses of rouge in a corner bistro, brooding smokily over a troublesome case. Maybe mistresses, some blonde, some brunette, all beautiful, know to call him on the bistro’s payphone at certain times, day and night.

He bends the law but always comes good, looks after his informants (Tim Bisso) in a kind of paternal way, occasionally stops on the way home to rough up a mean boss taking advantage of hard working low paid women, and looks even more dreamboat when he’s mad.

What’s that? Just me? 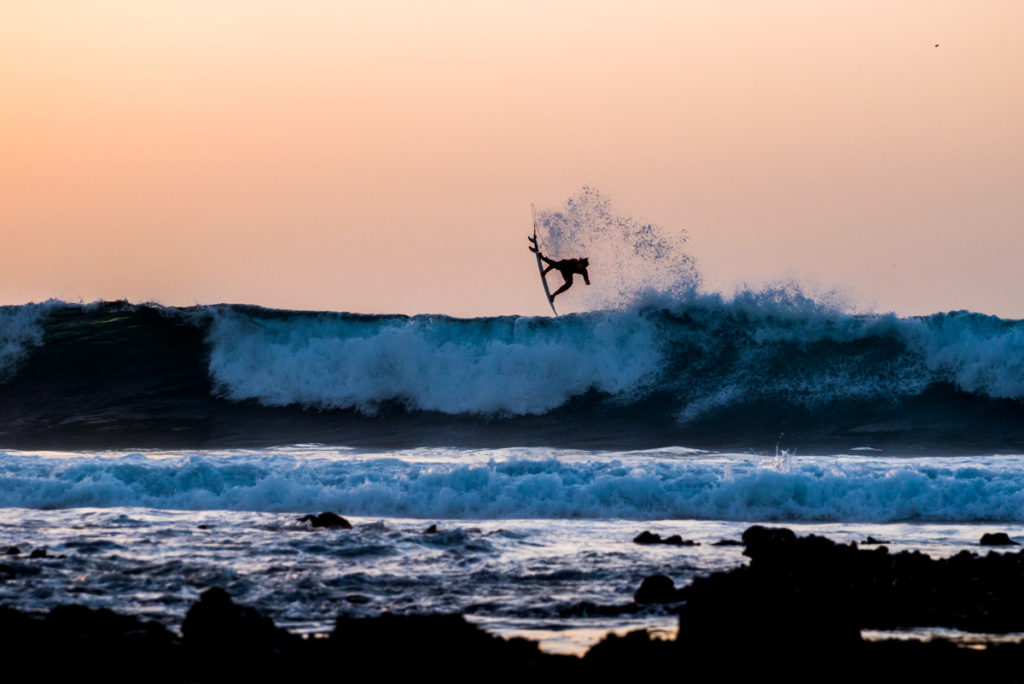 The wage crisis is real. Millennials, it’s said, are still suffering from the 2008 financial crisis in terms of wages in real terms. They’re still getting stung, paying the price for the recklessness of the casino bankers and their evil subprime schemes.

Millennial pro surfers, it seems, are no exception. Because as surfing moves with the times and now pays equal prize money for men and women, what that means in real terms at the QS1500 level is that rather than put the women’s prize money up (from $5000), what they instead did is put the men’s prize money down to match that (from $10,000). Bummer.

Further complicating the situation is the fact that almost nobody is sponsored anymore, at least properly. Semifinalist Luca Mesinas may have Quiksilver Peru helping make ends meet, but nose stickers from surf brands were pretty rare fare among quarterfinalists and onwards in both men’s and women’s.

With the likes of Vasco Rebeiro and his Red Bull backing making him very much the exception, it’s had to imagine how many folk are earning a living wage from sponsorships in 2019.

Fortunately, drinking away the sorrows of the harsh fiscal reality of our times can be at least be done inexpensively in Playa de la Americas, where a pint of lager costs €1.50 and happy hour goes from 8pm till 2am.