Home » The History Of The Pigdog- Who Invented It & Where Does The Name Come From?

The History Of The Pigdog- Who Invented It & Where Does The Name Come From?

Ever wondered why it's called the pigdog, and who first utilised it for backhand tube riding?

Pigdog is one of those words in surfing vernacular that draws a funny look when uttered around anyone unfamiliar with its meaning.

The rest of us generally just take the weirdness of the word for granted, but have you ever stopped and wondered where both the term and the approach to back hand tube riding it describes actually came from?

The term ‘pigdog’ existed, long before it was used by surfers, in Aussie hunting slang to describe the fierce breeds of dog, including pit bulls and bull terriers, used for sniffing out wild boar in the bush.

In it’s earliest forms drop knee tube riding involved a sturdy crouch, with the head down and the outside hand firmly gripping the rail, creating a stance that resembled that of a hunting dog dragging a wild pig through the undergrowth. Taj Burrow also claims in his ‘Book of hot surfing’ that the bared teeth often assumed by surfers as they muscle through a tube also add to the resemblance.

The nuanced history of the stance’s creation begins with John Peck, who was the first regular footer to ride through the barrel at Pipeline using a never seen before crouched grab rail stance in 1963.

However, the pigdog as we know it today was not seen until the early 80’s when Hawaiian tube specialist Dane Kealoha began experimenting with getting deeper in the barrel on his backhand by crouching and leaning forward with the back knee dropped. The stance was originally known as the ‘tripod’ or the lay-forward’, but these monikers quickly gave way to the more catchy ‘pigdog’ as the approach gained popularity throughout the early 80’s. 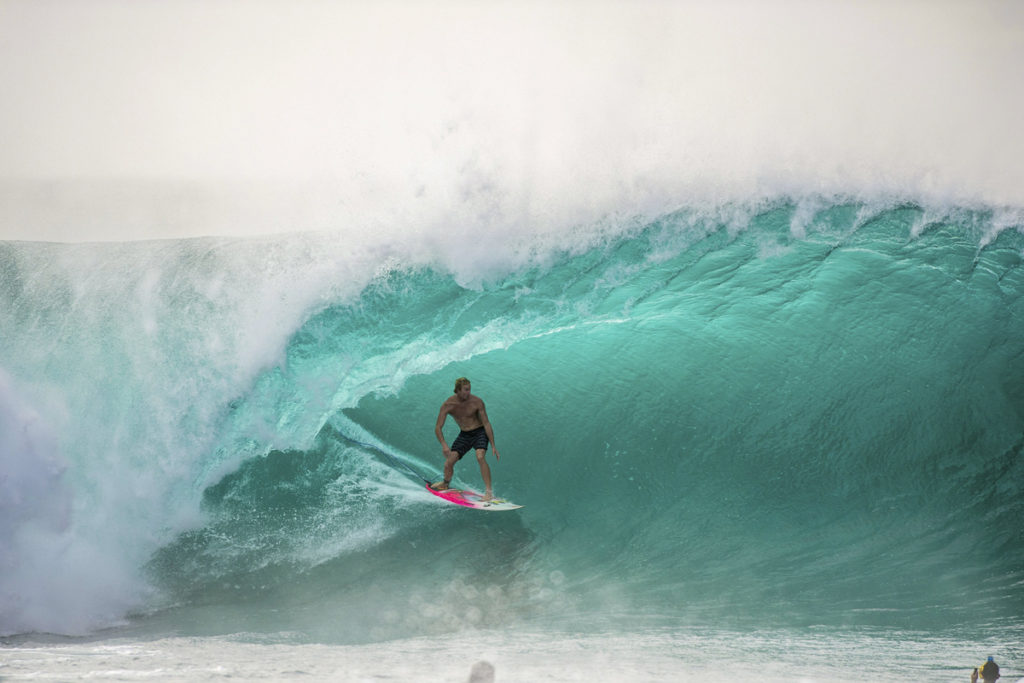 JOB demonstrating the upright approach that has surpassed pigdogging as the stance of choice for many of the world’s best backside barrel riders. Photo Trevor Moran / Red Bull

The pigdog evolved constantly throughout the subsequent years with notable proponents including Shane Beschen, Kelly Slater and The Irons Brothers, who adapted it by moving their hands up their boards and assuming a more liquid, responsive stance with their bodies. The trailing hand and the bumdrag were introduced to control speed, and allow the surfers to stall for even deeper barrels.

Nowadays the pigdog is often combined with crouched hands free speed pumps to navigate faster sections and in some cases, it has been removed all together, giving way to the bolt upright body twist, also pioneered by Dorian, Andy Irons and Kelly Slater and utilised increasingly today by the very best backhand tube riders.