[As Wavelength celebrates its 40th birthday in 2021, we revisit at some of the more colourful chapters in European surfing history.]

How an era-straddling celebration of cross-over boardsport culture – and a Daily Telegraph kiss n’ tell of it – marked the beginning of the end surfing’s vaunted age of debauchery.

“So now, less than five years later, you can go up on a steep hill in Las Vegas and look West, and with the right kind of eyes you can almost see the high-water mark—that place where the wave finally broke and rolled back.”

Hunter S knew it’s easier to mark the demise of some eras than others. In this case, the hippies of San Fran. Defining the end of an era, perhaps with a lyrical flourish and degree of abstract symbolism is usually easier, and always more satisfying than the beginning.

The last throws of an epoch are often visually dramatic, involving sudden movement, an agent of involuntary displacement, a violent vector.

The volcano spewing out sooty earthen innards, blocking the sun for a hundred thousand years.

The imminent meteor strike flashing across the moist iris reflection of a brontosaurus munching gormlessly on primeval pond bryophyta.

Or perhaps images of unthinkable human horrors, live TV of the planes going into the buildings, the mushroom cloud captured by B-29 fuselage Bolex from the tropopause over the Sea of Japan.

Such moments in time herald paradigm shifts animal, vegetable, mineral – cultural too. A lateral leap on a bell shape population curve, sublimation from solid state to gaseous, a mutinous scuttling on sea of change. When the music stops and lights go on, some inevitably, are caught with their pants down.

As for surf culture’s age of rock n’ roll looseness, apparently pursued with more resources and energy than the waves themselves, it held out considerably longer than its Baby Boomer protagonists’ knees and backs.

Still, at some point early in the 21st century, it too would succumb.

Professional surfing’s transition to a more clean cut, nominatively accurate endeavour might have been more evolution rather than revolution, more trickle down, nuance, diffuse.

But there’s also an argument to say the death knell came on an SNCF night train charted by Na Pali SARL – better known as Quiksilver Europe – hurtling across France’s Massif Central in the darkness in early March 2002. 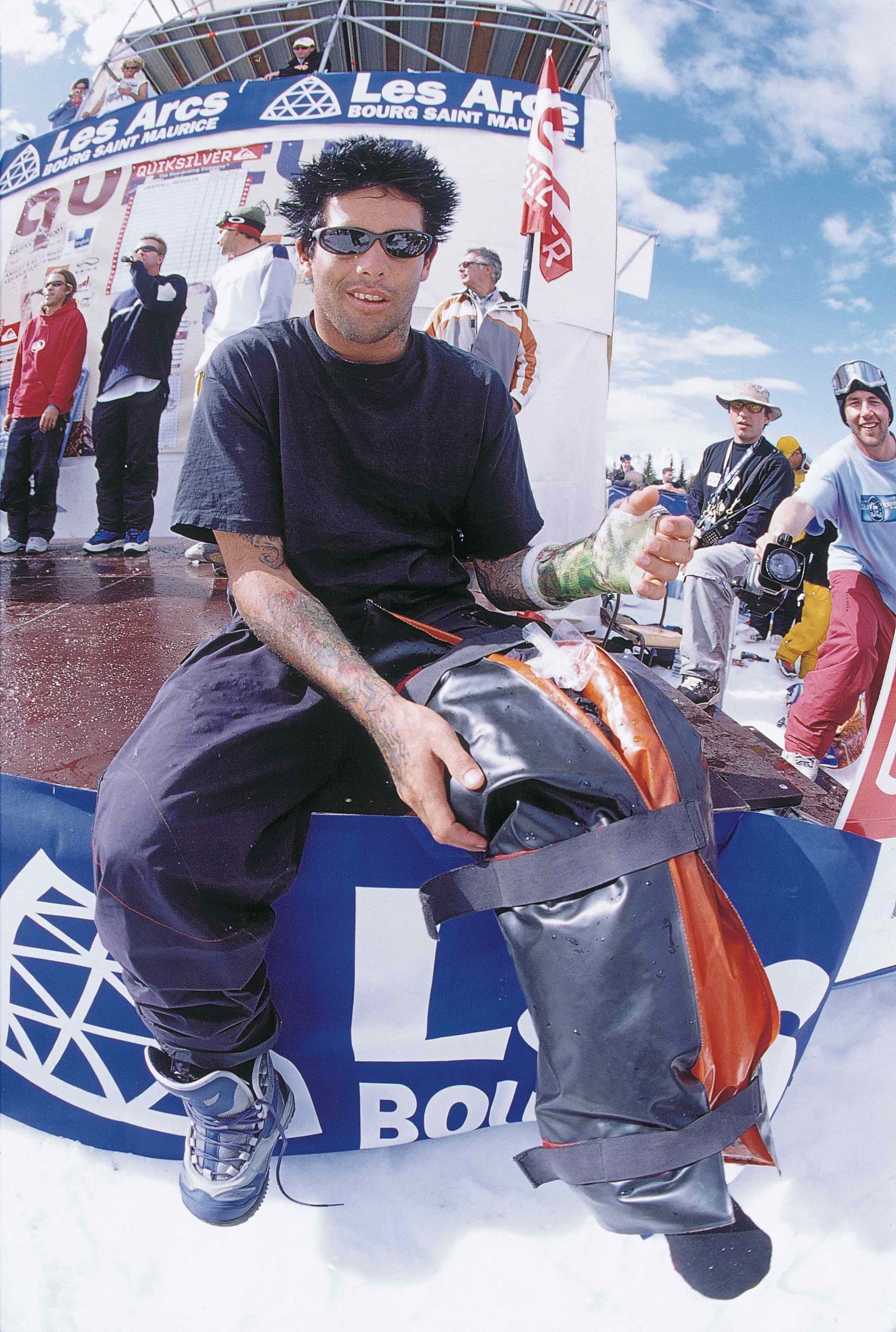 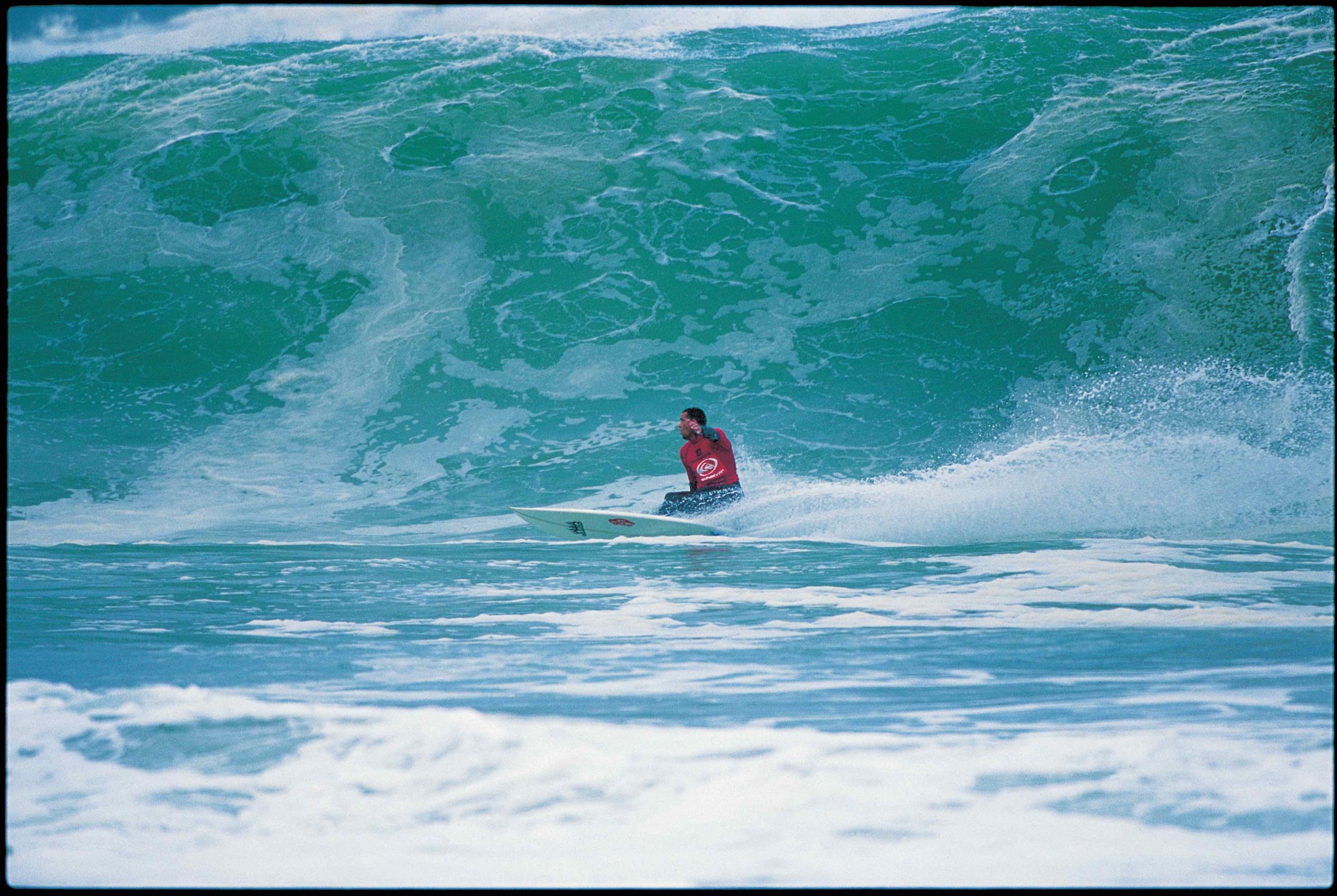 Christian Fletcher, anti-hero for the ages went at it hard in all Quik Cup disciplines. (left) Broken bones but refused to get a cast until after his final run (right) Anglet, just after the cig break jetty jump off.

Quiksilver’s multi-boardsport competition the Quik Cup, started in the 90’s as a celebration of the brand’s mountain/wave philosophy, a life imitates logo rendition of its cresting wave and snow capped mountain iconography.

In the early days of the event, surfers like Elko, RCJ, Pagey and Carwyn as well as nascent cross over sea/snow pros blazed the multi-format trail, alongside brand dignitaries like Robbie Naish, Hakman, even the great Miki Dora.

Waves were shredded in Anglet, then the high spirited party went up the hill to La Mongie in the Pyrenees. As the leading sideways stanced performers of the era demonstrated, apres ski needn’t necessarily wait until after.

Wavelength‘s own print coverage of the inaugural event in ’93 included a photo of a stocky, naked man wrapped in clingfilm on the drag lift, very much embodying the spirit of things.

If board edge had happened to slice todger in a lift dismount mishap, you’d expect the proverbial stick of rock concentric motif with ‘If you can’t rock n’ roll…’ running through the flesh. As it happens, today he’s the global general manager of Quiksilver International.

“The trouble was the Aussies kept winning,” remembers Dave Mailman, then Quik marketing exec. “America didn’t really care about semi-obscure surf rippers who could snowboard. We needed to attract the biggest stars. So we made it an invitational event instead of an open, and added skateboarding. That took it into a whole different realm.”

A custom built skate set up in Biarritz was added to the bill, the Pyrenees were swapped for the Alps. Invitees included global skate stars like Danny Way, Omar Hassan, a young Shaun White.

Alongside surf crossover OGs Nathan and Christian Fletcher and some of Europe’s top snow and skate performers in the mix, rather than ex-tour surfers past their best who could snowboard, a hand-picked selection of the most legit names in global ride culture resulted.

Quiksilver, for all their shortcomings, (“You guys are the fucken McDonald’s of surfing!” as snowboard legend Shaun Farmer heckled their tradeshow stand in Munich around the same time), can never be accused of being unambitious with marketing initiatives.

They sent the Indies Trader chugging literally around the world, stopping at ports with Boardriders stores for poster signings, discovering a few hundred surf spots along the way. They bravely attempted to herd pro surfing’s founding cats for the World Masters at Lafitenia, literally across the street from the office, to see if battle-hardened animals from the ’70s and ’80s were still full of piss and vinegar.

“It was absolute carnage,” remembers one local surfer of the Masters. “None of them had mellowed with age, they were animals. I remember one big wave legend pleading on behalf of another, “Please don’t give him any more, his eyeballs are bleeding.”

For the Quik Cup to step up, someone came up with the idea to charter a party train for the trip across France, from Biarritz to Bourg St Maurice in the Alps, to carry the entire Quik Cup circus, a loose mix of riders and their entourages, various industry bods, media and general good time seekers and facilitators. A baggy jean with hammer loop, trucker hat, puffy skate shoe festooned, cartoon weed cloud covered militia. The train happened to have a bar and disco compartment.

What, you ask, could possibly go wrong? 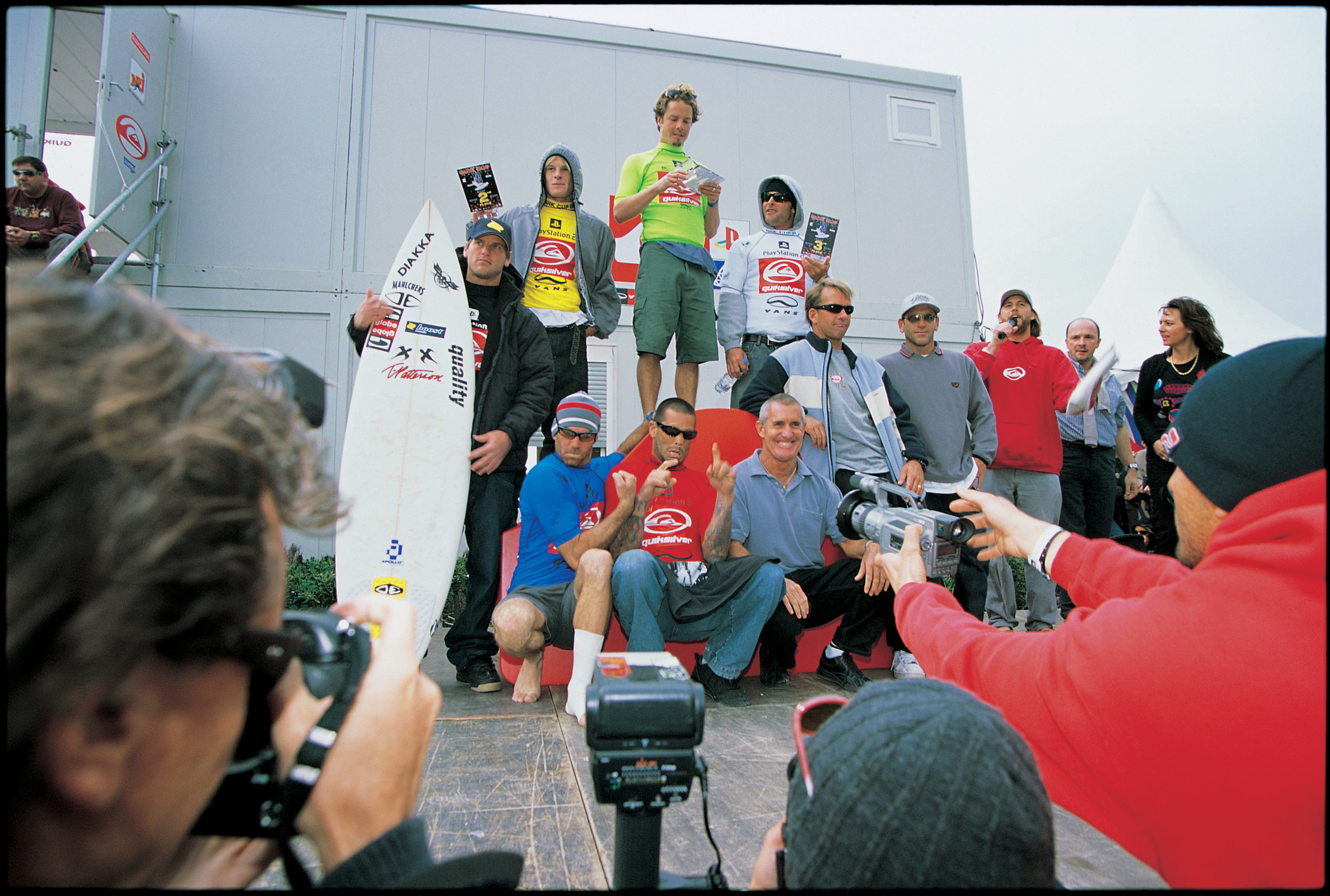 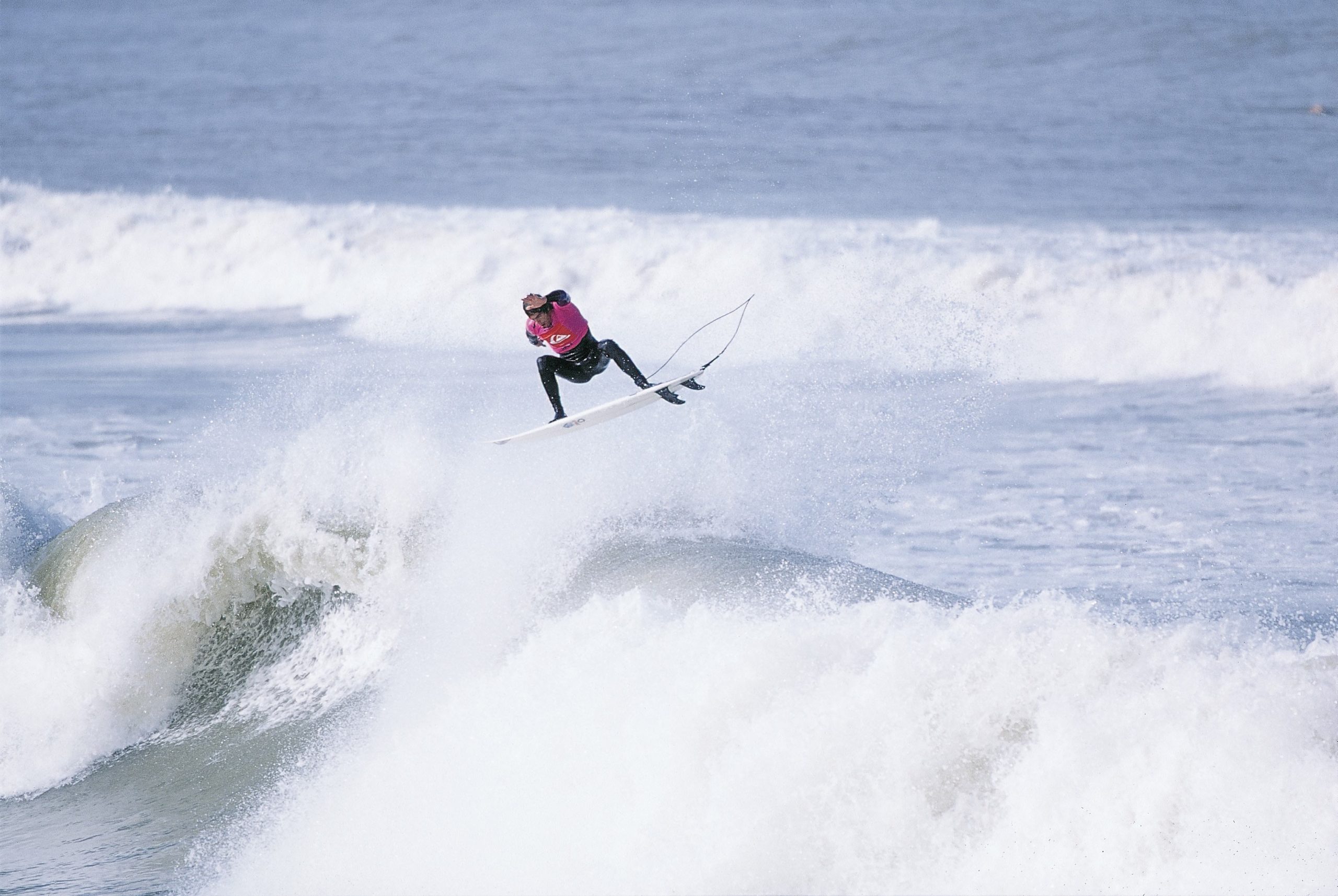 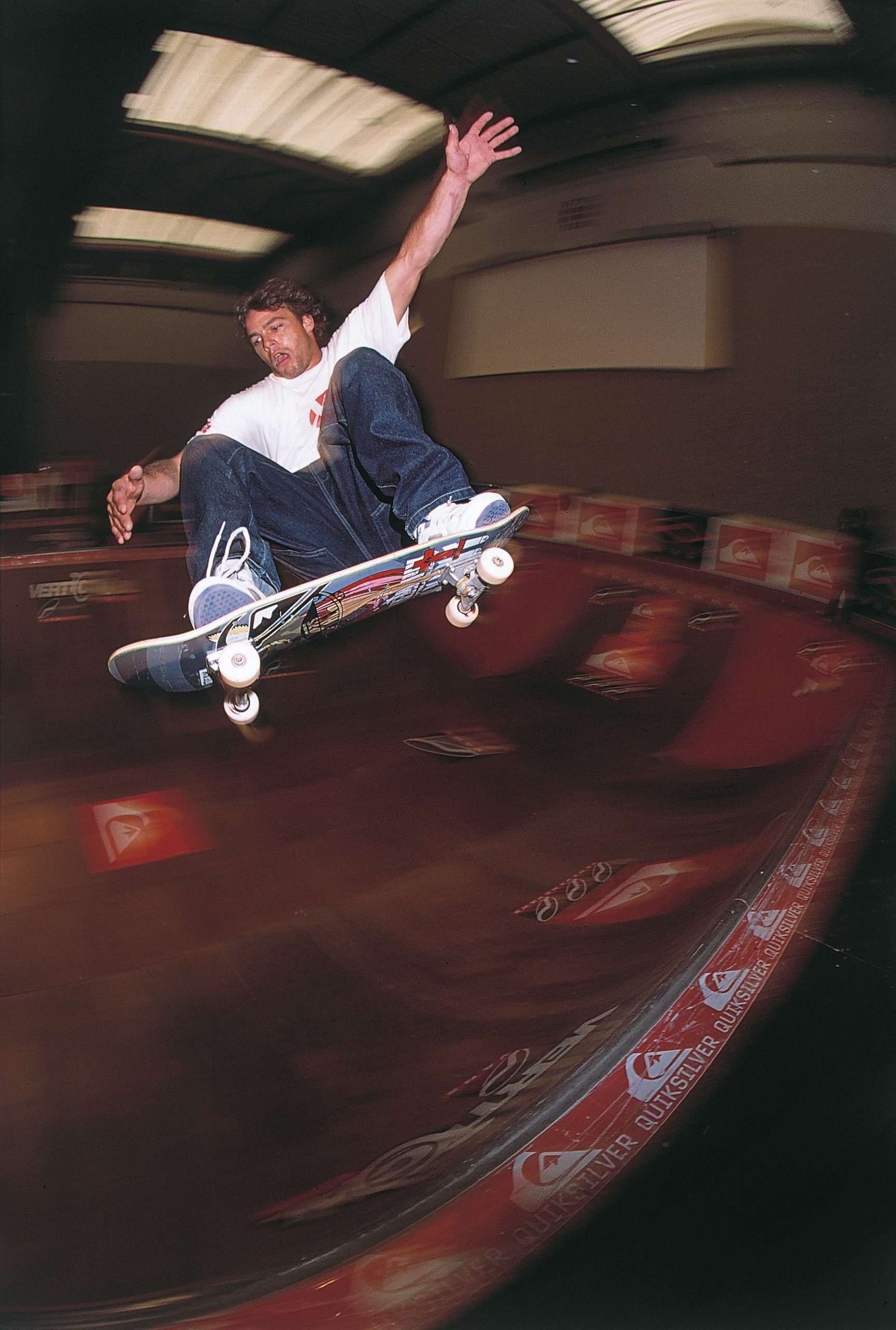 2001 winner Nathan Fletcher, in the brine and in the bowl. These days, athletes’ shelf lives are said to be greatly extended via stuff like ‘sports science’ ‘good diets’ and ‘yoga’. At Pipe in Jan 2021, he put forward an alternative thesis.

“The first year we got the train, the provisions got… overlooked,” remembers Dave. “We only had beer, no food or even water. We went around collecting change, then at a station, sprinted to the vending machines buying bottles of Coca Cola and Evian, before the train left, for Shaun White and Matthieu Crepel, who were underage, and to pick up a hundred pizzas.”

Miki Dora, who had the last carriage at the back of the train to himself, slinks out with his hood up to grab four large pizzas and melt back into his room, while a few carriages up, the Fletchers are leading a raucous belly sliding on beer soaked dancefloor competition. Meanwhile the Whites, Shaun plus mum, dad and sis are hoping for a good night’s sleep. Like a real life Wes Anderson pastiche, steeped in surf legend.

The surf was solid in 2002. White, who could surf pretty well but was still lightweight, got into difficulty in a fast rising swell. A jetski went over the falls in the shorebreak, White’s dad jumped in on a mal to save him from double ups chewing the Les Cavaliers jetty… then someone had to jump in to save him.

Meanwhile, Christian Fletcher came in after stomping a nosering rattling straight air to walk around and jump off the jetty rather than paddle through the beefy lines, smoking a Marlboro red as he strolled. It might be pro surfing’s first and only mid heat cigarette break.

In a worlds colliding moment, framing that scene with almost perfect ying/ yang visual dynamic, as the youth action sports megastar and poster child of corporate middle America is being dragged, flailing onto the boulders, Christian flicks the butt with a tattooed hand, times his leap and bones out a wide stanced acid drop over his head, back into the lineup to complete the circle.

“We struggled with media coverage compared to what we spent, it being a multisport event,” Dave explains. “We’d get a few pages, but the surf mags didn’t really want it, the snow and skate mags didn’t want it, only a few crossover titles gave it any love. It was probably a bit ahead of its time, pre-internet, pre-streaming, and we had to rely on outside media. So getting a journalist from the Daily Telegraph was something of a score, and he was afforded pretty unfiltered access.”

The paper’s reporter slipped into one competitor’s inner circle on the train journey, one who made no attempt to conceal his party prescriptions. The story wasn’t so much a betrayal of trust, more that the rider literally just didn’t give a fuck. The innuendo-laden exposé that ran in the Telegraph made for uncomfortable reading at head office.

The fallout from the story, alongside other, what was deemed unfavourable publicity, meant 2002 would be the last of the event, while a new direction was being sought more broadly across the sport at all levels.

Not long after, Neco Padaratz would be banned by ASP for failing a piss test, surfing needed to be seen to be doing something about cleaning up its act.

Rabbit Bartholomew would be replaced at the top of the sport’s governing body by Brodie Carr, recruited on the back of marketing basketball at the Sydney Olympics. It was part changing of the guard, part brick by brick restoration of the ramparts.

And while pro surfing is in some ways unrecognisable today, there’ll always those at the fringes faithful to its spirit of rebellion. Industry power brokers have seemingly rebounded from the sanitising movement, apparently realising that for every attempt to make it just like other sports, a little bit of its own unique magic is forever lost.

Meanwhile, there are whispers that after 20 years, the Quik Cup might even be staging a comeback. Perhaps more surprising is how relevant some of its principal cast members have remained, Nathan Fletcher’s monstrous air at Pipe early in 2021 demonstrating a beautiful refusal to go quietly, another moral victory for the non conformists.

Either that, or maybe just the rest of the world’s moved on. Big Pharma’s selling weed edibles, The Stones are great grandads, pop stars have face tattoos. Perhaps Big Surf doesn’t need to cower in perpetual fear that the Stasi are going to kick the door in and disappear it for smoking a doobie.

Anyway, at some point in the interim, a moment of spreadsheet reckoning has quantified the uncomfortable yet hardly earth-shattering truth; that when it comes to selling clothes to teenagers, it turns out surfing’s gym bores seem to be generating lower return on investment than the eyeball bleeders. 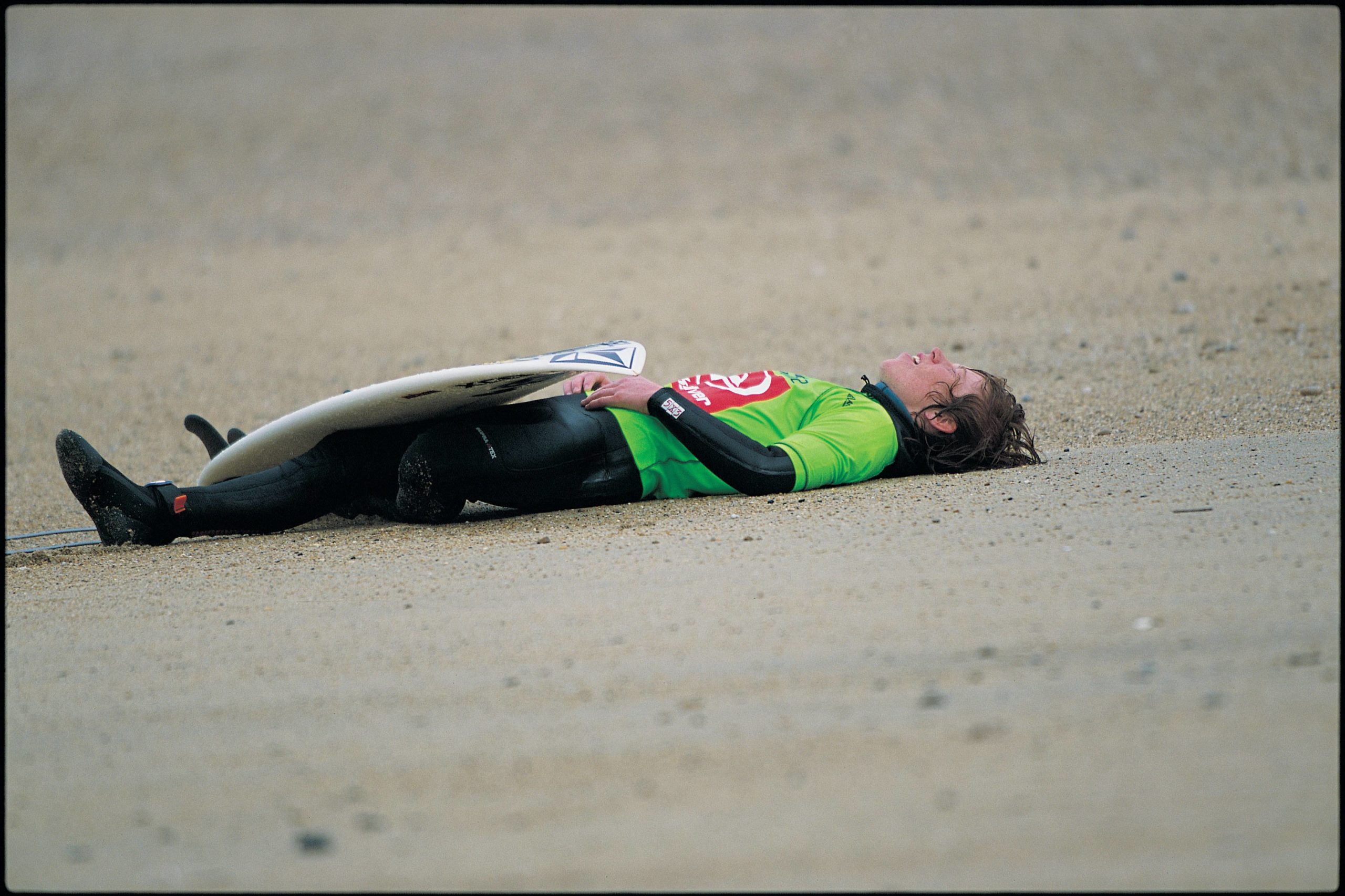 Locked Down But Not Out: Aritz Goes To Jail in Jo'Burg, 2007

[As Wavelength celebrates its 40th birthday in 2021, we revisit at some of the more colourful chapters in European surfing history.] Aritz Aranburu might be the hardest working man in [...]

The Stormrider Guide Europe, 1991: The Birth of European Surfing?

[As Wavelength celebrates its 40th birthday in 2021, we revisit at some of the more colourful chapters in European surfing history.] When was European surfing born? That is of course, a trick [...]

[As Wavelength celebrates its 40th birthday in 2021, we revisit at some of the more colourful chapters in European surfing history.] Essential accoutrements for the golden age of surf [...]