Today we’re kicking off a brand new series on Wavelength, shining a light on some of the most unique and colourful women’s surf crews around the world.  We’ll be checking in with the figures at the centre of these communities and finding out about the magic of their local spots and what makes the scene so special.

First up, three doggedly determined women from the coastal wilds of Scandinavia; Norway’s Lofoten Islands in the Arctic Circle, Klitmøller in Denmark and Varberg in Sweden. If your first thoughts are of small surf, howling onshores and 6mm’s, you’re only partially wrong. However, as we find out, the rawness of the region and the rare gifts delivered by the stormy waters of the North Sea make it a surf experience like no other. 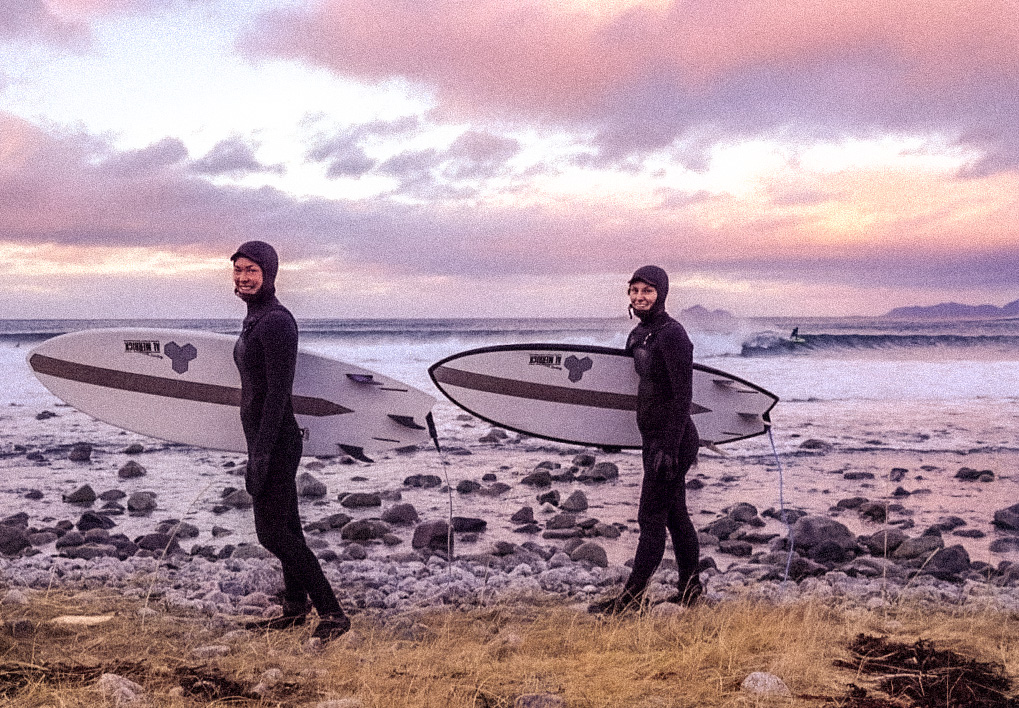 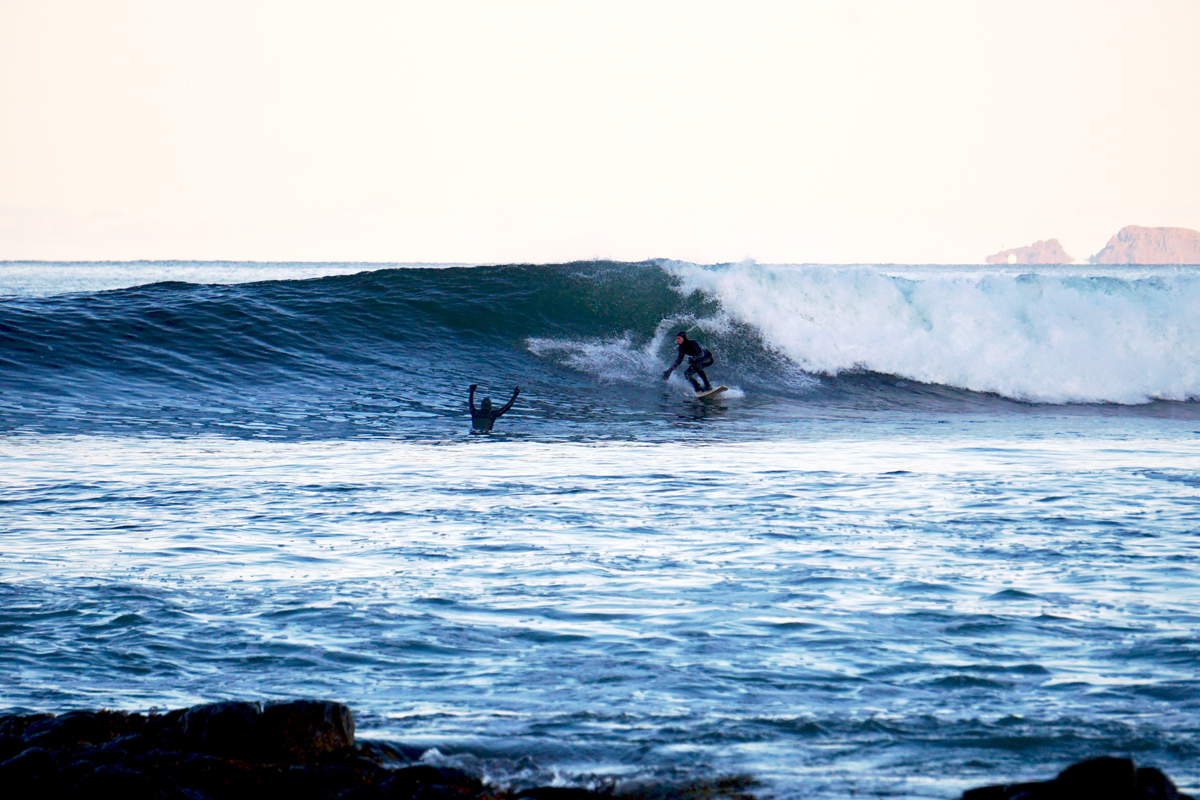 32-year-old Fredrikke Jerring runs Lofoten Apartments, an old fish factory turned vacation rental house in the heart of Lofoten, and has been capturing the celestial magic of surfing in the Arctic circle through her stunning photography for several years. The staggering and otherworldly beauty of the Lofoten Islands in Norway, an archipelago rich in mystical Viking history and heritage, 160 kilometres above the Arctic circle, has been capturing surfer’s imaginations for years. With radical mountain backdrops, deep fjords and the summer glow of the midnight sun, a burgeoning community of surfers, including many women, are making the most of Lofoten’s firing surf.

“To describe surfing in Arctic waters is difficult. It’s the most breath-taking scenery in the entire world. Majestic mountains straight into the sea, sunsets that are out of this world, or no sunsets at all during summer. Beautiful, pastel colours during winter, perfect offshore wind, or snowstorms with hail, -8°C, 15 s/m wind and you can’t feel your face. The waves are incredible and depending on the season, they can be everything from small and fun to 5 meters. It can be both super chill and mellow surf, as well as frozen hell on earth, but still worth it. I guess the surf here is just as dramatic as the scenery that surrounds you. 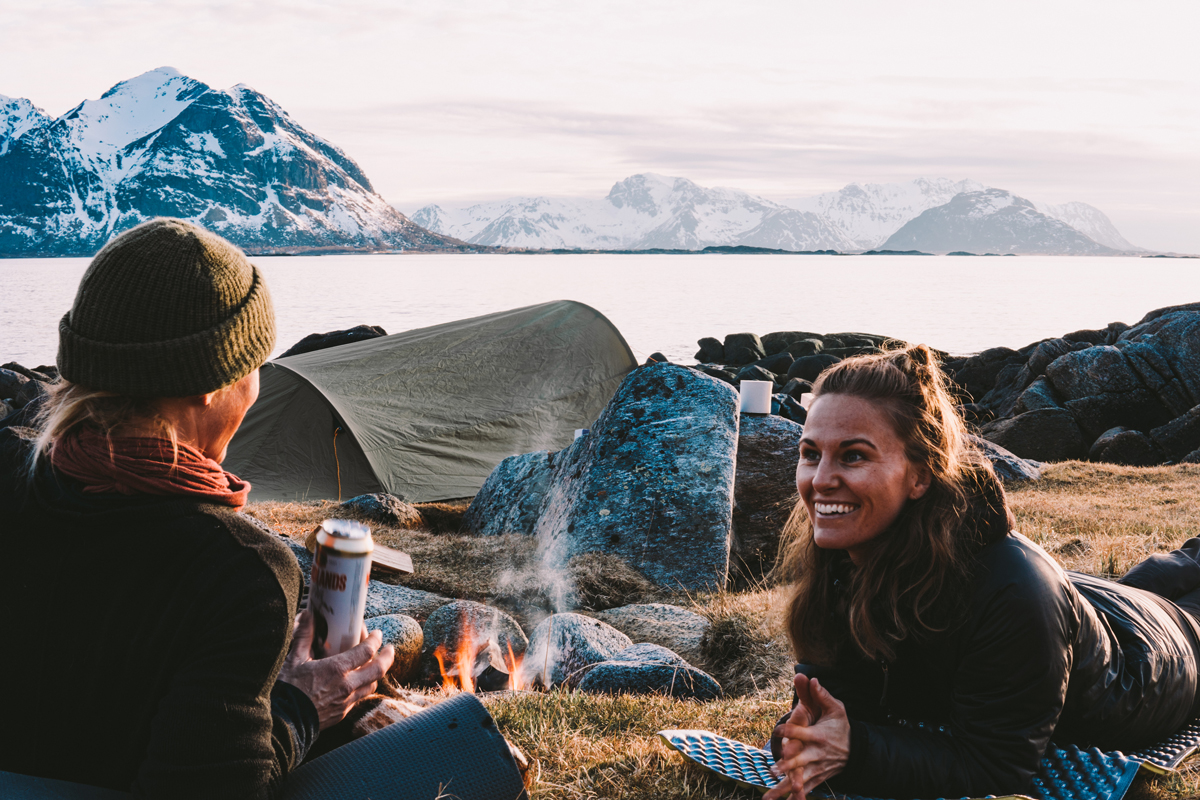 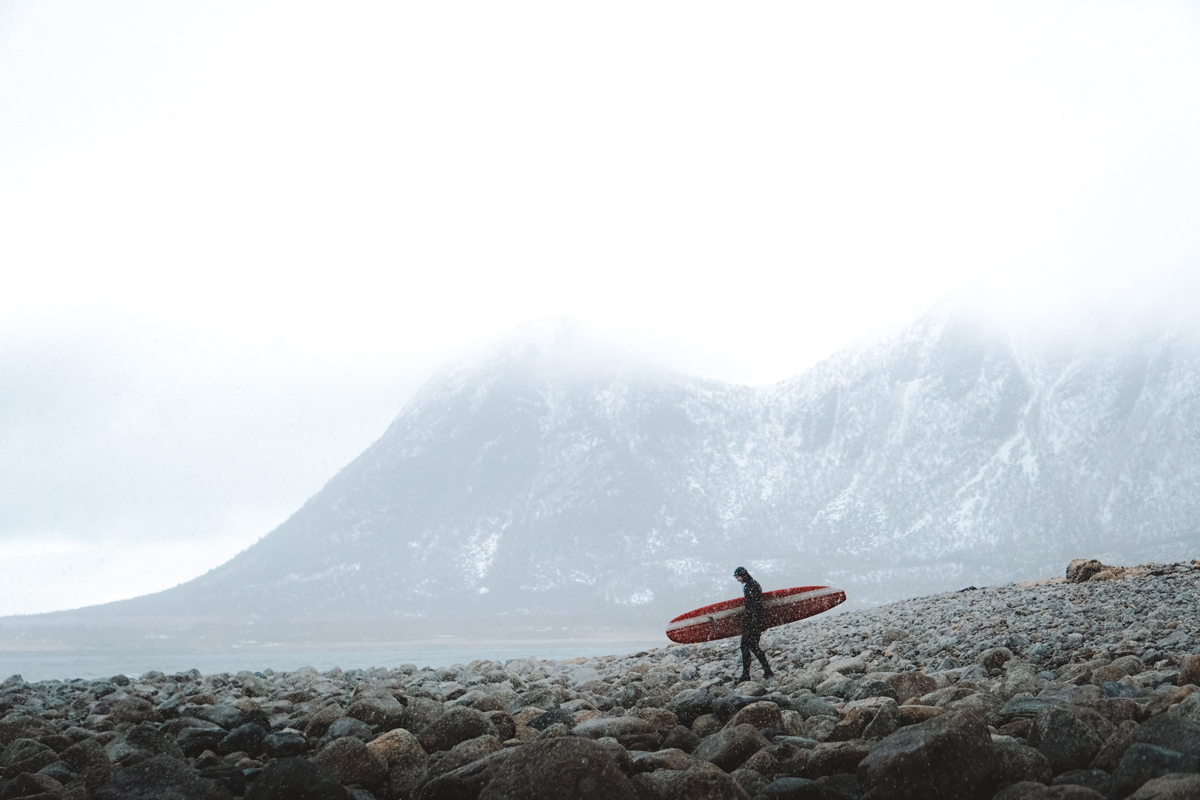 The surf in Lofoten really fires during the fall and continues throughout the winter season. I would say that the location itself makes it unique. Lofoten is pretty remote, which also means less people. It can be really cold. It can be snowing, hail, windy. Really, really, shitty weather and the line-up is full of really dedicated and supportive people. In December – January we barely have light, because we have something called Polar Night, where the sun doesn’t rise at all, which means the only daylight we have is twilight for a couple of hours. To drive out to Unstad, 1 hour each way, to surf in the dark basically, while the water hovers around 5°C, takes dedication and genuine joy for the sport. It sure as hell is easier to suck at something in sunny weather, tropical temperatures and a bikini. 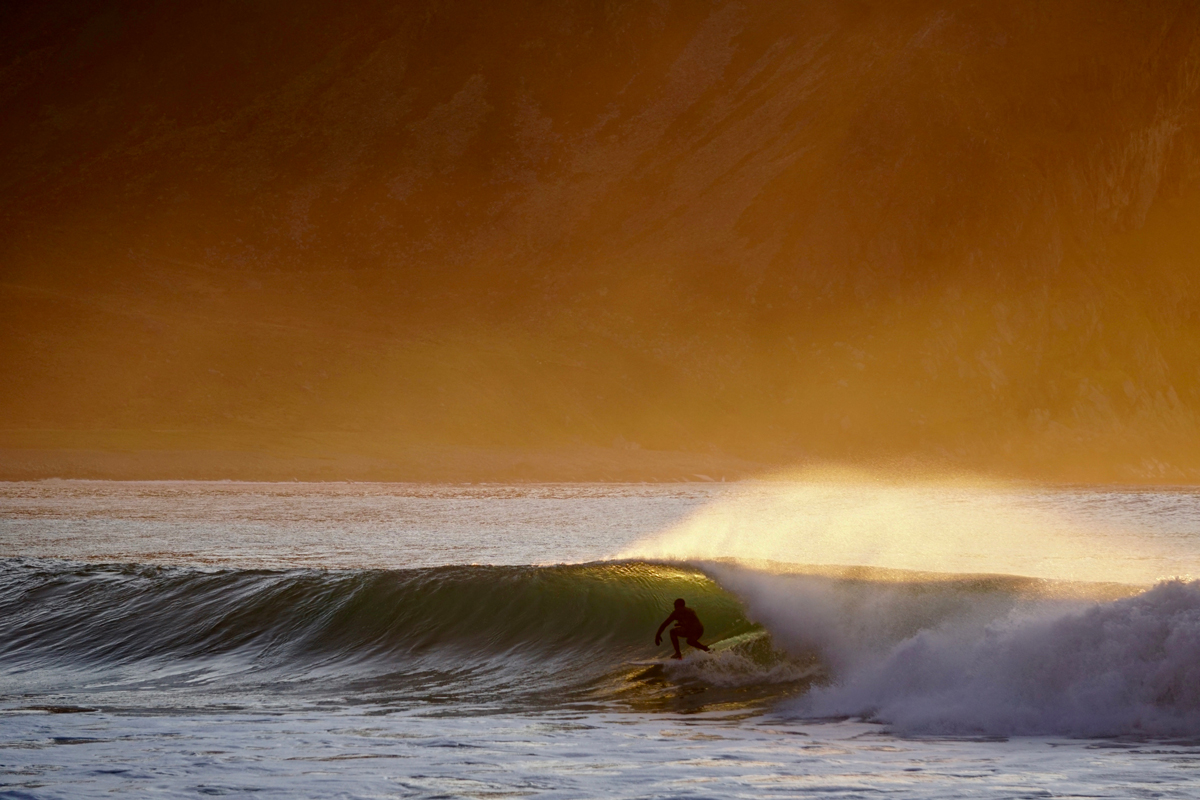 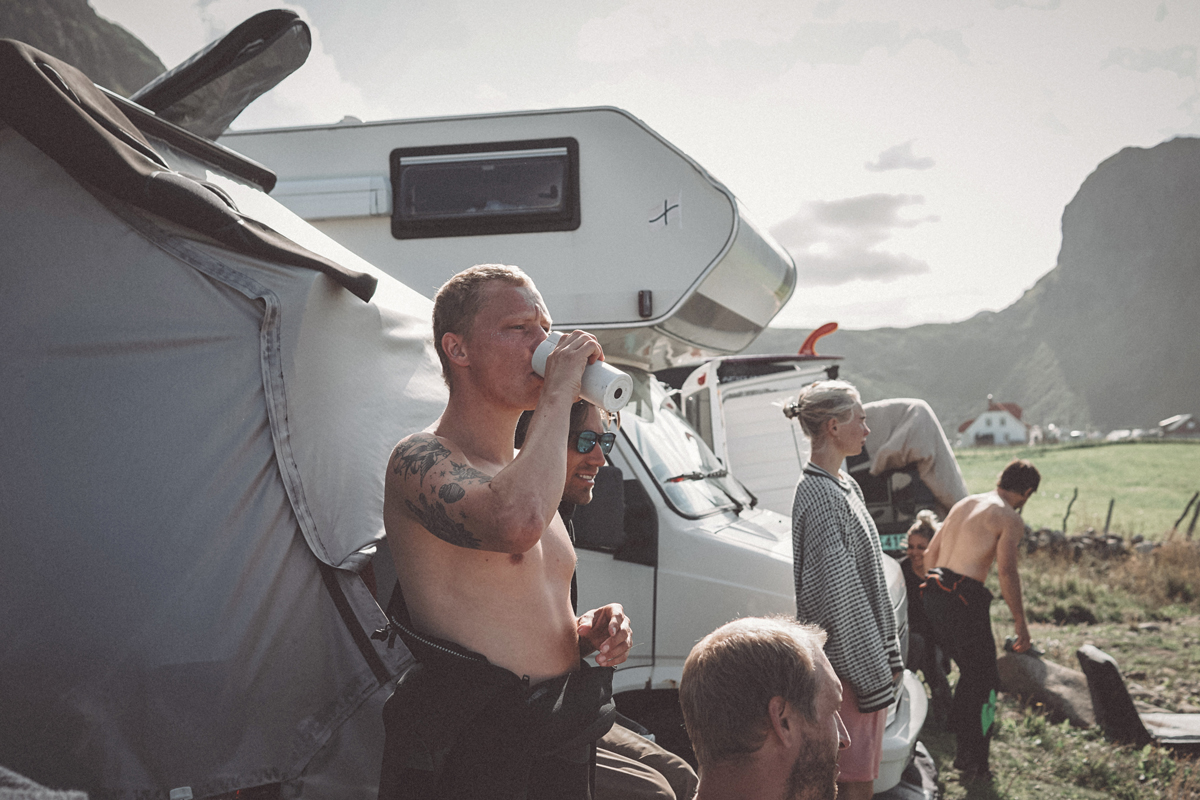 Our community of female surfers here is so cool! We are constantly growing in numbers. Several times in the water I look around, and we’re actually more women/girls than men. We have a messenger-thread called “surf n turf” with some of my closest lady friends who surf that includes 27 women, and that’s just us who live in Kabelvåg and Henningsvær. They’re badass women, some of them mothers, some single, some single mothers, who moved to Lofoten from all around the world to make a life for themselves that includes more than just working 9-5. 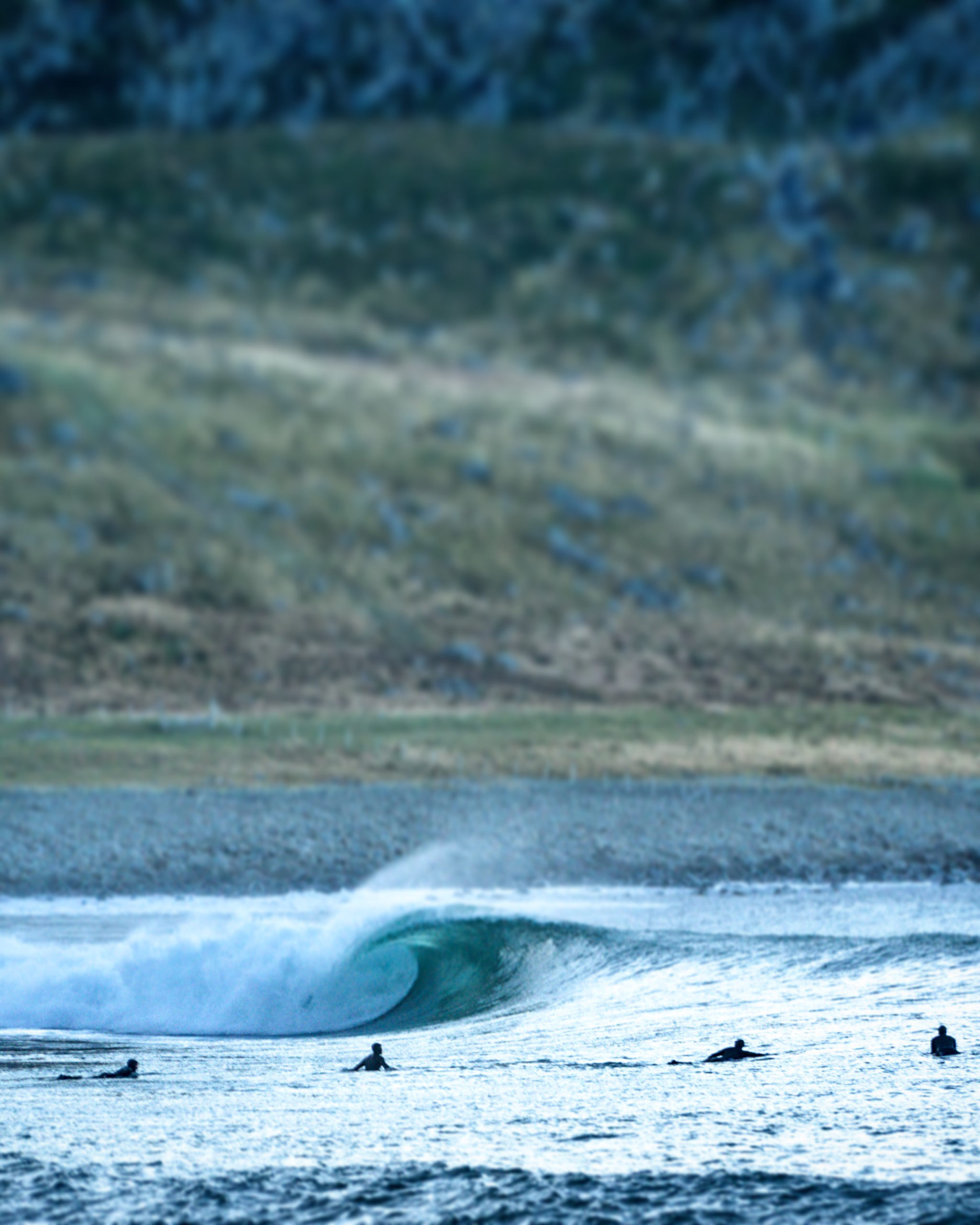 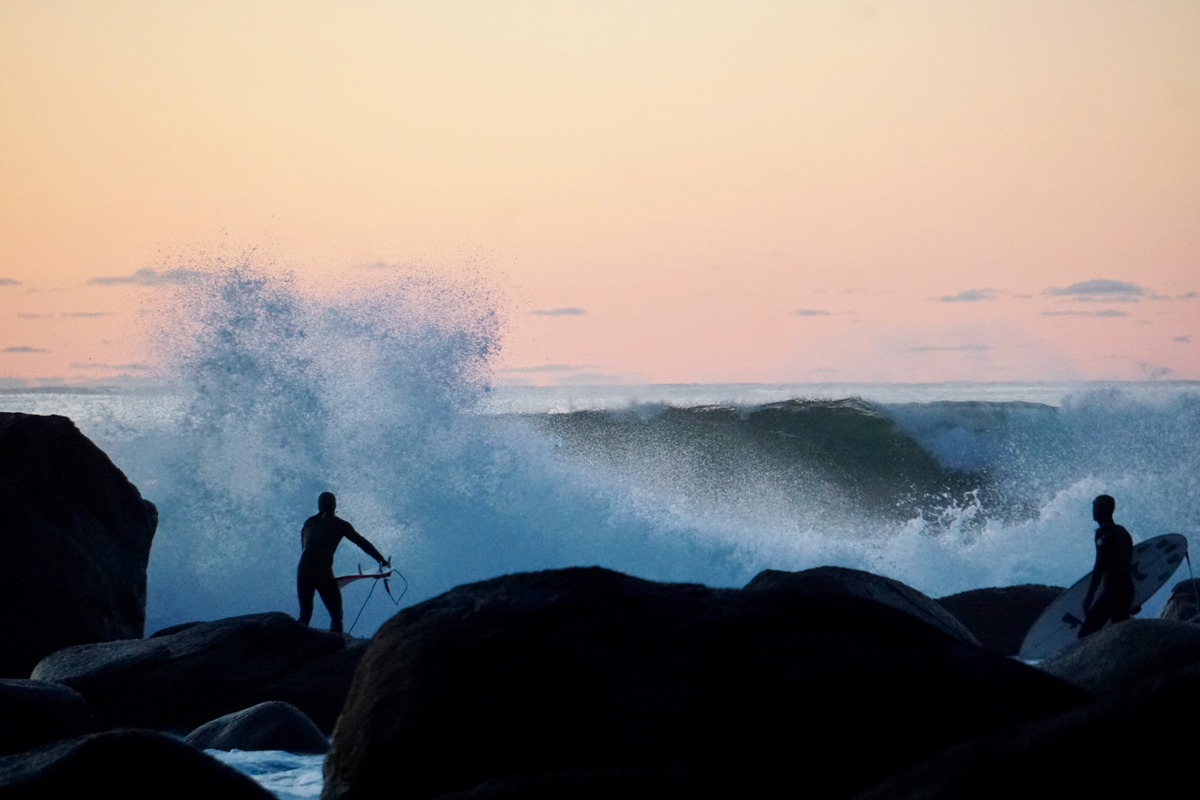 A special session for me was when the right side at Unstad was pumping. It was the most epic forecast you can think of: perfect SW swell, super clean, with 8ft waves. No wind, clear sky, the most beautiful sunset I’ve ever seen and barrels for everyone. There were maybe 10 people in the line-up, tops, and all of them friends. It was the type of day you remember for the rest of your life. And when I say barrels for everyone, I mean it, they came rolling in and it felt like it never ended.” 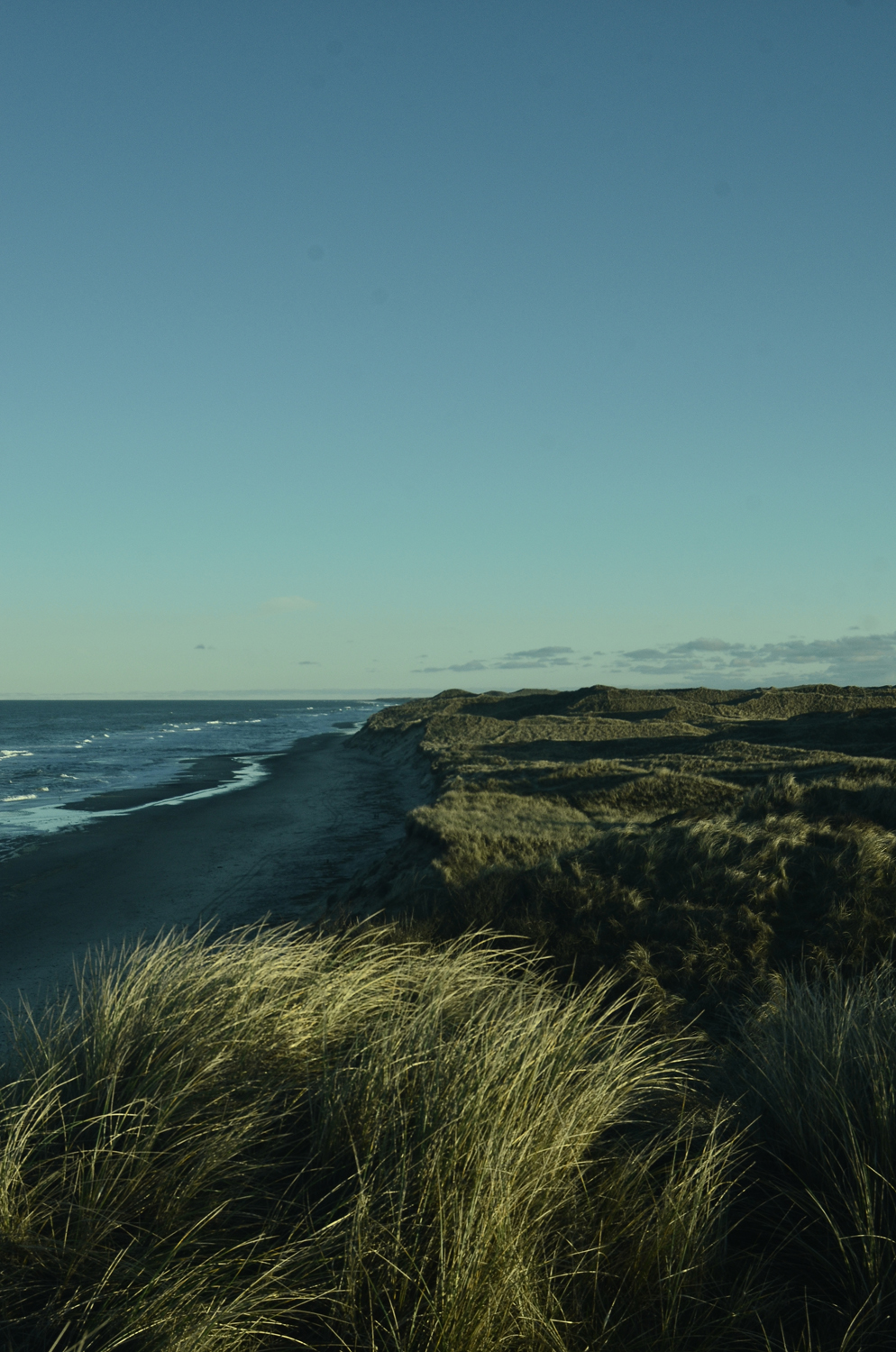 Sanna Hörvallius, the 27-year-old current Danish and Swedish surf champion, has been making Klitmøller, aka Denmark’s “Little Hawaii” home for the last year. Sanna grew up learning to surf in Hossegor where her aunt runs the Koala Surf House on La Gravière. Living in Klitmøller has been a departure from the sunny warm norm for Sanne, from surfing in warm water chasing ground swell to “getting in a 6mm wetsuit and praying for storm and bad weather!”

“Klitmøller is an old fishing village, and from the stories I have been told, when the surfers came, it created a sort of a territory war around the ocean between the fishermen and the surfers. And even further back in history, the German army had bunkers set up all along the coast line, which are still there to this day. The mixture of the war and the old fisherman stories makes this place more historical than what you really expect, you can almost feel it in the air, the trauma of the past. 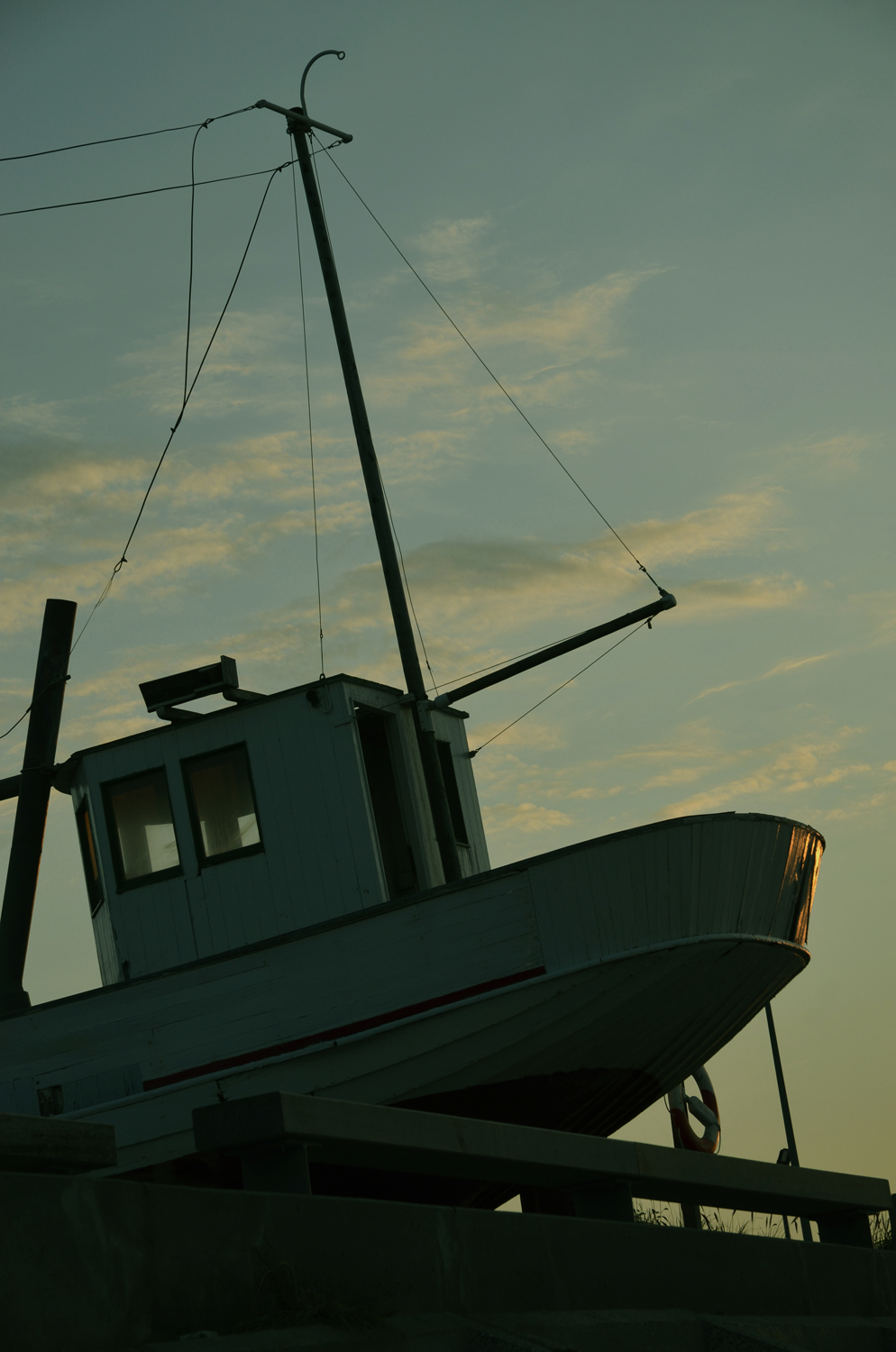 Cold, and full of waves, Klitmøller is the north land of the lefts. From beach breaks to swell direction-dependent reefs, if you’re lucky you can find sneaky wind-protected waves around a pier. The North Sea coast is full of moody weather, almost like a storm is always hanging around in the background. With a water temperature of around 5-7 C, and with the air temp being around -2 – + 2 C, you can easily slip away dreaming of feeling the sun on your skin and stroking your fingers in warm water. Yet, there is still something that keeps making us stay. If you really want to score around here, study the weather forecast, get in the car and go for a drive on strike missions. You really learn to appreciate every session so much more. 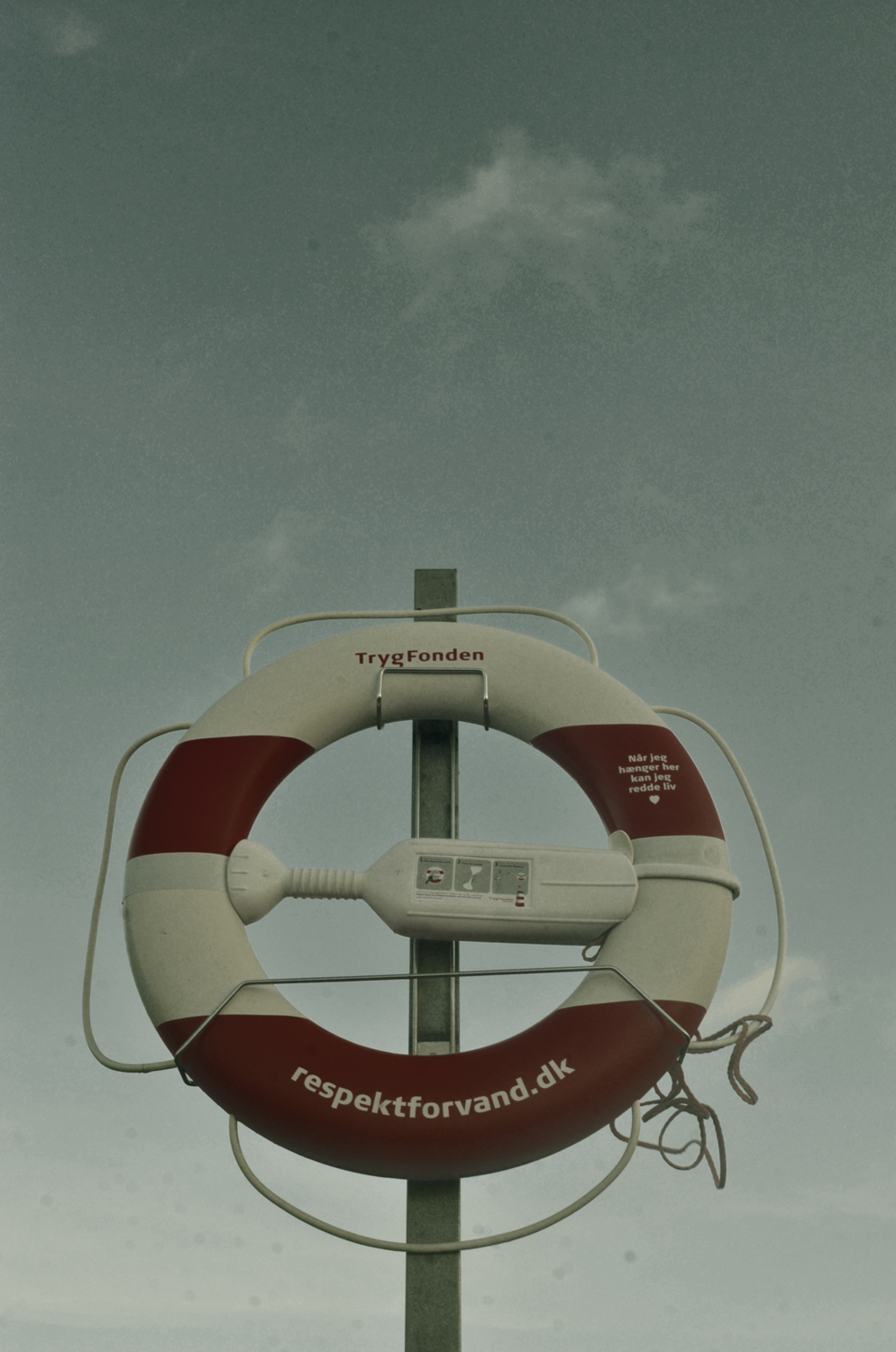 The women’s surf community in Klitmøller is a collective of strong-hearted women, many burning for the love of the North Sea, with a very creative and powerful atmosphere. There’s around 40-50 of them, and Klitmøller is not a big town. Most of us share an understanding of the importance of sustainability, working towards solutions for a better planet. Every day there is an update in the local Facebook chat, “Surfshieldmaiden”, created by one of the local shredders Vahine, welcoming new lady sliders into the community. You would never have to go surfing alone. 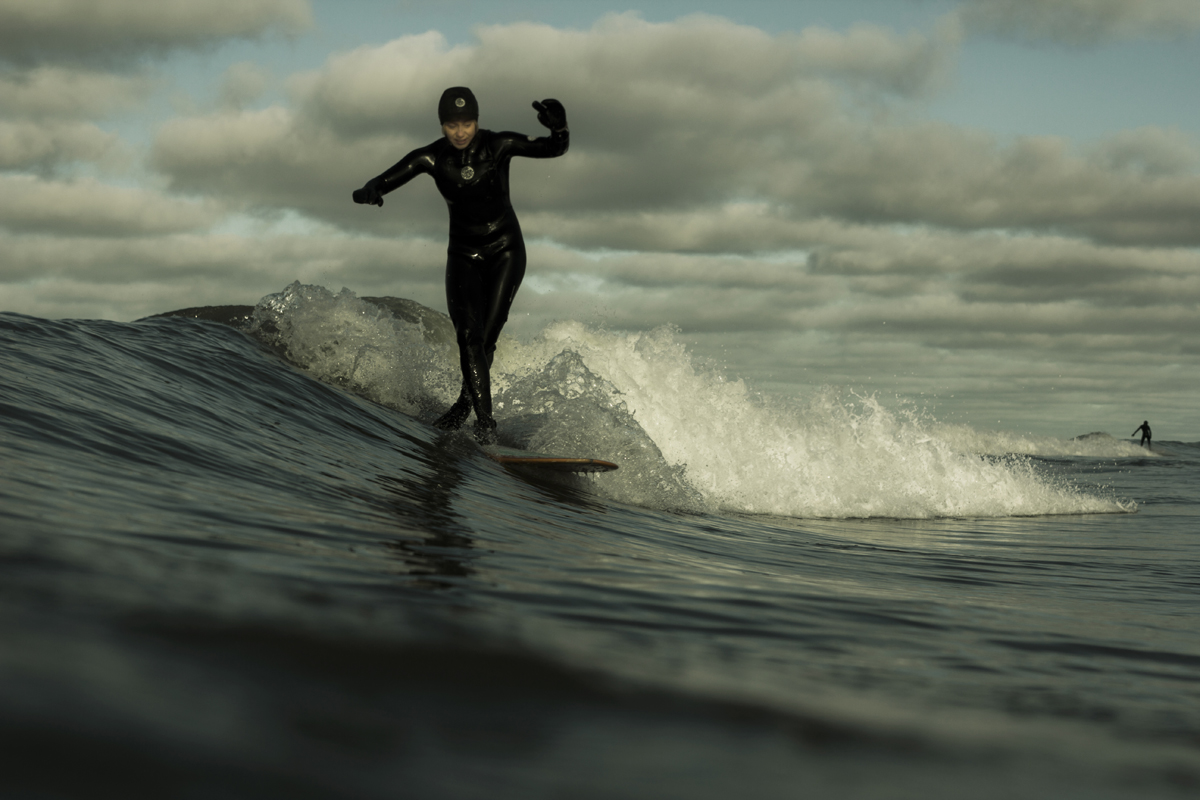 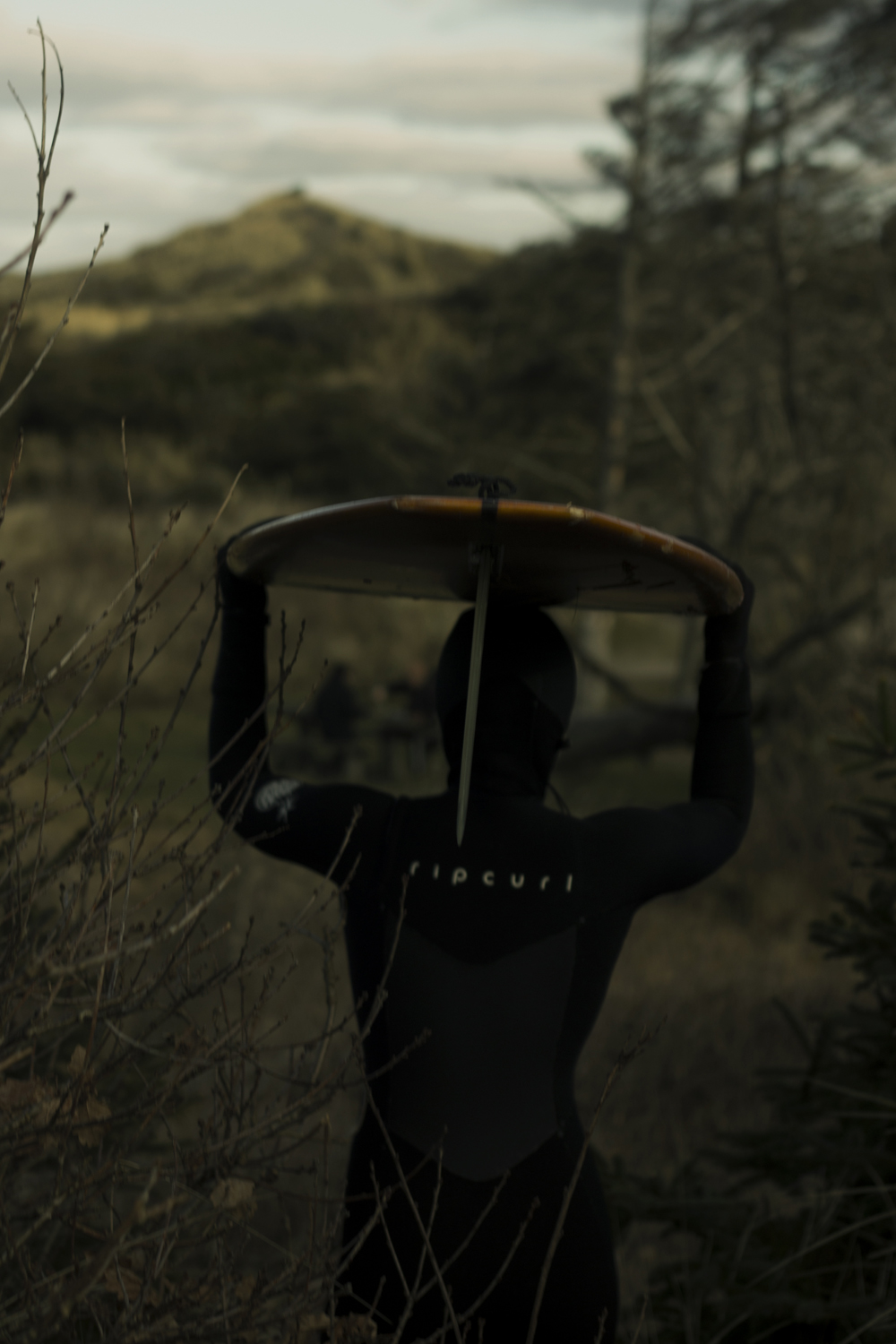 One amazing day I remember I was out at a break called “ The Barn”. I’d been watching a bank form for a few days with some help from a little river mouth. I decided to get up early and have a look. The alarm rang, I looked out of the window for a little wind check. The ground was white! It was snowing! I had to scrape about a 10cm layer of snow off my boards, just laughing the whole time. I put the coffee on, had a pancake and suited up for the road. Surfing while the ground is covered with snow has been something I always wanted to tick off the bucket list. The snow literally stopped where the seafoam started! It wasn’t the best waves, but I had so much fun and it took a while to wipe the smile off my face after that session.” 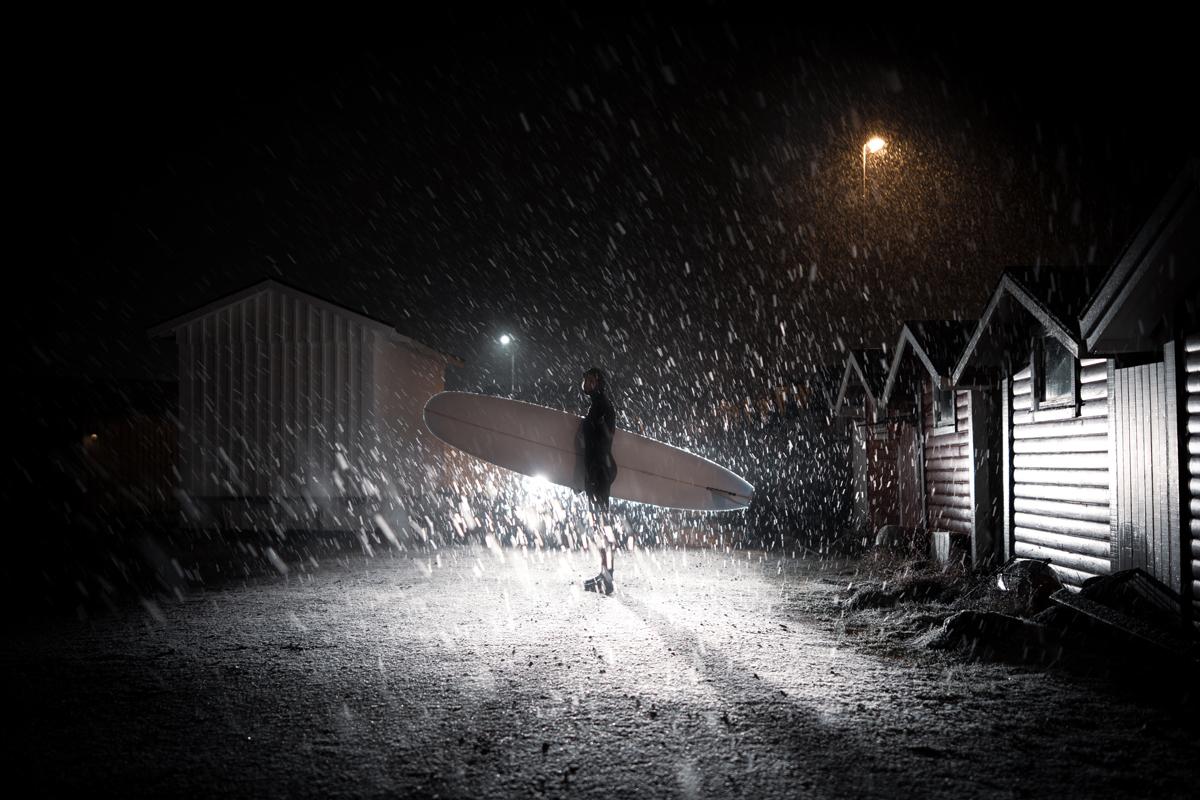 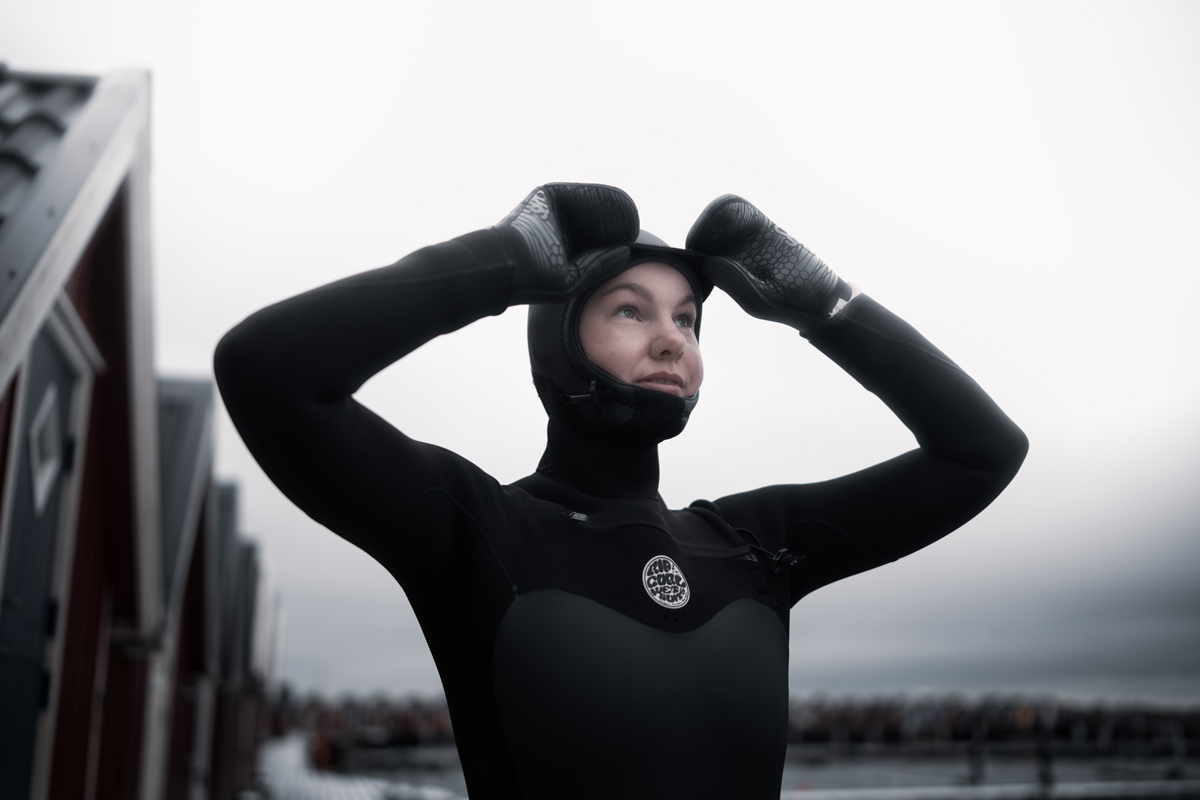 Sara Bjurbäck, 24, lives in Varberg, a chocolate-box town on Sweden’s West Coast christened the surf capital of the country.  Well known as one of Sweden’s favourite spa resort towns, and a fishing haven since the 1800’s, Varberg’s reputation for surf has been growing thanks to its 2.5km coastline of beach breaks. It’s populated by a large community of surf-hungry women, patrolling forecasts looking for swell in Varberg’s infamous black waters.

“The surf in Sweden definitely fires in the autumn when the storms pick up, that’s kind of essential for us. Wind. So when the other non-surfing-Swedes complain about bad, rough weather, the surfers dance with joy. It is such a privilege to learn to love all sorts of weather when you live in a country like ours, when the seasons really are a thing. Since we are dependent on the wind, you really learn to appreciate all kinds of waves, no matter how small or choppy, you can’t really be picky. And then once in a while when you get something out of normality, the stoke is untouchable. As a surfer in Sweden, you get really thankful for whatever you get, which I think is a beautiful and humbling experience to embrace in your everyday life. 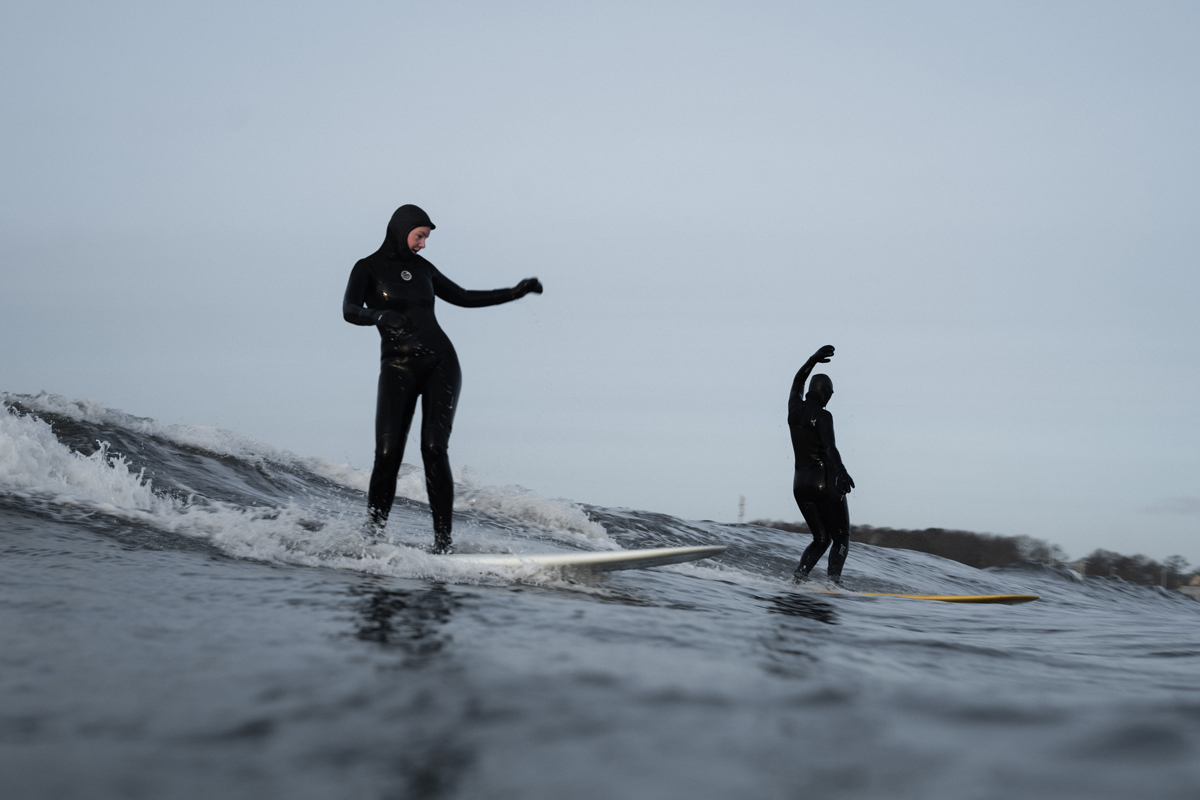 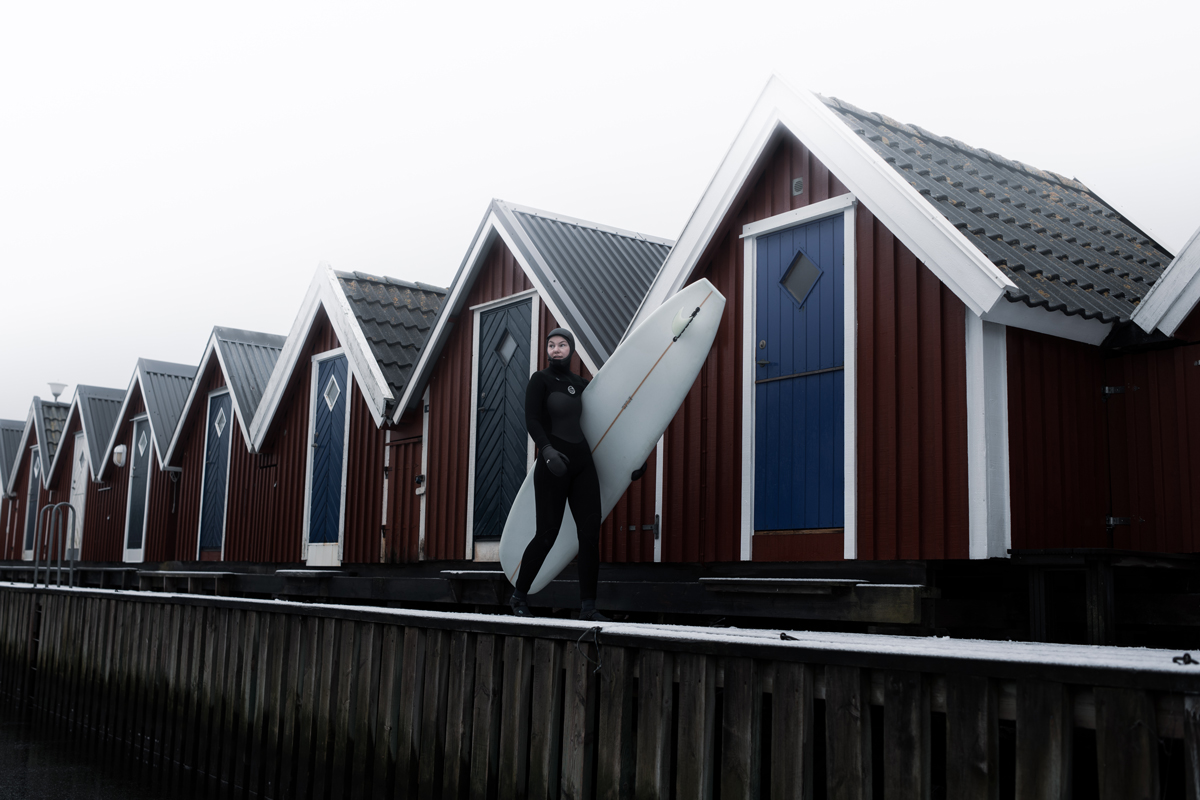 Besides wave surfing it is very common to kitesurf, wind surf, wake surf,  but also wing, SUP or foil for the simple reason that you get more days in the water. So within surf culture, there are also a lot of subcultures to each style.  In our town, you can find so many rad coffee shops and bars inspired by the surf culture.  I decided to arrange a non-profit surf competition in our town. The event is called Varberg Longboard Open, and it’s all about grooves and good vibes. It’s an event to celebrate the local surfers of the area. It is very much inspired by the Vans Duct Tape, an amazing concept and such a cool event. Sweden actually has an interesting surf culture with so many dedicated surfers and it’s time to embrace that.

There is such a laid back, cheering vibe amongst the surfers, especially by the loggers and the ladies. As a Swedish saying goes “delad glädje är dubbel glädje”, which translates to “shared happiness is double happiness”, and it’s a good description of the female community in the water. You can be such a beginner or you can be super-advanced, no matter what it’s all about just getting out there and having fun. It’s the perfect place to meet new friends. I definitely see more and more girls eager to try it out, and I’ve also seen many female surf group communities pop up on social media in my area. 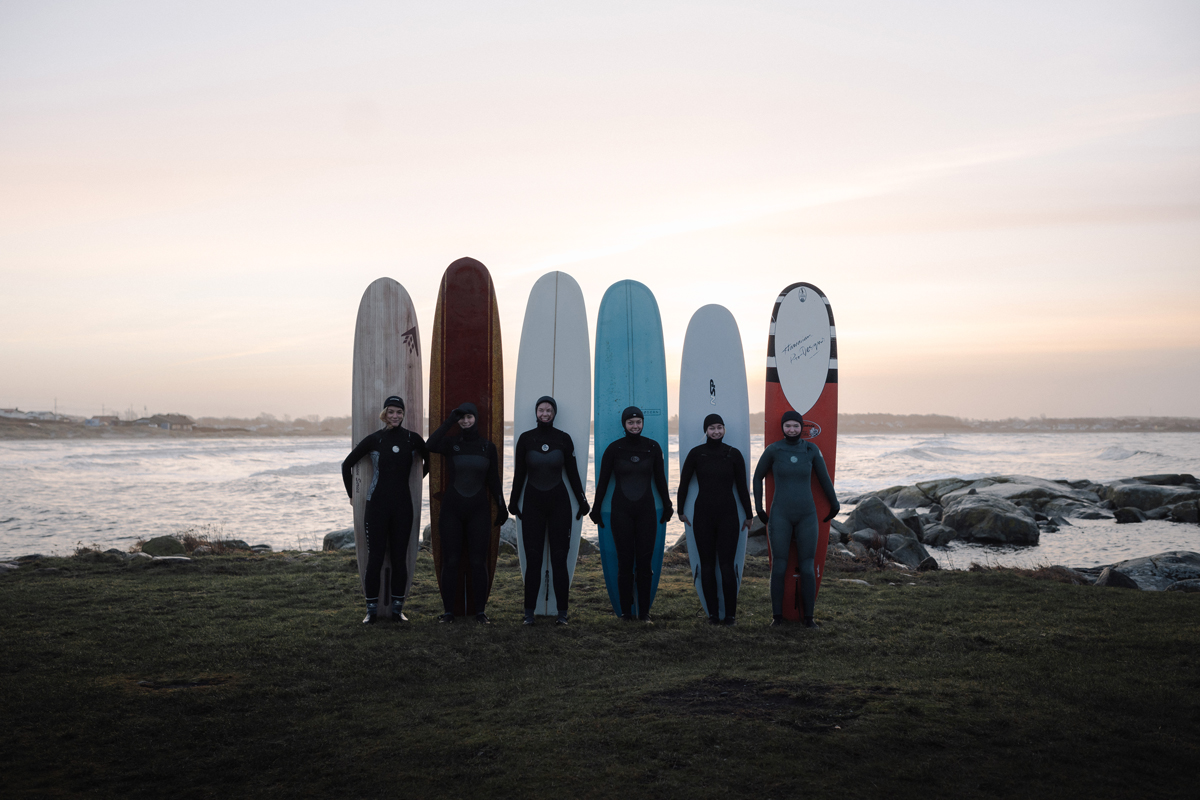 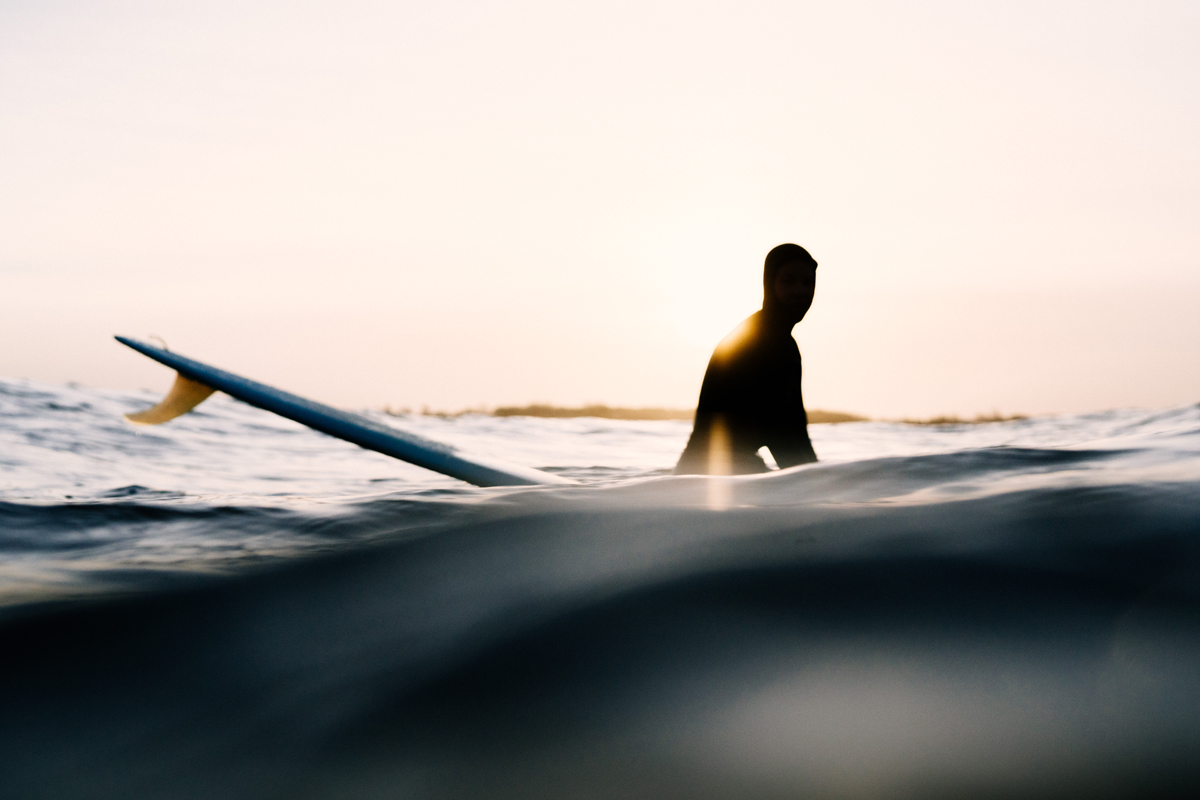 A really special and memorable session was during a road trip to the south of Sweden in October last year. It had slowly started to feel like autumn, but the weather was still sunny although chilly. I think we were a group of friends of about 10 people who slept in our cars at the parking lot just to surf the whole weekend. The ocean had been kinda messy and chaotic but on the last day, the glassy waves decided to show up. The set waves just kept coming and I couldn’t bear to stop. I almost couldn’t believe we were surfing in Sweden. Since that day, I’ve been longing to experience another session like that in Sweden, and I keep searching and waiting.”

With winter 2021 already one of the coldest seasons on record, the “Beast from the East” lashing mainland Europe with snow and ice (erm 8 inches of snow in the centre of Madrid anyone?), staying [...]

Across every surfing discipline, from aerial specialists to light-footed loggers a new contingent of young women is emerging to challenge the old guard.  Of course, this is always true to [...]