Home » GALLERY: Typhoon Swells In The Land Of The Rising Sun; Welcome To Hebara, Japan

GALLERY: Typhoon Swells In The Land Of The Rising Sun; Welcome To Hebara, Japan

A series of beautiful images from the land of the rising sun.

Japan has long been known for its plentiful and occasionally world class waves, with the popularity of the sport in the nation amongst both tourists and locals blowing up over the past decade.

We recently caught up with British expat Dane Gillett who has moved his life out to Japan, dedicating his time to surfing and photographing the waves, as well as running a guest house for visiting surfers right on the beach in Hebara, a surfing hub located in the south east of the nation. Dane with his gear.

Here’s what he told us about life in the land of the rising sun:

“I was born and raised in the south of England, in a little village called Cranleigh, along with my ​13 siblings. I moved to Japan more than 1​8​ years ago.

“After living in the mountains skiing and snowboarding for many years, I moved back to Tokyo just over ​13 years ago, where I met my wonderful Japanese wife Madoka, and we started our family, having two sons, Rusty, 10 and Ralph, 7.

“I’ve always had a strong passion for photography, video and anything media based which comes from my marketing background. Fifteen years ago I had the idea of starting www.surfinginjapan.com, with one goal in mind; to photograph and document surfing here in Japan, so others could avoid the same frustrations I was having.

“The ocean really is my home now and I support my family by running a B&B from our home on the coast. Splash Guest House was a very natural thing for us to do, as we always had friends staying with us or surfers popping in to say hello. We pride ourselves on our location, good food and great times.

“Travelling so much on surf trips and photo shoots I’ve had the opportunity to meet so many amazing people, see different cultures and eat so much great food. Giving that same experience to our guests really is satisfying.

“Living in front of some of the best waves in Japan really allows me to perfect my art as a photographer, and enables me to always be here when the surf is firing.” Offshore and overhead draws a crowd no matter where you are in the world. Photo Dane Gillett

“The waves are truly amazing, predominantly because there is so much surfable coastline and the range of surf from north to south is staggering. From Hokkaido in the North to Kyushu in the south there is more than 1200 miles of Pacific coastline. Not forgetting that Japan also has more than 6,500 islands, many of which are subtropical. In the south, the most well known and visited is Okinawa. Hebara, where Splash Guest House is based, used to ​play host to the Japan leg of the ​WSL.

December to April sees big northerly winter swells and mid period NE swells lighting up the beaches and reefs and with perfect dry off shore winds, it’s one of the most consistent times of year. But the water is cold and 4/3mm and 5/3mm are the go.

May-Mid August is the quiet time, normally only small fun days but if you’re willing to drive fun conditions can be found.

August to December is typhoon season, when the big stuff turns up on massive long period swells and some of the best breaks in Japan turn on. Seriously world class waves with warm water, but depending on what’s going on with the swell different breaks will work.

I get asked what’s the best way to describe the waves and I always say the same thing after 15 years surfing here; I let my photos and where I live tell the story. I wanted to live somewhere with epic and consistent year round surf right out front and I think I’ve found it.” “At Hebara it’s now really friendly. As with the many breaks in Chiba (where the 2020 olympic games is set to be held), we have a lot of history, but like everywhere in the world as long as you play by the rules and respect the locals you’ll have a great time. Here in Hebara the history runs deep, like in Hawaii, especially on the local reefs and big wave spots and our advice is always try to hook up with one of the locals to get the low down before heading in. Especially if you’re here to surf the big stuff.

The rest of Japan is similar and as a foreigner you’re accepted with open arms at most places, apart from some special points, so best to check before paddling out.” What’s your favourite thing about shooting there?

“I’ve been able to document some pretty amazing sessions around where I live, as well as surf, SUP and bodyboard them.

There is so much more I want to do with so many more people and with the rate technology is going the results, I hope, will just keep getting more and more spectacular.

I can’t explain the feeling you get when you document something that you know is a moment in time that will live on forever, because so many minute things aligned for a split second. Whether it’s that perfect sunrise, or a surfer on a wave, or the ugliest of typhoons, I feel that I’m contributing to the world’s first time machine, enabling others to look back on that single moment in time even, when I’m not here.” And what has been your most memorable moment or session?

“Without a shadow of a doubt when I met my wife, when my first son Rusty was born and when my second son Ralph was born. But since we’re talking about surfing, I would have to say that very first wave I caught here in Japan up North in Ibarak. It was freezing cold, I had the wrong board, the wrong wetsuit but my best Japanese friend Toru Yoshiike opened a door on a world for me that has truly become my life. I did not get a photo of myself on that day but it will live on in my memory for an eternity.” 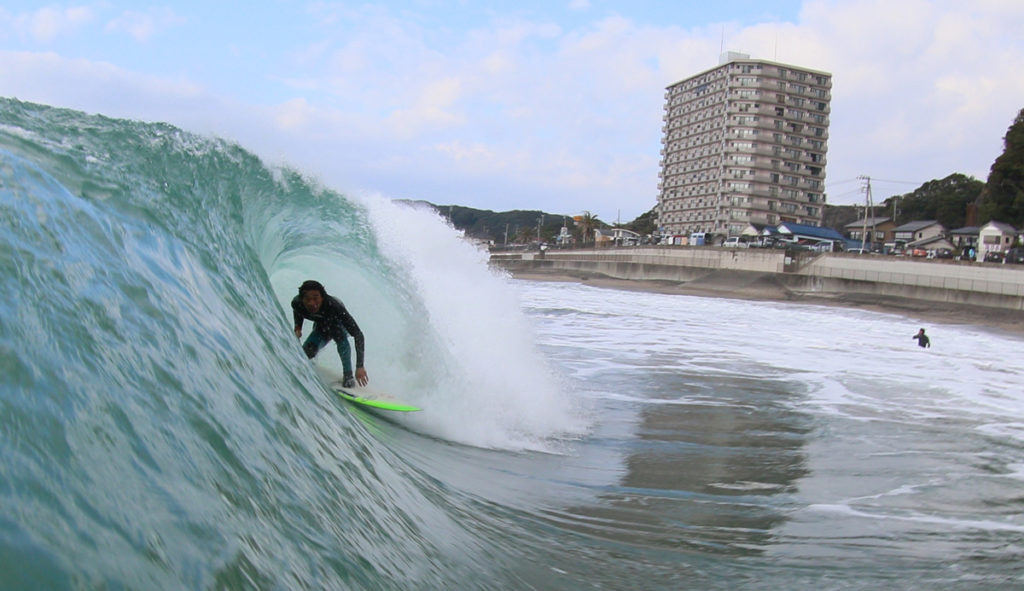 Check out more of Dane’s work @japansurf on instagram and at www.surfinginjapan.com