Home » UK Memorial Paddle Out Honours The Pioneer Of The Wetsuit

UK Memorial Paddle Out Honours The Pioneer Of The Wetsuit

As the clouds parted and brilliant blue sky appeared, the life of legendary waterman Jack O’Neill was honoured spectacularly with a paddle out of over 240 surfers at Great Western Beach in Newquay, Cornwall. With no greater way to honour a man whose life was led by the ocean, the floating memorial was a chance for surfers across the UK to pay their respects and remember the man who “just wanted to surf longer.” Gathering at Great Western Beach, a popular hangout of the inaugural surfers of the 60s, those wishing to pay their respects were guided out past the breaking waves by O’Neill team athlete and 11-time European Longboard Champion Ben Skinner. As they joined hands, surfers came together in a circle sharing words of remembrance, with floating floral tributes marking the life of a surfing legend. The impressive ring of surfboards drifting on the horizon attracted crowds of spectators who lined the headland and beach below. The moving display symbolised the life of a fellow surfer whose sheer passion changed the face of surfing forever. After paying their respects, surfers paddled back to the shore yet some remained in the water catching waves in memory of Jack.

“It was an absolute honour and a privilege to be part of that amazing experience. Thanks to everyone who came along and joined the paddle out this evening. It was really special and something I certainly won’t forget for a very long time.”

Jack was born in Denver, Colorado on 27th March 1923. He moved with his family to California, where he acquired a love for the beach early in his youth. Following service in the US Navy during World War II, Jack moved to Ocean Beach in San Francisco in the early 1950s and immediately began experimenting on his kitchen table with various materials designed to protect against the frigid ocean water in Northern California.  He said, “I just wanted to surf longer.”

By the 50s, Jack had both invented the first surfing and bodysurfing wetsuits and opened his first surf shop near Ocean Beach. He also coined “Surf Shop,” a term for which he later received a Registered US Trademark.

Inspired by the growing surf scene, Jack moved with his growing family 75 miles south to Santa Cruz and opened his next surf shop. Shortly thereafter he began making surfboards, promoting the first surf movies and producing wetsuits for the expanding population of surfers in Santa Cruz and throughout California.

The surfing craze soon expanded way beyond California, and Jack rode that wave better and longer than almost anyone in the surf industry. By 1980 O’Neill had become a thriving international business and the world’s largest ocean recreation wetsuit designer and manufacturer. Jack viewed what he did as a passion, and was more surprised than anyone that the business grew to the point that it did.

Most recognisable for his eye patch and his beard, Jack was often seen driving around Santa Cruz in his convertible Jaguar. The eye patch resulted from his surfboard hitting his left eye while riding a wave. 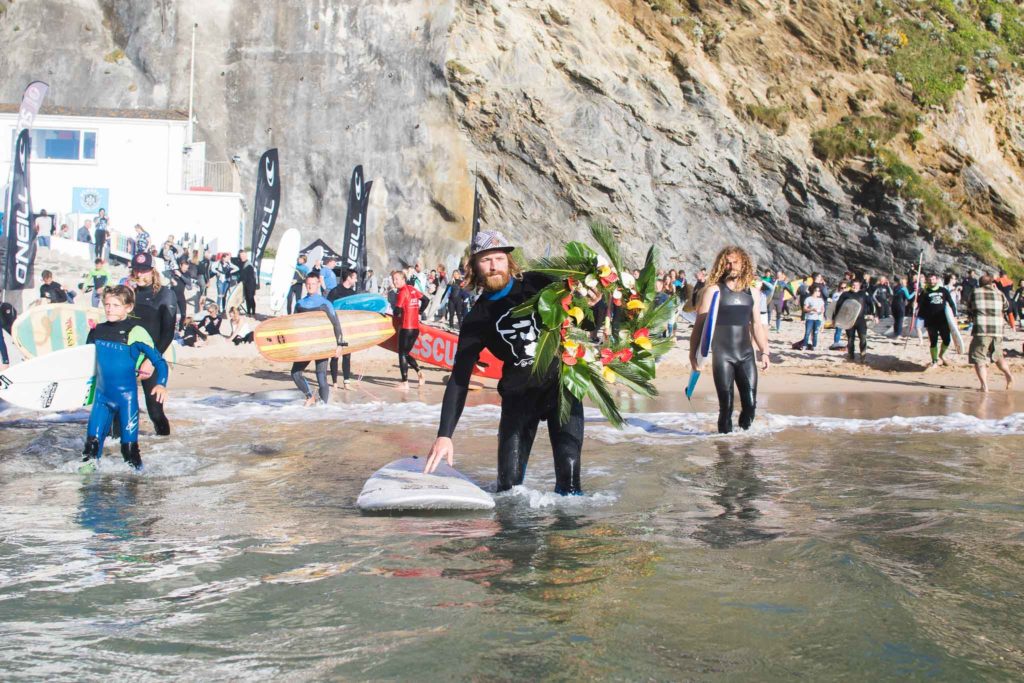 In 1996 Jack established O’Neill Sea Odyssey (OSO), a marine and environmental education program which was his proudest achievement. Remarking on OSO, Jack said, “The ocean is alive and we’ve got to take care of it.  There’s no doubt in my mind that the O’Neill Sea Odyssey is the best thing I’ve ever done.”

“The ocean is alive and we’ve got to take care of it.  There’s no doubt in my mind that the O’Neill Sea Odyssey is the best thing I’ve ever done.”

Memorial contributions in support of Jack’s love of the oceans may be sent to http://oneillseaodyssey.org