Joel Gray is a surf coach who runs Surf Solutions, a coaching set up for British junior surfers. Recently he took some of his Grom Squad for a couple of days training at the Surf Snowdonia wavegarden facility. With an open mind and 6 eager groms did the pool live up to expectations? Does it work as a functional training facility?

“This was  coaching trip and so I was not concerned with getting cool angles and rad photo’s. The pure purpose of the trip was to train and become better surfers in the 4 hours that each person had. My main concern before our arrival was of wave quality. If that did not stand up or was too different to what we get in the ocean then it’s game over. I actually had the first session myself and after starting on my small grovel board I switched onto my normal performance board and at that point knew that we were in business. Although the take off is very different to a normal wave once you have set your initial trim line it is very similar to a  shoulder high wave you would find in the sea. A peeling 5 turn wave with an end section no less. I was beyond impressed with the wave.”

Seems like the groms were totally sold on the wave quality also. Stan Norman at the exact point after engaging the rail when he releases it into a snap. Photo Joel Gray

Stan Norman – “The best thing was just the wave. It’s so perfect and you can do so many turns and you can learn so much there. It was bit smaller but so much more powerful than what I thought it would be”

Sam Hearn – “I had some of the best waves of my life. It’s amazing. And Ive jut come back form a month in Bali too.”

“In terms of coaching and learning it’s a unique environment. In the sea it is easy to loose focus of any technique drills. For example you get set of the day or haven’t had a wave for 20 minutes and it’s pretty hard to stick to the drill your coach gave you. In the pool that is all out of the window. Every wave is the same. You know it;’s coming. you know it’s yours and you know you will get plenty more. Staying on task for the surfers was easy.”

Joseph morris – “It’s kind of like skatepark for surfing. You know exactly what the wave is going to do so you can practice the same thing over again and again. 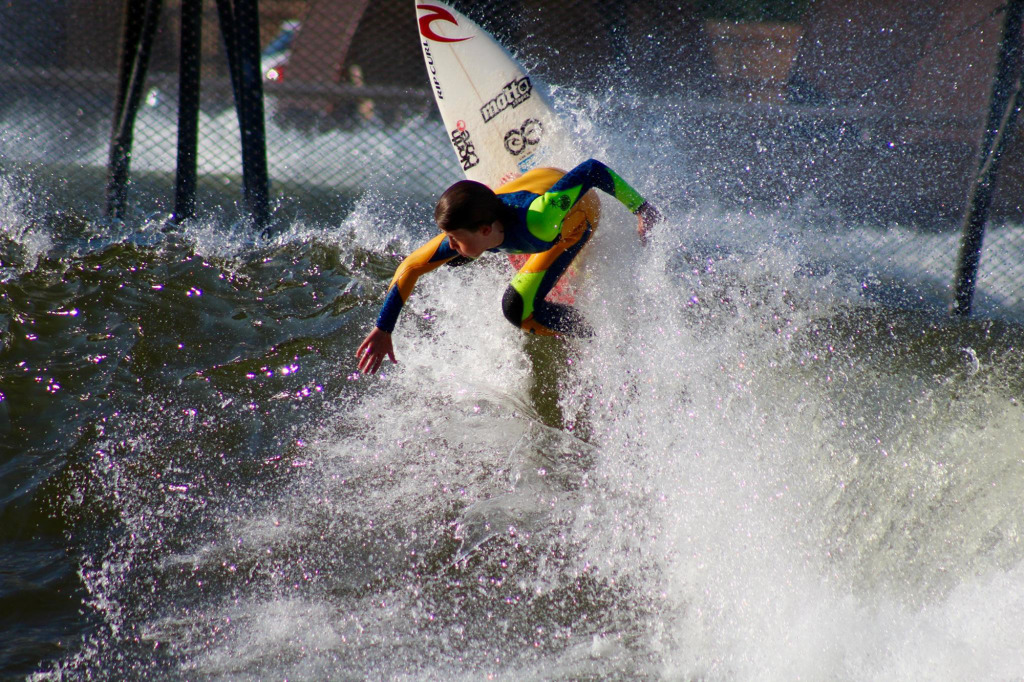 Max Hudson –  “You can get really specific about your technique on certain manoeuvres. I had the best combo’s of my life too”

“We noticed that there were some minor differences between not necessarily the left and right but the waves that come from the North and South. For example one set are further away from the central pontoon and more evenly fade out offering up full roundhouse rebounds. The other direction has a more pronounced end section which has a strong enough pitch for big lip hits and airs. This is not a one directional 1 type of turn wave – all the groms could work on snaps, carves, floaters, lip hits and airs. The thing is legit”

“Each surfer basically had a wave every 270 sections which is pretty much perfect time frame to process the feedback and prep for the next wave.”

Sol Hawkins – “Joel was really close to us so after each wave he could speak to us and tell us what we did right and wrong. It;s so good that there’s different sections on the wave like fat sections, sucky ones and end sections too.” 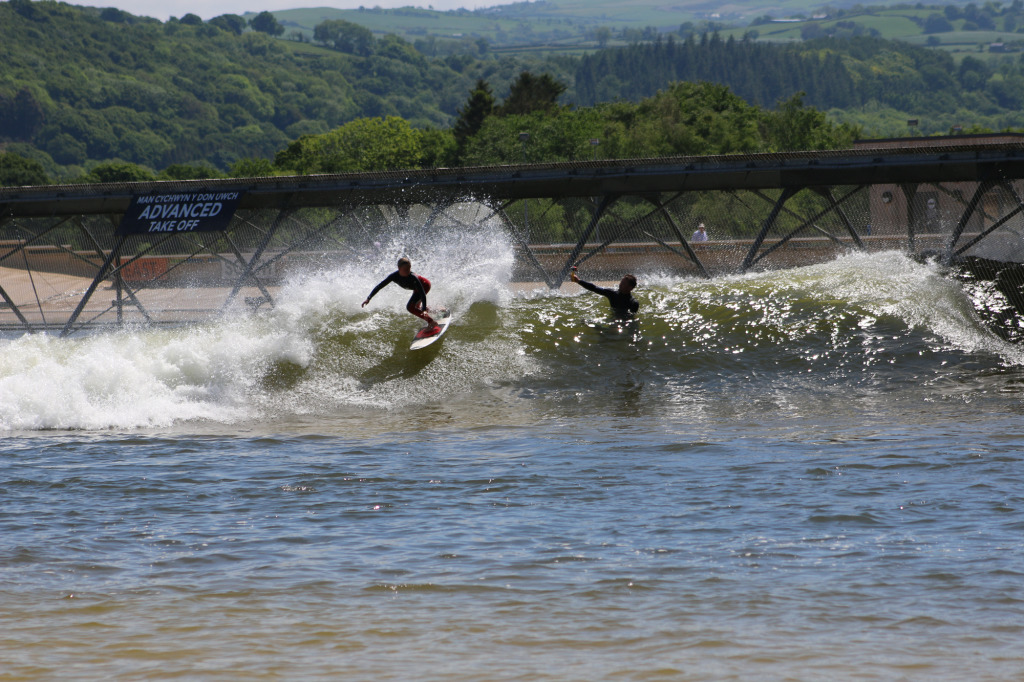 “Repetition is obviously a key cornerstone for learning and development and obviously an environment like this is way more productive than the sea for certain things. But there’s also other bonuses for example there’s no tricky paddle outs, or jockeying for position and when the wave comes you are ready and in no way physically fatigued. All energy and focus can go into your surfing. The clear test for me was that each of the 6 surfers left having improved in the pool. Sure it was really fun and they all are desperate to go back but the bigger value is in their improvement. The repetition allowed some key movement patterns to be ingrained and new moves such as air reverses to get locked down. It was  a real success and hopefully there’ll be more wave gardens and similar bigger and better ones going foreward.”

Cover Photo: Max Hudson all focussed on the next section -Photo Dylan Peg