Welcome to: Scarborough North Yorkshire The first resort for surfing on the east coast

The town of Scarborough was the UK’s first ever holiday beach resort. After the discovery of spa waters in 1626 Scarborough soon became the focal point of health conscious Victorian tourists.

The Spa complex was purpose built to utilise this natural spring and with the introduction of the York to Scarborough rail network in 1845, people flocked to the coastal hub, which is still the largest holiday resort on the Yorkshire Coast today.

The surf scene thrives year round, but Scarborough comes alive in the cold winter months when powerful lows send groundswells marching down the North Sea. In ideal conditions these well travelled swells are then regimented and fanned by our prevailing offshore winds, before bending into the local beaches, points and reefs.

Recent advancements in wetsuit technology have increased the numbers during the icy depths of winter, although with air temperatures dropping as low as -13C and sea temperatures around 4C, it’s never exactly overcrowded.

In the early ‘70s a small group of hardcore surfers, realising this winter potential, started surfing year round with homemade or basic dive suits. Pete Britton, Dave Bell, Bob Bailey, Kev Sarchfield, Dave Denton and John Murphy were among the few regular surfers and before long were pioneering new spots on surfboards bought in Devon and Cornwall.

British-born Pete Britton grew up in Australia and started surfing in 1961. In ‘68 he brought a board back over and led the charge locally. In fact, Pete travelled the length of the UK, surfing as far North as Thurso East, which he first surfed overhead in ‘73. Staying at Thurso campsite, Pete describes how he watched the now legendary wave from across the river before paddling across from the harbour and surfing it alone. 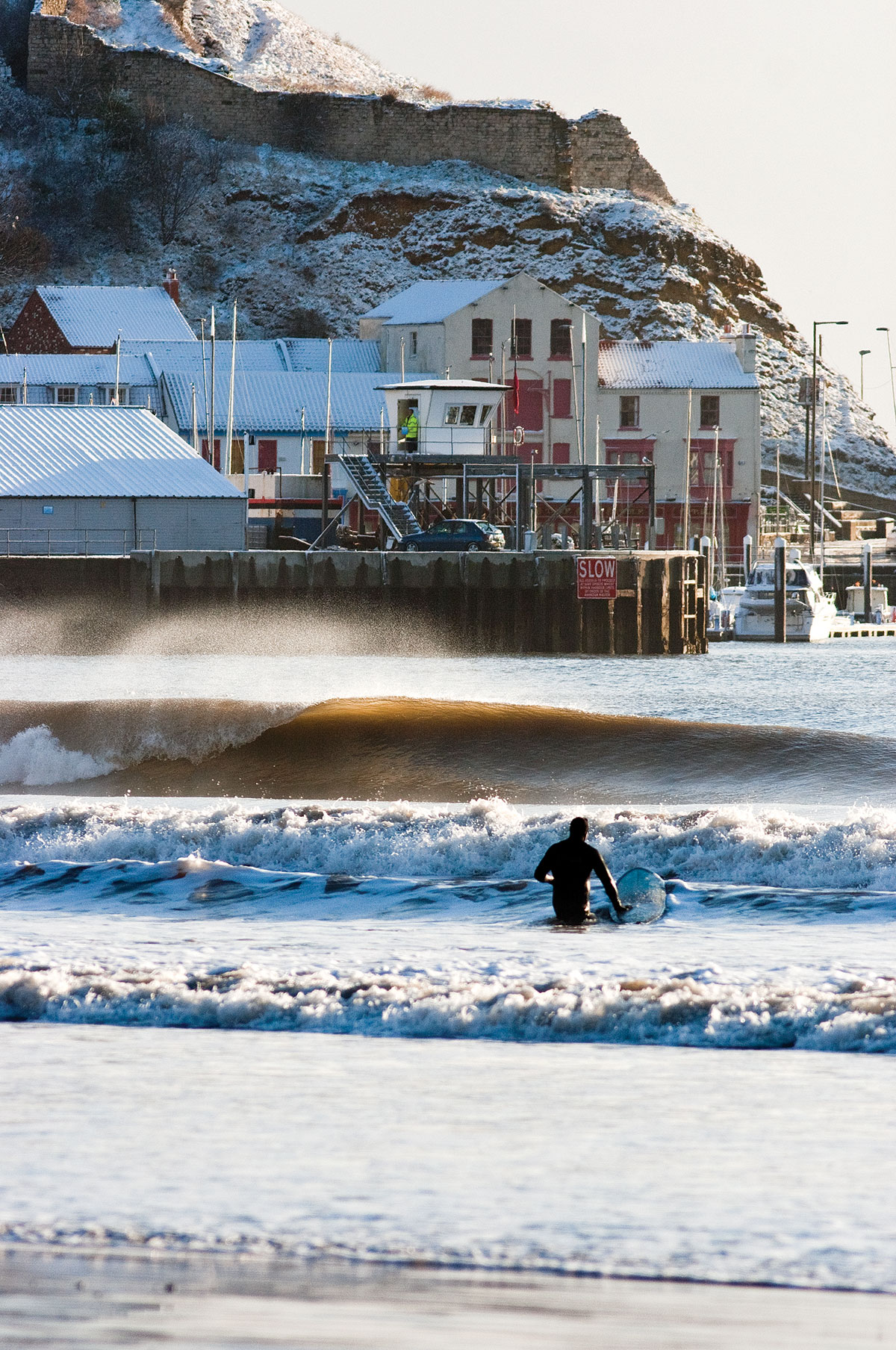 Pete is still a regular in the lineup today, riding his mini mal more aggressively than most of the shortboarders half his age. Dave Bell still heads out on those rare perfect days, but more often he’s surfing the warmer waters of Portugal and the Maldives. Older, but wiser.

The next generation was primed; Eric Austin, Steve Crawford, Steve Temple and Tony Hogan pushed the boundaries further charging the points and reefs at size. Steve Crawford even made an impact in Cornish waters – where he is well known amongst some of the older crew – with futuristic fins-out surfing which was way ahead of his time.

Another local legend (recently for all the wrong reasons when he drove over my magic Adams 5’8) is Roger Povey, who set up the Starboard surf trailer in 1988. Based on the beach, Rog offered equipment hire and surf accessories and later went on to open Scarborough’s first surf shop. Secret Spot moved to its current location in ‘93, when Paul Tomlinson came aboard. 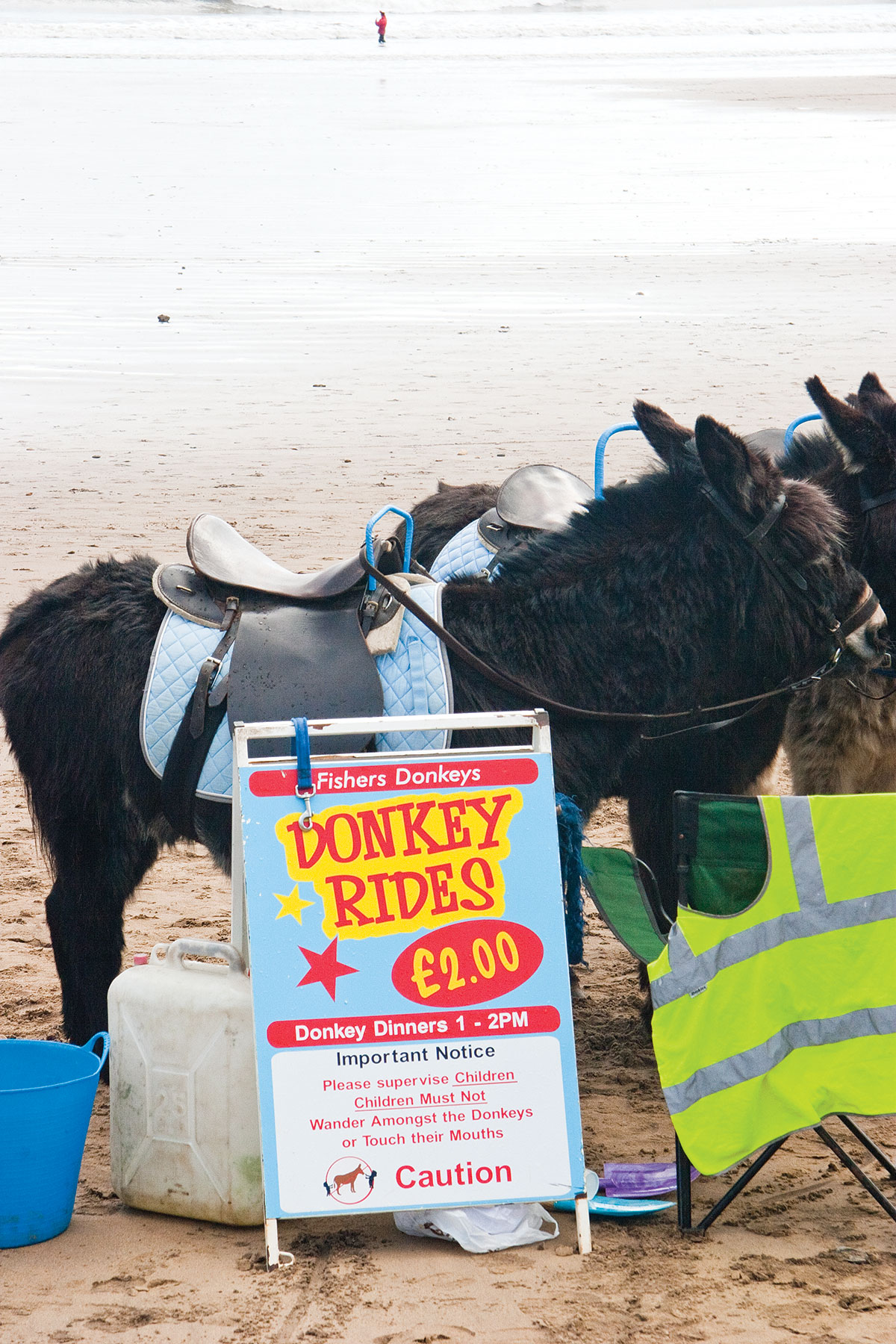 The shop is still going strong today under Tomo’s nose and watchful eye, moving with the times with its website now selling the very best surf gear worldwide. Over the years numerous shops have come and gone. Cool Classics run by Nick Paden was a great little shop full of classic longboards overlooking South Bay.

Lowbrow above North Bay run by Mark and Tony offered good custom shapes and surf goods. Today, Vibe surf shop next to the Grand Hotel run by Carl is growing (when he’s not surfing) and Steve Crawford runs the Fluid Concept store at South Bay Spa (when he’s not surfing!) Mark Dickinson aka “grommet” set up the store with Steve and has been shaping all manner of craft for many years. Another local shaper Mat Jones has recently started AMP surfboards making custom boards locally.

I’m part of the fourth generation of Scarborough surfers in our thirties, but it was the third generation that really pushed surfing here, especially in the big stuff.

There are too many locals to mention, but guys like “Captain” Del Boy pioneered new found reefs and point breaks and you’ll still find him throwing himself over the ledge today. Local characters such as Scotty, Tomo, SA Gary and Mike, Tom Wilson, Crabby, Paul Anderton, Galvin, Eric Austin, Coxy, Shaun Prawn, Grommet, Chiney, Sinbad, Pat and Dave Bell, amongst many others, all charged the winter swells on the points and inspired the next generation who were expected to prove themselves and show a little respect in order to be accepted into an already tight knit pack. 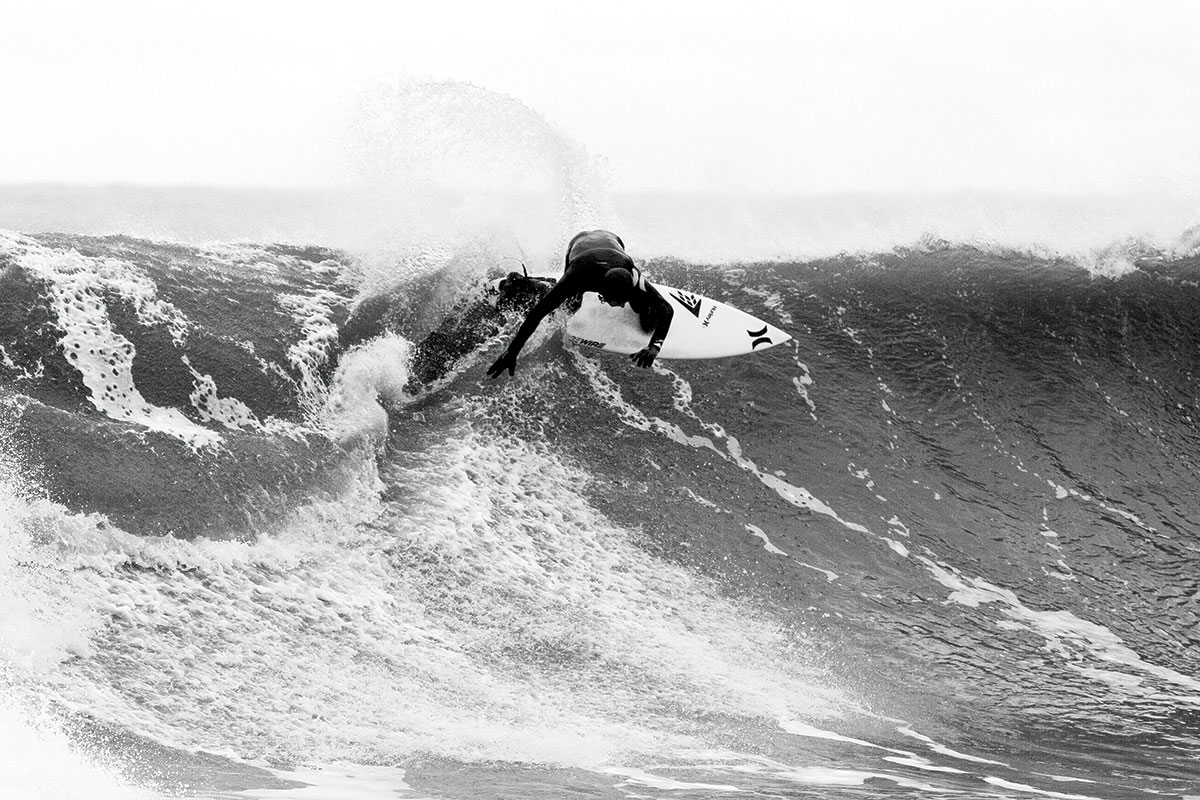 Personally, I miss those days and that crew, although half of them are still regulars in the line up when the surf pushes six foot. In decent surf there’s still a good atmosphere with plenty of piss-taking – it may be busier, but the vibe in the water is as good as it’s always been.

The next generation pushed performance surfing further with regular competitions and friendly rivalry. The standouts over the last few years have been Icky, Jamo, Kitch, Scotty and SA Gary, amongst others. A crew of lads from further south started appearing; Joss, Birch, Tom, Ry and Rich, all surfing well after learning quickly in less consistent but empty surf.

Two local Cayton lads, Chris and Rich Ireland, decided to push the boundaries further and headed way up north until they hit Iceland. Back home, a younger crew have come together more recently, all super keen and improving swell by swell, but they need to start pushing themselves in the bigger stuff. One thing that’s good to see is the increasing number of girls surfing year round all along the coast, often more keen than the lads. 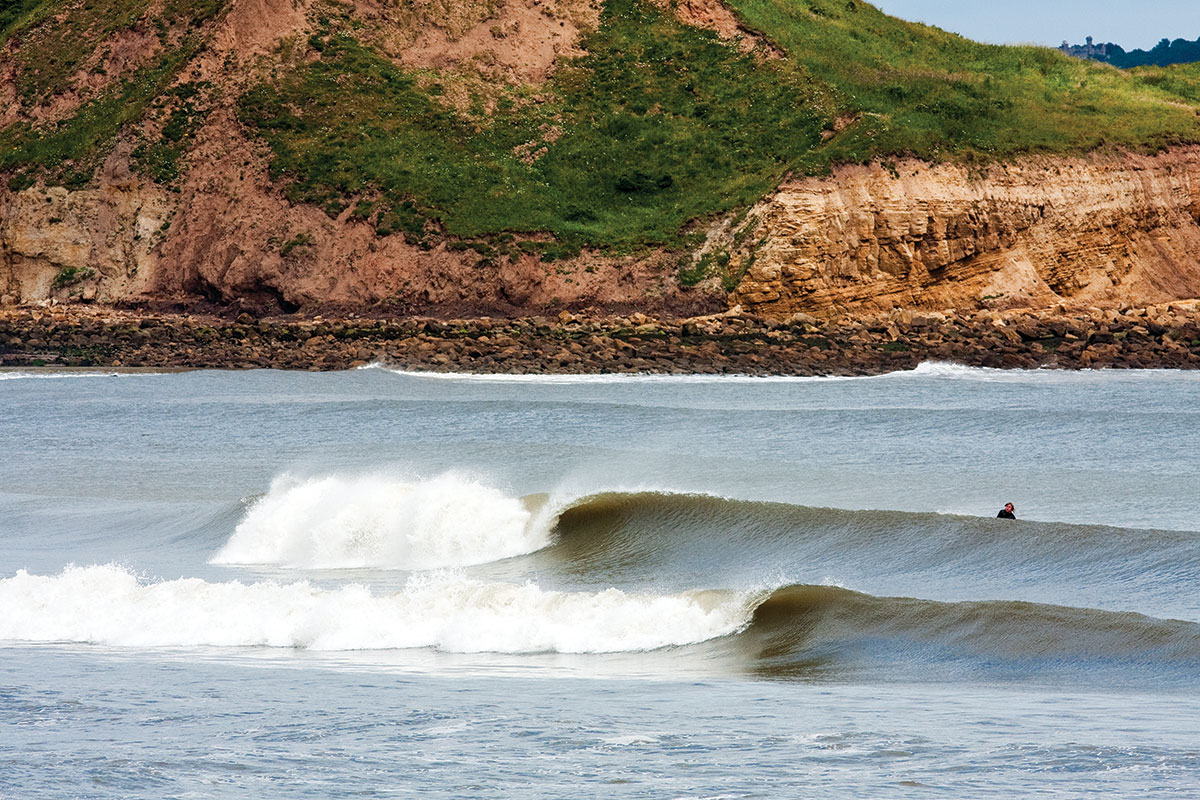 We are pretty lucky on the East Coast receiving surf from the NW right round to the SE, and what we lack in consistency during the summer months is made up by the quality of our set ups. The surf along our coastline is varied, with numerous slate reefs (know as scars), boulder points and quality beach breaks.

Huddled and hooded, we sit patiently staring out to sea where the steel grey sky merges with frigid brown

Our most consistent waves are found on our three main beaches – North, South and Cayton – with almost all winds, tides, and swells catered for. North Bay is the most popular, with good peaks throughout and occasional classic rights in the corner. Whereas South Bay is more sheltered and has saved many a fruitless goose chase in big northerly storms.

Further south lies Cayton Bay, which, at high tide, is the hub of the local surf scene. With no sea wall, Bunkers provides quality peaks with no backwash and for this reason gets busy quickly. With plenty of take off zones it handles a crowd fairly well, although in smaller swells it can get hectic.

The middle of the beach offers a slower wave, whilst Pump House on the mid-low does the exact opposite, with fast hollow lefts, often closing out, but sometimes perfect. With the car park, hot showers and K10 Surf Shop above the Bay, surfers are well catered for and the hectic busy summers are balanced by the cold quiet winter months.

This is when Cayton Point awakens; a heaving multi-lipped beast of a take-off, which doesn’t so much break over but into the rock ledges that step out to sea. Get it wrong here and you’re in a very bad place with little or no hope of escaping unscathed and a real possibility of getting killed. 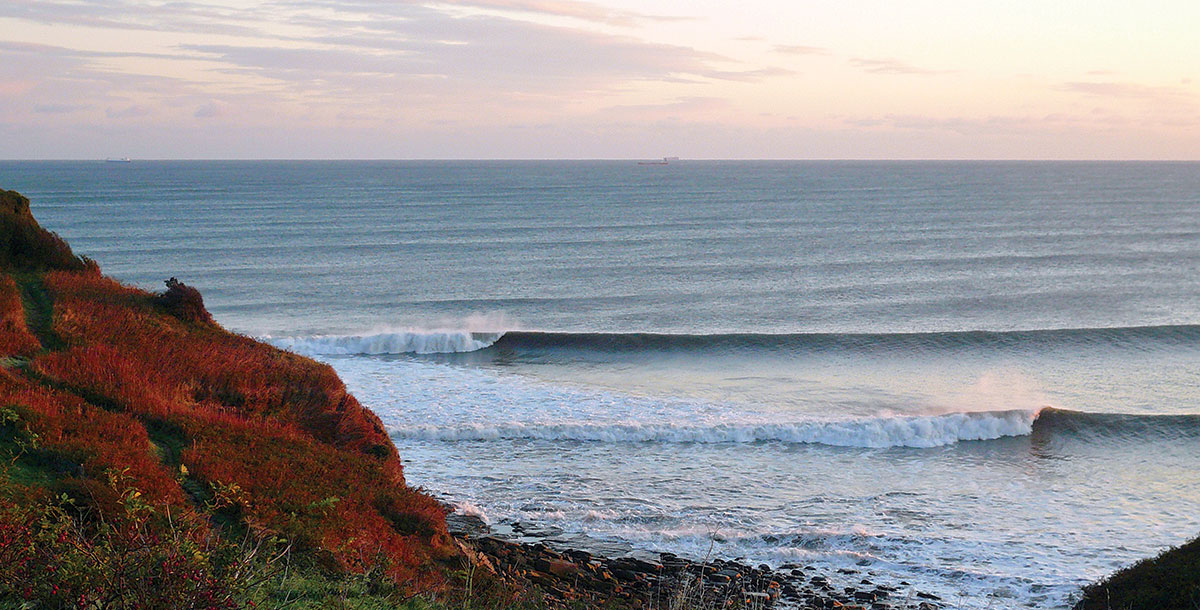 One of the nearby secret points – Image: Greg Martin

Still, there’s always a pack of slightly deranged but fully committed locals willing to risk throwing themselves over the ledge and more than happy to paddle straight back to the take-off zone. Sitting wide lessens its ferocity, and the result is a steep drop into big open face rides and the odd hollow section.

The Point is at its best from 6-8ft, but will hold a solid 10ft swell and on those rare intimidating days there’s always the same four or five (almost all unsponsored) guys charging some pretty serious waves. This is one of my favourite breaks.

Four years ago my wife and I bought a house nearby and I can now check the wave in less than a minute from home. In reality though, I’ve only seen it break properly twice and subsequently haven’t surfed it in over two years. Sad but true. 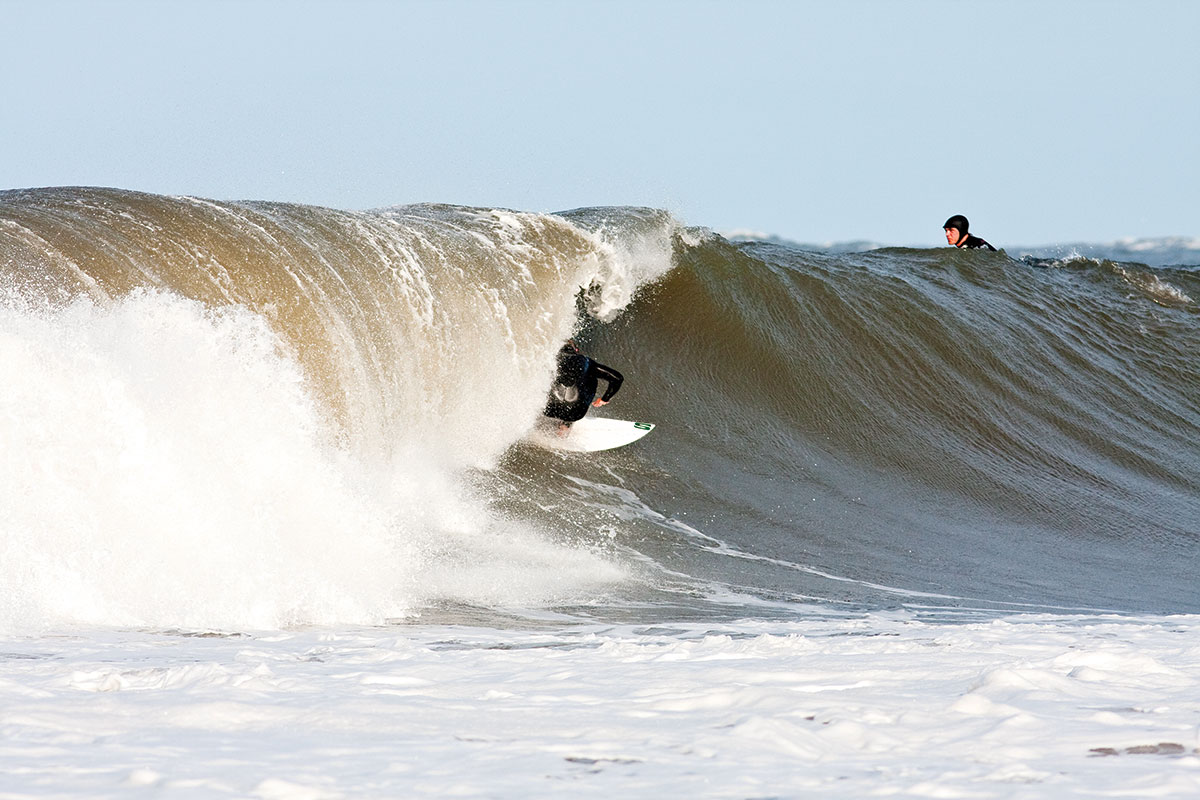 We’ve got some good setups locally no doubt, but you need to be on it to maximise each swell. Speaking from experience and from talking with long time locals, it seems our waves were indeed better back in the day.

It seems that changing weather patterns, global warming and movements in the jet stream have contributed to fewer perfect groundswells. The problem lies with the swells themselves and not the setups, which remain there waiting for the right swell, wind and tide, just as we are -primed, prepared and as enthusiastic as only an East Coast surfer can be. 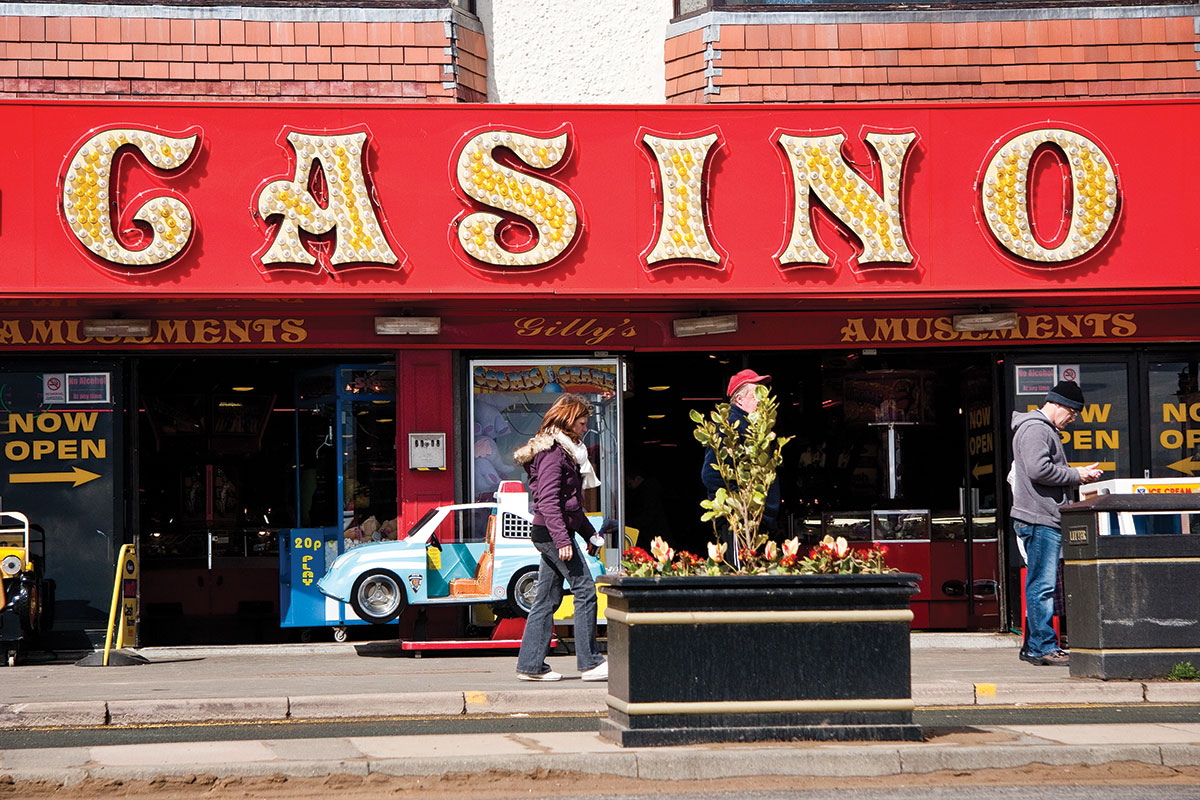 Inconsistencies aside, we still love our pastime in the North East and are proud of what we’ve got. Up and down the coast from Scarborough to Scotland you’ll find us out in all weather and all conditions, even in the deepest darkest depths of winter as the reefs and points rumble to life.

Huddled and hooded, we sit patiently staring out to sea where the steel grey sky merges with frigid brown as another set thunders round the corner. It’s at times like this you forget about the cold, the thick rubber, and even the stinging hail assaulting your numb face, as your heart pounds and you scratch out for the horizon.

This article was originally published in Wavelength issue 220. Be the first to get our articles in print and online by subscribing here. 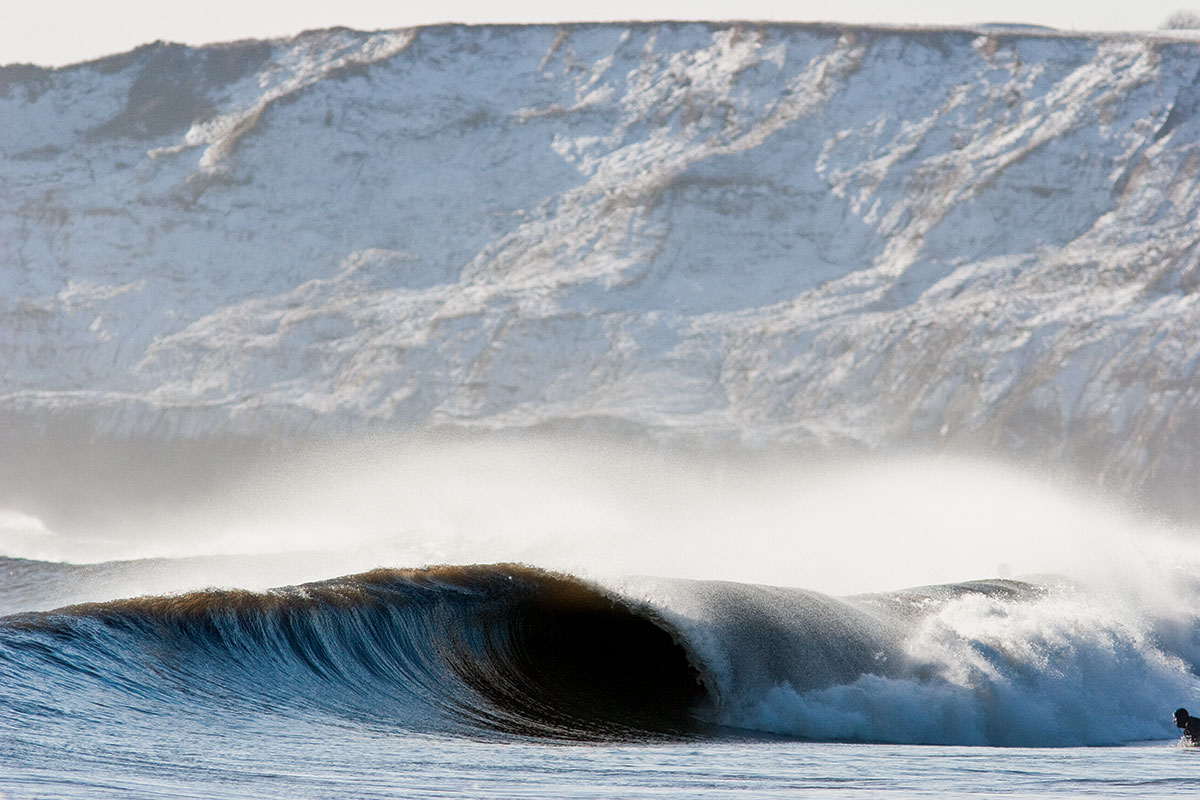