Discovering the first stop for swell in Wales

With its rugged coastline, secluded beaches and breath-taking scenery, South Pembrokeshire is definitely one of the most beautiful and diverse coastal areas in the UK. From a surfer’s perspective South Pembrokeshire stretches all the way from Freshwater West to roughly Tenby area.

Tenby is one of the main towns with a population of about 5,000. It is also a tourist hot spot and a bit of a quirky place, with cobbled backstreets leading through 13th century medieval walls and a pub around every corner. In the summer months Tenby is carnage with thousands of tourists enjoying fish and chips and sunbathing on one of its many golden beaches when the weather is good. Winter is a different story though; it can be like a ghost town with not a soul about. But for surfers, it’s the best time of year, because this is when the swell comes to town.

The History
The whole area has bred core groups of surfers since the sixties, with the likes of Paul ‘Spyder’ Ryder, Fluff and Bob Rogers leaving the footprints for generations to follow. Off the back of the club’s success and with the latest generation coming through, sponsorship has finally made its way passed the Vale and Gower to support some of the local talent, with surfers such as Harry Cromwell, Kiefer Thomson and myself now riding for teams of big name brands and putting the area on the map.

The Waves
The surf spots in South Pembrokeshire range from long beaches broken up by rocky outcrops, to sheltered coves. Tenby is the furthest beach east on Pembrokeshire’s south coast.

This is home to many of the local surfers and is made up of two beaches, North Beach and South Beach. North Beach is a crescent shaped bay with a harbour in the corner.

There is a very rare right hander that breaks out in front of the harbour, but it needs a swell of 20ft plus to awaken it. South Beach is a lot more consistent, with its multiple peaks that are always hollow and breaking close to the shore, making it a nice winter spot to escape those duck dives. For the swell to get into South Beach it has to wrap around both ends of Caldey Island first, and this causes it to hit the beach from two different angles, creating the most perfect peaks, especially when the wind is north west.

If you start to head west from Tenby you get to Manorbier, which is a generally a slow right hander at high tide breaking over reef, but receives a decent amount of swell and handles onshore conditions.

On its day it will rival any beach here in the UK, but there is a certain way you have to surf this wave and not many people get on with it

It has a reputation of being a longboarder’s wave, but local shortboarder Harry Cromwell swears “it’s where dreams are made”. Personally, I prefer Manorbier as the tide drops back, when the waves start to break on the sand in front of the reef offering up rights and lefts, which in turn spreads the crowds out a bit.

The only problem is that it only works on the dropping tide; it could be 4ft on the drop and 1ft on the push.The next beach further west is Freshwater East, which needs the same swell and wind as Tenby, so we only go there in the big swells and only on the pushing tide.

The wave can either be all-time or just a hell of a close out, but it’s always worth a check because if it’s on there will be pits to be had.

Then, there is the legendary ‘wedge’, Broadhaven South, which is my favourite wave ever! It only needs a moderate swell to get going. I’ve had more barrels in one surf there than I’ve had in my whole life at any other beach in South Pembs.

If you’re a goofy footer and love crazy wedges then this is the place to be. On its day it will rival any beach here in the UK, but there is a certain way you have to surf this wave and not many people get on with it.

Last but not least, there is Freshwater West; South Pembrokeshire surfers are blessed to have this place on our doorstep. It might not have the most defined banks, but hell it gets some swell. There is such a variety of setups on one beach, including reefs, points, beachies, slabs, rights, lefts, whatever you fancy, all at different states of the tide. If you start at the north end of Fresh you have “Stoney’s” which is a good right hander that breaks off the headland, but it does rely on the sand being in the right place. Then you have the right in the middle of the beach at low, “Jeffrey’s chocolate orange” as the boys call it. It’s a fast, hollow right that breaks over sand and can hold solid swell.

And then there is the “point” at low tide, which is a left that breaks in front of rocks and is the most surfed spot at Fresh, as it has the best shaped waves. “The Gap” is a bowley right that the regular footers love; this is the spot everyone waits for, but it hasn’t broken properly for a long time as it relays on the sand being right. At low tide, “Middle bay” offers faster waves which can be dumpy but sometimes has an unreal left.

Then at high tide there is an awesome right that breaks over reef and is the best wave at Fresh. When there is no sand in the channel it breaks perfectly, with an easy take off into a barrel section called Barrel Rock. “Rocky Point” is a long point/reef setup, which always seems to attract the swell.

“Frainslake” is the beach within the MOD firing range and so has restricted access when they are firing. Frainslake Beach usually has better banks than Fresh and is popular for its high tide banks, that can be quite heavy, but there is no missing Frainslake’s beast that sits about 900 yards out to sea.

Known as either the Pole or Y-Bocs, breaking over a finger of limestone reef that is covered in barnacles this is one of the heaviest and hardest waves to surf. You have to have some big balls to surf this place as it dishes out hidings for fun and the power of the wave will rip your wettie boots off. I had the worst experience of my life out there one day, when it was only about 3ft.

After going over the falls on the take-off, I managed to get caught on a lobster pot rope that was running underneath the water parallel with the reef. The wave then dragged me down this rope whilst my board tombstoned. I came up in ankle deep water with my leg being pulled out the socket by my leash, then was pinned to the reef by the following five waves. I lost the nose off my board and ended up going home with my tail between my legs, fully spanked! There’s a crew of local boys who love this wave; bodyboarders and surfers. I’m not one of them, but fair play to Dickie Reed, Toby Bradly, Luke Cromwell, Tony Algeri and others; these boys charge it!

South Pembrokeshire is probably the most consistent stretch of the Welsh coastline, and though it might not have the most perfect peeling boulder point breaks or easy paddle outs, it definitely has some punch and more wedges than a Dairylea cheese factory.

Words Alex Morris Photos Dean James
This article was originally published in Wavelength issue 221. Be the first to get our articles in print and online by subscribing here. 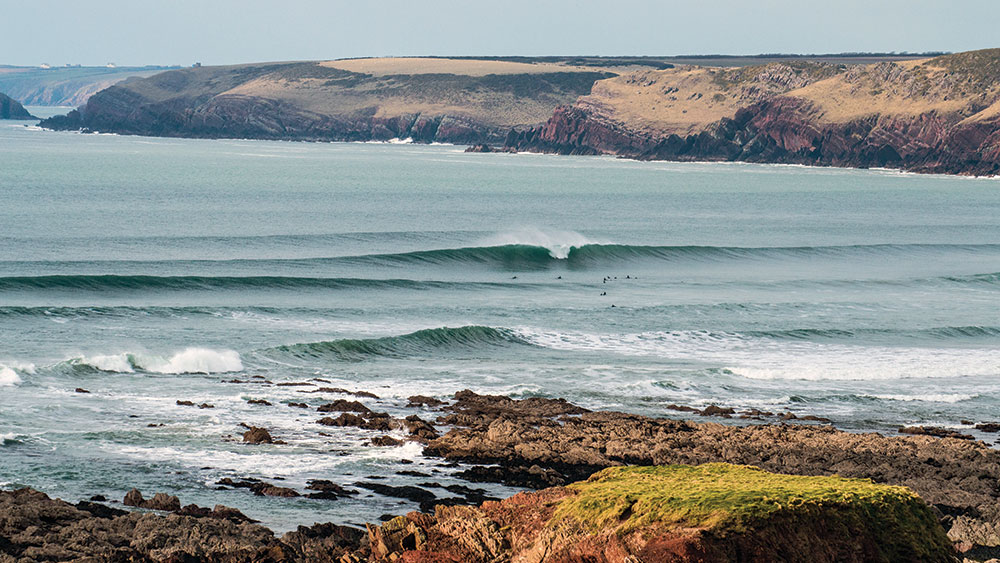