Forget the stereotypes, Yorkshire isn’t all flat caps, whippets and ‘ee by gums,’ for over here in the small coastal town of Whitby, things have developed in relative isolation and therefore have a distinct character more in common with Scandinavia than say, Leeds.

Surrounded on three sides by the spectacular North Yorkshire Moors National Park, the small town is an eclectic mix of picturesque fishermen’s cottages, storied Georgian town houses, cobbled streets, nooks and snickets. It can also lay claim to having had a major global significance way beyond what its modest size and remote location might suggest. 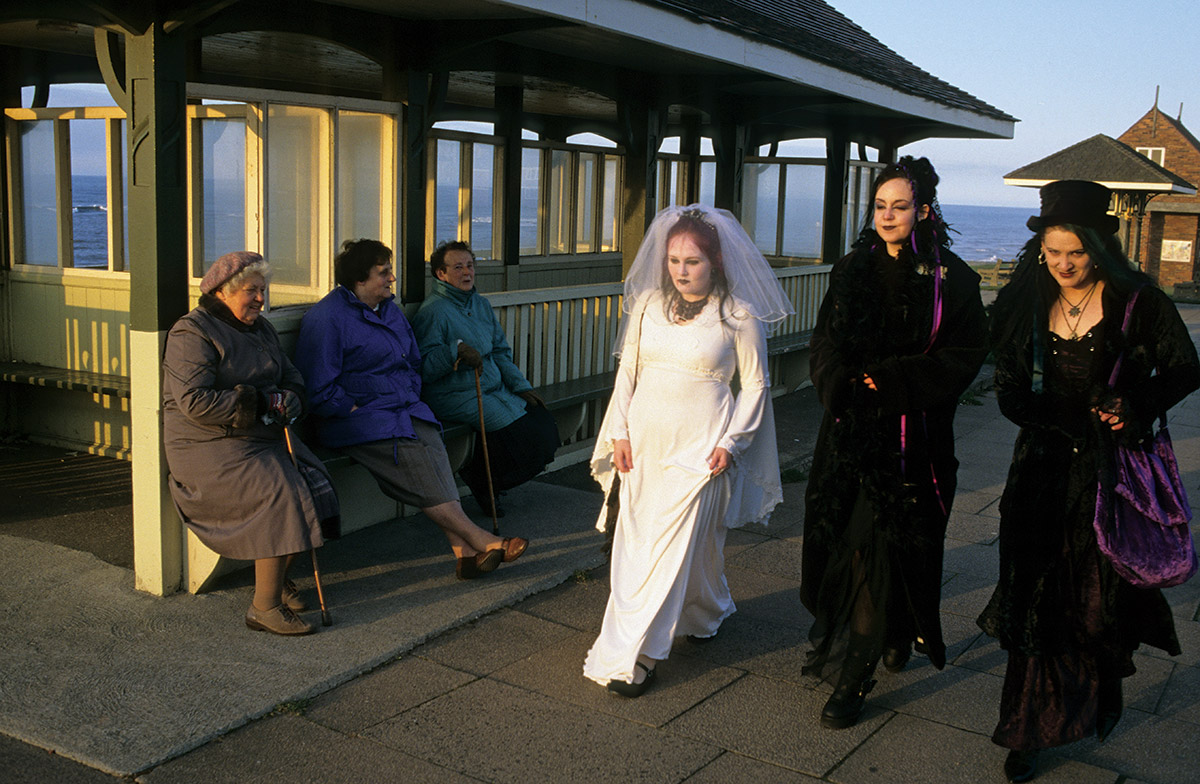 History:
The earliest records from AD656 name the settlement as Streonshal and mark the birth of the town with the erection of the Abbey, which still dominates the town. It was shortly after this, in 664, when monks met to discuss variations in customs, notably the method for fixing the date of Easter.

The system they decided upon is the one we still use today. So if you find yourself confused about when Easter falls, you now know who to blame.

It was only a few years until the next significant event – the coming of the Viking raiders. After laying waste to the Abbey, they became peaceful settlers and decided to rename the place Whitby, meaning white town, in reference to the white water of the waves. It is said that the traditional inshore fishing boats still used today, known as cobbles, derive their shape from the Viking long boats.

Fast forward to medieval times and the town has now grown in size and wealth, all due to maritime trade. Soon after, Whitby’s most famous son, Captain Cook, ‘discovered’ Australia, New Zealand, most of the Polynesian Islands and was the first westerner to describe the art of surfboard riding, forever linking the area into the history of surfing worldwide.

Thanks to the arrival of the railways in the Victorian years, the town’s popularity as a tourist destination grew rapidly. It was also around this time that a certain Bram Stoker came on holiday whilst working on his novel Dracula. By all accounts he was so inspired by the atmosphere and history of the town – plus the great view from his hotel window of the harbour, Abbey and the 199 steps up to it – he set three important chapters of the book here.

Today this link has become a tourist attraction in its own right, as the town holds a twice yearly Goth festival. Concern at the first few events by the local clergy that the town was being overrun by devil worshipping heathens has been long forgotten.

In fact, it’s now so popular that hotels and B&Bs are always booked up for months in advance, with an increasing number of non-gothic visitors coming to enjoy the spectacle and fewer of the true Goths.

Pioneers:
At low tide the sand stretches three miles from Whitby all the way to the pretty village of Sandsend, and it was here in 1971 that a 15 year old Mike Russell first took to the waves.
He got his first and only board via a Kiwi artist who sold local scenes through his dad’s fishing tackle shop. “I’d seen this Tiki pop-out board hung up on his studio wall when we visited him for new stock, so when he decided to emigrate back home, my dad bought it.

I didn’t have a leash and I had to make my own wetsuit whilst at school from a pattern for a diving suit. Eventually I saved up enough for a “Javelin”, which was the bee’s knees – it was a two piece and made out of a double-sided towelling material. I did it for two summers, but by that time I’d took to becoming a fisherman.” This knowledge of the sea led him on to becoming the full-time coxswain of Whitby lifeboat, which he has been for the last ten years and continues to this day.

Just jump in, respect the line-up and you’ll be welcomed

Four years later and totally independent of that first board riding session at Sandsend, Alastair Dean was on a school canoeing trip to Hell’s Mouth in Wales where he witnessed a couple of surfers and thought he’d like to give it a go. “I had to work for a whole year before I could afford a board. My dad took me to the dive shop in Scarborough and I got a Tiki Custom Nomad.” Living in Whitby, too young to drive and with nobody to learn from, he would walk to the beach and learn his craft purely through trial and error. 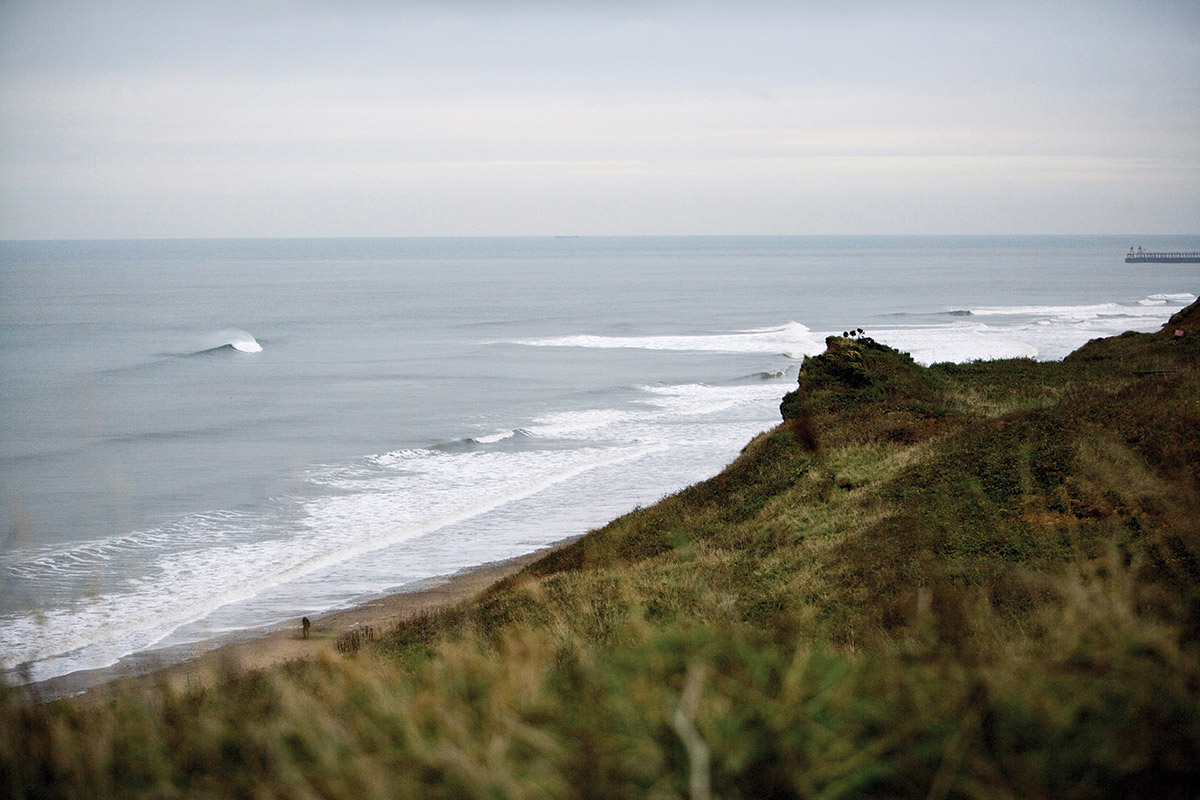 It was another six months before he was joined by his pal Nick Botham and together they fed off each other and became more adventurous, “Once I’d started to drive, Nick and I would travel the huge distance to Sandsend!

It was actually quite intimidating, as we’d never ventured that far before.” It wasn’t long before their first pilgrimage to the surfing Mecca of Cornwall happened; “We went to Perranporth in ’77-78 and I remember you had to register your board with the local council. I guess it was a disclaimer type thing, but I was so proud to have three registration stickers on my board.”

Again all would learn their craft by walking to the waves at Whitby, and it was during this time that a plethora of breaks were christened – starting at Piers, into the Spa, Chalets, Lecter Rocks and the once glorious Black Steps.

This was where the old crumbling sea wall petered out at White Point. As the name suggests, a natural point stuck out and would suck in swell, producing super consistent rights and lefts.

Unfortunately, the council in their wisdom decided that the wall needed attention, so in 1991 they not only removed the groynes, which had been in place since Victorian times and held the sand, but also extended the wall and placed rock armour at its base.

This killed the break as it produced a backwash rip of such horrendous proportion, it would regularly catch people unaware. Speaking from experience, don’t be fooled by the good looking peaks, it can be really dangerous there now, especially on an incoming tide when it’s virtually impossible to escape the rip. These halcyon days were surprisingly long lived, well into the ‘90s in fact, no doubt due to remoteness and cold. Back then, visiting surfers would be flagged down for a friendly chin wag, but those days are now long gone.

With its more forgiving waves overlooked by lifeguards in summer, and within walking distance of town, Whitby still retains the reputation for being the training ground for local groms before they graduate to the more powerful waves further up and down the coast.

Unlike a lot of places, we don’t get a steady stream of groms coming up through the ranks, but rather a core few who have stuck at it despite the often harsh conditions.

Third generation surfers, now in their late 20’s and early 30’s include Biff, Bod, Bulla and Grom, and it is these guys who in the last few years have been really pushing standards in the area. However, not to discount their talent, it has to be said that a significant contribution to Whitby’s surfing progression has to be attributed to advances in wetsuit technology – particularly integrated hoods.

I cannot emphasize the cold element enough – if you can actually feel your hands and feet, you’re going to improve quicker, simple as that.
It must also be explained that because of the relatively low numbers and tight knit crew, etiquette in the line-up still holds true – a rare thing indeed in these crowded isles.

However, within the last couple of years the area has seen a significant rise in the numbers of visiting weekend warriors, which has tested the limit and unfortunately in some cases reared a reluctant kind of localism. So if you are thinking about coming to Whitby and it’s looking good, just don’t bring all of your mates.

Just jump in, respect the line-up and you’ll be welcomed. It’s no surfing nirvana here, but when the right conditions come together it can be truly epic.

To check out images associated with this article you will need to find yourself a copy Wavelength issue 222. Email our subscriptions team to see if they can find you one.