Note, the title of this article is not Winter Wetsuits Rule.

They don’t, as such. They’re merely a means to an end. They help us get through.
We’d all rather be in trunks, of course, but that’s not the reality.

We cover ourselves in layers of wonderful neoprene, we stay stoked. Our layer must be thin enough to allow us to wiggle. But thick enough to insulate our bodies against death.

Such a delicate balance. 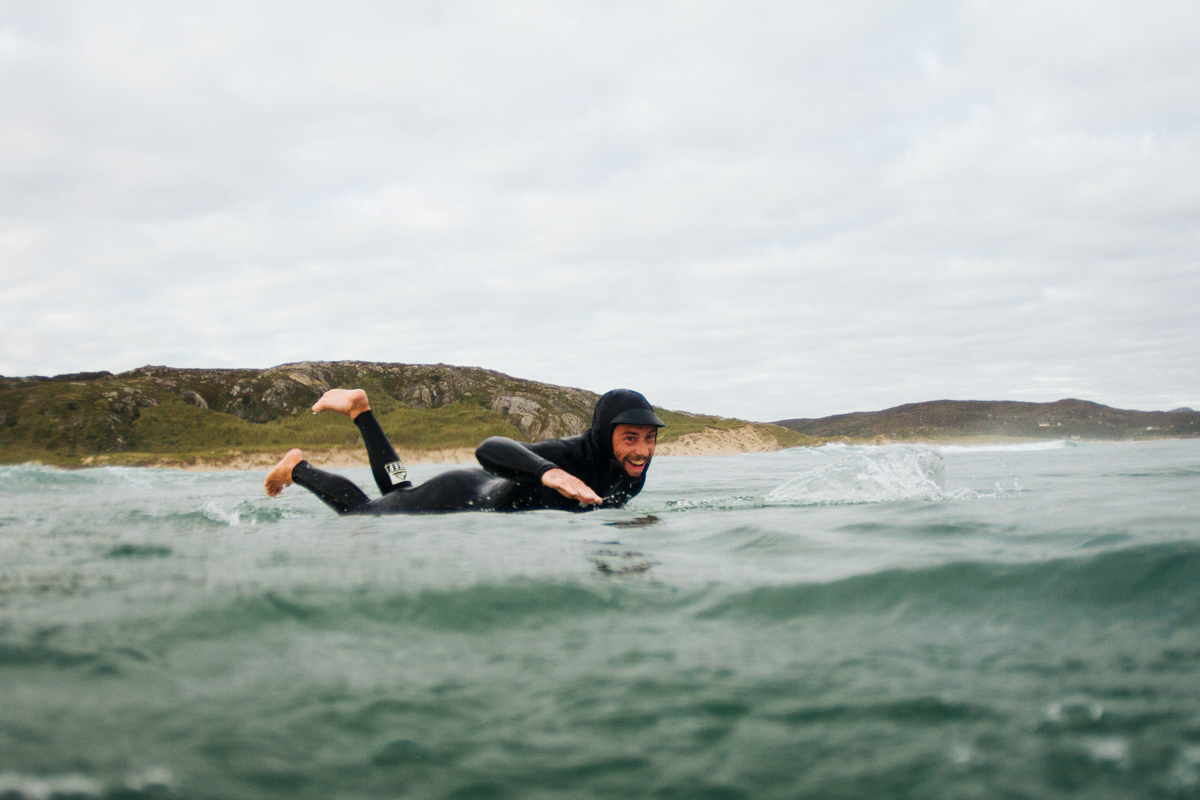 Hood but no boots. Hmmmmm. Could it be a cross-stepping thang? Maybe. Mike Lay sees off the sinister threat of ice cream head while simultaneously making sure his toes don’t overheat. Hate it when that happens! Photo: @lugarts

*Exception: Hooded suit no boots. Championed in California and oft in Patagonia rubber atop log/single at a boulder-lined pointbreak. While it may seem dysfunctional (if it’s cold enough for a hood surely your feet are fecking freezing…?) it’s actually not a bad call on that late autumn morning when the air is frigid but the water still not too bad. Dangerously hipster-ish maybe, but hey. It’s a free country!

2. The words “Can you do me up/undo me?” in reference to the putting on or taking off of a wetsuit should never be uttered by a fully grown man or woman. If you can’t get a 21st century wetsuit off/on entirely by your own means you’ve either a) got the wrong wetsuit b) got the wrong sport c) both

3. Urinating inside one’s own wetsuit during surfing is not so much a preference as a fact of life, an unbendable, inevitable law of the universe. Enjoy it a bit, but not too much.

4. Peeing after exiting the water while still suited probably means you have will power issues. Try to enjoy it slightly less than (3), but still a bit.

5. Peeing before surfing, e.g. in car park or on the walk down the beach is OK as long as you acknowledge it with a gag like, “I think there’s something wrong with this suit, look… (guffaws)” If not, if you do it in secrecy, but are then rumbled, well it’s not ideal.

6. Accidentally flicking boot juice (read: piss) on an already changed friend or bystander’s leg while taking awkward boots off seated (on the open boot of a car) is OK as long as you apologise reasonably shortly after chuckling quite a lot. If said bystander is wearing light-coloured chinos, well that’s their lookout. It’s winter, for fuck’s sake.

7. Flicking boot juice on purpose is strictly prohibited. Get a grip.

8. Having a signature wetsuit colour scheme is OK if you are being paid by that wetsuit company or under 14. If not, not so much.

9. Deliberating choosing a colourway to match your surfboard spray is discouraged. Although accidents will happen (yeah right!).

10. At no point should any bare flesh appear between cuff of sleeve and glove or ankle cuff and boot. Never.

11. Carrying gloves/twatcap in hand to the water’s edge then putting them on there is… not so much not allowed as just completely pointless. Like, why? Just put it all on at the same time. 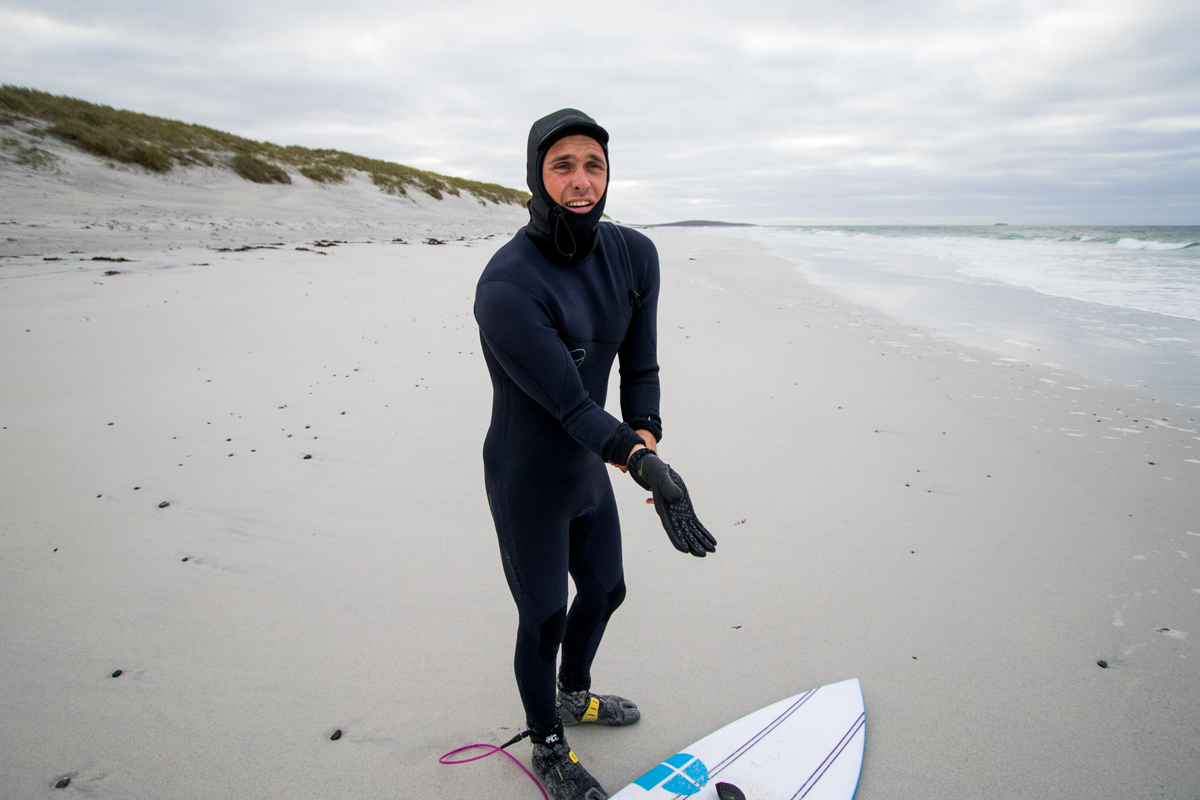 Lord Oliver of Adams has spent so much time surfing in the far north, he can put his rubber on in any order he wants. Gloves on at water’s edge is fruity, but it’s his call. Photo: @lugarts

12. Trying to make chitter chatter with someone in a hood is fine but if they have to pull the hood off the ear and go ‘Huh?’ more than 3 times you’re taking liberties. It’s like, this better be fucking good…

13. Conversely, pretending not to hear or see folk you don’t really like due to hood is absolutely fine, in fact, hood-as-c*nt-shield is one of best things about surfing in winter.

14. If you drop in on someone and pretend not to hear them call you off due to your hood, it’ll be very hard for them to actually prove in front of a jury of your peers that you did in fact hear them perfectly well. Even so, it’s not really that cool. ‘Sorry I faded you, I’m wearing a hood’ is about as valid a defence as ‘Sorry I crashed my car into a primary school playground, I didn’t look.’ 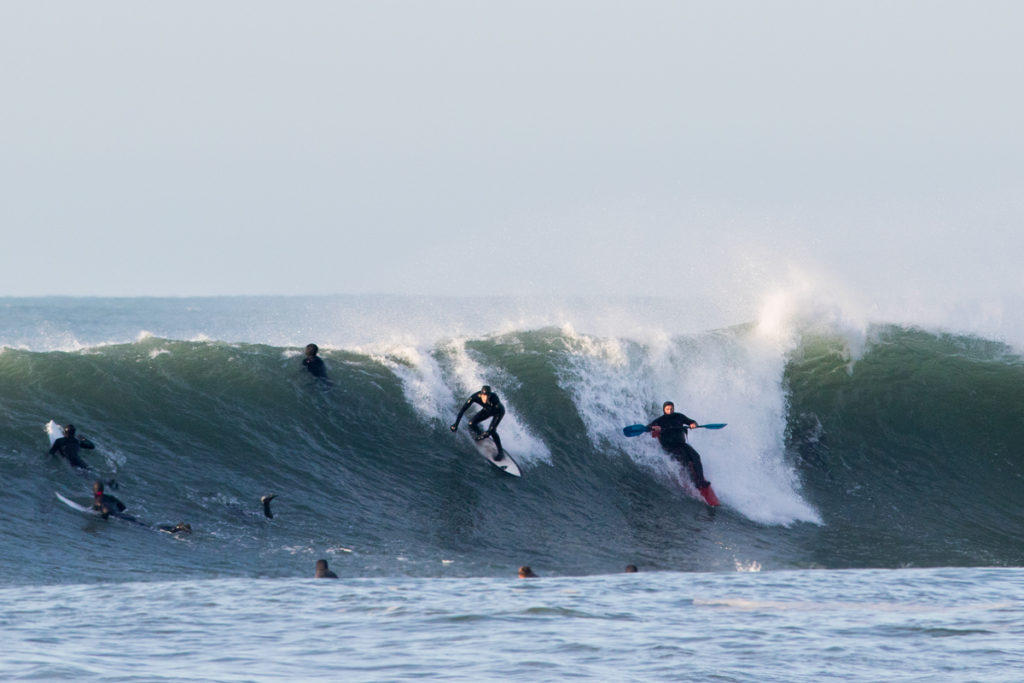 “My client was unable to acquest the yammering pleas of the goat boater, due to audible obstruction from his neoprene head cover, your honour.” Photo @lugarts

15. Getting changed logically follows a pattern of: Shoes and socks off. Stand on em. Trousers off. Step into wetsuit legs. Boots on. Jacket, sweater etc off, top of wetsuit on. In the reverse order, the short gap between having taken the wetsuit top down, clothed the torso and de-wetsuiting the legs should be kept reasonably brief. This is the only time it acceptable for a man to be naked from the waist down and clothed from the waist up, apart from when in a secure mental institution in one of those nighties.

16. The jury is kinda still out on the towelling robe things. I mean, they’re probably pretty handy, but, at the same time… really?

17. It’s OK to hang your suit up in the shower religiously having rinsed it lovingly and de-sanded it with forensic detail, so that’s it always dry for the next sesh. But don’t expect the surf to be any good, ever, you control freak.

18. It’s fine to leave your suit outside the entire winter, never really letting it dry, but don’t expect the Victoria Cross/Congressional Medal of Honor. Masochism is your own weird trip, darling. 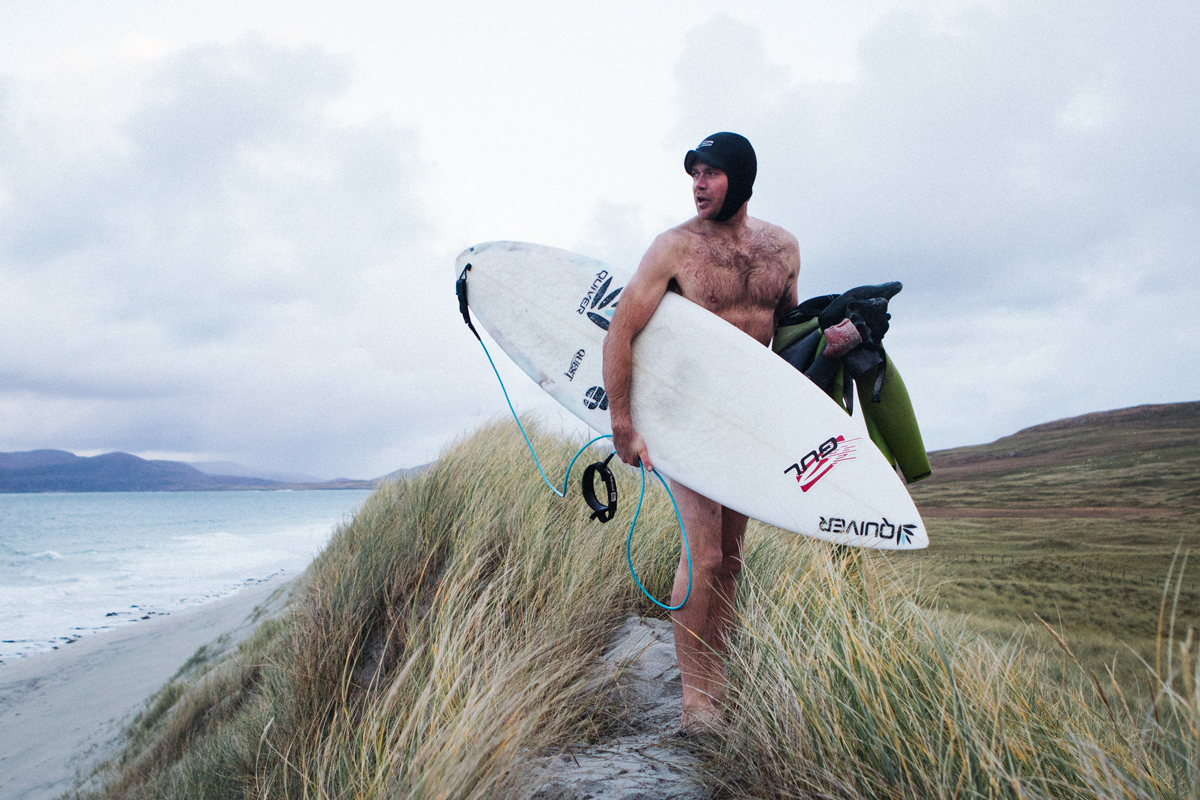 Egor Harris ain’t scared of a bit of winter. Demonstrating the fully nude except hood in public vibe, which is a niche kick that some people would probably pay good money for. Photo: @lugarts

19. “I’m not gonna surf this afternoon, my wetsuit is still wet” is a perfectly acceptable thing to say when the waves are firing – on a camping trip to the Arctic island of Svalbard during a particularly cold snap. Otherwise, harden the fucking fuck up.

20. Getting changed inside your car is usually more trouble than it’s worth. Seriously, you nude on the passenger seat, damp suit getting all bits on it from the carpet in the footwell… nah.

21. Driving in your wetsuit is fine for journeys of ten minutes and under. If said journey is being taken after having failed to make it out the back at the main beach and running for shelter in a cove, the driver’s head should be hung a couple notches lower in shame. Contrastingly, if you paddled out at a spot, realised it’s too small/crowded and are headed to a maxed out beachie just to get away from c*nts, bravo.

22. Terrestrial activities such as eating, drinking, reading the paper, smoking a pipe and looking at your phone are not to be performed whilst wearing a wetsuit, unless you are doing water patrol at the Maverick’s comp/stunt work on Pointbreak 3 and are on a union-stipulated break.

23. Wearing a rash vest under your wetsuit is a great idea, so long as you travelled to the beach in your time machine, set to 1993.

24. Wetsuit comfort accoutrements such as a pump action insulated flask with shower head for after surfing, or even just a flask of hot water is fine for exceptionally cold snaps, just to get her done. But not to be relied upon every sesh.

25. If you must have a receptacle for in-car wetsuit stowage, rubbery bucket over rigid, square (rail-dinging) box. Maximum of two per vehicle (how many of you are there in your wretched rent-a-crowd, anyway?). If sharing a receptacle, your wet wetsuit goes at the bottom, unless it’s your box. Furthermore, wetting a co-passenger’s dry towel, pre-surfing with your wet wetsuit is very, very poor form indeed.

26. Just like surfboards, the correct number of wetsuits to have in quiver at any one time is x. Where x = as many as you fucking like.