Worldwide Memorial Paddle Outs Honour The Pioneer Of The Wetsuit

The life of legendary waterman Jack O’Neill was honoured spectacularly in a worldwide series of memorial paddle outs on Sunday 9th July and Monday 10th July 2017. The moving display united surf communities across the globe with over 3,500 surfers joining hands in the world’s biggest floating memorial sequence to date. Jack’s hometown of Santa Cruz, California led proceedings with simultaneous paddle outs taking place in Australia, Canada, Portugal, England, Belgium, France, the Netherlands, Japan and South Africa.
With no greater way to honour a man whose life was led by the ocean, the memorial paddle outs were a chance for surfers across the world to pay their respects and remember the man who “just wanted to surf longer.”

“Every time you are pulling into your wetsuit and jumping in the water, we can all thank Jack for just wanting to surf longer – so thank you Jack!” – Brian Kilpatrick (Marketing Manager of O’Neill Wetsuits):

As the clouds parted and the fog lifted in Santa Cruz, a huge crowd of surfers gathered at Pleasure Point in Santa Cruz next to Jack O’Neill’s house to form the biggest memorial celebration the surfing world has seen to date. Over 2,500 people joined the celebration on surfboards and in boats in the water and lining the cliff. With the O’Neill family on Jack’s legendary sailing yacht in the centre of the circle, former world champion and close friend of the O’Neill family Shaun Tomson honoured Jack as one the pioneers and founders of the surfing industry. “For all of us floating out here, some of the best moments of our lives have been spent in the water – waiting under the great dome of sky and catching that perfect wave that has taken us to where we need to be,” said Tomson.

The impressive ring of surfboards drifting on the horizon attracted crowds of spectators who lined the cliffs and beach below. The moving display symbolised the life of a fellow surfer whose sheer passion changed the face of surfing forever. After paying their respects, surfers paddled back to the shore yet some remained in the water catching waves in memory of Jack.

Edwin Jonkers (CEO O’Neill): “The global turnout to celebrate Jack’s legacy was truly amazing. It is evidence that Jack’s desire to surf longer and invention of the wetsuit changed the surfing world and beyond. His passion, values and lifestyle will be our ongoing inspiration for O’Neill.” Jack was born in Denver, Colorado on 27th March 1923. He moved with his family to California, where he acquired a love for the beach early in his youth. Following service in the US Navy during World War II, Jack moved to Ocean Beach in San Francisco in the early 1950s and immediately began experimenting on his kitchen table with various materials designed to protect against the frigid ocean water in Northern California. He said, “I just wanted to surf longer.”

By the 50s, Jack had both invented the first surfing and bodysurfing wetsuits and opened his first surf shop near Ocean Beach. He also coined “Surf Shop,” a term for which he later received a Registered US Trademark.

Inspired by the growing surf scene, Jack moved with his growing family 75 miles south to Santa Cruz and opened his next surf shop. Shortly thereafter he began making surfboards, promoting the first surf movies and producing wetsuits for the expanding population of surfers in Santa Cruz and throughout California. 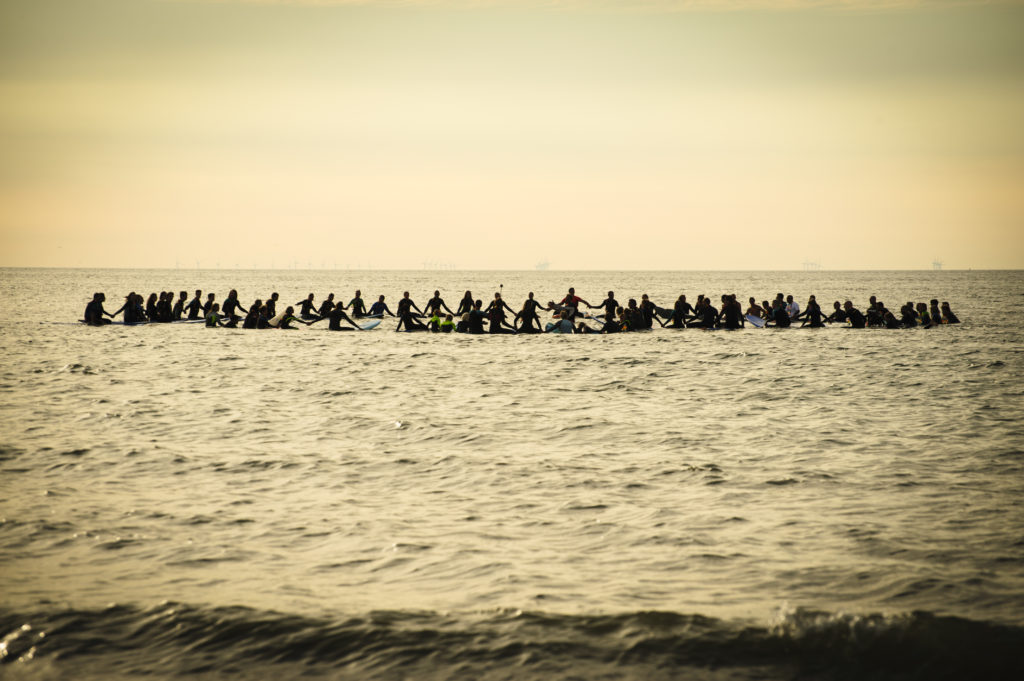 The surfing craze soon expanded way beyond California, and Jack rode that wave better and longer than almost anyone in the surf industry. By 1980 O’Neill had become a thriving international business and the world’s largest ocean recreation wetsuit designer and manufacturer. Jack viewed what he did as a passion, and was more surprised than anyone that the business grew to the point that it did.

Most recognisable for his eye patch and his beard, Jack was often seen driving around Santa Cruz in his convertible Jaguar. The eye patch resulted from his surfboard hitting his left eye while riding a wave.

In 1996 Jack established O’Neill Sea Odyssey (OSO), a marine and environmental education program which was his proudest achievement. Remarking on OSO, Jack said, “The ocean is alive and we’ve got to take care of it. There’s no doubt in my mind that the O’Neill Sea Odyssey is the best thing I’ve ever done.”

Paying homage to Jack, pioneer, maverick and surfer, O’Neill presents a new film, I Knew Jack O’Neill, directed and produced by Peter Hamblin. Detailing the story of the wetsuit and the first ‘surf shop,’ the mini documentary reveals Jack O’Neill’s life and adventures.

Memorial contributions in support of Jack’s love of the oceans may be sent to http://oneillseaodyssey.org