Home » Confessions of A Cloudbreak Virgin

Confessions of A Cloudbreak Virgin

Who also happened to be making a CT caddy debut

You don’t get a second chance to make your World Championship Tour caddy debut at the Fiji Pro, which is fine, because I didn’t need one. I pretty much nailed it.

Tavarua Island on the other hand, may yet live through sea-level rise to rue the unusual version of itself presented upon my arrival.

My very first impression of the iconic Fijian resort, a vista burned into my optic nerve that is to this today unshakable, was the far from insignificant bulge of Heitor Alves’ Speedo-clad gusset, rotating acrobatically at eye level.

You see, as our little boat approached the famous heart-shaped coral, sand and palm island idyll, then hosting the Globe Fiji Pro, among our crew was Adriano Desouza, who hadn’t organised (pricey) accommodation on the island in advance, and had been sportingly offered a bedroom on the mainland in the Globe Europe house at Plantation Village (where I too, had the good fortune to be billeted).

As we sped toward the beach on the back side of the island, presumably ADS texted Heitor to let him know of his pending arrival. Heitor was clad in nothing but a pair of black, slightly moist Speedos, I’m guessing a 28 waist, and the moment our boat cut its engine just off the beach, he performed a series of celebratory backflips and yelps to herald his compatriot’s arrival.

I was getting something out of the bottom of the boat, but Heitor’s exuberant shriek made me look up at just the right time to frame his packet, somehow slowed down in my mind’s eye, as he displayed beautiful backflip technique; legs slightly akimbo, taught physique glistening in the tropical morning sun. We beached, Alves and Desouza cuddled. 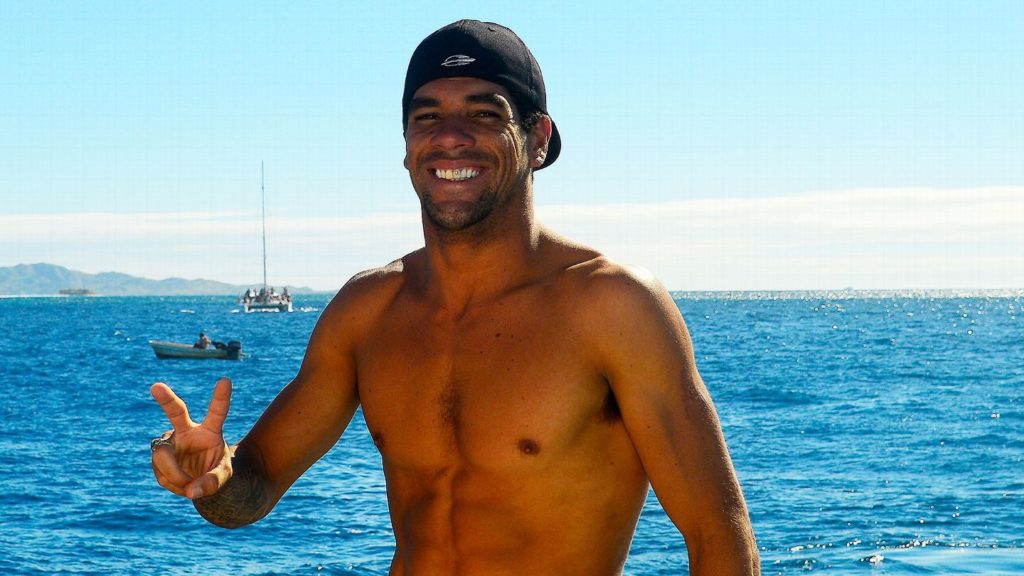 I picked up a couple of errant plastic water bottles from the beach and strode toward the resort and new adventures, certain that what I had just witnessed could only be a good omen.

A couple of hours later, the sun had further risen in the endless southern sky and I was one of but a half dozen humans in the water at Tavarua’s offshore reef known as Cloudbreak, one of the finest surf spots on earth. Surfing’s then most expensive satellite weblink was beaming a live broadcast to the world, while I shared the hallowed coral shelf with some of Round 4’s combatants. There was Kelly Slater and Damo Hobgood, paddling out for their heat. There was Bobby Martinez and Adrian Buchan surfing for a spot in the Quarters. You see, I had got a Tavarua boat out to the big event boat, from where all the event logistics were run; cameras, interviews, beach marshal, athletes. I’d seen Ace there whom I knew, he’d asked if I could caddy his back up board for his heat. Of course I could. 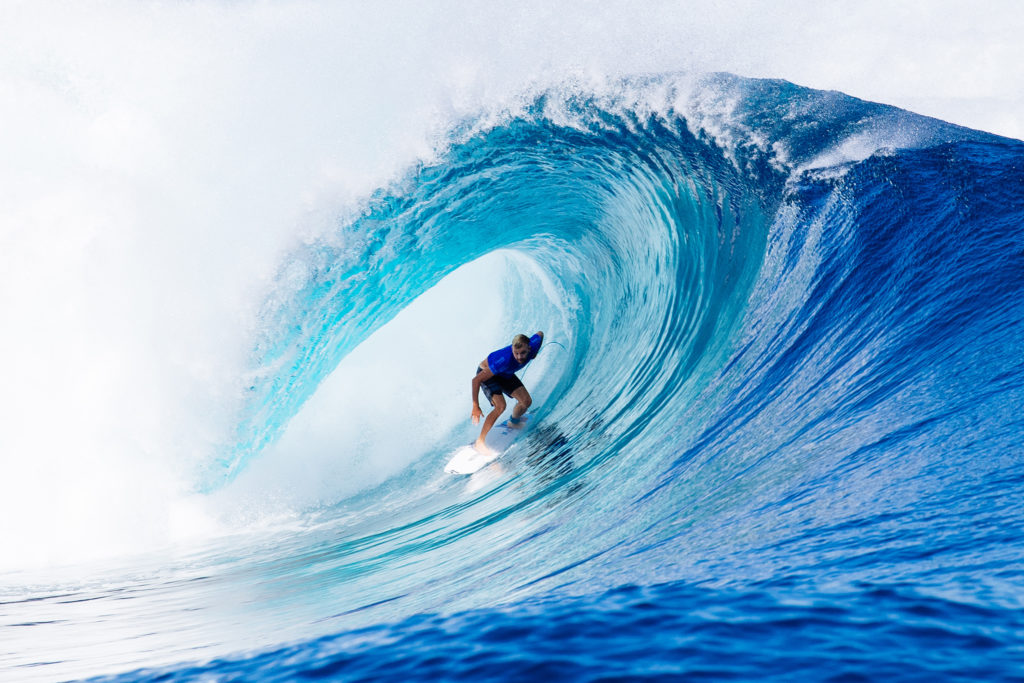 I’d stroked out to where the previous heat caddies were and hung back a bit. Tavvy, and the event itself, is basically run by Americans, they’re pretty confident and vociferous, given that they’re tens of thousands miles from home, there’s a general authority to their demeanour. One water patrol guy immediately fixed a gaze on me. You know when you know you’re not really legit, and you know that they know that you know? Well, that.

He revved the jetski toward me and said something into his walkie talkie like “Yeah we got a kook in the lineup, want me to extract on Code 42?” I had the impression that nothing I did or said would have any effect. If I burst into flames atop Ace’s JS, he’d still have faithfully followed whatever command came down the walkie talkie.

“Want me to take this guy out?” he said louder, ski inches from Ace’s JS, now potentially threatening my one job, to look after Ace’s precious backup board. He was pointing down at me, but still looking off into the middle distance, listening to the walkie talkie. Then, directed at someone else on a ski. “HEY, NEED ME TO LOSE THIS GUY?”

Needless to say, this unwarranted display of hostility had no effect whatsoever on my ability to caddy. I stuck firmly to my guns.

Taj and Tim Reyes surfed the heat before Ace’s. Sets were pretty nice, running a bit fast, but getting better. Tim Reyes was being coached by Chris Gallagher, a shaper and a very knowledgeable technician, who was saying stuff to me like “He needs to transition off the bottom, huh?” I just let that hang, unanswered. I was in full character, and my character was a silent type of surf technique savant.

Teebs meanwhile had Johnny Gannon, his physical trainer, looking after his back up – the one from Bra Boys who says arguably the movie’s best line, “It was a fair fight, and we won.” Gannon was disarming, friendly. “Hey mate” he offered, neither probing my surf knowledge nor questioning my credentials. Gannon was stoked, anyway. Taj had two 8’s and Reyes had a combined 3 out of 20.

Bobby vs Ace was super tight. Surf was pulsing now, with some tubes, but not perfect. It’s a tricky wave that you kind of need to pump and stall at the same time, even lip turns are projected rather than really smashed down, as the waves just keeps trucking down the reef. Ace was looking good with a couple of strong sixes and I started to think about how Ace and I would figure out the prize money split; or if in fact I’d convince him we should just donate it all to a local grassroots environmental organisation.

Five-minute warning, Bobby had an 8. Ace was in a spot of bother. 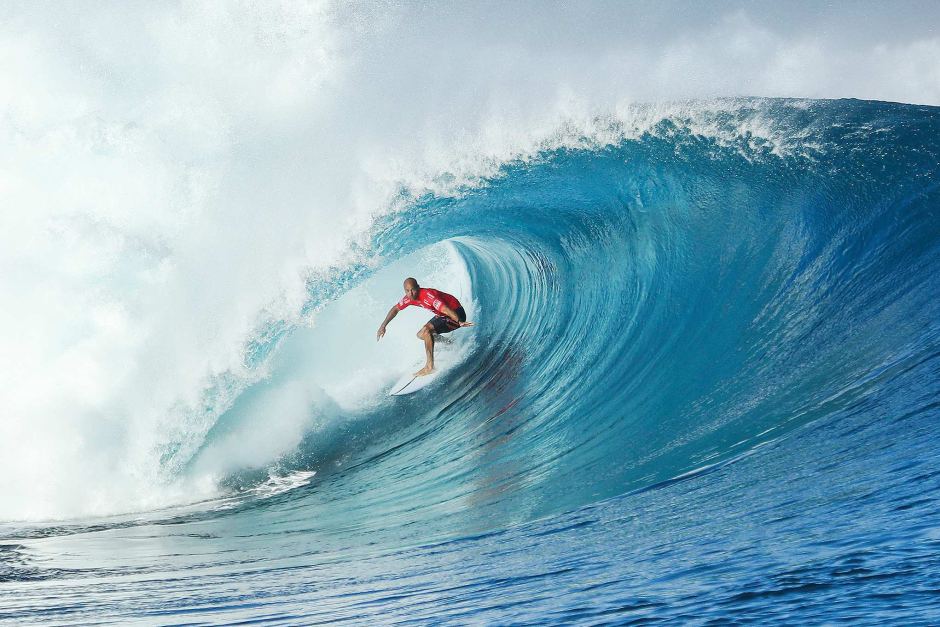 Paul can’t remember the finer points of Slater’s heat. However, the numbers suggest there’s ever chance we won it. Photo Kelly Cestari // WSL

Kelly, up next vs Damien Hobgood wasn’t staying on Tavvy, Namotu or at Plantation. He was staying somewhere on the mainland, The Hilton I think, somewhere with a golf course, and arriving for his heats by helicopter, like any good environmentalist. There was some talk about Kelly’s chances; if it starts barrelling, he’s in trouble.  Or was it the other way around? “What do you think? Gally asked. I thought about something profound and demonstrative that I was part of a new wave of coach/caddy talent with fresh ideas and a more holistic approach.

After a reflective pause I said, “Well, it’s six of one and half a dozen of the other…”

I can’t remember much about Kelly’s heat, besides his caddy, Belly saying, “What the fuck are you doing here?” as he reached the caddy spot in the channel on Kelly’s backup. I said I didn’t know. When someone loses a heat, best to avoid all eye contact and conversation, even with those as level headed as Ace. I put his board back on the boat, trying to forgive Bobby for not only cheating me out of an opportunity but also that local Fijian grassroots environmental organisation out of much-needed resources.

And while there is some truth in what they say of time being the great healer, I’m still not sure I truly have.