Home » How (Not) To Watch The Vans Triple Crown: Haleiwa & Sunset

How (Not) To Watch The Vans Triple Crown: Haleiwa & Sunset In the bleak midwinter… make the most of pro surfing’s unique free to air live broadcast from Da Islands!

The Vans Triple Crown is upon us, the thrilling climax to another year of competitive pro surfing.

In terms of gathering of the tribe vibes, it’s kind of a cross between the Hajj, the Eisteddfod… and Spring Break. The North Shore aka the Seven Mile Miracle is the hallowed, sacred ground upon which anyone who wants to be anyone in surfing needs to perform. It is the cultural epicentre, the keeper of the flame, the pinnacle of surfing’s self-reckoning.

In terms of the cred of a big result, in terms of the prestige of a QS win, with a notable exception in the form of the Volcom Pipe Pro, no other QS events come close.

There we’ll see our 2019 World Champ decided, as well as sort out the Top 22 wheat from the bottom 12 chaff – hopefully in big, frightening surf.

I went to my first Pipemasters in 1995, the Machado Slater high five / Occy comeback year, and I’d rate it up there with… well, crowd-wise probably with the Chesterfield vs Grimsby season opener in 2017/18 (attendance about 8000).

Actually that’s a tad generous, maybe not nearly as many people attend Pipe as English football’s fourth tier action from the Proact Stadium in Derbyshire, and those that do certainly aren’t as drunk/noisy as the Grimsby away support (rascals shouting “Fiiiiiiiiiiiiiiiish!”).

But in terms of drama, in terms of an epic spectacle, well it was up there with anything you’d care to mention.

With the qualification shit fight, the local North Shore specialists, as well as CT ers that wouldn’t normally be slumming it on the QS if not for Triple Crown prestige, the talent level is bonkers. Throw in the fact that the surf can and will range from 2-3ft to 12ft plus Hawaiian, and the spectacle demands your keen attention.

The other part of the appeal is timing. Just as our mid-high latitude European home is set in for extended period of dark and grim, the Triple Crown webcast offers that ideal escapism. You’re but a few clicks away from a Seven Mile Miracle mind palace.

Tune in for palm trees, trunks and general surf balminess. The whole thing has a relatively lo-fi feel, that particularly North Shore paradoxical mixture of laid back chill with the ever-present threat of pain… or death.

There are two types of events best watched online. The ones happening down the road (I love watching the Quik Pro France from home, even though I can hear the beach announcer if there’s a light seabreeze from my garden) and those happening in the tropics on the other side of the world, in the bleak midwinter.

Timing-wise, the islands are 10 hrs behind GMT, which is pretty good as a wake up, tune in vibe.

Stay in bed, grab a cup of steaming Java (or Yogi Tea – hibiscus with ginger and liquorice) and get some North Shore vibes beamed into your scratcher to start your day off right.

With a 7am wake up here, it’s 5pm there, so you’ll catch the last few heats and then the Post Show, which has recently become the best part of any surf broadcast.

Then, after a cruel, cold winter’s day fighting crime, saving the planet or merely furthering your understanding of the world we live in, get home from work, school (plus detention) or the picket line around 6pm, and it’s a warm, delicious 8am in da islands, when the whole thing fires up for the day.

Fix yourself some whole food plant based cuisine, I don’t know, maybe a quick carrot dhal or some vital spiced butternut soup (throw a pitta brushed with oil, crushed garlic and (loads of) chilli flakes under the grill while you’re at it, you mad basterd), pour a glass of Graves and regale. 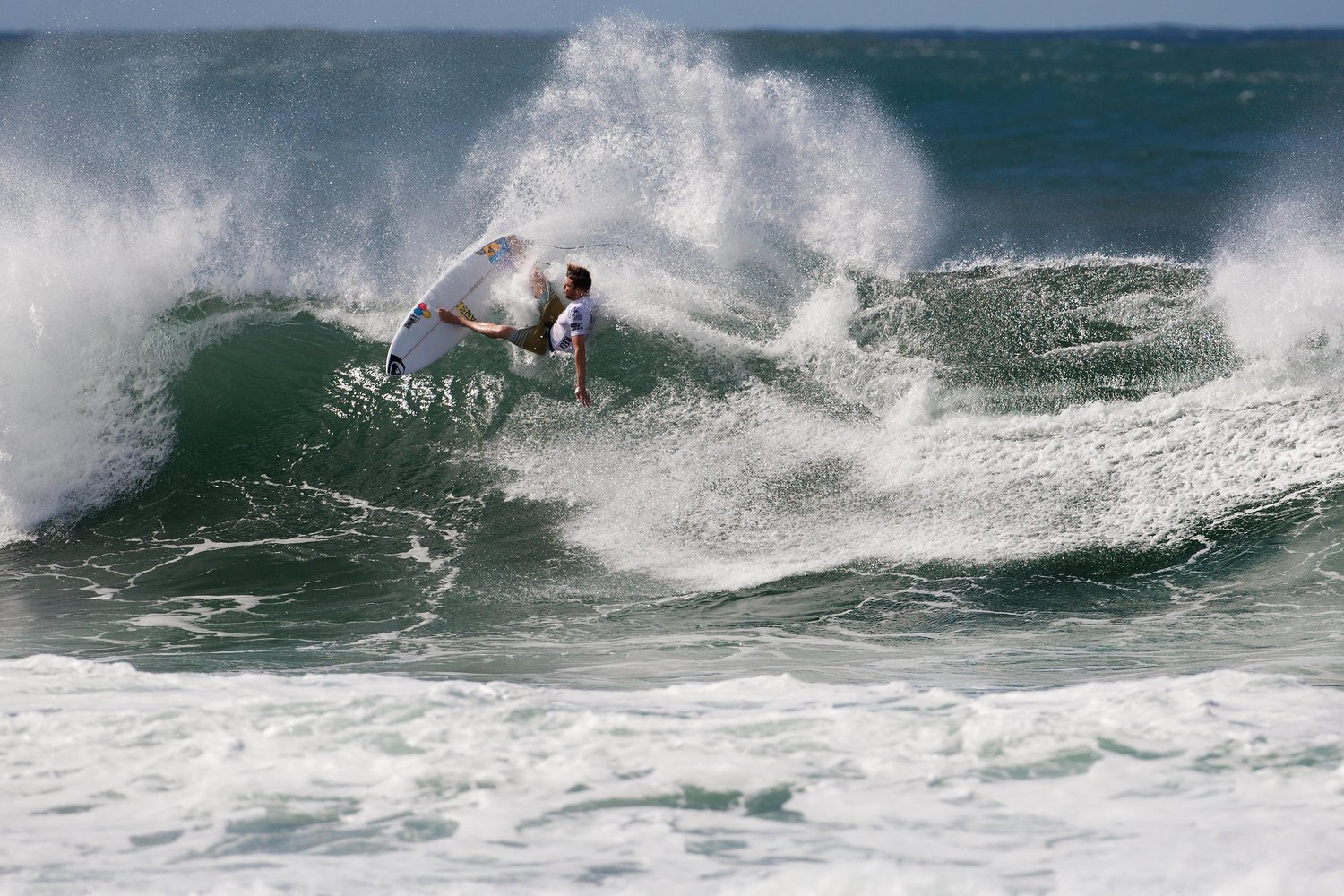 Dane, Haleiwa 2012. One of surfing’s ‘you remember where you were when’ moments; although you can’t exactly, but it was probably at home smoking a bifta with your morning cuppa, central heating cranked, glued to your computer. Photo: Cestari/WSL

(‘W’ is actually a ‘v’ as in Ha-vai-i being the true pronunciation of Hawaii).

Without meaning to state the obvious, when it’s solid, it’s great to watch. If it’s head high — which it quite often is — not so much.

One of the unique and disconcerting things when surfing this wave is that the rip takes you deep towards the harbour wall, when you might expect it to go the other way. When it’s big and burly, the rip rages, so much so that you can get caught on the wrong side of the peak, and have to prone in and do the walk around, a fate that once befell Dog Marsh. He reports that he “hasn’t surfed Haleiwa since.”

The best thing ever happened at Haleiwa was almost certainly Dane’s turn, but other than that, it’s held first and it’s generally the least epic of the trio. If you’re gonna skip one, etc.

However, don’t. Being held in mid November, Haleiwa is great for getting your Hawaii on early and getting acclimatised. You know, used to your (their) boards, used to the food (they’re talking about eating).

Get used to the rhythms of a ten hour time difference broadcast, get a feel on the season, who’s in form, who ain’t. You must’ve heard the commentators crap on about the tactical genius of ‘showing up early’ for events? Like how Desouza masterminded his World Title by… wait for it… practicing at the venues where the events are held.

Well Haleiwa is your chance to do the same – show up (online) early, for a much more fruitful Hawaiian campaign. 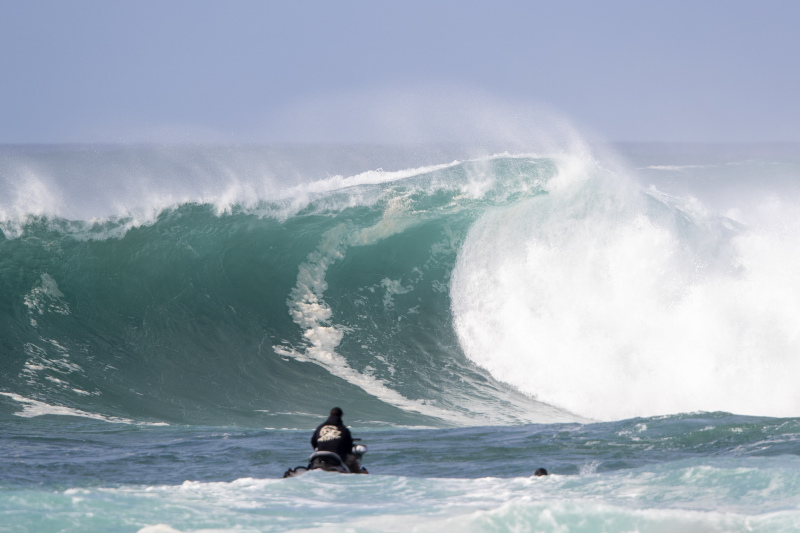 “Good from far…” Sunset’s notorious inside bowl, where a clamping curtain or an over-exuberant floater can and will be the undoing of a year long qualifying campaign/an entire career. Photo: WSL/Heff

The one venue that’s resisted the 21st century’s radical downsizing of equipment, Sunset, unlike almost any other competition wave in the world, still requires specialist equipment.

Watch Pipe from 1992, and they’re surfing 6ft waves on 7ft plus boards. And yet while today’s surfers would employ a good foot less of board for same sized Banzai Pipeline, they’d be on similarly lengthy equipment at Sunset.

Sunset is more about the laws of physics thing than design/technique trends, and as such presents a unique challenge at crunch time in the QS season.

Being pretty far out to sea makes it hard to watch from the beach, while your online vantage point brings you all kinds of angles on the action/carnage not available to the beach goer.

However it is worth pointing out that Sunset is unique as one of the last places you can still watch a major event from your vehicle (R.I.P the old La Nord car park in Hoss), hence pick-ups with couches and cool boxes in the back are still the very finest core lord seats in the universe.

While the wave presents a radical surfing experience to the layperson, performance-wise… well we’re talking lots of cutbacks, off the tail of mahoosive boards. The squeeze is the qualification death scramble, and heats that might be wholly forgettable under usual parameters suddenly become compelling.

At Sunset, coming 3rd instead of 4th when getting knocked out can decide careers. And when it’s solid, that elusive 2 point ride that might be the difference between 4th and 3rd, or even that last turn that might turn a 3 into a 4 suddenly becomes almost more important than life itself.

Sunset’s waiting period runs into December, and ends just a day before the CT climax at the Banzai. So you’ve done the hard yards on the QS. You’ve put the hours in, you’ve proven your commitment.

You ready to step up for the Pipe Masters?