Home » Recommended Read: Children of The Tide By Nik Zanella

Recommended Read: Children of The Tide By Nik Zanella From surfing in Sri Lanka during the civil war to exploring the untold history of surfing in 9th century China, Children of the tide is one of the most compelling and unique books in the surfing space we’ve ever come across.

Children of the Tide is a new book documenting the radical journey of a surf punk along the Silk Road.

In 2006 Italian surfer and Chinese history enthusiast Nik Zanella happened upon a clay sculpture in a Chinese monastery, 600km from the coast, featuring a series of figures riding across waves on the heads of mythical creatures. It dated back to 1880, decades before surfing spread from Polynesia to the West.

The temple’s Abbot told Nik the work depicted living saints; “real people like me and you, who have followed the scriptures and attained enlightenment. They are enjoying life at its utmost. They are nong chao er, Children of the Tide.”

The statues were sculptured decades before surfing spread from Polynesia to the West. Nonetheless, China’s ‘surfing buddhas’ are riding a perfect green wave, utilising a modern sideways stance. And they also share ecstatic expressions of pure ‘stoke’, eyes fixed a few metres in front of their watercraft as if anticipating a promising wave section ahead.

This encounter served as a catalyst for a most unusual voyage of surfing discovery, driven not by maps and swell charts, but rather the meticulous translation and etymological study of poems and dynastic documents from 5,000 years of Chinese history. Nik’s quest led him from a dusty Venetian library to a muddy river in inland China- home of the Silver Dragon- where he discovered a long and tumultuous history of wave riding tradition, few in the West knew existed.

We included an excerpt featuring the culmination of his study in our latest print edition, which you can get your hands on by subscribing here. 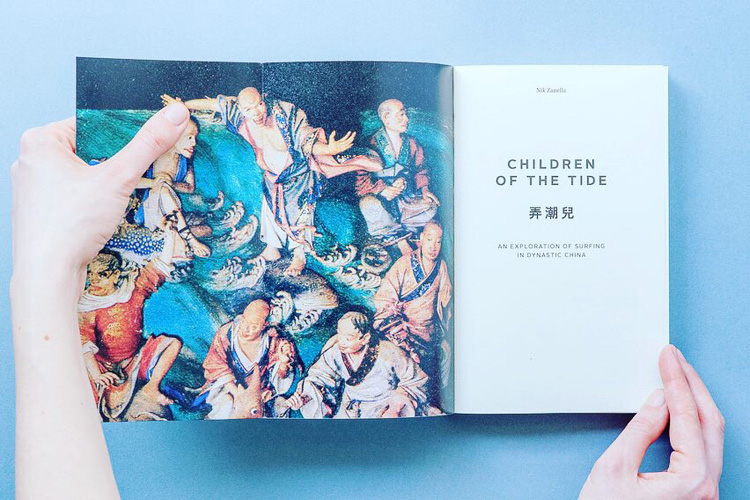 Aside from this fascinating central quest, the book meticulously documents the intertwined histories of surfing’s global development and China as a modern nation, as well as Nik’s personal adventures around the Med and to war-torn Sri Lanka in 1996.

The final chapters also contain some of the most well informed and insightful musings on the future of surfing in China; a subject often misunderstood by the surf media, to which Nik brings great knowledge and clarity.

Overall, the book is a perfect example of how surfing and all the travel, study and exploration it inspires, can be the perfect way into investigating a whole wealth of seemingly disparate ideas, cultures and histories.

Nik’s knowledge and passion of his subjects, as well his rigorous attention detail, combine with a dramatic narrative to create one of the most interesting and unique books in the surfing space we’ve ever come across.

You can buy a printed copy here. Or an E-book version here.