Images of surfing in Poland by local photographer Krzysztof Jędrzejak.

Despite boasting a cocktail of factors that traditionally deter surfers, including freezing weather and fiercely inconsistent waves, surfing in Poland is slowly gaining in popularity.

Wind generated swells march quickly, thanks to the low salt content, through the southern Baltic sea, before landing on Poland’s 300 miles of north facing coastline. They are greeted by a surf population estimated to be around 2000, however the sport is growing with each year that passes, with the nation joining the International Surf Association back in 2005 and hosting its first national championship in 2007.

We recently caught up with Krzysztof Jędrzejak, a photographer and surf school owner to tell us more about Poland’s developing passion for surfing and show us some of his favourite images from the country. Here’s what he told us:

“I’m 33 years old and I’m a full time ISA surf instructor and surf photographer. I live in city of Gdańsk in Poland by the Baltic coast where we run our surf school. (www.learn2surf.pl) The surf scene in Poland is growing very fast. Our juniors are starting to compete in WSL events, there are already surf schools, surf shops with top brands offering their boards and clothes. I think that there are more than 100 surfers visiting our lineups during summer season and more and more beginners are starting to surf in the Baltic Sea.

It looks like in the next five years surfing is going to be very popular here. Maybe more surfers from other countries will visit Poland to surf Baltic waves.

I think it’s a good thing- although it will mean more crowded line ups. But it’s the result of developing standards and easier access to this sport. And not everyone likes to surf in frigid conditions, if we had summer all year round then it would be a problem.

I started surfing in Baltic waves around 10 years ago. It gave me so much experience in checking forecasts and choosing the right spot. It’s a crucial thing here.

We surf all year round. During winter there are more storms and northern swells give us good quality waves. In winter the water temp is around 2°C and the air below 0°C. The line ups are empty, you can experience real raw baltic nature.

That’s what I love the most about surfing in the Baltic. For me it’s also the biggest challenge to take photos in such harsh conditions. There are still so many unexplored places so finding new spots is an amazing feeling.” 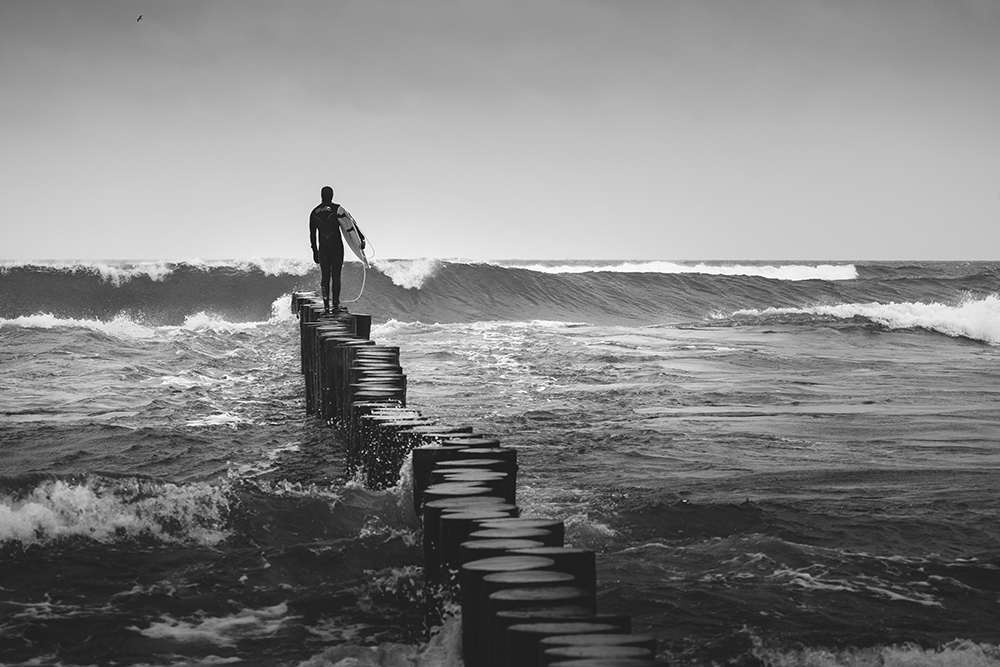