Ten up and coming British surfers to watch

Here are ten up and coming British surfers to watch over the next few years:

Hailing from Bude, 19 year old Jobe Harriss is one of the most promising up and coming competitive surfers in Britain. He surfs with power and precision, both on rail and in the lip, with his smart and calculated approach allowing him to tick all the boxes with regard to the judging criteria. Accordingly he has been enjoying some great results this year on the WSL European Pro Junior tour and he’s currently sitting in 6th on the rankings, just two places away from the qualifying zone for the World Juniors. We caught up with Jobe after the first event in Portugal to find out his goals for the year ahead:
“This year I’m hoping to win one pro junior at least, I would have liked to have won the first one but it was good to get a good result. My main aim is to finish the year in the top 4 and If I can achieve that then my whole sort of future game plan changes and gears a lot more towards surfing rather than going to uni. At the moment my goals are split but If I make it on to the World Juniors I would sit down and re-access again, so my goals will really reflect whatever place I get this year on the Euro rankings.” The final event on the circuit starts September 16th and we wish Jobe, along with the rest of the British contingent, the best of luck. Here’s a video, courtesy of Joel Gray/ Surf Solutions, of Jobe warming up for the comp last month in Portugal:

Also from Bude, 11 year old Stan Norman is one of Britain’s mostly hotly tipped young surfing talents. As well as dominating his own age category (U12’s) Stan has recently started getting results against surfers up to 7 years his senior, achieving joint 5th in the U18’s division at Boardmasters and winning the U16’s division at the Nightsurf. Even amongst a particularly talented age group, Stans energy, power and flare set him apart from the rest and provided he can stay on the right track and keep developing into his teenage years, we can expect big things from this little North Cornish grom. Check out this clip of Stan, filmed over a few coaching sessions by Joel Gray at Surf Solutions:

16 year old Harry De Roth from St Ives has been on the radar for a while now and with a solid rail game and substantial aerial prowess he’s cemented himself as one the countries best junior surfers. Like Stan he has enjoyed competitive success across multiple age categories- both making it to the semi’s of the Open mens at Boardmasters earlier this month and currently leading the U18’s UKPSA rankings. Harry is also competing on the WSL European Pro Junior this year and whilst he has not yet seen any significant results yet, he still has two years left in the junior ranks to hone his skills. Check out little clip of him free surfing, filmed over a few weeks in Cornwall earlier this year:

At just 13 years old Ellie has already enjoyed a spate of pretty incredible results in the U18’s and Open Women’s categories, with highlights including a 4th place finish in the U18’s Rip Curl Grom search ASIA, 2nd place in the Open Division of the Night surf and 1st place in both the u18’s and u16’s divisions at the British Nationals this year. Ellie spent last winter away from her home town of Bude, travelling around Indo with her Dad and brother (Liam Turner) and is now in France for the summer. To say she is one of the most promising female talents Britain has seen for a while is not an overstatement and although perhaps not quite as on the radar as the boys in her age category, with the way Women’s surfing is going, we’re pretty sure she will be soon.

16 year old Angus Scotney is fast becoming one of the best power surfers in the UK, with an explosive repertoire on both his for and backhand, throwing arc’s way beyond his years (see screen grab below). Despite promising competition results both at home and in Europe this year, Angus is keen not to restrict himself to just being a contest surfer telling us earlier this year that he wanted to keep all his avenues open and continue to create clips and get shots as well as win heats. Like Harry, Angus has a few years left to grind it out on the WSL European Pro Junior and if he keeps putting together heats like this one, which earned him a combined total of 16.50 at the Caparica Pro Junior earlier this year, we reckon he’ll be heading up the rankings in no time:


Angus is also currently working on a new clip, here’s a sneak peak screen shot from it: 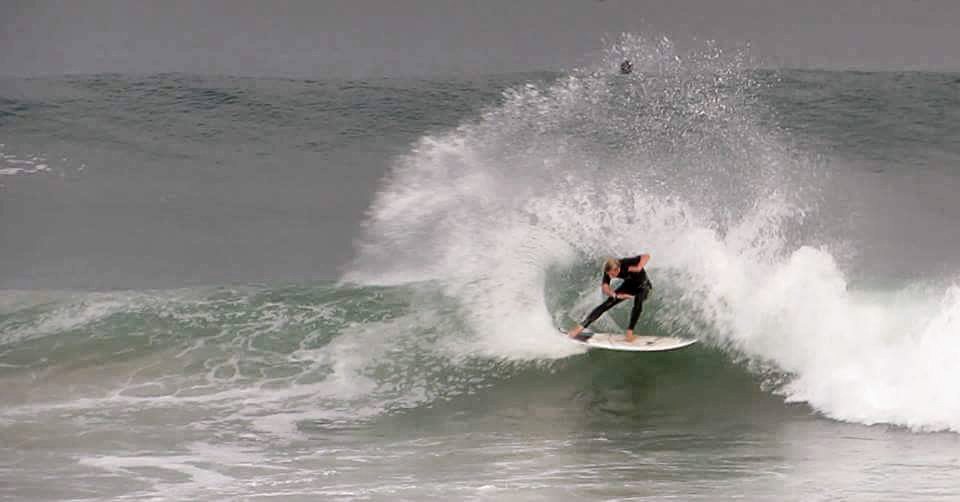 Liam, also 16, hails from Polzeath in North Cornwall and is already becoming well known as one of the best aerialists in his age group. With an elastic and dynamic approach to his surfing Liam looks set for a fruitful career as both a competition and free-surfer. Here’s a couple of waves, filmed over the course of a few sessions last year:

If we we’re keen to categorise each of the surfers on this list as either a free-surfer or a comp surfer (which we aren’t particularly) Luke Dillon would certainly be the easiest to place. At 20, Luke’s goals lie solely in competition results, as he gears up to join the WQS full time next year. Luke’s tenacity and solid repertoire of manoeuvre’s have regularly seen him onto the podium in British comps as well as securing him the accolade of being the only British surfer ever to win a European Pro Junior, a result he achieved last year in the Canaries. His surfing is perhaps the most well rounded of anyone in his age category, as he has recently demonstrated, both making it through a few rounds of the Lacanau QS in 1 foot beach breaks and dropping this teaser of his time spent in double overhead Nias barrels earlier this year:

Flying a little more under the radar than some of the aforementioned, once again hailing from Bude, 15 year old Kit Innes is already being compared to the likes of his North Cornish predecessors (The ash brothers, Jobe, Liam Turner etc) with power, style and an impressive air game. Here is a little edit he put together featuring clips filmed intermittently over the last two years:

19 year old Harry Timson is definitely already up there as one of Britain’s most progressive surfers. Harry spends most of his time travelling outside of the UK, spending few of the winter months in Indo this year, working on his barrel riding and taking advantage of the abundant air sections at Lakey Peak. Like Luke, Harry now plans to take head off on the QS. He recently was the highest placing British grom at the Lacanau Pro Junior as well as making it through to RD4 of the Mens QS event. Take a look at this clip he dropped last month filmed over the course of the winter in Indo:

18 year old Rhys Barfield has also enjoyed a lot of competitive success in the junior ranks, securing the title of Welsh Champion 6 times across 3 different categories. Like many of his contemporaries he is competing this year on the European Pro Junior tour and whilst he hasn’t secured any groundbreaking results, his surfing has looked solid all year. With a fast and attacking style and solid repertoire of on the rail and in the lip turns Rhys’ surfing is spontaneous and electric, well suited to both video parts and judges criteria. Tea and Cake Productions– the media collective that he’s part of are currently in the process of putting some new clips together, so here’s a short of Rhys surfing in California last year: