Catching up with Andrew Cotton; Wisdom Gleaned From An Ongoing Recovery - Wavelength Surf Magazine - since 1981

Home » Catching up with Andrew Cotton; Wisdom Gleaned From An Ongoing Recovery

Catching up with Andrew Cotton; Wisdom Gleaned From An Ongoing Recovery

Seven months ago, Andrew Cotton broke his back after a horrific (and award winning) wipeout at Nazare. We caught up with him to find out how the recovery is going and learn the one bit of simple advice that has helped him get through it.

Seven months ago Andrew Cotton towed into a giant wedge at Nazaré.

He faded deep, bottom turning on his backhand and setting his line going left. Then the lip fell, it’s full weight landing directly on Cotty and catapulting him high into the air with the whitewash. After a few milliseconds airborne, he slammed back down into the flats.

The wipeout crushed one of Cotty’s vertebrae, and later earned him an XXL wipeout of the year award. Earlier this week we caught up with him to find out how the recovery is going, ask how he feels about winning the award and discover how he’s coped mentally and physically with being out of the water for so long.

Hey Cotty, How’s things? Are you back in the sea surfing yet?

Yea, about two weeks ago I had my first surf on a longboard and since then I’ve tried to get in the sea everyday and catch at least five waves. I’m not shortboarding at all yet, just surfing with the kids and trying to spend as much time in the water as possible to get my paddle fitness back up. It’s great doing gym training and that sort of stuff, but it’s all about time in the water really.

Do you have regular check ups on how it’s all healing?

Yea, I’ve been going to Manchester and I’ve been lucky enough to be seeing the guys at the Red Bull high performance clinic, so I’ve been getting regular scans. It’s funny, you learn quite a lot about your body with these sort of things. The most important thing is what the disc next to the crushed vertebrae is up to. The gap between the L2 and the neighbouring vertebrae has stayed really consistent and the disc has stayed in the same place, which is pretty good.

How long till you feel like you’ll be back to surfing 100%?

The specialist said after between six and nine months the bone will be 100%, I’m already 7 months in, so I feel like it will be closer to nine months. In August or September, I should imagine I’ll be 100%.

And is the idea to get on those giant Nazare swells again straight away?

Oh yea, that’s never been questioned really. It was never really on my mind that I wouldn’t do that, I’m looking forward to getting back into some bigger waves. 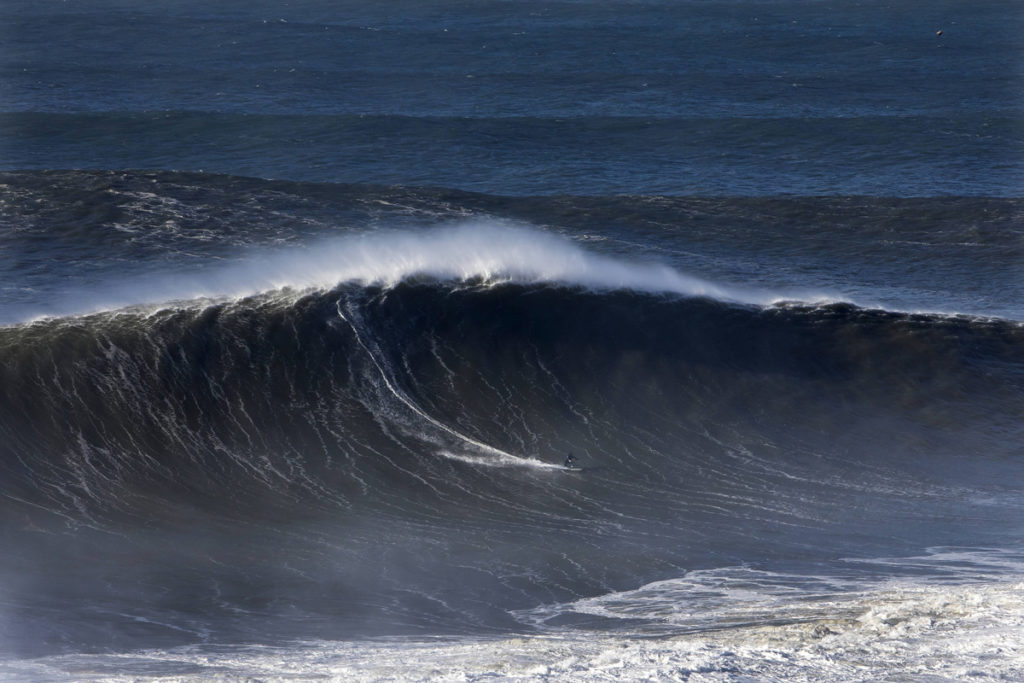 Cotty and the wave that shattered his back. Photo Hugo Silva/Red Bull

How have you been looking after your mental state as well as your physical recovery?

Sometimes the mental thing is harder than the physical thing you know. Of course I’d be lying if I said I hadn’t had moments where I was just totally over it, being injured and missing swells. Especially now with social media and stuff, it’s quite hard constantly looking at something that you’re not going to be able to do for a while.

But I had a really good bit of advice from Garrett Mcnamara’s wife, Nicole, the first night I was in hospital. I had a chat with them on facetime and she was telling me about the power of a positive mind. She told me to refer to my back as my healing back, rather than my broken back.

At that point I’d had an amazing amount of online support, messages from people who’ve had injuries, people sending support and wishes and I must have written my healing back in responses goodness knows how many times. It sort just felt good you know, like my back’s already healing, it’s not broken, it’s my healing back and that really helped. I’ve never for one second thought ‘ah that’s it, I’m not going to surf again,’ it was just a good way of trying to instil that positivity.

There seems to be two distinct ways that people recommend dealing with something like that; one is trying to put a positive spin on everything and feel positive all the time and the other is to allow those negative emotions to be there, observe them and accept them rather than trying to force them out.

I think I accepted that I almost had to disconnect from surfing, so it wasn’t doing my head in, but you know some people go, ‘oh that’s it, all you can do now is lie down for the next six months’ and actually there was so much I could do.

For me it was about focussing on what I could do rather than what I couldn’t. I started cycling on the sessions bike really quickly and ended up getting a water bike which I went on most days. I don’t think there were many days where I just lay in bed, it’s been a pretty busy six months.

How was it getting the WSL wipeout award?

Well getting an XXL award has always been my dream and always been a goal, but obviously you don’t want too many ‘wipeout of the year’ awards on the shelf. It’s a tough one, I’ve always wanted to be up there on stage getting an award, being there with your heroes, but I was a little bit gutted, because it could have been the other way round. I could have made it, but that’s just something I’ve had to accept.

It’s just how it is, that’s surfing, and one thing I learnt really early on in big wave surfing is you have to really enjoy the horrible wipeouts, otherwise you’re not pushing it and you’re not going to take the risks that will get you the biggest wave ever or the ride of the year. With the way surfing is going at the moment, even competitive surfing, you don’t win by staying in your comfort zone, you’ve got to put it on the line, because if you don’t, someone else will, and that’s the sport we’re in. 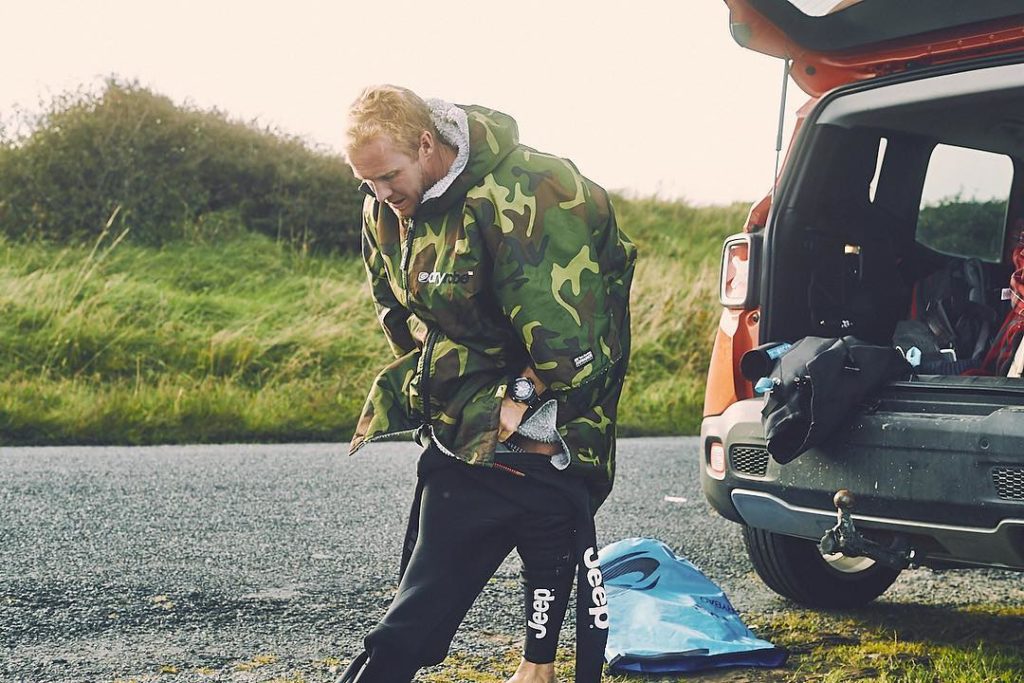 A Dryrobe is a must for those cold mid-winter changes and rests between sessions. Photo: Andre Silva// Dryrobe

And what’s your focus going to be on once your fully recovered?

The XXL awards and the categories in that are my biggest aim, and there are certain places where you know you get those waves, Jaws, Nazaré, possibly Mullaghmore. But also the WSL Big Wave World Tour is a nice focus as well, I’ve had a few wild cards in some of those events at Nazaré, so I always make sure I’ve got good paddle boards and I’m paddle fit and ready.

I think that’s a massive part of it, and you’ve got to be prepared to do all of it, so you don’t say ‘I only paddle, or I only tow’. Obviously I’d like to get the world record too, but I think that will just come naturally.

Thanks Cotty and good luck with the rest of your recovery.