Confessions of a Teahupoo First Timer

Ever wondered how you'd fare at Teahupoo? Here's an account from a very average Joe (staff writer Paul Evans)...

You get a job as an editor of a surf mag, and it’s mostly good news. Good news for the Student Loans Company after all those years, ok news in credit card and overdraft land, epic news for your quiver of boards and wetsuits and general surf gear freebies.

Your close friends though, will suffer. Sure, they’ll do their best to tolerate you, even at your most excruciatingly unbearable. “So then I go to Steph, I’m like, ‘Steph, shall we take the twinnies back out that right point again? Heat’s on!’ Hahahahahaha” etc, etc.

In time, they learn not to ask trigger questions, like, “New Channel Islands, Paul?”

For fear of invoking, “Hahaha yeah, actually… So, Al (held much longer than necessary, like AAAAALLLLLL) says to me, he says, ‘Single to double Paul? What do you think?’ And I’m all like, ‘Well, AL, you’re like the man, man, what do you think? Hahahahahaha’” etc, etc.

It soon becomes apparent that nobody really gives a flying about your pro bros, much less your latest trip.

In fact, they would rather talk about anything but. Maldives to Ments, Cloudbreak to Cali, they’ll generally avoid any mention of the trip you just got back from for fear of invoking a nauseating series of anecdotes.

And yet, there is one question nobody can resist, after the latest all expenses paid ‘work trip’, the doozy of all doozies, the French Polynesia surf media jaunt. 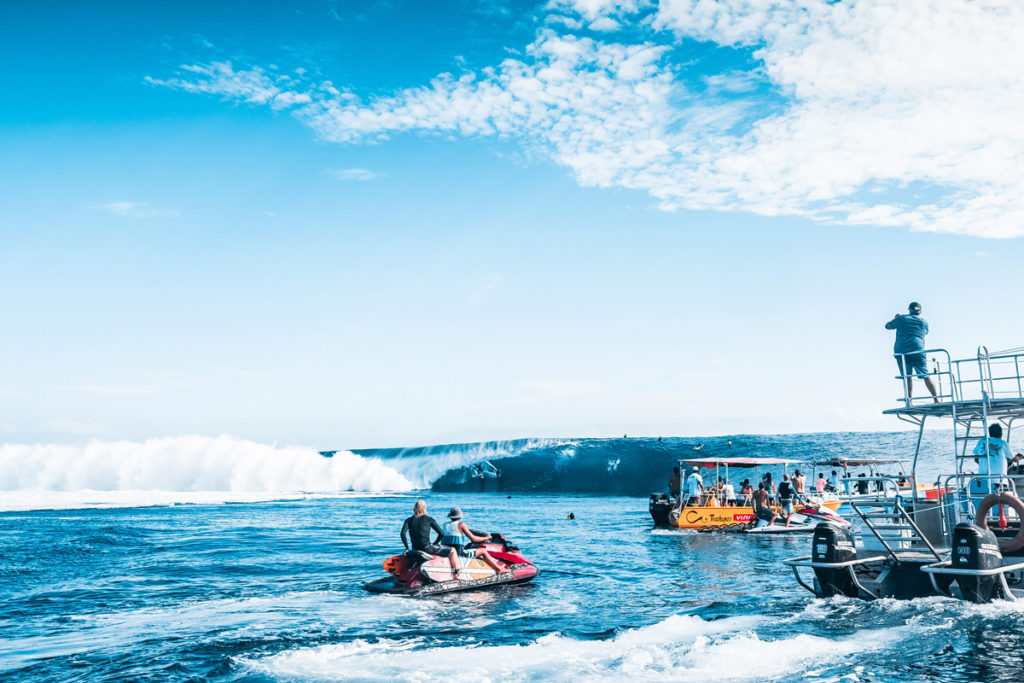 On a good day, the channel at Chopes can host up to a hundred people on all manner of craft, ranging from luxury yachts to sit on top kayaks. Photo Domenic Mosqueira // Red Bull

You’re in the channel at Teahupo’o (which you quickly learn is said Tay-a-who-poh, not ‘Cho-poo’, there’s no ch at all) on the first day of your trip. It’s 6ft with the occasional bigger one. It being just after breakfast, you smoke a spliff of the local, slightly mouldy bush weed whilst swimming in the channel, the first first of a notable day.

You’re watching the likes of Ry Craike, Michel Bourez, Ian Walsh, Manoa Drollet and Russ Winter (who actually snagged the wave of the day, and the trip that day) getting ever meatier shacks. It’s late April, the start of the season in Tahiti, when funky storm winds tend to blow in the night, but soon clean up to reveal the majesty of the most iconic view in surfing.

Gaping, flaring, aquamarine caverns puke spit out into the bobbing channel flotilla with that perfect blend of beauty and violence. The dramatic volcanic peak backdrop, surely the most recognised land-from-lineup view in the surf world, frames the scene as you turn to follow the surfer’s successful tube exit and kick out.

The palm-fringed jungles of the Mentawais, the old church at Mundaka, the church and valley at Waimea all have their own special places, their own weighty visual resonance. But nothing even remotely compares to the feeling those distant jagged peaks behind the spot known as the End of The Road invokes in you. 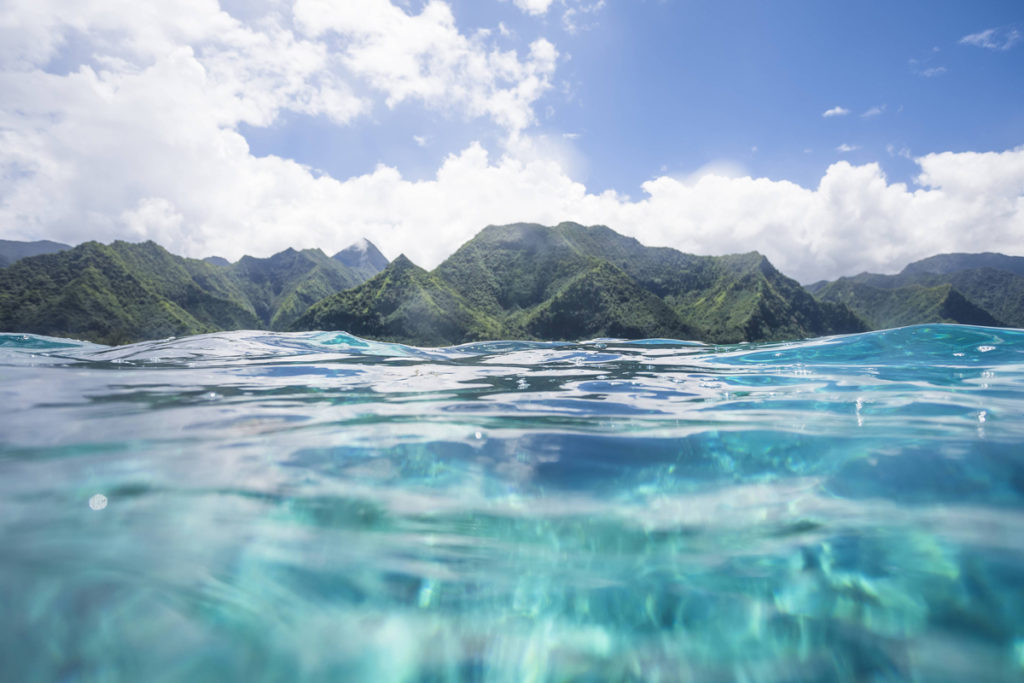 The iconic peaks that rise up from Tahiti Iti create one of the most recognisable backdrops in surfing. Photo Domenic Mosqueira // Red Bull

At first you’re confident, comfortable, stoked. You’re in spectator mode, front row at what is, for all intents and purposes, the most feared and revered wave on the planet. You’re even slightly critical in the detached, armchair sense. ‘It’s not that big, he could’ve been deeper’ etc. After all, you’re comparing it to highlight reel days that made surf films, mag covers.

The local bush kicks in nicely, things continue to clean up, as a few of the pros go back to the boats for snacks the sun burns through in earnest making things look extra pretty, even… user-friendly. You reach for the 6’2” belly channel Bradley.

I should nuance this by a bit of background on your surfing – you’re probably one of the least tubed people in surfing. After formative years spent lip dodging, you then graduated to full-time tube avoiding, developing a special knack for racing forward anytime it starts to throw.

The awkward thing about Teahupoo, aside from the wave itself, is that the lineup is a kind of geographical role reversal compared to your average reef break. As the archetypal pale, shit-at-tube-riding, shitting it unlocal, thousands of miles from home, your instinct is to sit wide off the end.

Not get in anyone’s way, not be in line for bombs, certainly not be assumed to be asserting any kind of dominance. And then maybe, just maybe hope to pick up a couple smaller, innocuous ones. 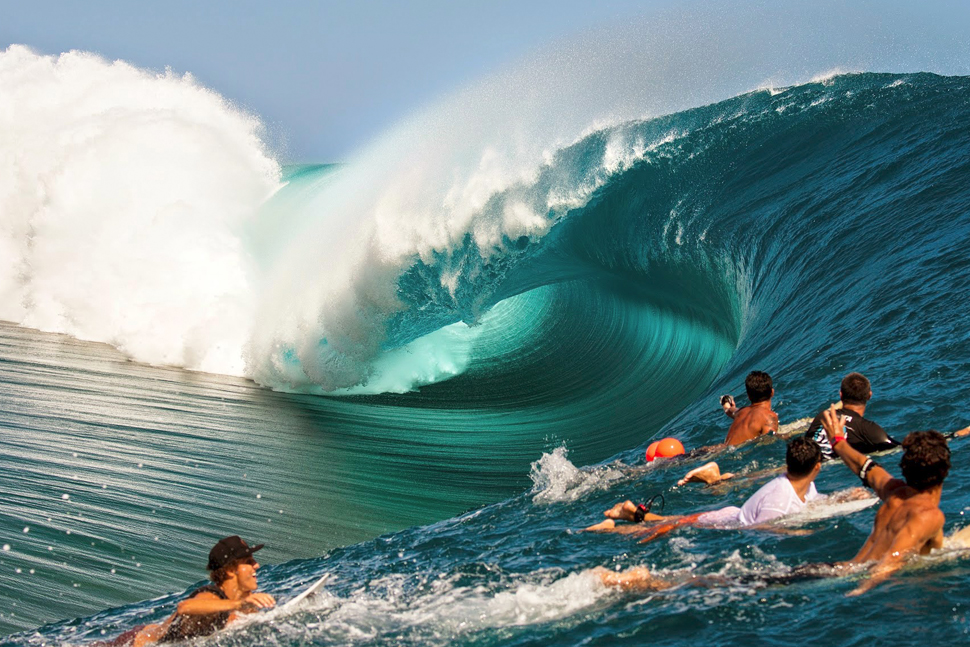 Get a wave, stand up, make the drop, don’t die. Go home with a story for the grandkids.

Teahupoo has other ideas. The waves that come deep up the point, where every instinct you’ve ever developed down the years is telling you not to venture, are the south ones; easier, softer, less hollow.

The proper ones, real Teahupoo, flaring, pics in magazine Teahupoo, are the west bowls. They break wider toward the channel, where you’d naturally prefer to be sitting, not getting in the way.

Hence your existential crisis. After an hour or so paddling back and forth, a few hairy duckdives, one semi terrifying caught inside moment, you surf three waves. Fat, wobbly in-betweeners. But still Teahupo’o inbetweeners, mind. Your boat, full of Austrian and German media folk are hooting your every move, shooting 40 frame sequences that reveal your eyes appear to be closed and your stance looks a bit like you’re expecting to be kicked in the nuts at any moment. You’re also very much not in the tube.

But whatever. Lunch that day, handed to you by Raimana, no less, is scrambled egg in baguette. With the validated, well-earned relish of the successfully returned warrior, you tuck into your first meal as an official Teahupoo survivor.

A year later and you’re back in Tahiti on another magazine trip, and the swell is small. It’s maybe 2-3ft on the sets, sheet glass so clean you can’t actually see the waves very well. Sancho, arrives at the house in the morning and, uninterested himself, offers you a ride on the ski out to look at Teahupoo. ‘Grab your board,’ he advises, ‘It’s perfect for you’.

His girlfriend, seeing you embark the ski on the little wooden dock at the bottom of the yard asks what you’re up to.

“Oh, not much, just off to surf the world’s heaviest wave…” you reply. 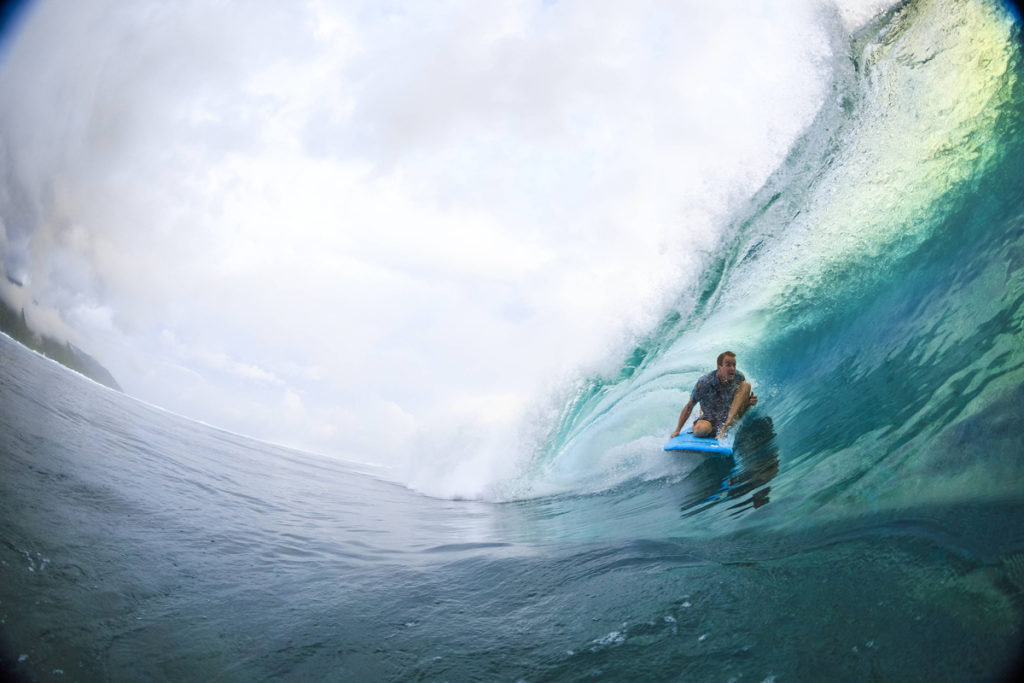 There’s nobody out, the wave is breaking right up the top of the point, in perfect little shoulder-high peelers. You tickle the lip, you even get what Joey Turps might call ‘vision’ cramming your head in the tiny almond eye of a double up (ass in the air, legs akimbo).

Seeing as you are no longer a surf mag editor, seeing as the days of ‘brand trips’ and ‘travel budget’ seem long gone, and probably because of your recent aversion to long haul flights for environmental reasons, you will almost certainly never, ever go back to Tahiti.

But that’s not the tragic part of this story. The real injustice is that nobody ever asks;

“Been barrelled at Chopes?”