Couples who surf together, stay together, or so they say.

It’s a nice idea and one that no doubt rings true for many of you. However, for every story of a dreamy relationship-affirming surf trip we’ve ever heard, there seems to be two more where the whole thing went up in smoke. While these latter tales are often more entertaining, featuring blazing rows in the wilderness and one half of the couple running off with a local surf instructor, we are of course here to help you shoot for the former.

To aid on this quest, we decided to seek insight from one of the world’s most well-travelled surfing power couples, Hydro Flask ambassadors Dane Gudauskas and Anna Ehrgott. 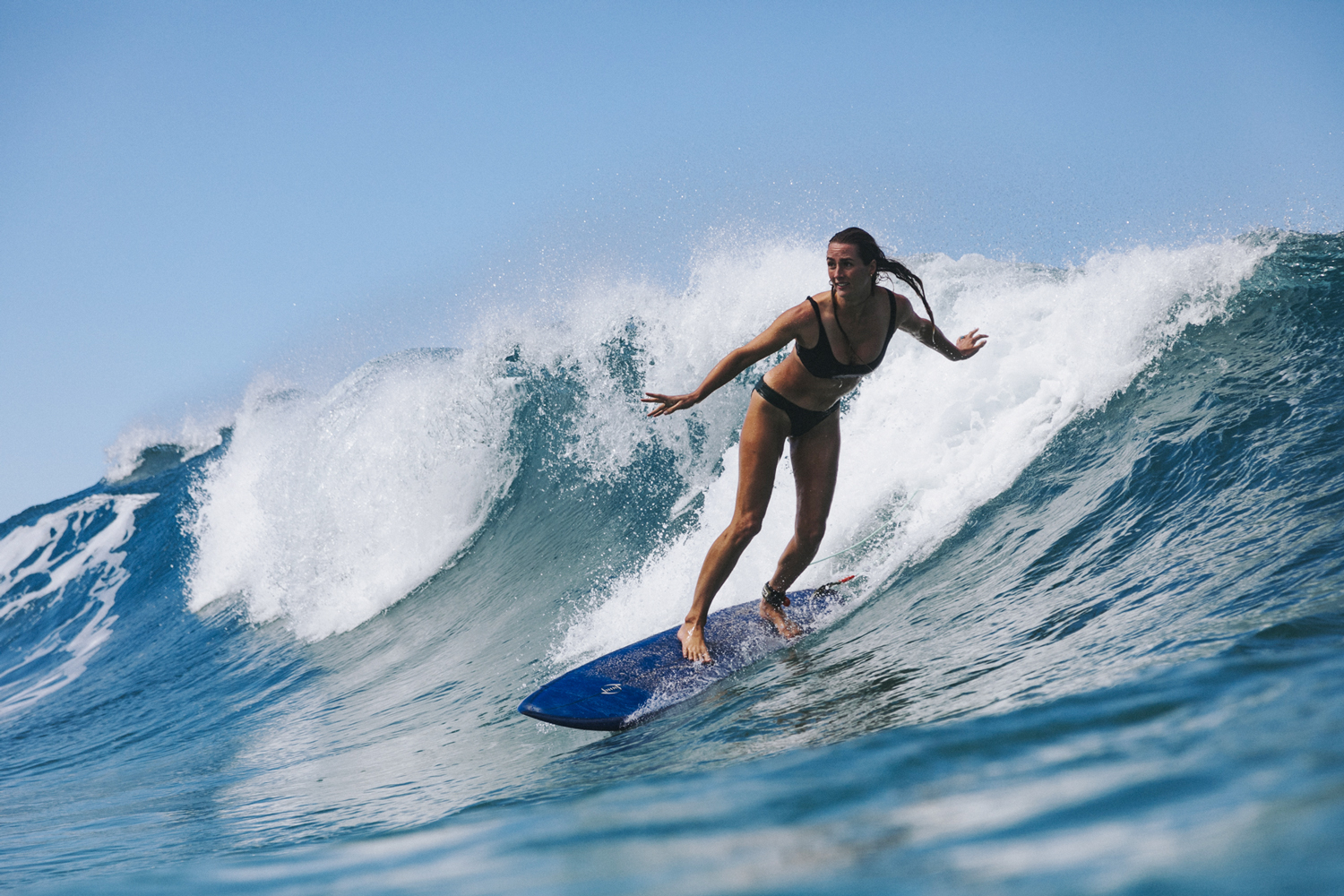 Both have lived the last decade on the road, traversing the globe in search of waves and adventure. Dane is roundly regarded as the most positive pro surfers on earth, spending recent years spreading cheer through his Positive Vibe Warriors collective, with trips around Africa and the Caribbean interspersed with seasons shredding in Hawaii.

Anna is a writer, surfer and outdoor enthusiast, with a stack of passport stamps including Iceland, the Galapagos and Siberia’s Kamchatka Peninsula (which you can read about in Wavelength Vol 259).

Recently, we hit them up to ask what they’ve learnt from travelling together over the last few years and if they’ve got any tips they can pass on for couples looking to hit the road again the minute restrictions lift. 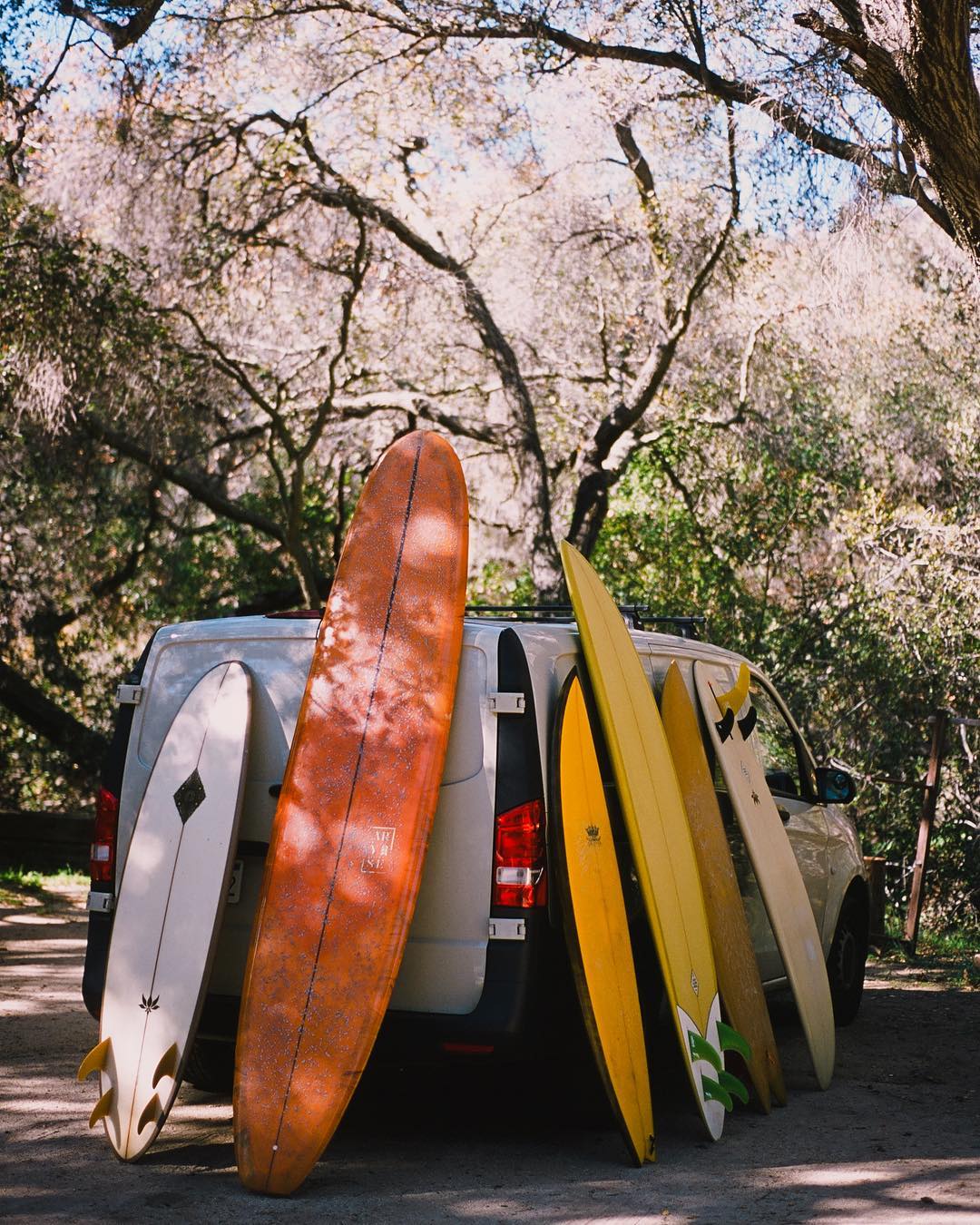 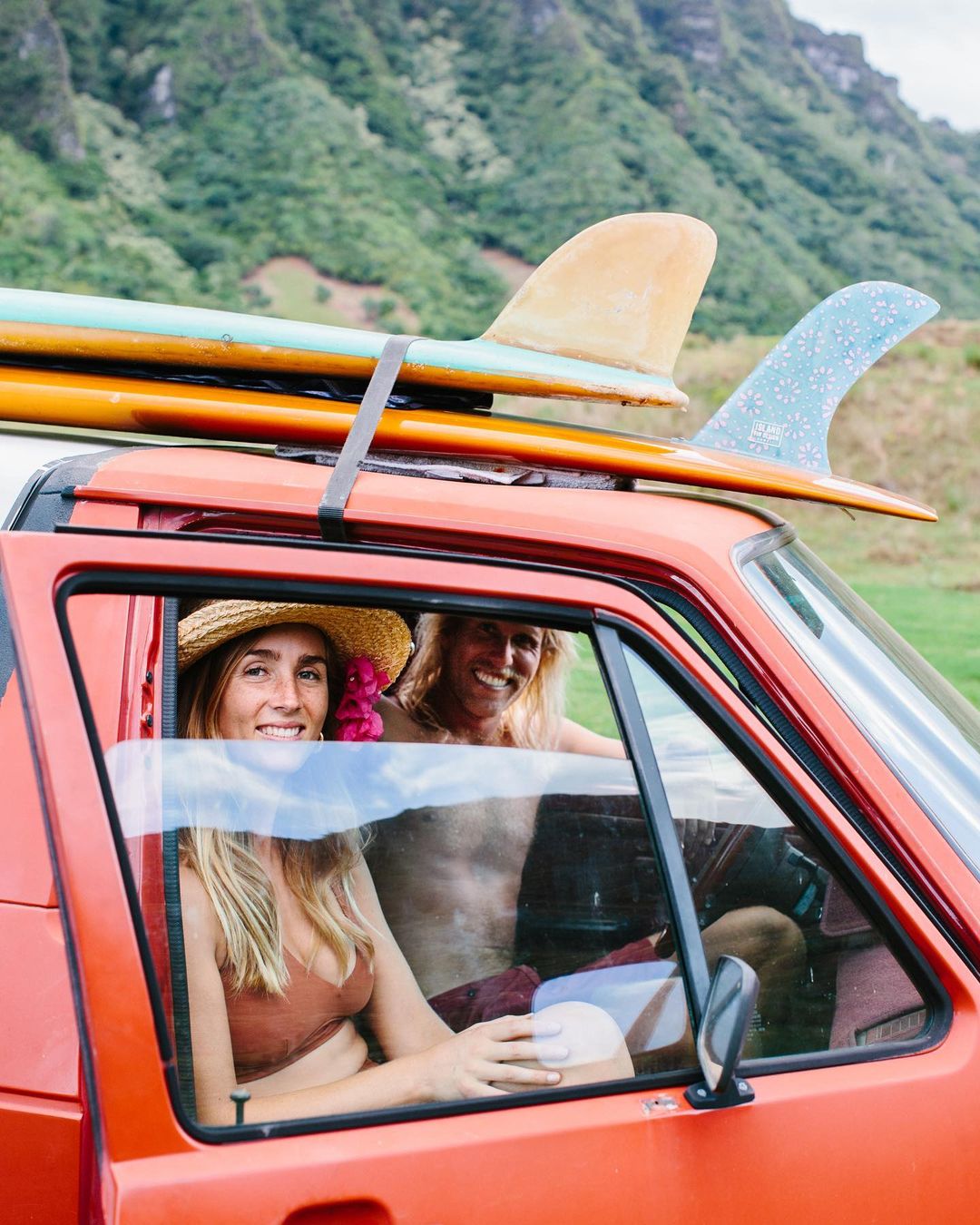 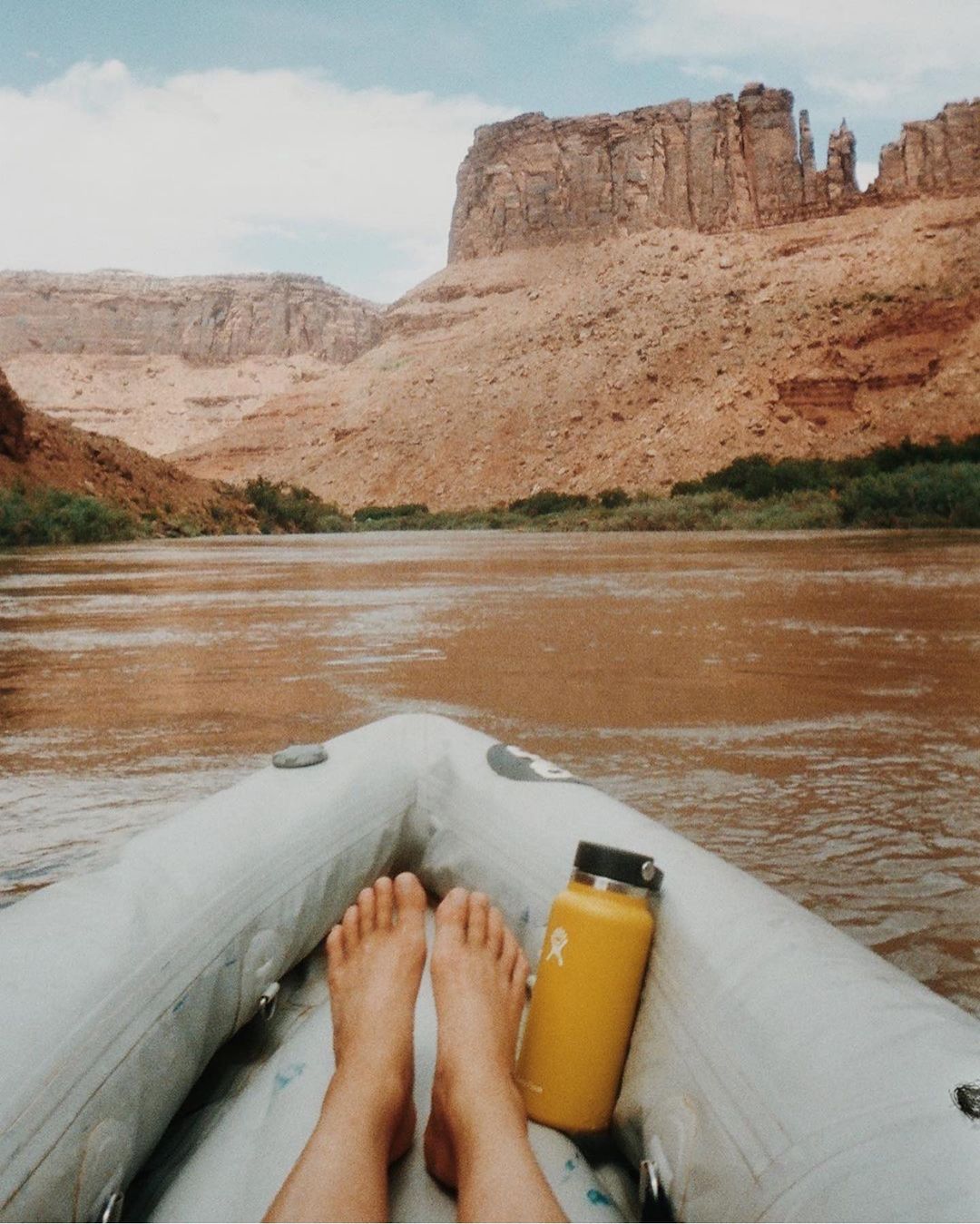 
Dane: We did quite a few trips when we first got together and then suddenly the pandemic hit. But it’s cool because now we’re finding new adventures and the road trip has just become our thing. Anna’s got a little van that’s built out so we’ve just been completely living that van life, with our two dogs, sleeping in this tiny bed, just getting to know each other in a really tight space.

You also get to understand a bit more about each other in circumstances that are outside both of your comfort zones and that really shows you what the other one’s capable of. You might be surprised and be like ‘woah, I’m twice as in love as I thought,’ or you might know right away that it’s not the right thing. It’s a good catalyst for looking at how things work.

Anna: I think you can sugarcoat a relationship for a really long time, but when you’re travelling with somebody you get shown their true colours pretty quickly and you get to know them a lot faster. 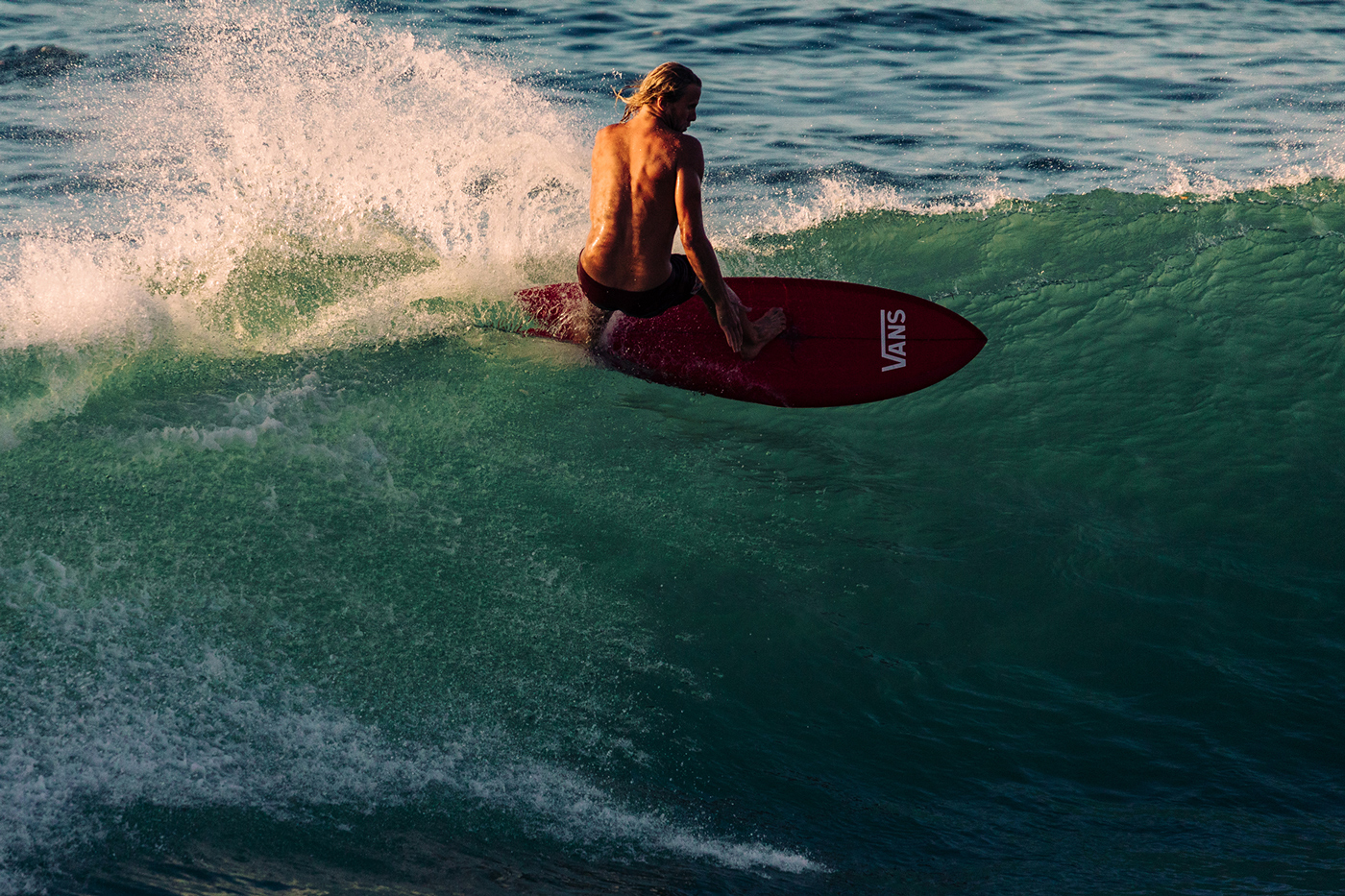 
Anna: I think the need to compromise is the biggest takeaway from travelling with your partner. Just knowing that not everything is going to go your way and there are going to be days when you don’t get to do the things you think are the most fun, and vice versa. But as long as you’re both willing to compromise, know there are going to be good and bad days and try and make the most of things, then it’ll work out.

We just did seven months in Hawaii and that was a good indicator of that. There were a lot of days where Dane surfed and I wouldn’t because he’s more down to surf bigger waves and go out on the really windy days when I’m not. But luckily he also enjoys those small days just as much as I do. He has fishes and gliders, so if I really wanted to surf somewhere that was mellower, Dane was always happy to go out with me and then if he was charging something I was uncomfortable with, I’d watch or shoot. 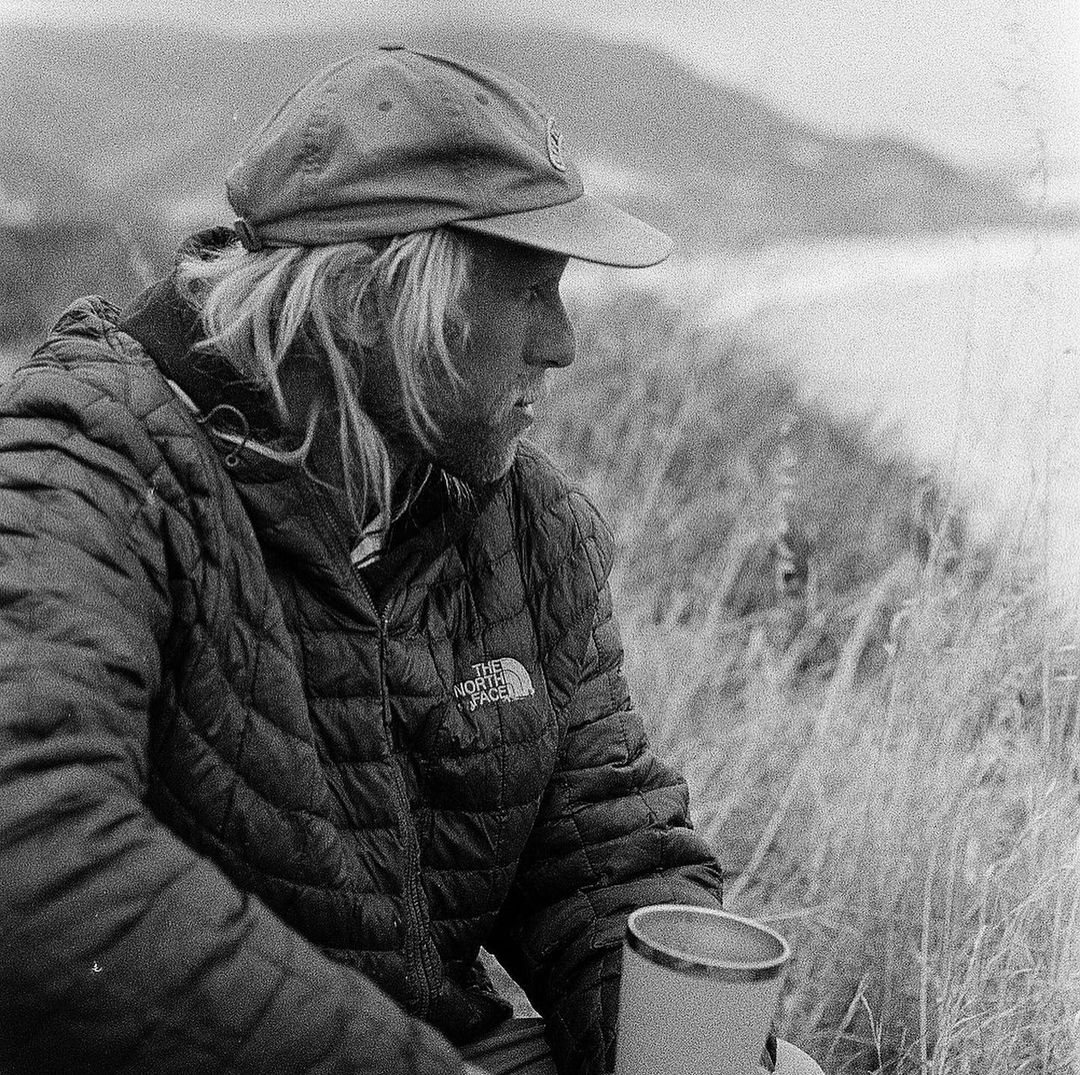 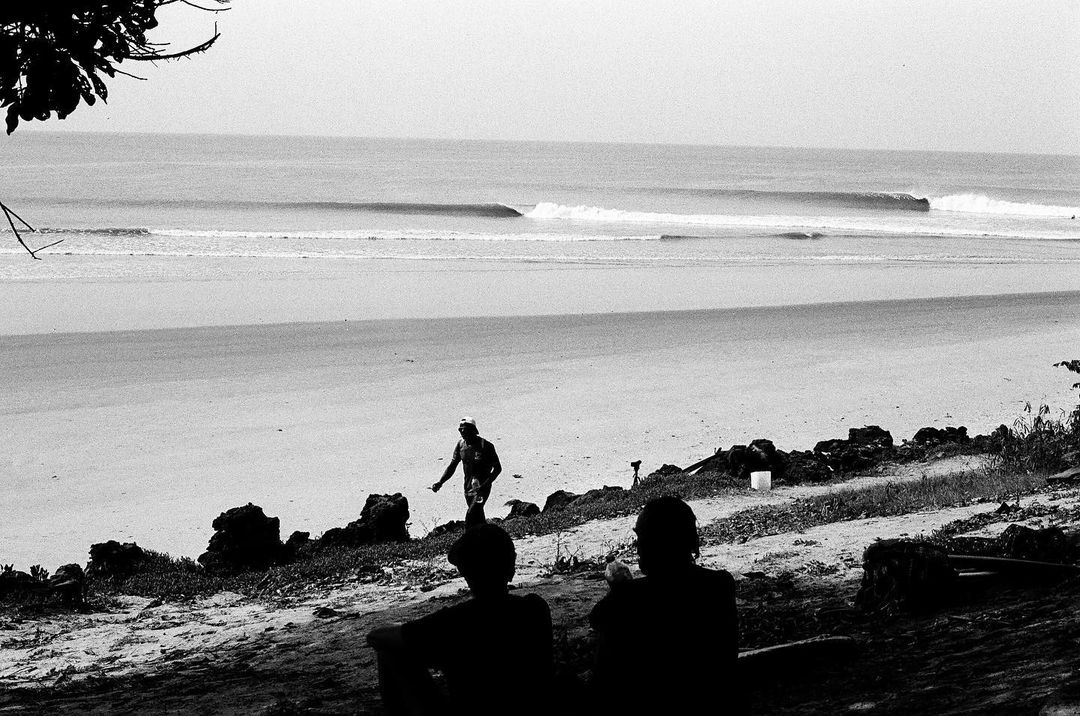 Take pleasure in each other’s triumphs.


Dane: In Hawaii, the wave quality is so diverse, you have everything on the spectrum, you can be longboarding on a one-foot wave in beautiful blue water or it can be 25 foot and closing out, so you start to understand each other’s comfort thresholds. On that trip, Anna experienced some personal growth riding some of the biggest waves she’s ever ridden. I think it’s just about finding that balance so that you feel like you’re achieving something meaningful but also understanding that the best wave might not even be one you’re riding, but one you’re watching your partner ride. I found a lot of joy and satisfaction in that. To me, it was as fulfilling as surfing Pipeline and getting a good one. At the end of the day, waves come and go but you can’t replace the times you get to share those rides with a partner. 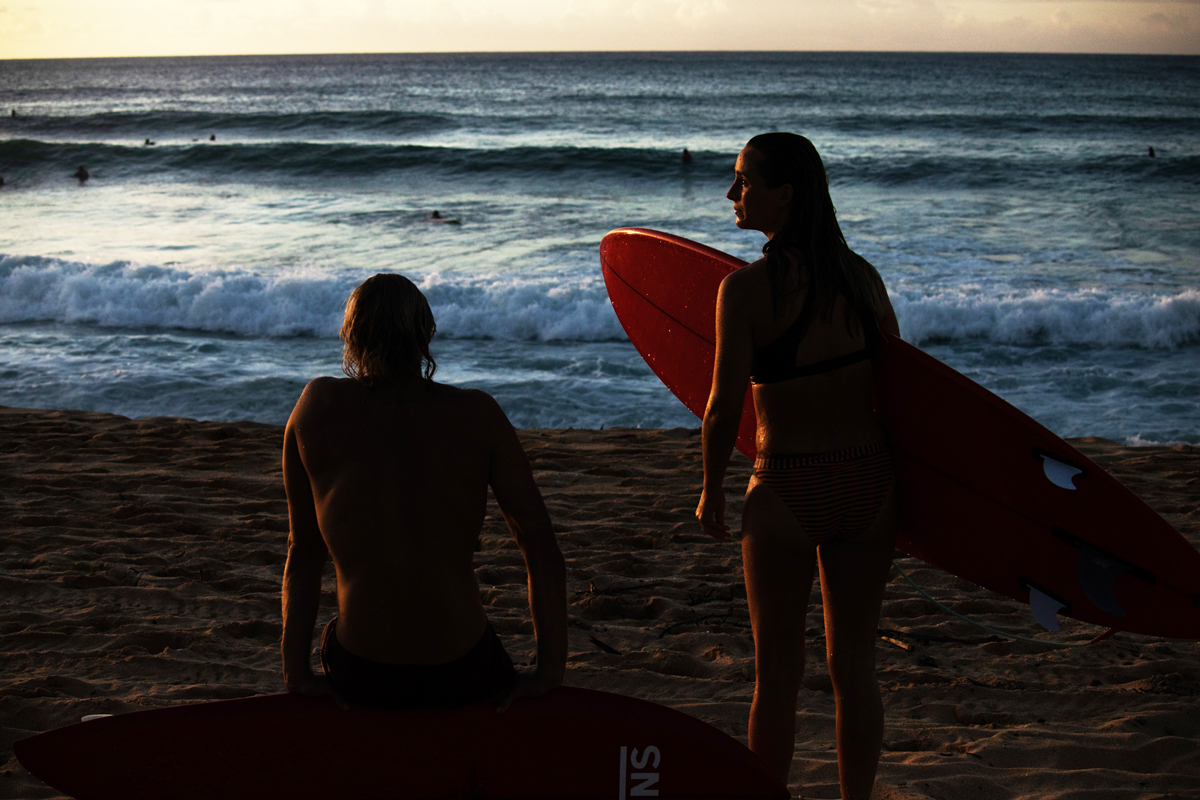 Read the room when it comes to giving tips.


Dane: In terms of giving tips, I might give a few, maybe a light lineup breakdown… Actually there was one time when Anna was out on a big day at Sunset, riding an 8’4 gun, paddling for this bomb and I was like ‘just catch this wave!’ Out the back, I could see a load more coming, so in that moment I just said, ‘you’ve gotta get this thing’ and she paddled like a beast and got it. Hopefully, I don’t give you too many annoying tips though…

Anna: As far as surf critique goes, we have no tolerance for that, like I can’t handle if my partner is saying maybe put your back foot back or something like that. I don’t feel like that goes over well.

I had a friend who said her dream boyfriend is a surf coach and I’ve never understood that! It’s a really big sore spot for a lot of surfers I think. Like even if Dane tells me I got a really good wave and I didn’t think it was a good wave, I don’t like hearing that for some reason.

Dane: Yeh, but I get stoked on everything so I’ll be like ‘that was a sweet one’ and she’s like, ‘really? That was not a sweet one.’ She gives me tips all the time though. Sometimes I’ll come in from a surf and she’ll say ‘did you do an air?’ I’ll say ‘I didn’t do an air’ and she’s like ‘argh!’ 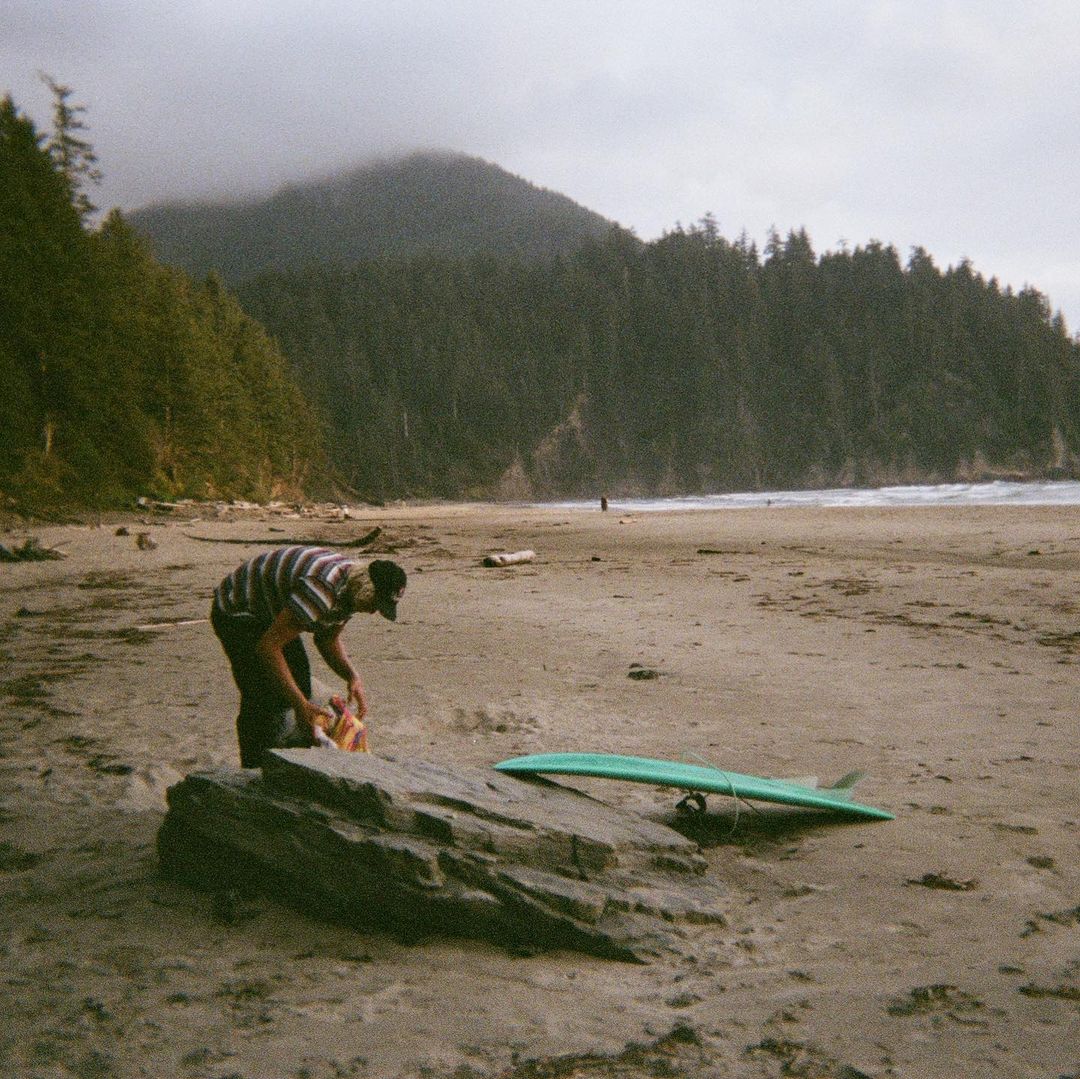 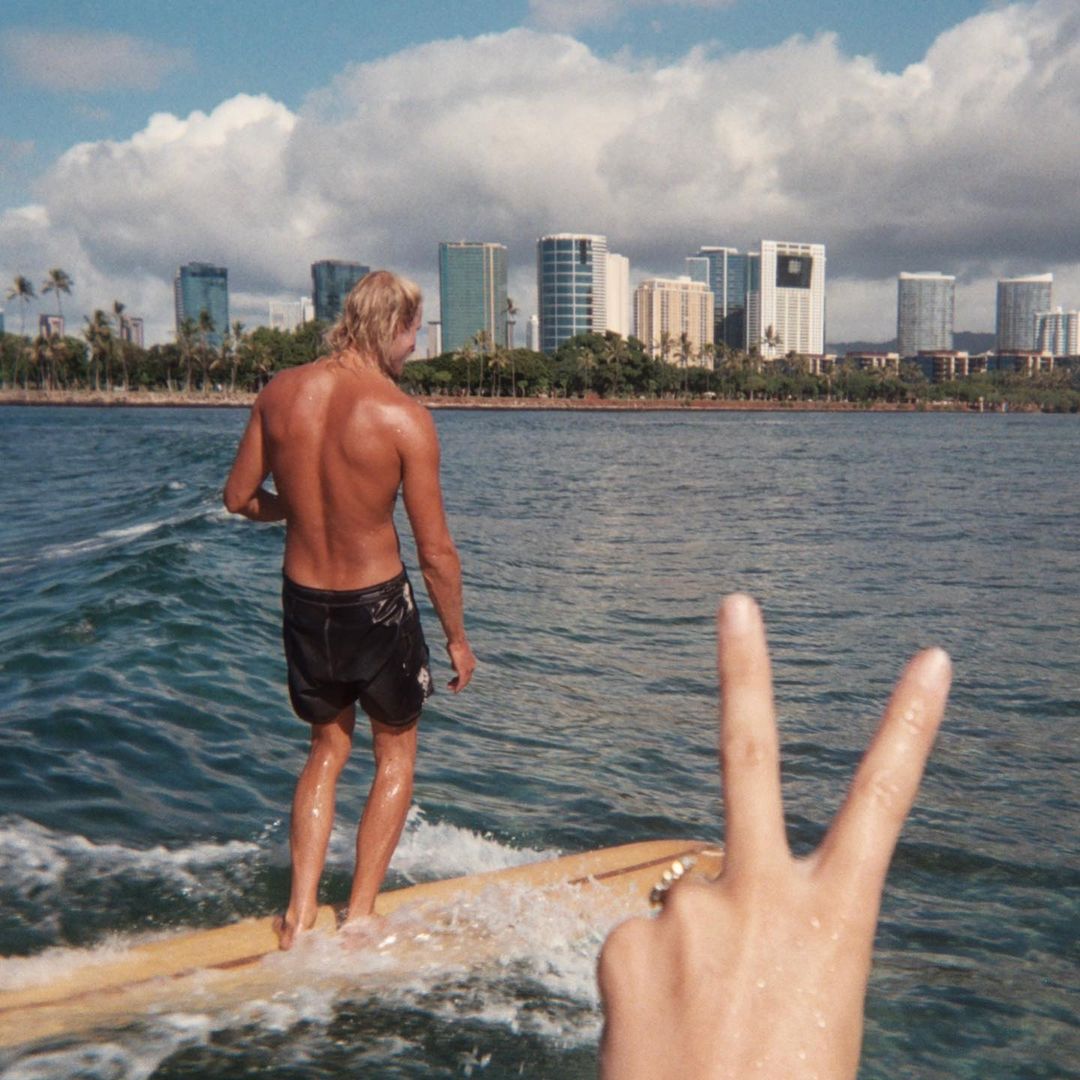 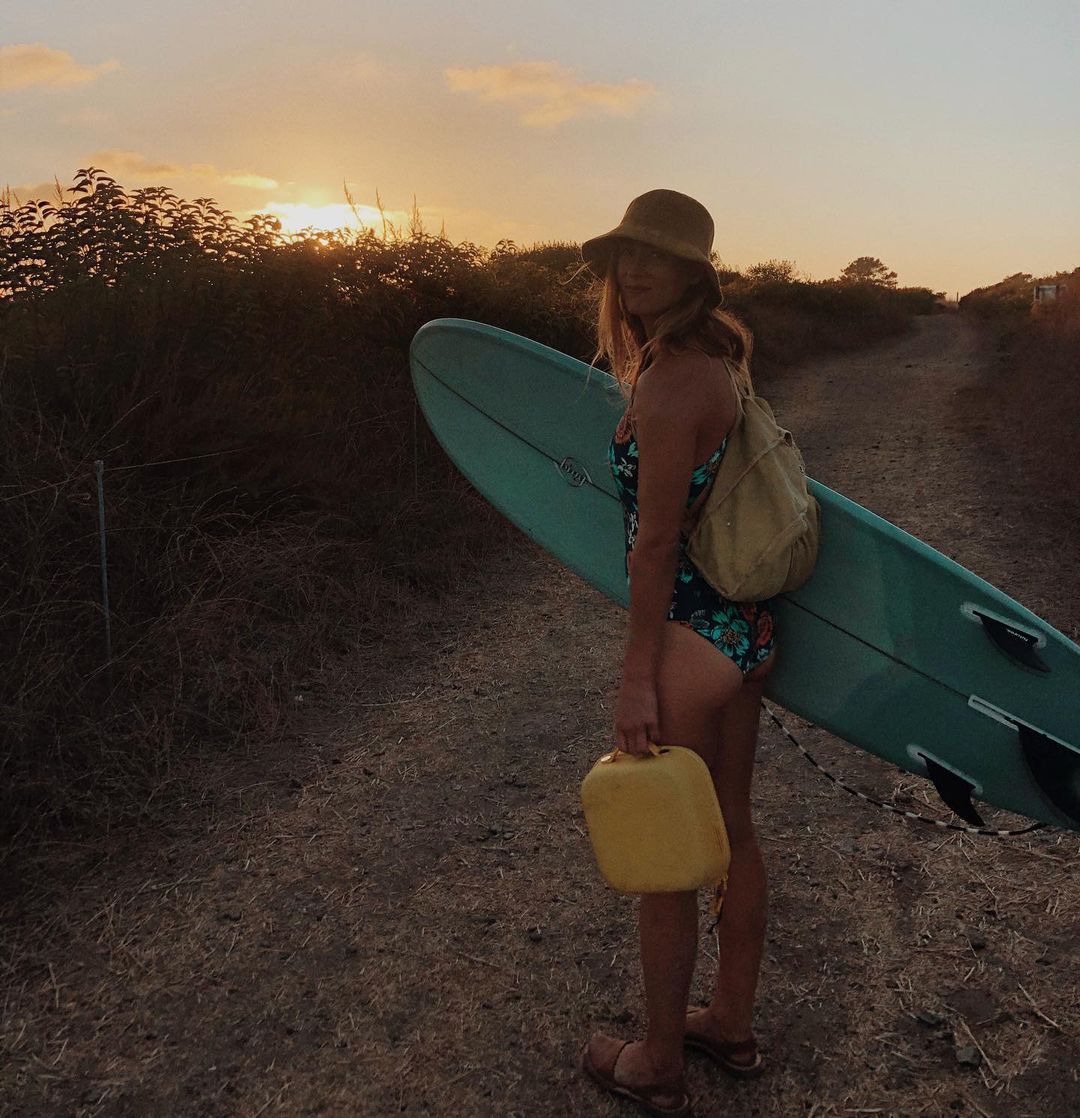 
Anna: We did a Baja trip early in our relationship and it was a pretty fun one in ways that were really unexpected. We didn’t get a lot of good surf but we just ended up finding the funnest adventures, like going to this local Mexican rodeo up in the mountains.

Dane: There was a couple of days on that trip where we looked for surf all day and didn’t find any. So we just packed a couple of cold beers into our Hydro Flask cooler, went to the beach, watched the sunset and that just made the day feel worth it.

Sometimes just sitting watching the ocean with a nice cold beer after a complete misfire of a day is just as fun as actually scoring, especially when you have someone to share those moments with.