Finals day at The Billabong Pipe Pro was chock full of massive moments.

Kelly Slater deliberately fluffed a drop to avoid running over a turtle, then John John clinched his second world title, but had an ever-elusive Pipe victory snatched from his grasp by an in-form J-Flo. However, almost all the big stories have been vastly overshadowed by one particular incident.

You know what I’m talking about. Round five. Kelly Slater, Gabriel Medina. That drop in.

The internet instantly burst into vitriolic flames, and even fans of Medina conceded that it did seem a rather unsportsmanlike way to go about utilising his priority. “Had I known he was going straight and left, I would have tried to go high and around him and maximise the wave.” explained a slightly indignant Kelly Slater in an interview with Stab afterward, “Can’t figure out why he didn’t pull in, as I guessed he would instead.” Our sentiments exactly.

Today, however, has seen a new development in the story after Kelly posted two screen grabs on his IG story, with the first featuring a passage from the WSL rule book that seems to suggest the judges were wrong in their decision, and that actually it was Medina who should have received an interference for the incident: 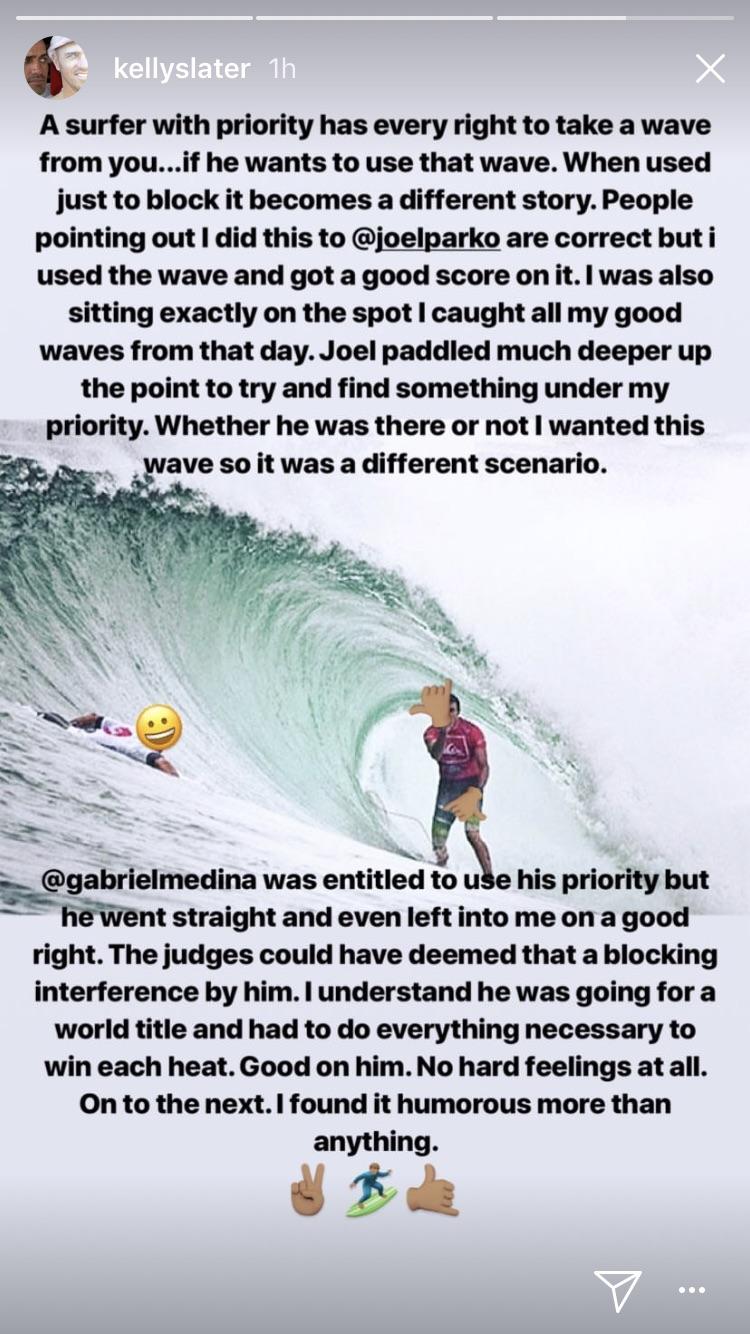 “154.09: Using Priority An interference can be called on a Surfer with Priority if, in the opinion of the Priority or Head Judge, the Surfer utilises their priority in an unsportsmanlike manner to intentionally block another surfer with lower or no Priority outside of the Primary Take-off Zone.”

While almost everyone would deem Medina’s drop in and turn towards unsportsmanlike, there does seem to be some inherent ambiguity in the term. The very notion of sportsmanship varies from nation to nation and culture to culture (us Brits like to believe we’re leading the charge) and so it seems an odd way for the WSL to word it. Perhaps the rule should be a little more cut and dry, stating that if a surfer takes off and makes no attempt to ride the wave (ie not following the direction of the peel) that should be deemed an unsportsmanlike block and be disallowed.

We’re guessing that the WSL judges were aware of this rule, and probably deliberated over the incident with it in mind, deeming Medina’s actions not to be unsportsmanlike, but since the masses so clearly disagreed, maybe we could have done with one of those little phone calls to an always slightly salty Richie Porter for clarification.

The debate rages on.