Home » How To Bodysurf

How To Bodysurf Is spooning Huey the highest form of all the arts of shred?

Mid-century minimalism might be the interior decor of choice of the Audi-driving moneyed male bachelor sociopath with detestable spiritual qualities. But minimalism as a mantra, as an overall approach to tasks leisure or otherwise, is almost always admirable.

Hence one of the great hooks of surfing, compared with say, its now near extinct former rival, windsurfing.

Whereas they needed a zillion bits of kit and a Formula 1 pit crew style toolbox, all we needed was board, wetsuit, towel.

And the very best part? You really don’t need a towel, mightn’t require the wetsuit and don’t really need a board.

Welcome to the beautifully simple, clutter-free commune with nature known as bodysurfing.

Whether you call it bodysurf, bodywhomp (my personal fave) or bodybash (Australia mainly), whether you bought the full Vissla x DaFin ‘capsule’ (whatever that means), whether you brandish a wooden hand plane or not, you can’t help but love the full body embrace with the wave face.

But how come some people can do it and others can’t?

Who gets priority in the lineup between board surfers and the flotation device-free?

Is it ok to bike to the dap with your DaFins in the front basket with a smug ‘I live here’ look on your dial? (Guilty!)

Is Torpedo People the best surf film ever made? 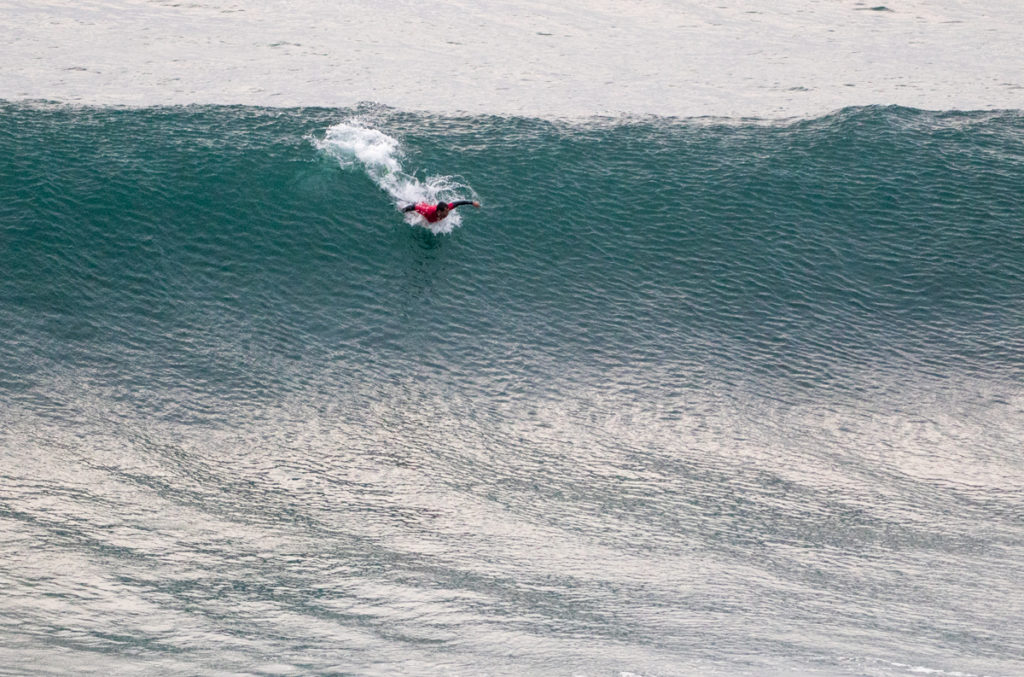 Being a traditionally shite swimmer, personally I struggled for a long time with my take offs. But the problem, apparently, was that I was swimming too much, as opposed to not enough.

I got a tip from a local French bodywhomper who told me that he reckoned swimming with your arms can slow you down and make you grip, as opposed to sliding into the wave.

While there are loads of techniques and variations, the consensus for the novice/intermediate whomper, seems to be that the ideal is to roll on one side (right if going right, vice versa) with that arm extended, swim a few strokes with the other, whilst kicking hard.

That one tip literally changed my life. 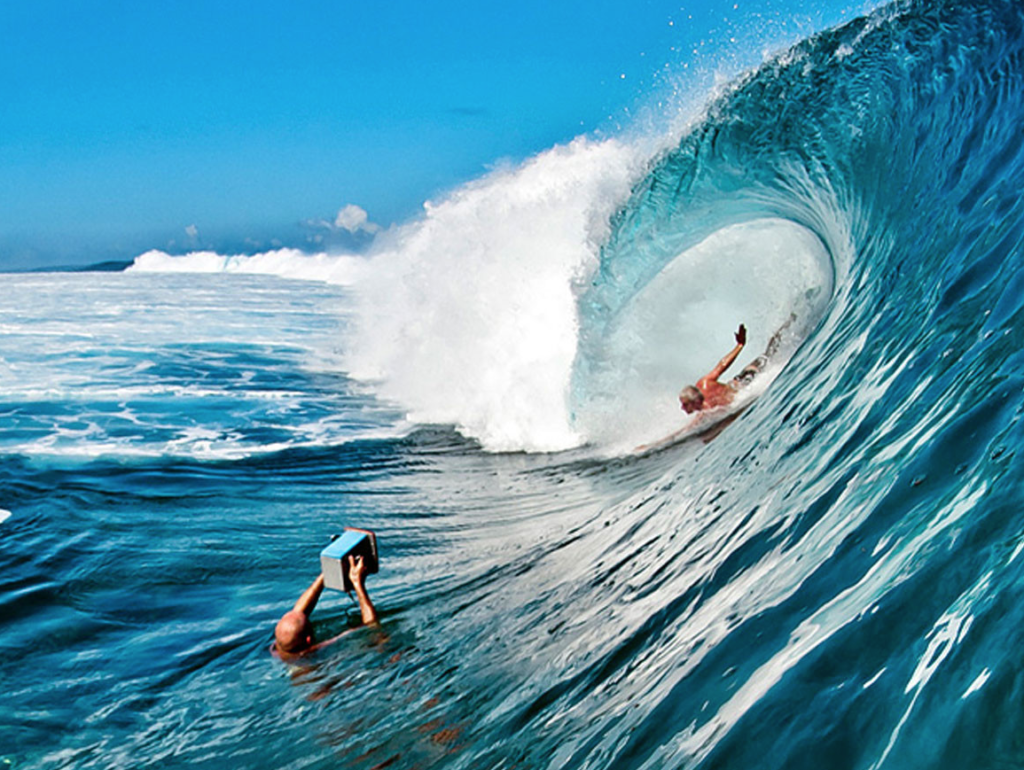 Cunningham, Chopes, from Plight of the Torpedo People, surely the greatest surfing without boards movie ever made. Photo: Burkard

Tube time depends on the waves you’re whomping, obviously. But the one truth of bodysurfing, the one way it trumps standing up is the frequency and volume of pits to be had. Back in the 2000’s I saw a quiver piece in an American magazine with one of the Malloys and noticed something he called a ‘handgun’; an 11″ plastic (!) handplane with a wee leash. I asked a mate who lived in Cali to grab me one, and when he came over, I took mine out at Bourdaines on a 3ft high tide day. I’d surfed for an hour or so and had fun doing my customary wiggles, but then as things got really shorey, I strapped on the handgun and slid into swim fins.

In the ensuing 20 mins, I reckon I got barrelled 25 times. I discovered you could push down on the plane and actually lift yourself out of the water, adjust your tube line and cling on to the dry sand explosion.

It was a stormy-skied, autumn evening, clouds burning orange and purple drama before the setting sun. Those colours reflecting raucously on the concave face of the wave – only inches from my own – made for a mind-alteringly profound experience.

As the years roll on, obviously the number and quality of tubes gets augmented (it was probably 4 or 5), but little matter. I regard that sesh as one with Road To Damascus significance, recall it with a special misty eyed fondness usually reserved for a very select half dozen surfing experiences. 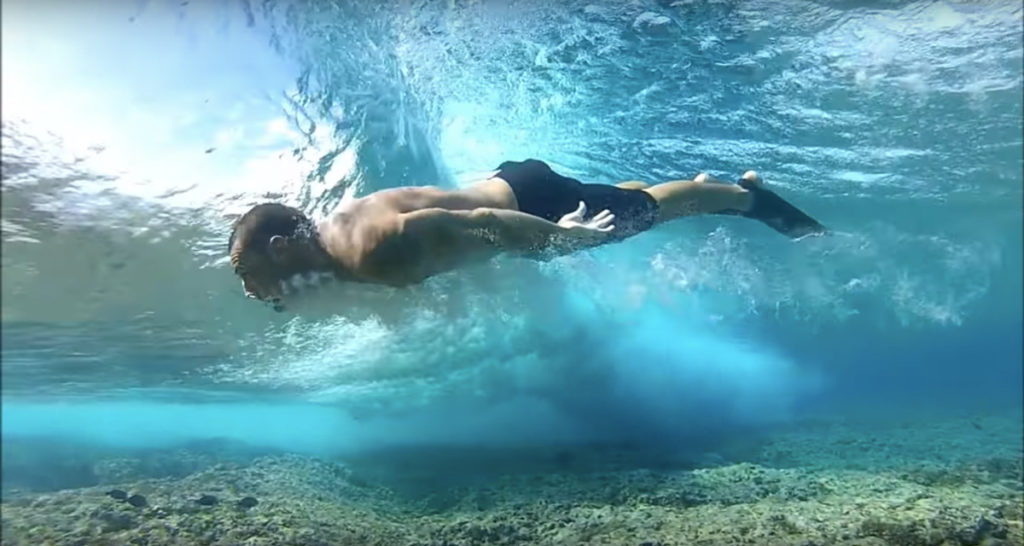 Much trickier to take a roll of whitewater than a pitching, steep face. Weirdly, the more powerful the wall of whitewater, the harder it can be to pick up. But being able to pick up rolls of soup can be both a fun, and practical skill (in a heavy water, broken leash situation for example).

Having consulted elders and wisers, the go seemed to be to keep your head down underwater, to try and get as flat on the surface as possible, whilst kicking. Even better yet is to go underwater first, and kind of ping to the surface and shoreward just as the wave hits from behind. If and when you get the hang of this planing on your chest vibe, you’ll actually notice as you lift your face out of the water (eg to breathe), you feel yourself slowing, then when re-submerging it, pick up speed again. A mate even told me about rounding your shoulders forward and down, lifting your battybum a wee bit and trying to create some concave.

Unlike surfing itself and its wretched thousand-hours-just-to-be-shit curse, you’ll find your whomp prowess rockets almost exponentially after a half dozen cumulative hours of practice.

The sheer number of opportunity that presents itself compared with surfing means that you can rack up a monster wave count and really start to get confident/annoying.

Fact: Nobody who can do the underwater start dolphin take off bodysurf has ever been able to not do it in front of friend/love rival/total stranger given half an opportunity. Your spin onto back and then on to front, repeat, etc is probably one of the easier rotations you’ll ever do in the surf, and if you can even get close to being able to adjust your line up the wave into the lip for fruity prone reo/top turns, well that really is some next level shit right there.

Perhaps the very best part of whomping to the attention/reward seeking enthusiast is that it’s generally done in the shorey, and thus right in front of any gathered audience.