So, we’re encouraging you to indulge it enthusiastically with our ongoing series of discovery stories from some of the world’s most prolific surf explorers, running all this winter here on the Wavelengthmag.com

Loosely speaking, the history of surf discovery exists in two distinct chapters; before and after the internet. Finding new spots in the first relied on nouse, luck and the ability to spend long periods of time pottering about between tropical islands and traversing coastlines off the beaten track.

Success in the second demanded a whole new skill set, with intense pre-trip planning and the use of digital tools to decipher potential spots and the conditions required from behind a computer screen becoming equally as important as time spent in foreign lands.

While Callahan’s career finds its roots back in the 80s, on the shores of California and Hawaii, it was with the onset of the digital age in the late 90’s that he really established himself as one of the great contemporary surf travellers.

When asked for his most exciting discovery story, he regaled us with tales from the last two decades alongside his SurfEXPLORE collective, featuring never-before ridden breaks everywhere from Haiti to Algeria, South Korea to Sierra Leone. However, it was the account of one of his earliest forays to the Philippines in ‘92, and a classic ‘08 mission to Mauritania that really stood out.

Here, John picks up the stories: 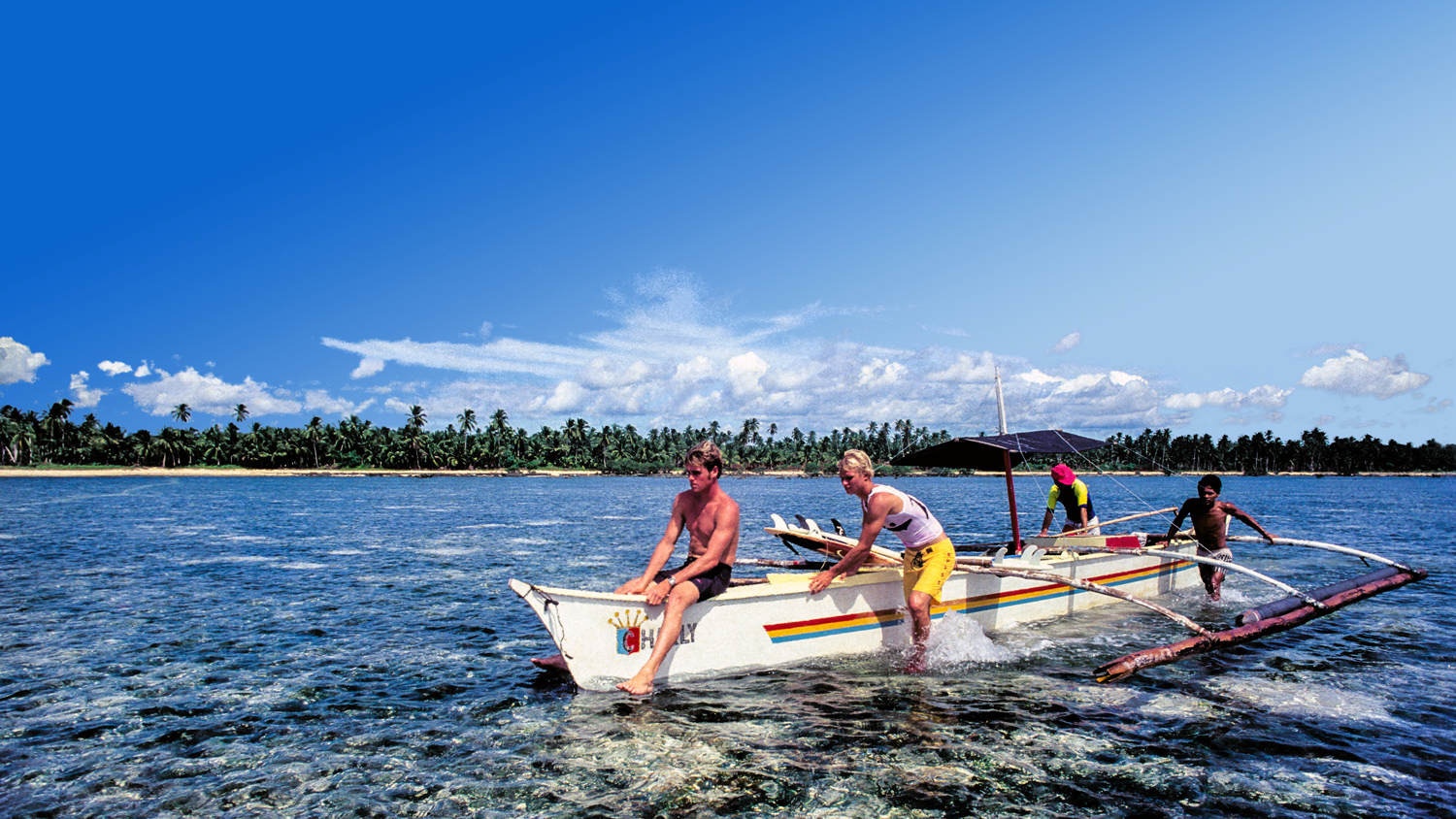 I made a trip to The Philippines with Taylor Knox and Evan Slater in the typhoon season of 1992, early September. We didn’t know very much about where we were going or what we might find there, but we knew the east coast of The Philippines got swell from Western Pacific typhoons so we decided to go to an island called Siargao to have a look.

We got a cottage on the beach and met the two surfers already there, Kevin and Dave, who had arrived from Sydney the day before. They said they surfed a good lefthander in the morning and invited us to share a boat with them the next day. We got up at sunrise and motored out to the reef, trading six-foot offshore lefthanders until we were too tired and hungry to surf.

We surfed this lefthander for the next few days, until Evan came back to the boat where I was shooting and declared “We should pull the anchor and look around for a right – we are getting bored going left” I said ok, that sounds like a good idea – I had several days of images from the left in the can, so let’s look around. Taylor came in a few minutes later and we discussed a plan with Jo-el the boatman. He pulled the anchor and fired up the ear-shattering unmuffled banca motor and we were off into the unknown.

After a while, we saw spray coming off what looked like a clean peak with a channel next to the right. Trying to judge waves from the back is nearly impossible, so we nominated Taylor to paddle over and check it out, as his board was on the top of the stack in the front of the boat. Taylor wasn’t that enthusiastic, moving out from the shade cover into the hot sun to check out this wave that was probably nothing, but someone had to go over and look at it.

Taylor threw his board in the water and jumped in. We gathered under the shade cover and waited, as he paddled towards the peak. We could see him stopping and adjusting his position, looking around for exposed reefs or anything dangerous. He put his head down and paddled hard. Evan said, “Here he goes”. We were all watching as Taylor disappeared and the wave began to break, we could see his track from behind the wave as he moved towards the channel, very fast. Suddenly he appeared on the shoulder, gliding on flat water and looking at us with his arms over his head and shouting “Aaaawwooooooooooo!” 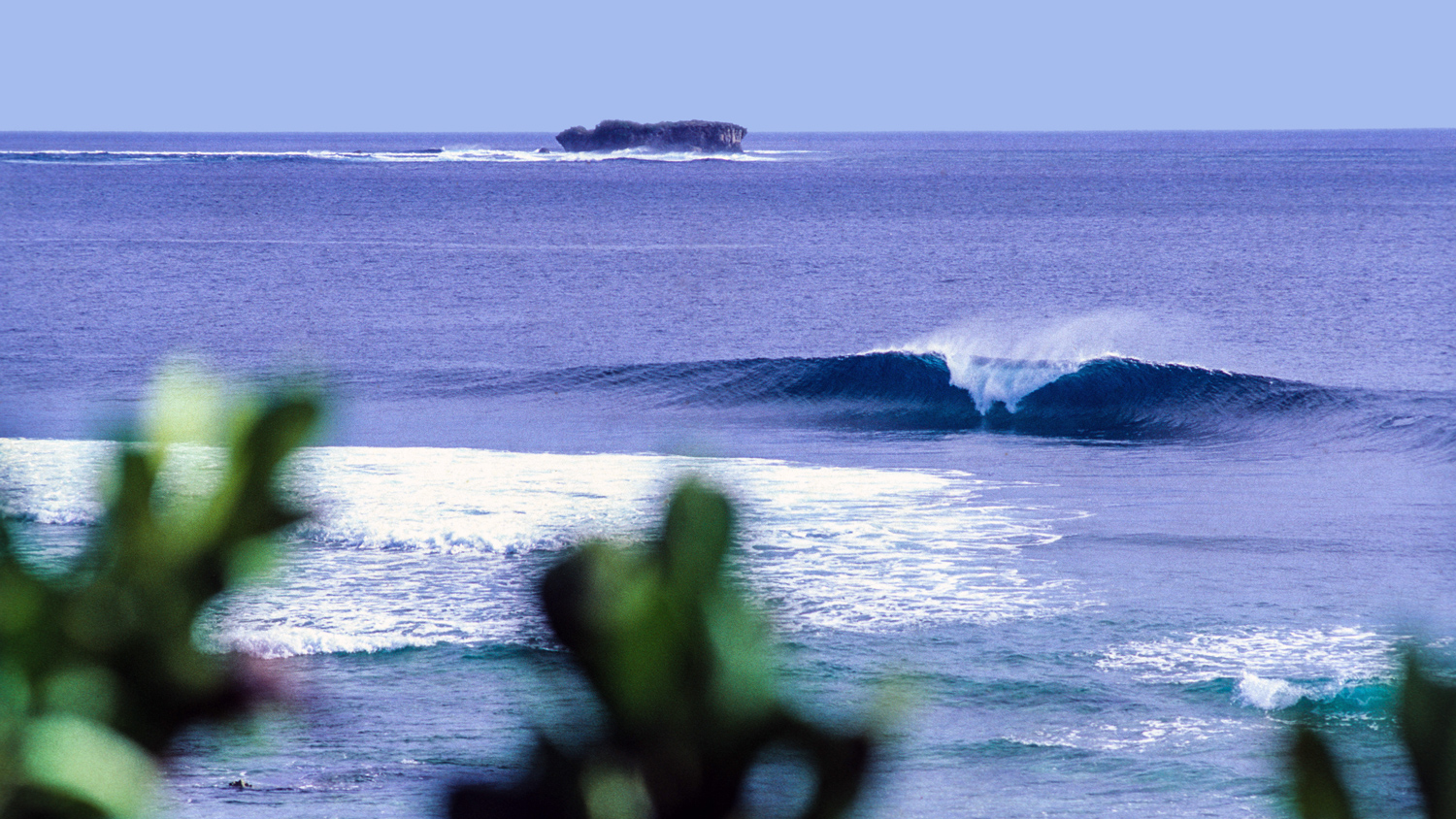 There was a mad scramble for wax, leg ropes and rash shirts as everyone tried to jump in at once. Jo-el looked surprised and asked me “What’s going on?” I said, “Can you keep the boat here for a while? We are going surfing”. I later named the wave “Cloud 9” after the local no-melt chocolate bars, as walking into town after lunch for a Cloud 9 bar and a warm Coke was one of the highlights of our day.

As it turned out, the wave was a known wave, being in front of a beachfront hut constructed by Maui haole drug dealer and international fugitive Mike Boyum several years earlier. We knew nothing of Mike Boyum or “Max Walker”, his nom de guerre during his time in Siargao, where he died from self-induced starvation in April of 1989. 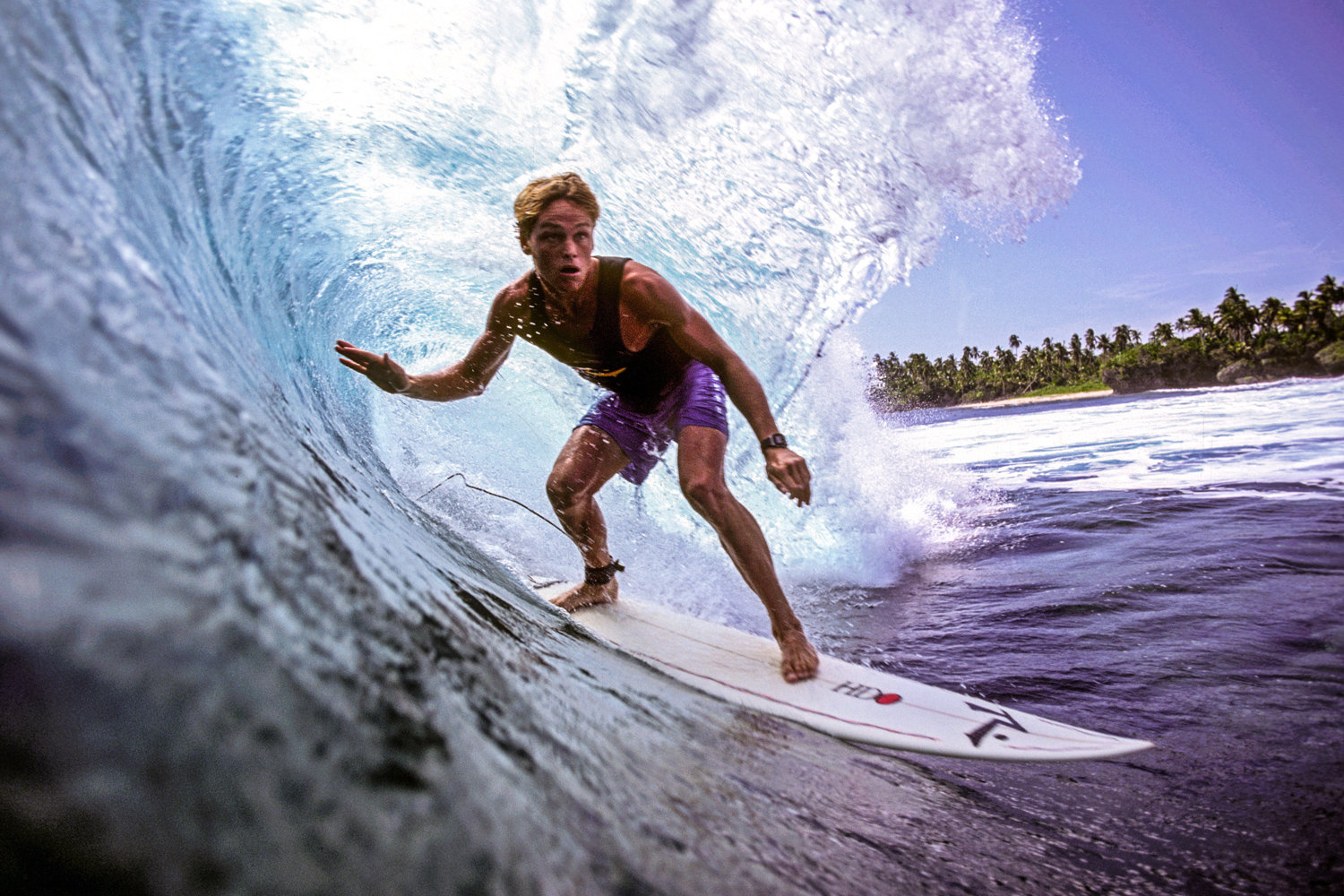 His hut was still on the beach three years later, approximately where the base of the famous pier is now. There was nothing else on the beach at the time, it was completely empty. We went into the beach only once,  just before sunset to retrieve the front half of Taylor’s broken board.

Taylor ran down the beach and while we were waiting, Evan asked Jo-el who the hut belonged to. He said “Max Walker – American guy”. Evan said with surprise “American guy – out here? What happened to him?” Jo-el looked at us and said, “He did not want to live any more, so he died”. That gave both of us the chills, but at the time; we did not know “Max Walker” was Mike Boyum. It just seemed like a lonely and remote place for someone to die. When Taylor came back, we loaded Taylor’s front half into the boat, pushed the boat off the beach and left.” 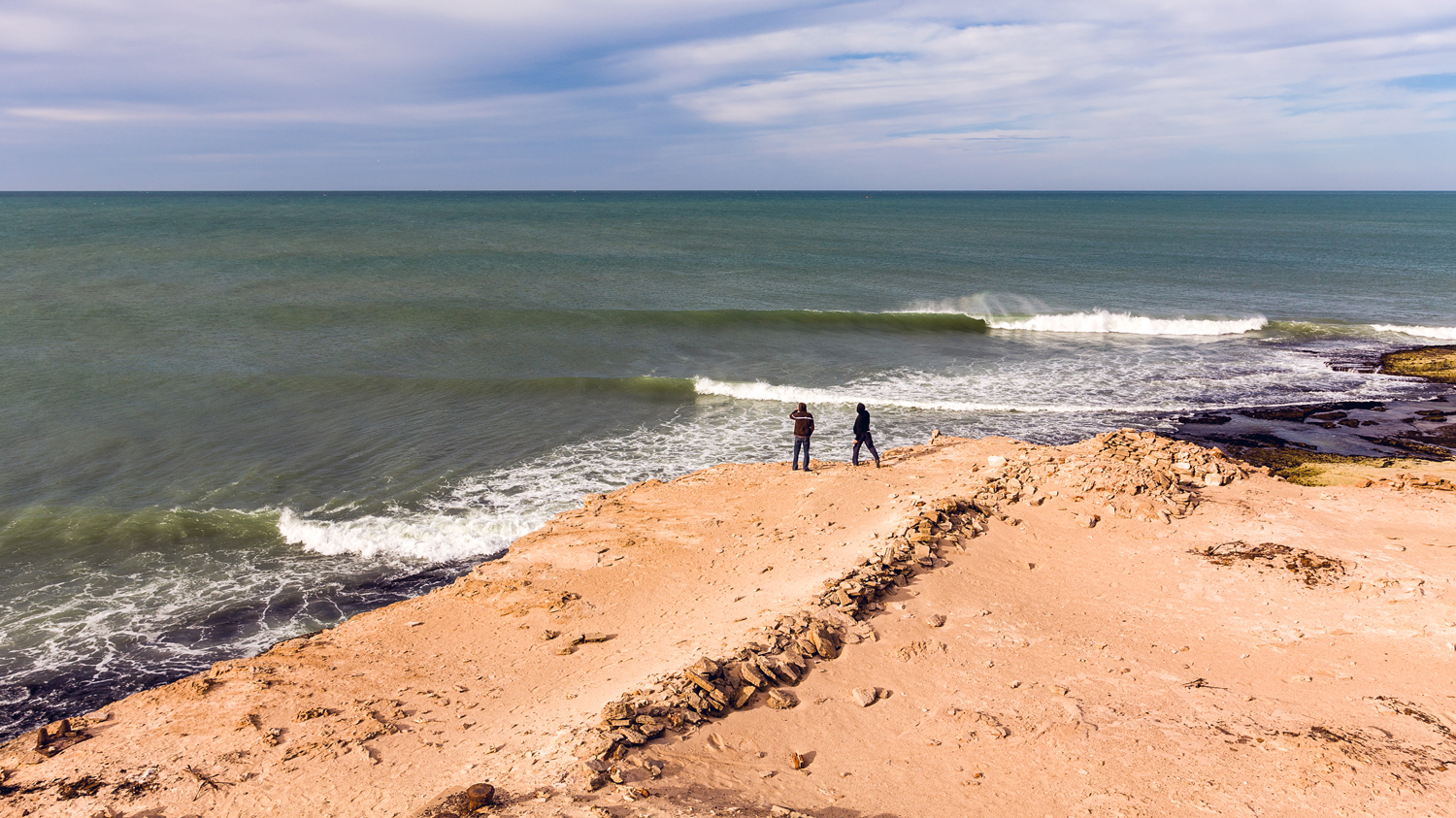 Mauritania is a sprawling desert country in North Africa, barely populated outside the main cities and with a long coastline on the Atlantic Ocean. The same major North Atlantic winter swells that affect Morocco to the north filter down to Mauritania, making for long right points and beachbreaks in a predominately offshore wind.

Our main area of interest was the Nouadhibou Peninsula in the far north, a de facto “No Man’s Land” as it is not formally part of any country. The peninsula has been occupied by the Mauritanian Army since 1990. In colonial times, the area used to be divided between the Spanish Sahara and French West Africa, with a fence running down the centre of the peninsula, which has since been removed.

When Spain decided to abandon the Spanish Sahara in 1975, Morocco moved in with troops and weapons. Mauritania responded with their own troops and weapons and the two sides fought to a stalemate by 1990. Mauritania has been in control of the entire peninsula since, with an informal international border with Morocco about 20 kilometres north of the city of Nouadhibou.

This situation presented considerable obstacles for us as we would have to engage with and persuade the authorities, meaning the men with guns, to let us access the peninsula so we could get to the coastline and surf. We had no idea how to do this as there was no standard procedure.

After driving north from Nouakchott through the Sahara Desert, we arrived in the Nouadhibou area and found a place to stay in a caravan park popular with long-distance overland European travellers. We hired a vehicle and driver immediately, as the entire Peninsula is littered with landmines after decades of fighting and having someone driving who knows where to drive and where not to drive was essential. Our driver said there was currently no fighting anywhere on the peninsula and while he didn’t know anything about surfing, he said it is possible to access the coastline, with permission from the Comandante. 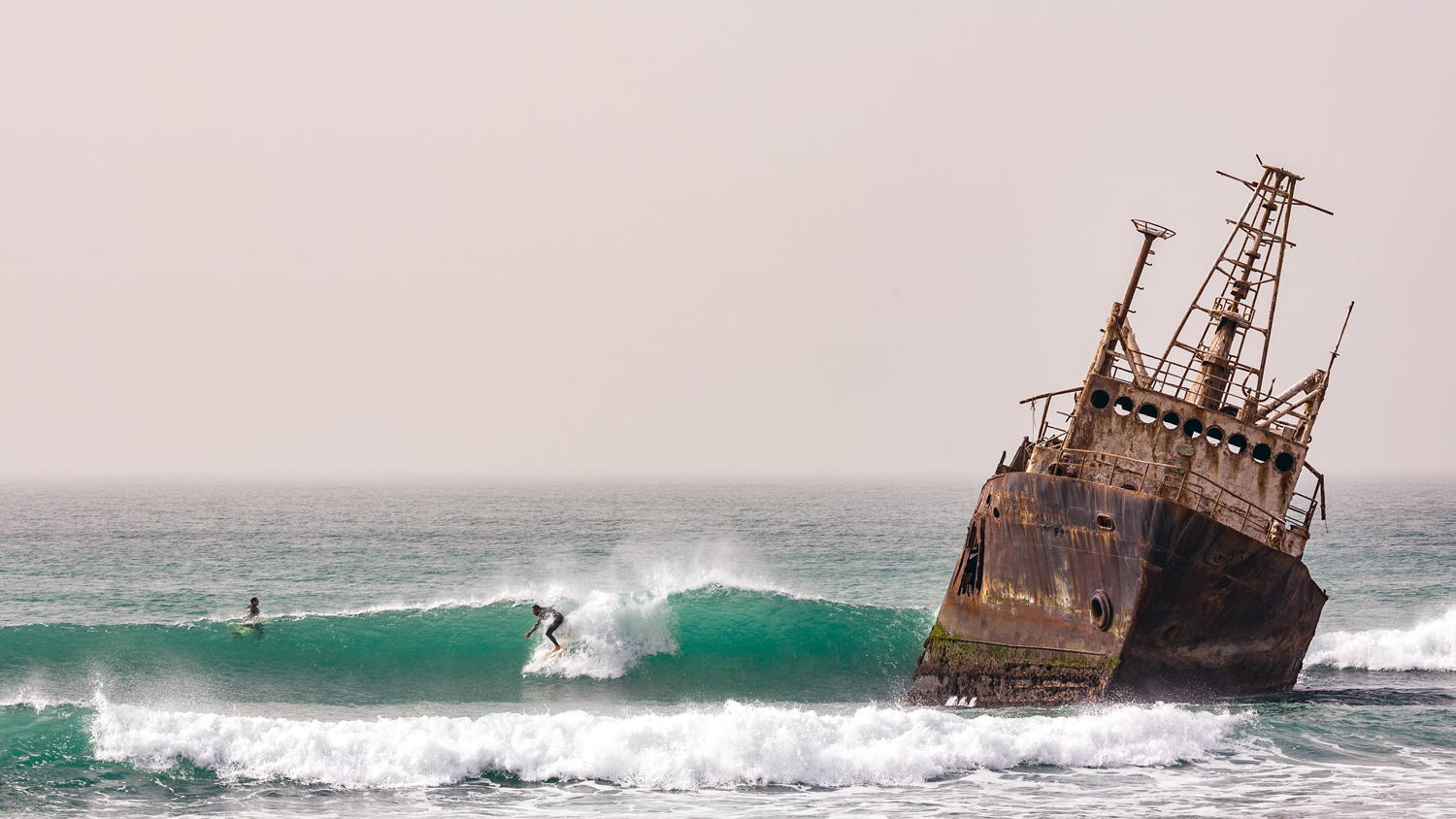 We went to check the surf the next morning and were immediately confronted by the men with guns, asking where we were from and what we were doing. We were escorted to meet the Comandante, who lived with his garrison of soldiers in a collection of abandoned buildings in the former Spanish city of La Aguera.

They had a large generator for electricity and several vehicles in various states of disrepair. We introduced ourselves and it quickly became apparent English wasn’t welcome – the entire discussion took place in French and Erwan handled it well, explaining clearly who we were and what we wanted to do. The Comandante must have been charmed as he welcomed us, saying as long as we came by every morning to check in and let him know what we were doing that day, we were welcome to surf and photograph on the peninsula.

This was a relief, as if the Comandante had said no – no surfing, we couldn’t have argued. You can’t argue with the men with guns, in Africa, they make the rules. The Comandante did come by a few days later, when we were surfing in the shadows of El Castelo, the old Spanish fortress that now guards a well-shaped right point wave that works on the biggest winter swells. The Comandante and several of his soldiers with their AK-47’s came over to where I was shooting from the rocks, to film with his hand-held video camera.

A set came through with one surfer on each wave, as per normal surfing etiquette. He filmed, but this wasn’t what the Comandante wanted. With a series of shouted commands in French he made it clear he wanted everyone to catch the same wave at the same time, so he could film. Our group complied on the next set with four surfers taking off at once for a party wave. You can’t argue with the men with guns. The Comandante seemed pleased with the footage, we exchanged pleasantries in French and he and his men were soon off on their regular patrol of their territory. 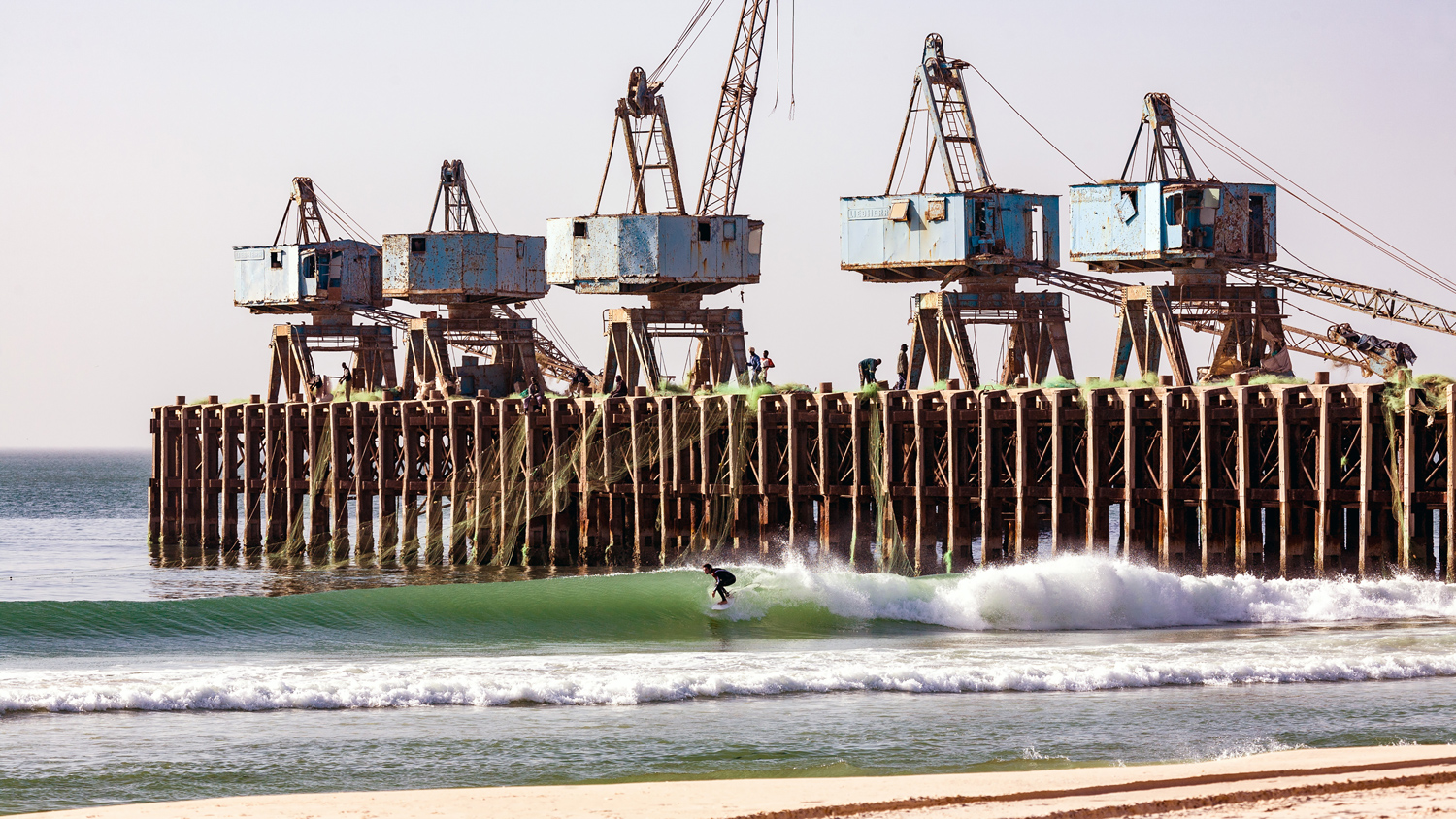 We spent several weeks in the area, driving across the flat desert from Nouadhibou town in the chilly winter mornings, staying well within the tracks of the previous vehicles. The Comandante was as good as his word and we regularly picked up hitchhiking soldiers from his garrison and gave them a lift in the back of our truck.

John Callahan is a founding member of the SurfEXPLORE Group, a multinational collective dedicated to the discovery, documentation and conservation of new surfing locations worldwide. Click the links to follow them on Instagram and Facebook.

The Stories Of Jack McCoy's Most Exciting Surf Discoveries

In current times, it’s hard to resist feeling a nostalgia for the heady days of global surf travel.  So, we’re encouraging you to indulge it enthusiastically with our ongoing series of [...]

The Stories Of Martin Daly’s Most Exciting Surf Discoveries

In current times, it’s hard to resist feeling a nostalgia for the heady days of global surf travel.  So, we’re encouraging you to indulge it enthusiastically with our brand new series of [...]

The Legend of Lance's Right (Don't Call it HT's)