John Eldridge flicks up his visor and looks south. In the distance, where a carpet of rolling green fields fall away into the Atlantic, he can just about make out the small cluster of houses where he grew up. Looking down below, he points to tiny waves folding over on the sands of Boobys Bay, identifying the exact spot where almost four decades earlier he stood up on his very first peeler, igniting a lifelong passion for surfing that has served as the driving force in his life ever since.

A minute later, he climbs back into the seat of the Harley-Davidson Street Glide, throwing a quick glance over his shoulder towards the empty road, before twisting the throttle and bringing the bike roaring to life. In a blink, he’s off, flying down the narrow lane in the direction of the lighthouse, with the smooth, instinctual glide of a rider who knows this stretch of tarmac like the back of his hand. 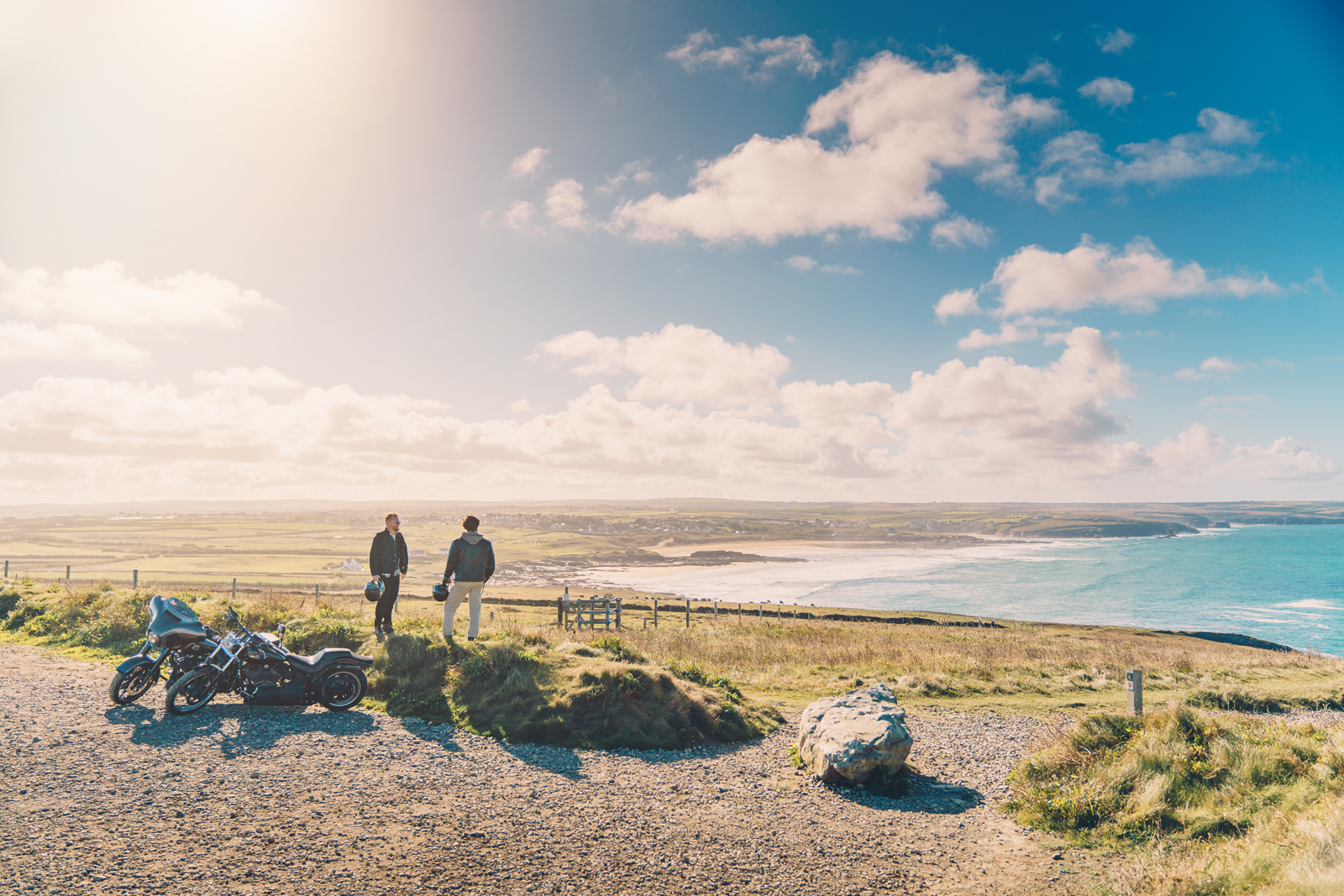 (Above)John and friend Louie LePrevost stop to take in the view along a familiar stretch of coast. (Below) The Harley-Davidson Street Glide is fitted with an array of mod-cons, including a windshield that allows you to ride in style with visors up. Photos: Lewis Harrison-Pinder 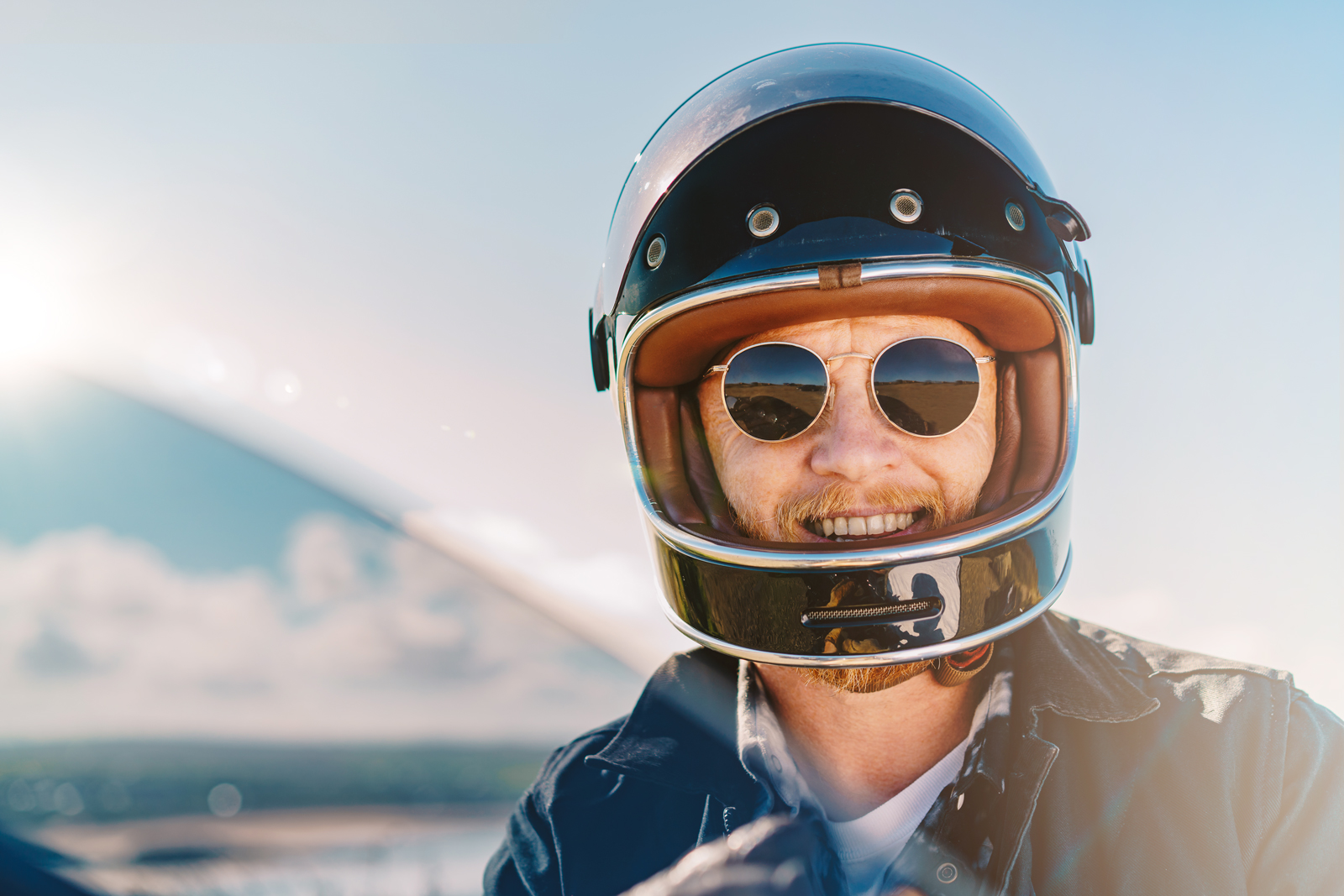 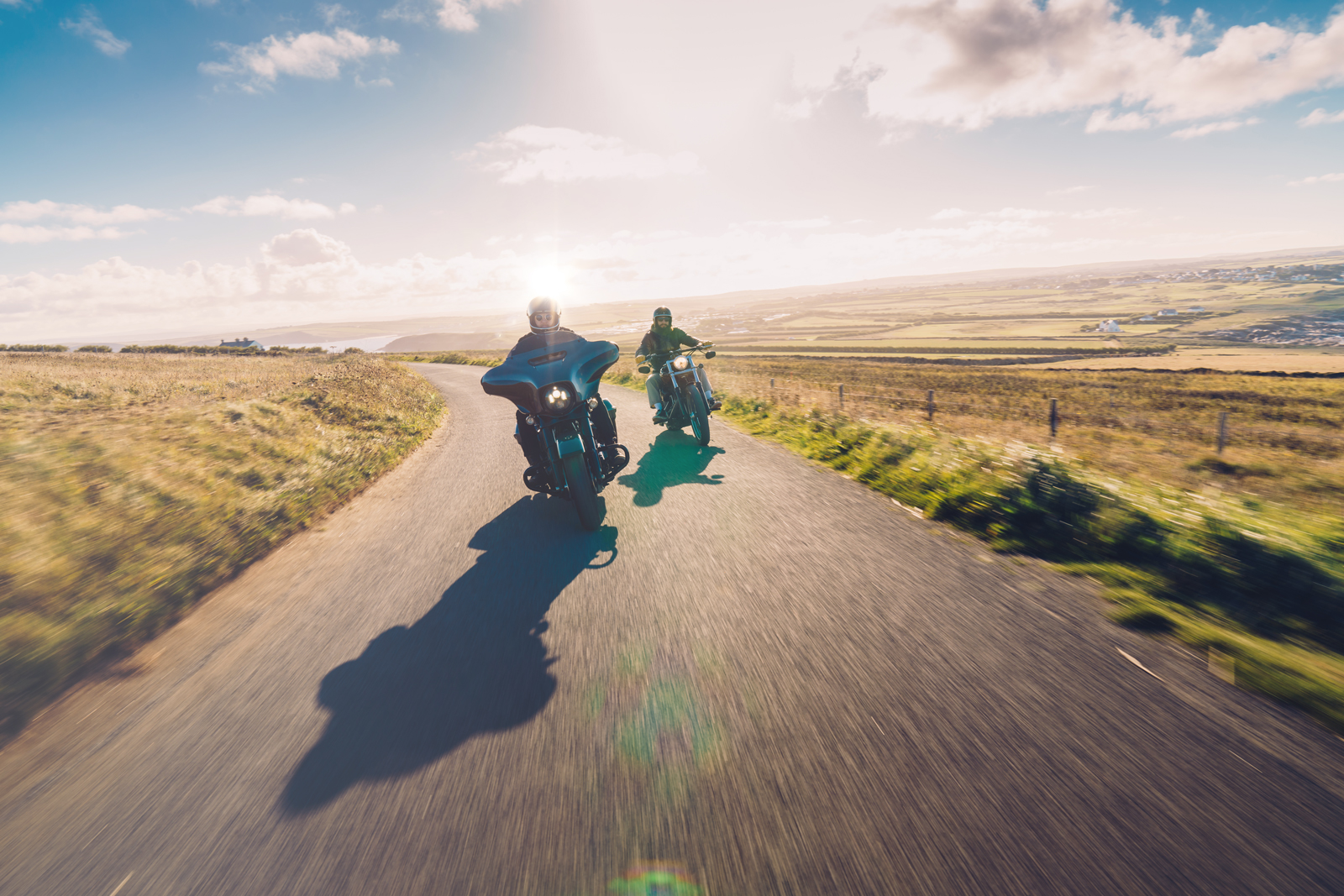 John has been into motorcycles for many years, but recently, with three kids under six and several businesses to run, he doesn’t get as much time to hit the coast road for a ride as he used to. So, when Harley-Davidson extended an offer, one morning in late summer, to try out their newest Street Glide touring bike, he leapt at the chance.

With several hours to play with, John quickly settled on one of his favourite routes; north from his home in Newquay, up to Trevose Head; past the beaches he grew up on and east to join the Atlantic Highway, where his roadside cafe Strong Adolofos sits just a click south from the junction. Although chosen for its wide-open bends, sweeping coastal vistas and prime stretches for opening up the throttle, the route also serves as an artery of sorts, connecting many of the most important places in John’s life to this point. 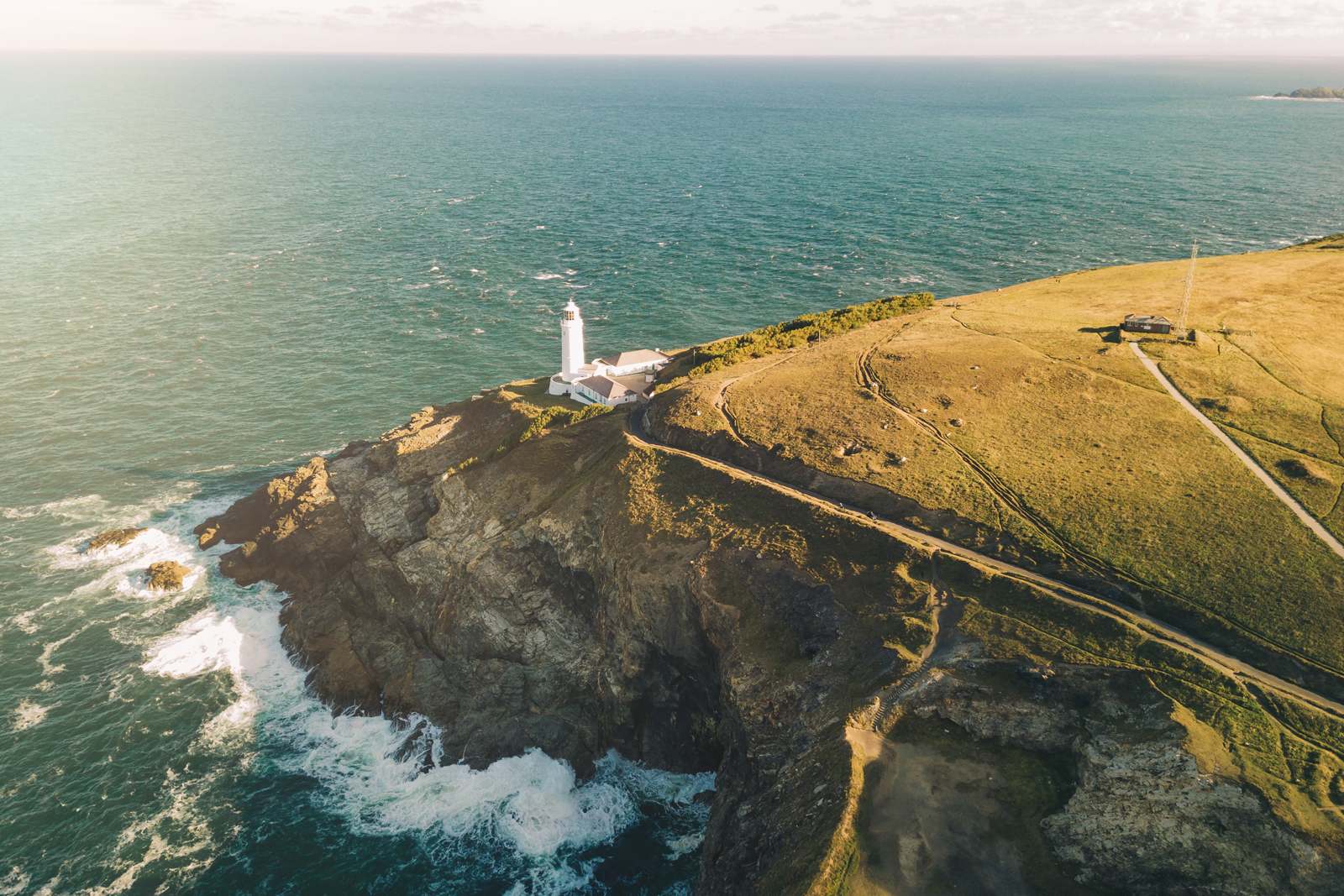 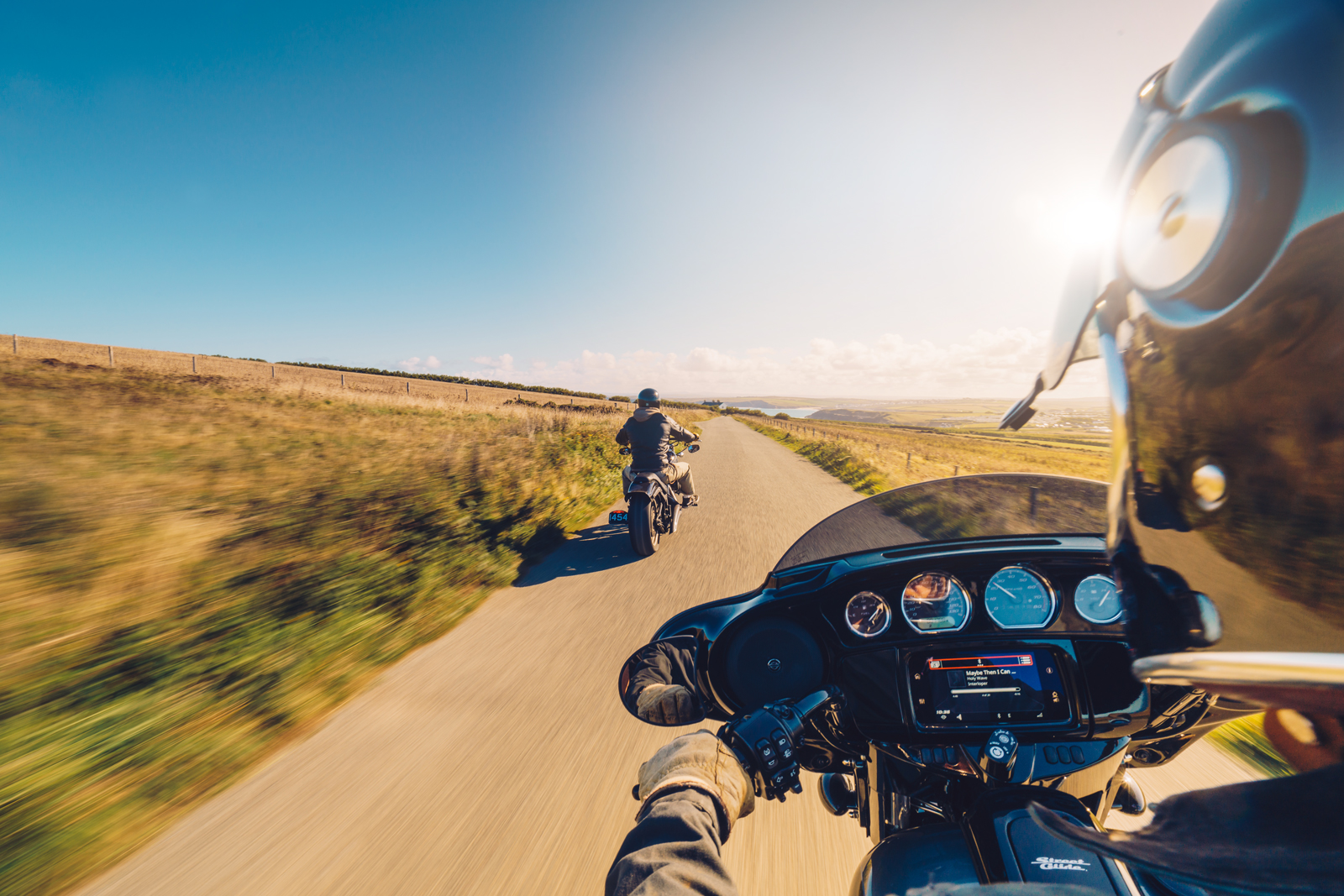 “I rode a ‘78 Harley-Davidson Iron Head Chopper for years,” he tells me when we catch up back in Newquay for a debrief, “but I haven’t had much experience with modern bikes. That ride has kind of opened my eyes to them.”

“It was really enjoyable,” he continues, describing in detail the supreme comfort offered by the bike’s spacious seat and the joys of built-in speakers and a curved windshield, which prevent wind blasts, even at high speeds.

The reason John isn’t accustomed to such luxurious features is that his passion for motorcycles originates from the nexus of board, vintage bike and DIY culture, which spread simultaneously from California and Indonesia, emerging into the public consciousness around ten years ago. To find out how it drew John firmly into its grip, we have to go right back to the beginning.

Even before he moved to Cornwall to live with his dad, aged 12, he was already obsessed with surfing. He’d spent years venturing down on holiday, returning to his primary school in Surrey with photos of him gliding across small summer peelers on his dad’s hand-me-downs, much to the awe of his assembled classmates.

He vividly remembers getting his first custom board, aged 15, off legendary local shaper Adrian Phillips, of Fluidjuice surfboards, whose craft he continued to ride exclusively in the several proceeding decades. Upon finishing university in Cardiff – chosen, of course, because of its proximity to good surf– he was presented with a choice. Fly off and chase waves for a year, or head over to Colorado, where his mum had recently relocated and spend the winter strapped into a snowboard.

He chose the mountains and one season on the slopes soon led to five more. Between runs, he started filming some of the talented Brits he’d met on the piste and, along with his brother Tom, began collecting and cutting together footage for a series of British snowboard films, which the pair released on VHS and later, as a DVD on the cover of Whitelines Mag. 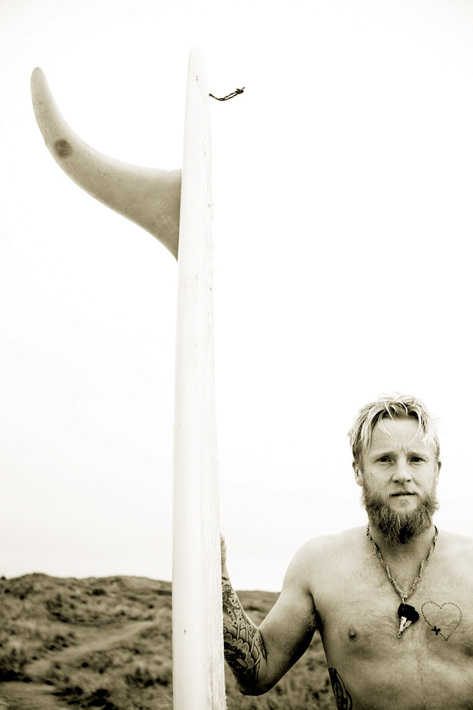 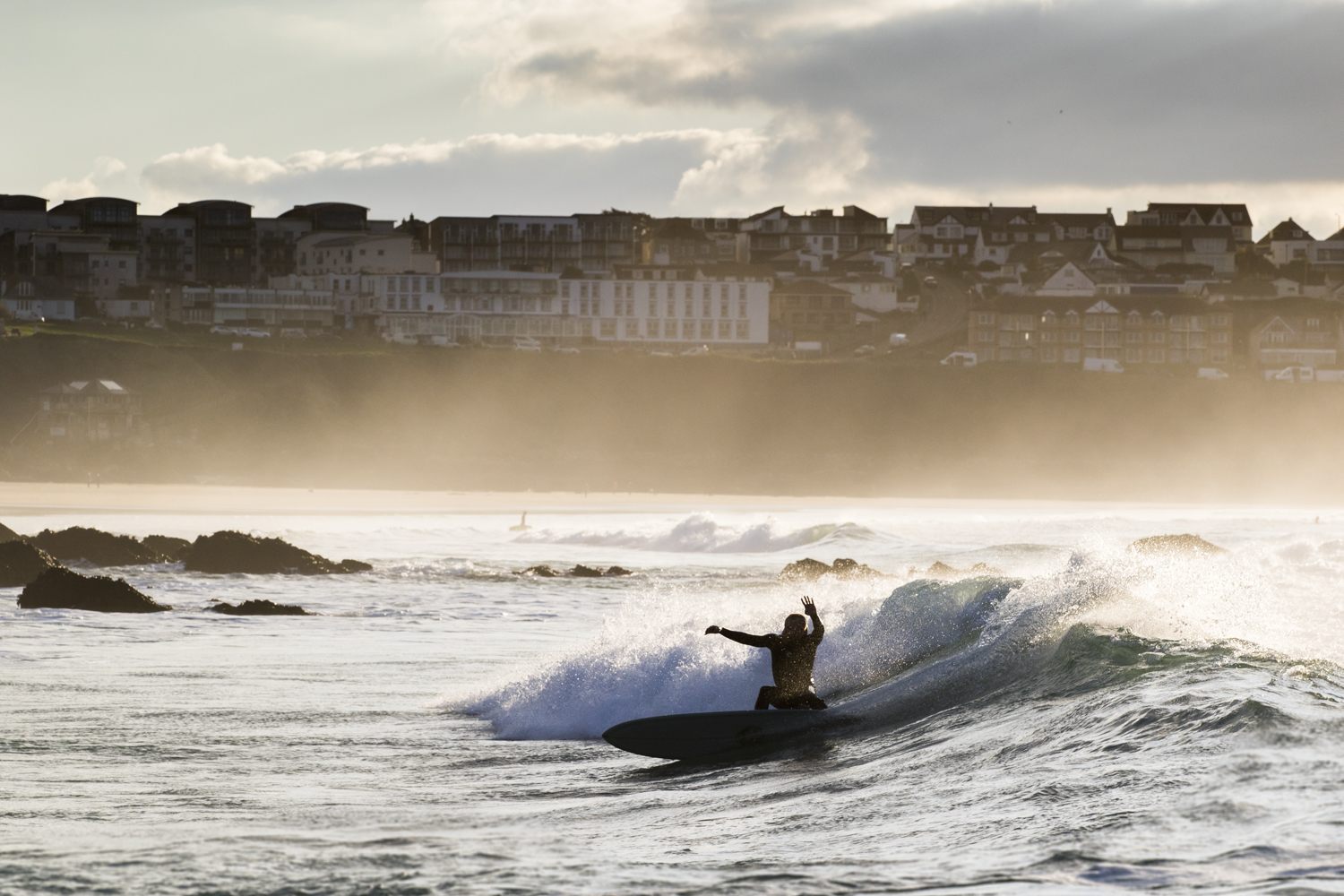 (1) John and an experimental fin outline. Photo Greg Martin (2) Taking a slice out of a sunset runner at Little Fistral. Photo Luke Gartside

Each summer, they’d return to Cornwall, to surf and earn a bit of money serving food to tourists. It was during one of these trips that a friend handed John a VHS of a new surf movie by Californian filmmaker Thomas Campbell. It was called The Seedling and it featured a burgeoning movement that was just beginning to waft its way over from across the pond.

“They were riding classic logs with this style I hadn’t seen since watching really old surf films,” John recalls. “As soon as I saw it, I was like wow, I’m going to do that.” Like most surfers, he’d spent plenty of time as a youngster messing around on a longboard, but this was something different. A whole new approach, away from the high-performance inspired vanguard, based on a classic style and an appreciation for a wide array of traditionally inspired surf craft.

As soon as the credits rolled, John called up Adrian and asked if could make him a single fin log, to which Adrian delightedly obliged.

I first met John at Desert Point; the legendary left-hander that barrels for a few hundred yards along Lombok’s westerly tip. It was a pumping April day in 2012 and through the glare, a few dozen surfers could be seen jostling on the peak. However, among the throng, John clearly stood out, silhouetted against the bottle green walls as he threaded impossibly fast sections on a bright red 7’2 single fin. It struck me, as the assembled surfers picked their way across the reef once the sun fell below the horizon, he was the only one there not riding a thruster. Since picking up that first log from Adrian just over a decade before, his wave-riding horizons had expanded to include an array of unusual craft, including all manner of logs, bonzers, twinnies, single-fins and mid-lengths (although it wasn’t an established term back then). 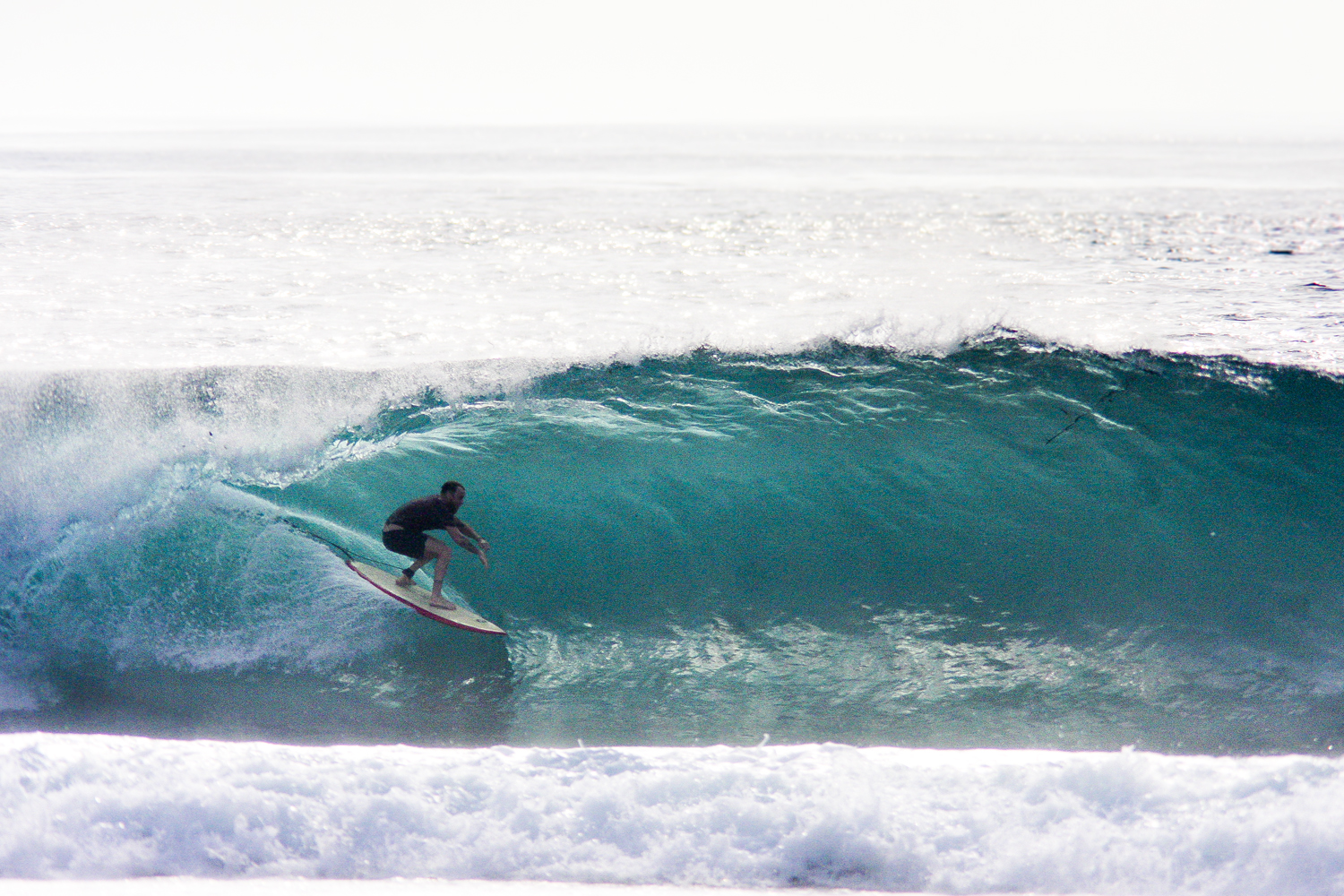 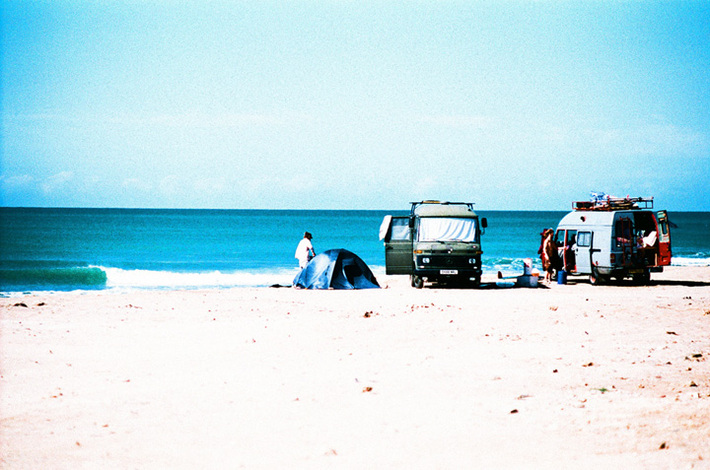 After a torn ACL saw him take a break from snowboarding and settle in Cornwall more permanently, he continued to make films with his brother, until one day he decided it was high time to hit the road again. He sold his house, bought up an old ex-military ambulance, packed up his quiver and set off south, down through Europe, Morocco and into Western Sahara. Then, to Indo; the bright lights of Bali, big barrels in G-Land and finally here, to the long spinning cylinders of Desert Point. Looking back, many of his experiences from that year proved seminal to the trajectory his life has taken since. Not least, because it was there, in Lombok, that he met Mathilda, the woman who would later become his wife. But also, because of a series of smaller discoveries. While cruising through Canggu, he happened across the just-opened Dues Temple Of Enthusiasm; a cluster of events spaces and workshops – a place for surfers, artists, shapers and moto-enthusiasts to gather, build things and indulge their creativity.

“I’d always had in the back of my mind that I want to get into riding motorcycles,” said John, “And through my teens and twenties I kind of thought it’d be for when I was older when I couldn’t surf as much. But, in Bali, I suddenly saw the connection between surfing and motorcycles and I knew it was something I wanted to be part of.”

John had already dabbled in shaping a few surfboards alongside Adrian and was always open to new avenues of creative freedom. So he figured, why not learn to build motorcycles too? As soon as he got home, he got his riding license and set about work crafting his first custom chariot. First, he found an old bike – “a proper basket case,” he says – which he stripped right down and then rebuilt, breathing into it a whole new lease of life. And from there, he was hooked.

“We figured we needed to have a business,” says John, “and Thilda was really keen to open some sort of cafe and I’d always thought that could be kind of cool to do somewhere too.” When a space came up at Hawksfield – a collection of warehouses just off the Atlantic Highway – with enough room for a workshop, shaping bay and large roadside cafe, it was too good to miss. From there John launched CMBL, a custom board and bike outfit and worked alongside Thilda to create Strong Adolofos, named after a famous circus strongman from her Swedish homeland. 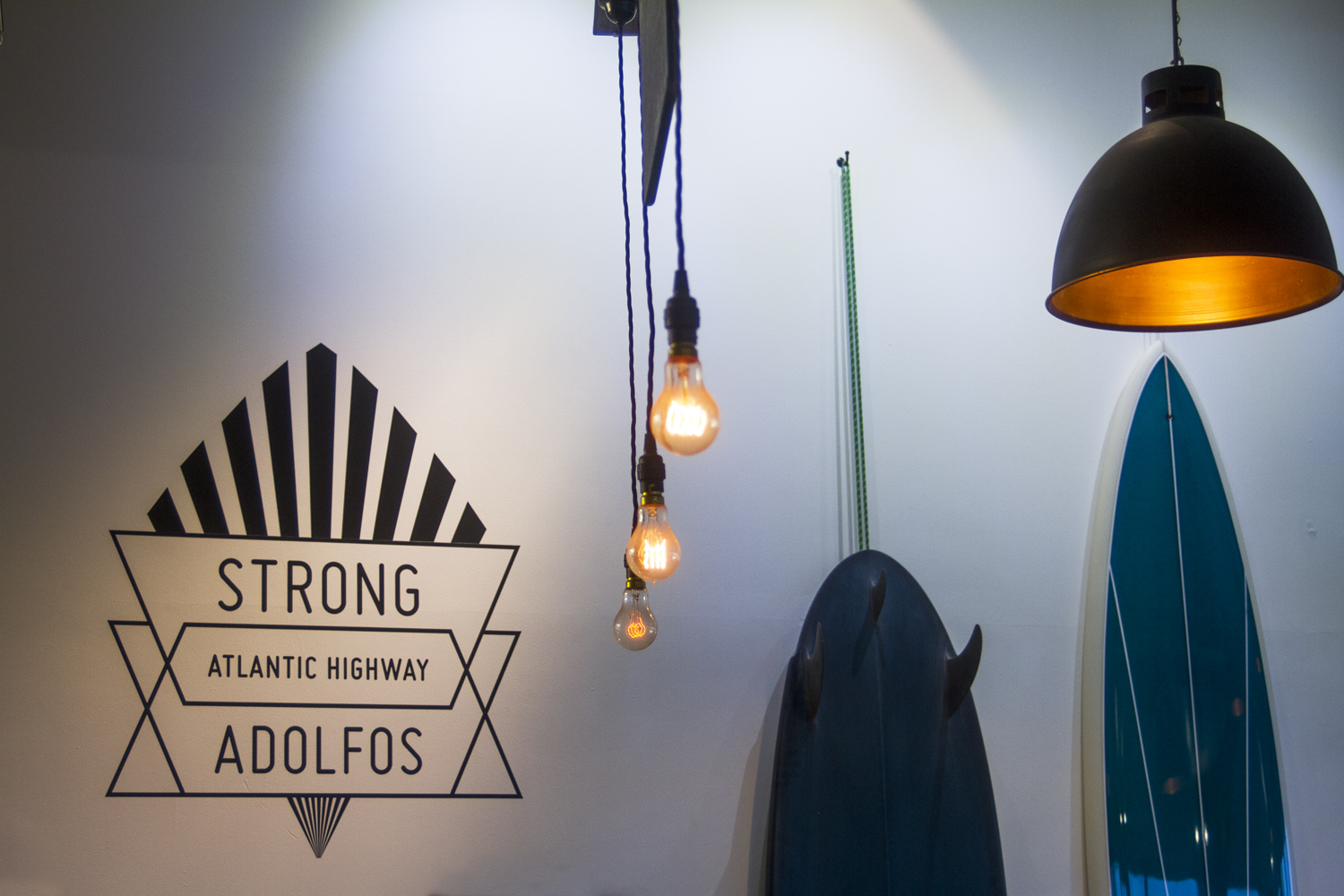 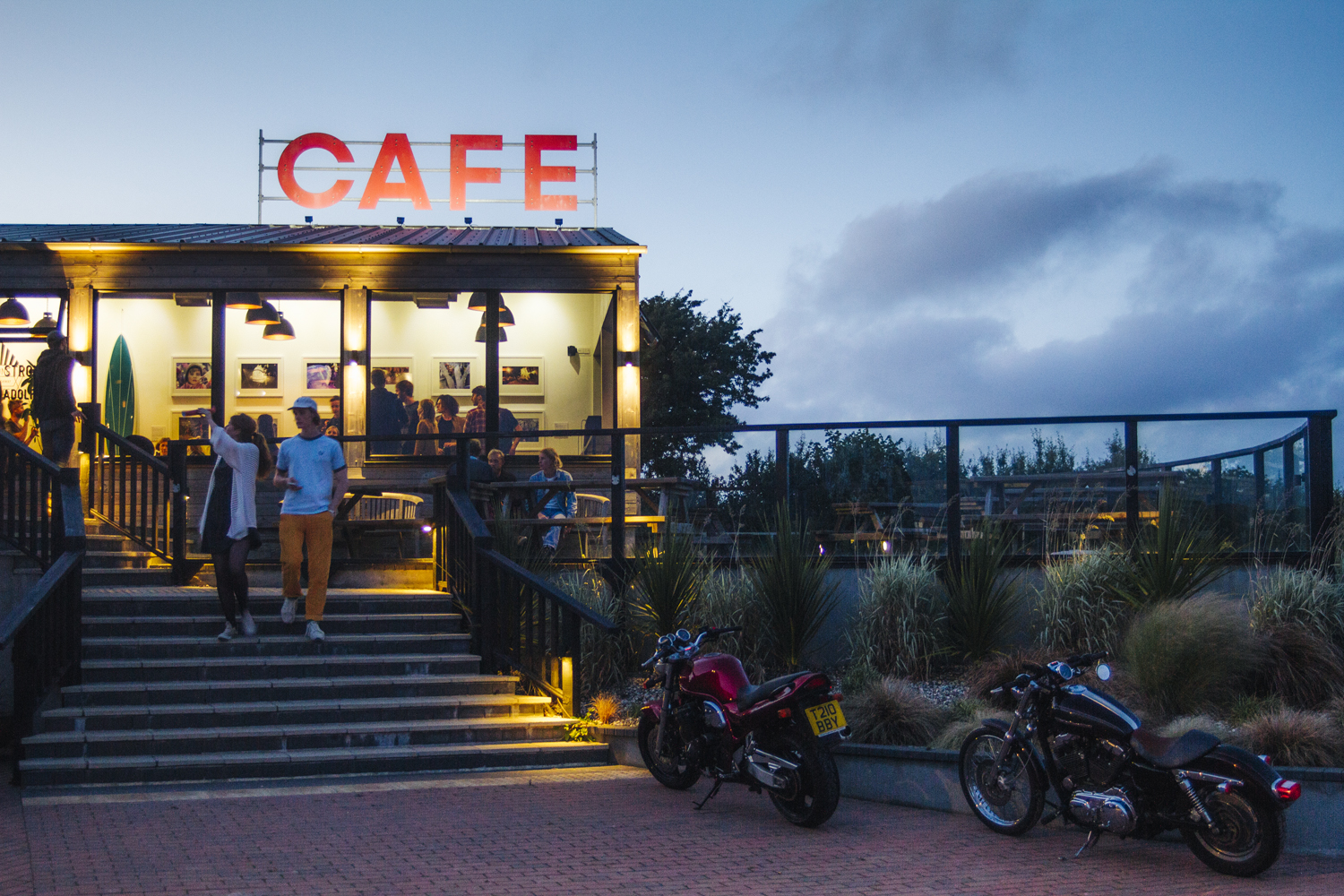 After opening in 2013, Strong Adolofos cafe has become a well-loved fixture of the Atlantic Highway. Photos: Luke Gartside

The next few years passed in a whirlwind of bike grease and milk steam while the pair worked tirelessly to get their new businesses off the ground. CMBL was always the passion project, but John found success working on a few custom commissions and showing some of his creations at the Bike Shed Show in London. “We also took them down to Wheels and Waves Festival in Biarritz three years in a row,” he says “And I raced them up in the mountains at the Punk’s Peak. That was definitely a highlight.”

In the years since, his life has taken a serious pivot towards family, with any free time allocated to surfing. While tinkering and riding have taken a back seat for the moment, just as he envisaged when he was young, he’s sure there’ll be back in his life at some point in the future.

Want to set out on your own two-wheeled adventure? Click here to locate your nearest authorised Harley-Davidson rental dealer.

Surf & Motorcycles; A Potted History Of An Unholy Union

[We’re excited to announce our friends at Harley-Davidson will be joining us all summer at the Wavelength Drive-In Cinema, offering attendees the opportunity to check out their range of classic [...]

We've had a great summer at Watergate Bay with our friends from Harley-Davidson up at the Wavelength Drive-In Cinema, offering attendees the opportunity to check out their range of classic and [...]

Anyone that has paid a visit to the Wavelength Drive-In Cinema this summer will have spotted a gleaming fleet of Harleys, sat atop the Watergate clifftop looking great. And we can testify that [...]