Home » Life Under Lockdown On The High Seas

Life Under Lockdown On The High Seas

This year, we’ve reported often on the adventures of the Knight family.

Over the last few months, they’ve been sailing around the North Atlantic on their catamaran, along with Andrew Cotton and Mikey Corker, while working on an ongoing film project called ‘Savage Waters.’

What began a few years ago as a simple idea to search for waves on some of our hemisphere’s more inaccessible islands has turned into one of the biggest and most comprehensive exploratory missions of its kind and we’re super excited for the release of the film, coming sometime next year. You can follow along with their journey on Insta @savagewaters_.

Earlier today we received a fresh dispatch from Matt Knight via his Facebook page, with an update on their whereabouts and some insight into the plight of those living out the global Covid crisis confined to the high seas.

Here’s what he had to say:

STAY PUT… or HEAD OUT TO SEA??

Living at sea is amazing some of the time (and for that reason we choose it as a part of our lives). But it’s also work for us- and like all jobs, there are occasionally bits that aren’t so great.

At sea at the moment, the norms of maritime law that supposedly guarantee safe haven to vessels & crew in need of shelter, have kind of gone wonky. Remember the passengers aboard all those cruise ships that made the headlines, and were eventually flown home? Well spare a thought for the Phillipino, Indonesian and Indian crews that were making the food and beds for all those passengers… apparently more than 100,000 low paid workers are currently stranded on ships around the world, often 000s of miles from their families, with Covid 19 rampant on board, crap health provision, no pay, and no repatriation flights. Huh.

In the live-aboard boat world that we are most familiar with, we are hearing of folk who have been summarily banished from one country or another, sent out to sea with no place to go. Others who have been locked down in insecure and dangerous anchorages. Some families with kids on small boats have been impounded for weeks in harbours, without permission to step foot ashore. Yet others who were already on passage when this all started, and are still at sea, bouncing from port to port and country to country, being refused entry and running out of food & water. It’s a crazy world of floating uncertainty out there in the ocean right now. Meanwhile the Northern Hemisphere Hurricane season is fast approaching, lending an air of increased urgency to the “what to do & where to go” thinking amongst the live-aboard community.

Lawlessness in international waters is nothing new- it’s both an attraction (freedom!) and a risk (real) when you set off on a small boat even in the best of times. But there’s a whole ‘nother layer of crazy when you have sailed for 3 or 4 weeks on a small boat to get somewhere, only to find that the ports in an entire country are closed. The longest we know of to date is a boat that has done 40 days & counting. The last I heard, they’re currently in a slightly scary desert anchorage in the Red sea, having been chased off (including at Gunpoint) from several countries in the Indian Ocean, Middle East, and East Africa, and still no idea where, or when they are gonna get ashore for provisions. Let alone find a safe place to hole up in safety for a while.

Of course Governments & embassies aren’t really interested at the moment. The numbers affected are relatively small, and hey, they chose to be out there eh? It’s not like we’re talking about refugees in dinghies here. But at the same time it’s all too easy to lump all those living on yachts & boats into a single bracket that includes billionaires on megayachts- and so the insecurities & worries of those scratching their way around the oceans on small and scruffy cruising boats isn’t exactly a mainstream public or political concern. Fair enough. But in reality there’s still some pretty heavy personal stories we are hearing, for those that are out there right now in genuinely scary situations.

With all that going on we’ve been incredibly lucky where & when our own Covid lockdown started. There’s been no C19 cases on this particular Cape Verde Island (Sal); we were here, cleared in & filming, well before the state of emergency was declared, so we were already familiar to the maritime police and port authorities. Mikey & Cotty made it out before the flights stopped, to be back home OK with their families. Taz got the last repatriation flight out so he could lockdown at home with P & Clo, and Harri got out of here and onto pretty much the last Flight IN to Oz to start her job there. Jemima is blissed out growing veg & with Marcus in Brizzle. So… we haven’t had to worry too much about the kids.

Here, we have been able to go ashore to provision and exercise throughout, and the water in this anchorage is clean enough to swim and fish. There’s a few crazy French and Dutch boats with kids aboard (our little floating lockdown neighbourhood), and the Cape Verdian people have been incredibly generous and kind- which they could have easily been forgiven for NOT being right now.

Suzanne & I agreed that being sat here in the anchorage in Palmeira has been a bit like being on a long ocean passage, but without the night watches or rough seas. We’ve done loads of overdue maintenance jobs and repairs. But we’ve now run out of the materials required to do any more. The restrictions on social distancing and the public mean that volunteering in local environmental projects or in education is not an option. The lockdown also means that no inter island travel is possible, and winter swells are all but gone; so researching the next filming locations is off for the foreseeable.

As elsewhere in the world, there’s no certainty at the moment if things are going to stay this way for a while. It could easily get worse, as there is C19 on the main Island of Santiago, and two of the others- it’s bound to make its way here at some point. Until that plays out one way or another the movement restrictions and uncertainty look set to continue. There’s no flights out, (and this anchorage isn’t 100% secure); so we can’t just lay up the boat and head home quickly.

So…. It’s time to make that choice. Stay put, or head out to sea? The safe answer is probably to stay. But its more complicated than that. Suzanne has scans overdue, there’s work piling up at home, and so the actual Answer lies somewhere in the attached picture… but it’s a head scratcher. What ya think??” 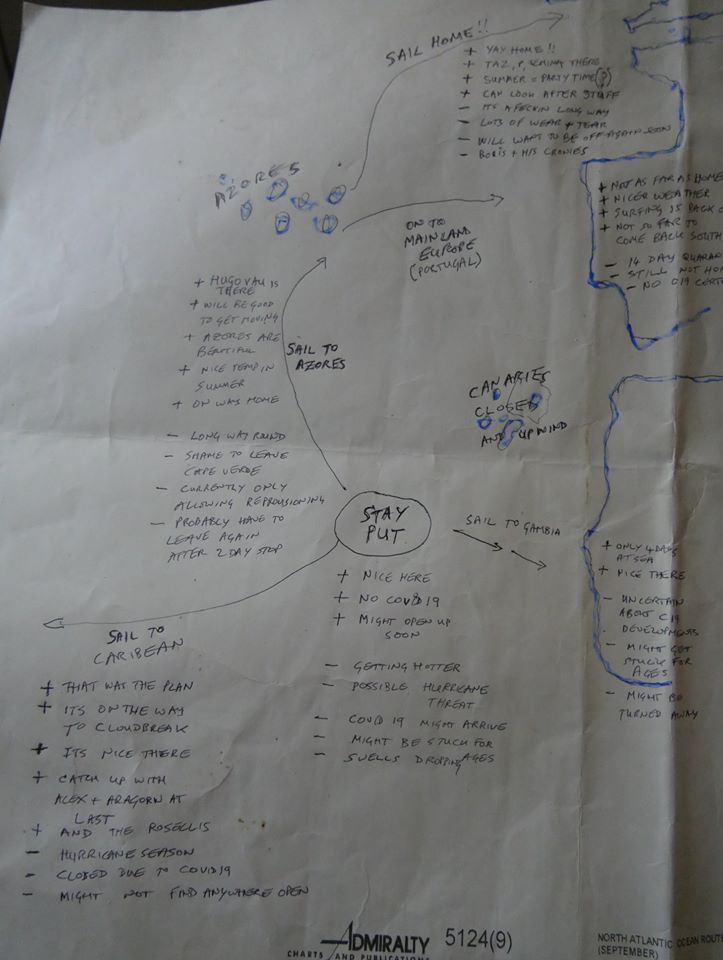