Not because of any misgivings about the suit’s appearance, mind. The colour, anthracite, looks great; an earthy, neutral-toned dark grey. The logos are minimal; small and white at chest and sleeve, with a suit-coloured, and thus very discrete, Stay Salty between shoulder blades.

Not because the surf forecast wasn’t great, either. It wasn’t, but that’s never bothered me too much in the past.

Not because of any threat from predatory marine wildlife, quite the opposite. With the spring equinox upon us, it’s peak birding around here. Just this morning, a lone razorbill was frolicking yards from the shorey, sanderlings were doing a courtship dance over the A-frame peak that dominates the beach. A km or so out back, keen eyes might’ve just made out splashes of dive bombing raids, probably gannets. Exciting times for the amateur birder.

No, my chief concern was the cold. Again, not something I usually worry about, but this being a 3/2, and this also being March, I couldn’t shake the feeling that I was donning a summer wetsuit prematurely, a season or two early.

For my last surf two days’ previous, when air temps were some ten degrees warmer, I was wearing a hooded 5/4/3mm (a Manera, obvs).

Either way, him not immediately expiring on the sand from heat exhaustion despite the best efforts of paramedics, the lack of any GoFundMe link at the bottom of the Stab review to cover medical/funereal expenses, only furthered my swelling apprehensions.

You see, the water here is still but a mere 12 degrees. In fact, February’s balmy weather has been replaced by grim northerly circulation, heading down from Britain. Alas, my native islands’ soft power stock has taken a pummelling of late. The source of the dreaded ‘British variant’, and now as the bearer of cold, cruel winds flung down vertical isobars lined up along meridians of longitude. 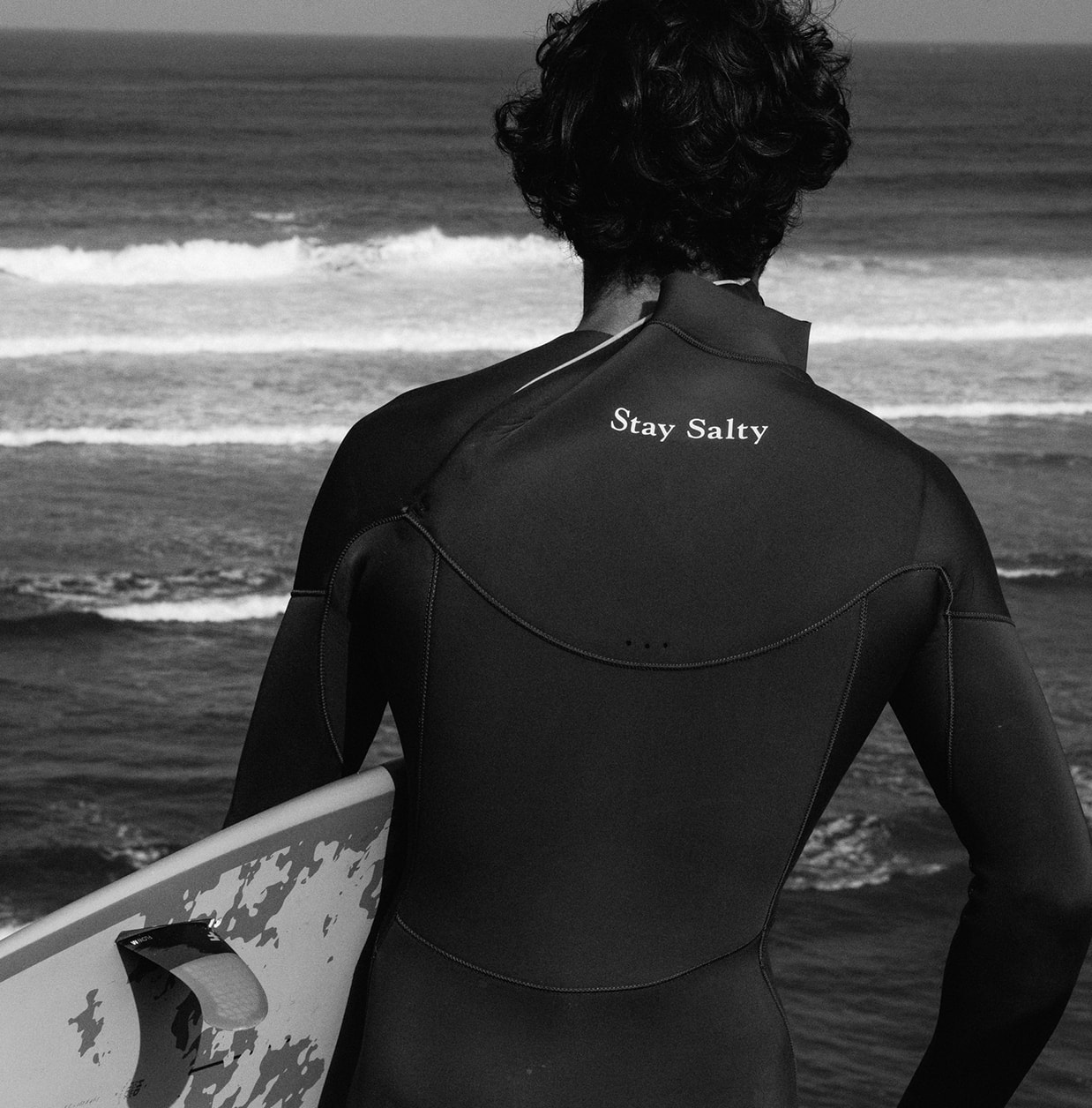 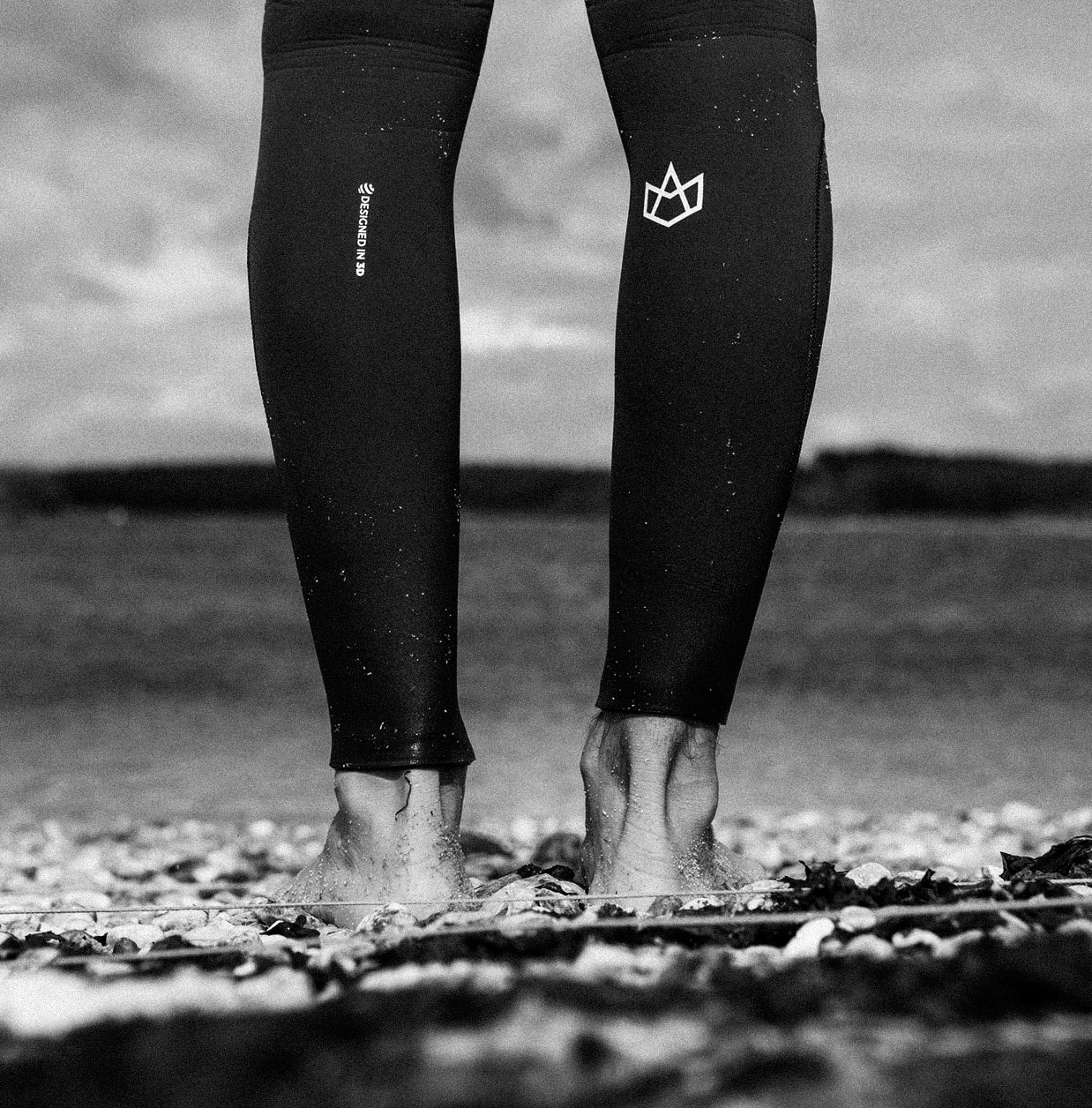 Still. Never let it be said thoroughness isn’t part of the Evans oeuvre. When I’m looked back on fondly by future generations, commemorated by blue plaque or otherwise, the well chosen words mightn’t laud my gallantry in battle. But don’t count out there being some metaphorical mention along the lines of the trenches of surf product review journalism.

Jeans don’t get tested by bums on sofas watching Netflix, they get rigorously scoured by abrasive materials on slow orbital sanders. iPads get dropped from moderate heights, probably. Oakleys, we were once led to believe, have that weird spikey hammer thing fired at them a million times a second. They’re not tested drinking a pint of IPA on an awkwardly hazy beer garden afternoon.

Given all this over-testing, surely I could wear a summer wetsuit in winter. 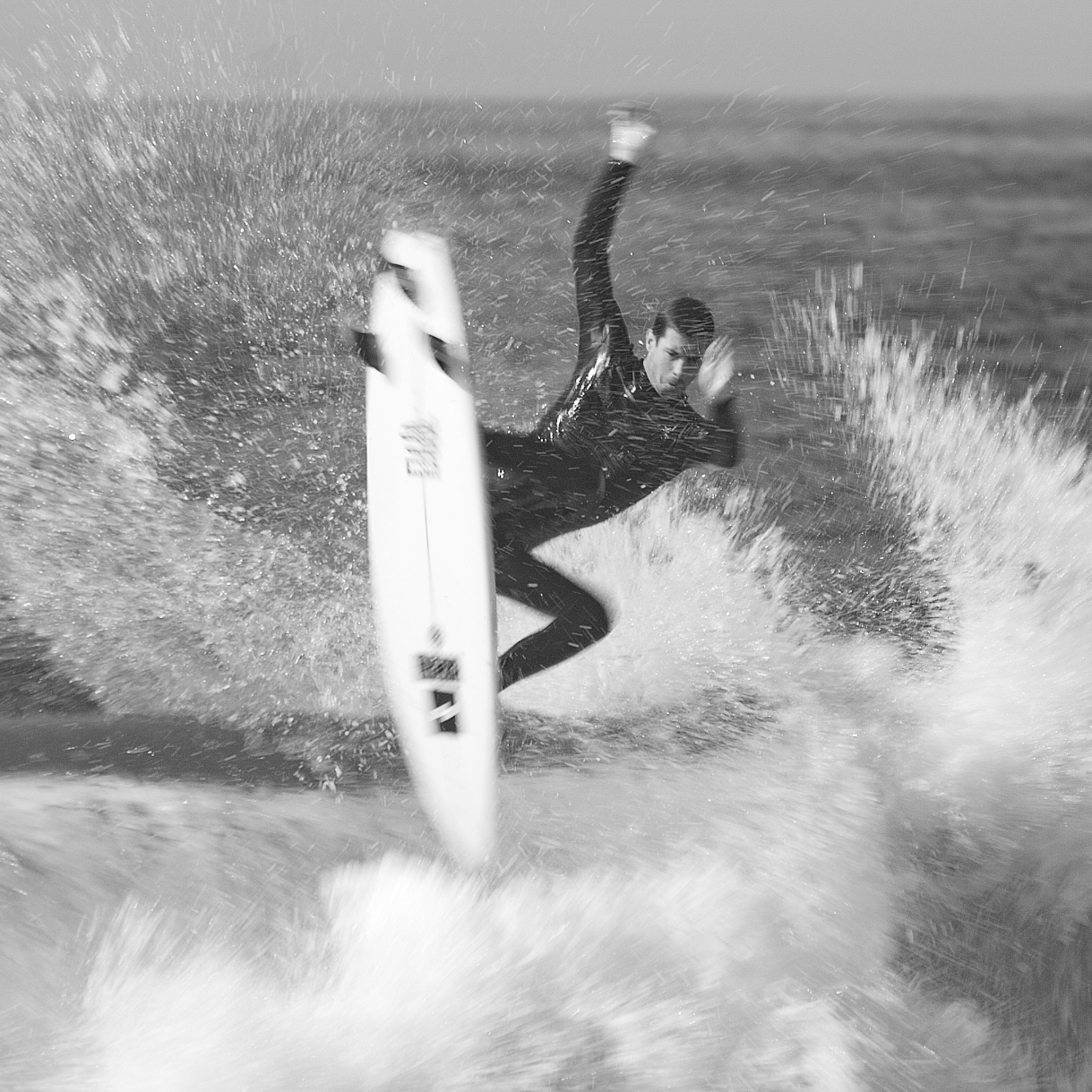 Manera’s distinction in a sea of same comes chiefly via their 3D design process. Instead of 2D drawing patterns on a piece of paper, rendering the essential curves flat and thus suffering the pitfalls of the Mercator map of our ellipsoid planet on a flat piece of paper, they’re brilliantly designed as three dimensional forms.

Their 3D designer is so important to them, that when I talked to Manera’s brand lead Julien Salles, he preferred to keep the designer’s identity under his hat. So while you’ll find many similar attributes across many premium wetsuit brands, the 3D design is a genuine Manera-only feature.

So much so that the factory initially tried to talk them out of it. Manera insisted, vastly superior wetsuits resulted. You’ll notice the 3D design as soon as you hold the suit in your hand.

With distinct extra curvature, it looks more hourglass as you hold it, with a more parabolic outline lower legs. Once you have it on, all you’ll notice is how well it fits, with none of the gathering of saggy bits that sometimes develop in certain areas; the backs of knees, armpits and elbows, the groin. 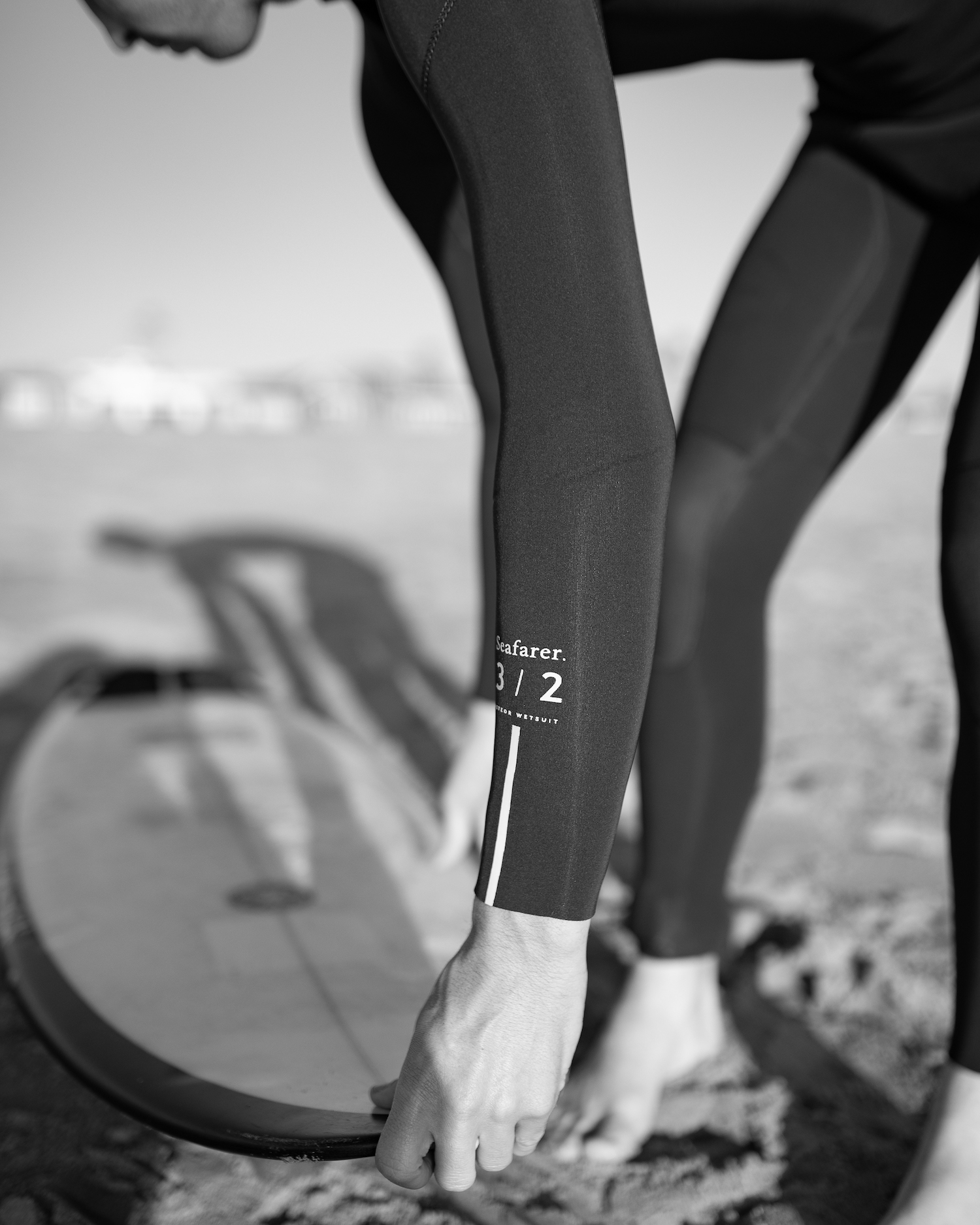 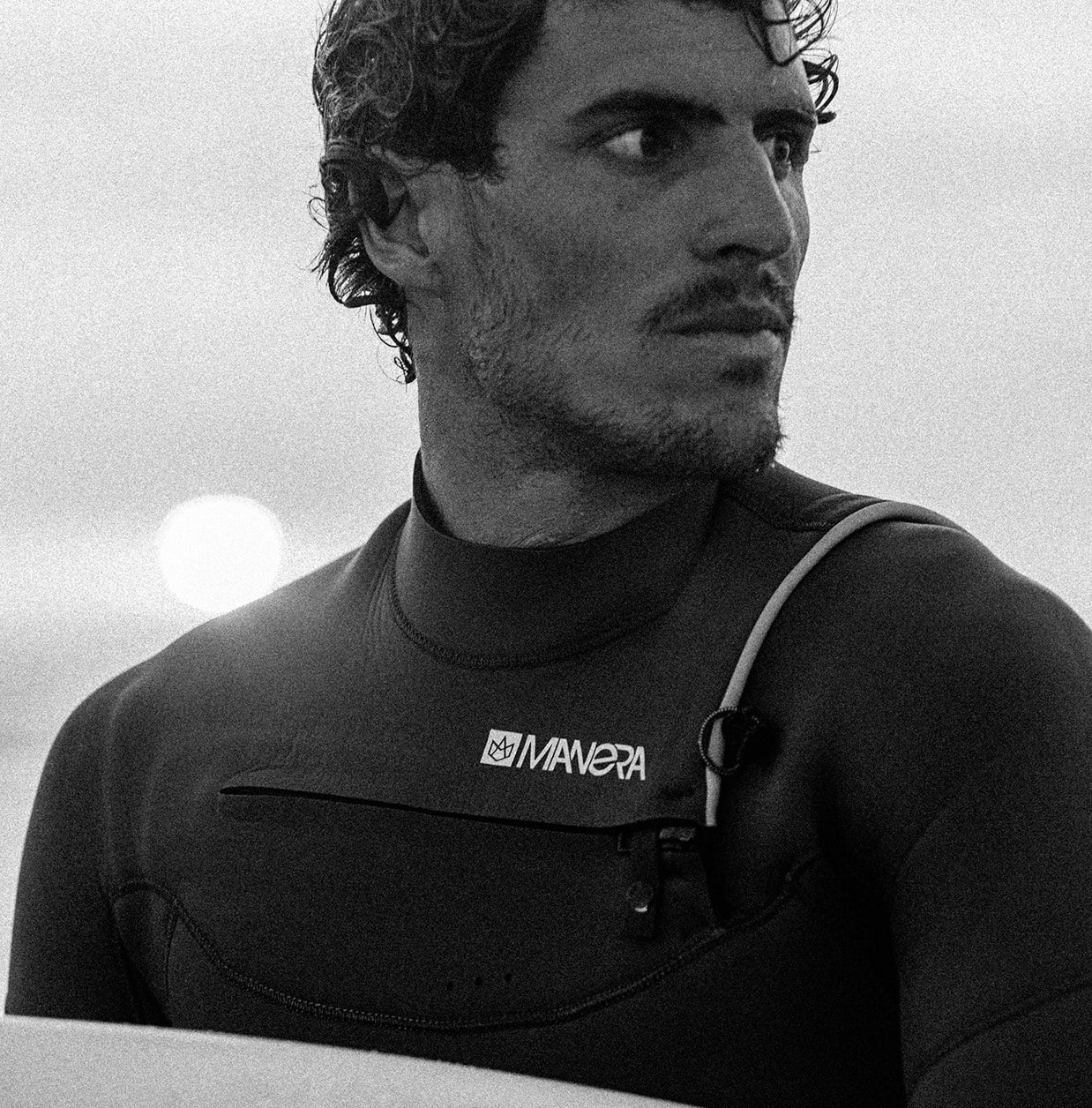 To describe quite how emancipated I felt after months of thick winter rubber, I’d say along the lines of Shawshank‘s Andy Dufresne must’ve felt the moment that sewer manhole cover opened and he stole away, free, into that warm, stormy night. It slipped on beautifully.

I surfed 45mins, let’s call it an hour between friends. Surprising how warm it kept me really, considering how very hors of its recommended usage parameters I’d deviated.

Seams are spot taped at stress areas, but seepage is absolutely minimal, nothing I couldn’t deal with. What that meant was that the flexibility was incredible. It’s a 3/2 but feels like a Desmond, or even something slimmer still.

I paddled with a noticeable extra vim, much to the chagrin of others in the lineup. A spring in my step, a summer suit on my back. A nightmare to share the peak with, probably.

Overall, it feels like the Seafarer’s beauty lies in its simplicity.  A short, slightly diagonal chest zip is entry is secured with simple slider. Knee pads seem to do just enough; they’re there, but not really noticeable. On/offing is an absolute a cinch, the drying time crazy brief. The weight is negligible even when wet, very little water is taken on.

Manera have got an awful lot right with the Seafarer 3/2. It boasts just enough performance tech, with no superfluous crap to go wrong. For summer surfers, for between seasons sessions for the robust, the Seafarer has nailed it.

First impressions: I’ll just come right out and say it; when I unwrapped the Magma Hooded 5/4/3 from its pizza box and bioplastic embellage, my first thought was “It looks a little bit like [...]

How a mum & dad run family business from the French Mediterranean used 3D design, shunned e-commerce and got their suits onto some of the world’s leading freesurfers. In 1994, Raphaël &[...]