Stop No. 9 on the 2015 Samsung Galaxy WSL Championship Tour, the Quiksilver and Roxy Pro France, delivered a week’s worth of the world’s best surfing, with the WSL elite and the classic Autumn conditions combining for a high-performance surfing extravaganza. Medina, who claimed his maiden CT victory in France in 2011, was dominant throughout the 35-minute Final, blasting the clean righthanders with speed, power and progression to post a 17.50 out of a possible 20 and claim an emphatic win. The victory sees Medina move up two places to fifth on the Jeep Leaderboard.

“It feels so good, I’ve been trying so hard this year. I’m so stoked, my board felt really good and everything went my way,” Medina said. “I’m really glad to be back on the podium and especially for a win. I’m stoked to be back in France, which has always been good to me. I promised myself I would win an event this year for my grandfather who passed away a couple of months ago. ”

Durbidge, whose form throughout the 2015 Quiksilver Pro France was undeniable, found himself out of rhythm in the final heat of the event, finishing Runner-Up for the second time this season. Durbidge’s French performance moves him to 10th in the world heading into Portugal.

“I had some really good heats, but the final was just one-sided, Gaby was on every good wave,” Durbidge said. “It was just one of those heats that you don’t want to have again. But I have to just look at the positives, it’s another podium finish and I’m right there for a win, I’ll try to bring it home next time. I love Portugal and have done well there in the past so I look forward to that.”

Despite an exciting opening heat this morning in which he posted massive scores, Julian Wilson (AUS), 26, was stopped in the Semifinals, lacking opportunities to perform. However, Wilson’s equal third in France provides another excellent result for the Queenslander this season, moving him to 4th on the WSL Jeep Rankings.

“It was a really good event, we had some nice conditions, France delivered again,” Wilson said. “I love coming here, it’s always throwing different conditions and you’re always changing boards for airs, barrels, turns. You get to do it all so I think it’s a super exciting part about surfing this event.”

In an all-Brazilian Semifinal matchup, Adriano De Souza (BRA), 28, seemed in control up until Medina posted his second perfect 10 point ride of the event to turn the table in the dying moments. With a third place under the belt in France, De Souza solidifies second position on the Jeep Leaderboard, well within striking distance of Fanning when the title race resumes in Portugal next week.

“Always a pleasure to surf against Gabriel (Medina) but frustrating to lose in challenging conditions,” De Souza said. “Semifinals is another good result though and I’m excited about the next stop in Portugal. I always feel comfortable there and hopefully we get good waves.”

Wright claims back-to-back Roxy Pro France titles and moves up to 5th on the Jeep Leaderboard before the final stop in Hawaii. Today’s victory marks the Australian’s first CT win of 2015.

“I was just feeling it, I was looking at the waves before and I knew it was going to be good,” Wright stated. “It was kind of tricky, I was very selective. This whole season has been super interesting, and I just found out the difference between someone who cares and someone who doesn’t, and I care. I couldn’t have done any of this without Owen and Matt my shaper and the rest of my family, I’m pretty stoked!”

Tatiana Weston-Webb (HAW), 19, was unable to clinch the win during her first-ever Final appearance on the Samsung Galaxy WSL Women’s Championship Tour, placing Runner-Up to Wright. Weston-Webb, who secured the only perfect 10-point ride of the women’s event in the opening round, found an excellent wave on her backhand for an 8.30 but couldn’t back it up on time and placed second.

This marks the young Hawaiian’s career-best result and will propel her to 8th place on the Jeep Rankings before tackling the final event of the Women’s CT in Maui next month.

“I’ve had a really good time in France and good luck here. Being a rookie and making the Final is such a big accomplishment and I’m so stoked to be here,” Weston-Webb said. “Congrats to Tyler because she’s been ripping as well. I’m definitely looking forward to Hawaii this season because I’m so comfortable there and it’s been four months that I’ve been away from home.”

Sage Erickson (USA), 24, couldn’t find the right waves in a shifting lineup in Semifinal No. 1 and placed equal third. Erickson had an exciting campaign in France up until the semis and previously dispatched World No.4 Lakey Peterson (USA) and reigning 6-time WSL Champion Stephanie Gilmore (AUS). The Californian nets her season-best result so far and will look to keep her momentum going into the final event in Maui newly ranked at No. 16.

“This is a match for my best result on the Championship Tour as a third, and even though this is by far my best result this year I’m very disappointed,” Erickson said. “That was a huge missed opportunity, the conditions were really funky, that’s known here in France with the tide it shifts and switches and you have to adapt to that. I was trying to paddle past the rip that’s going through the lineup and I couldn’t. ”

In the second Semifinal, new Jeep rankings leader Carissa Moore (HAW), 23, had a shocker performance, only able to find two average waves and minimal scores. Despite this Moore was one of the form surfers of the Roxy Pro France and will carry her excellent rhythm into Maui for the World Title showdown. 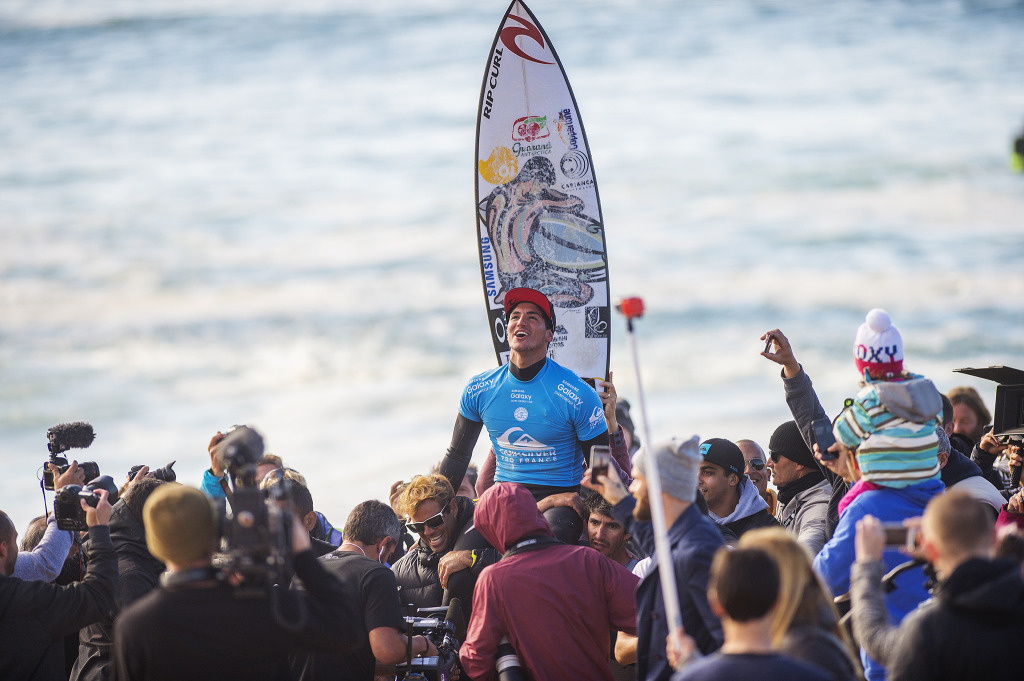 The next stop on the 2015 Samsung Galaxy WSL Championship Tour for the men will be the Moche Rip Curl Pro Portugal from October 20 – 31, 2015 while the women will culminate their season with the Target Maui Pro from November 21 – December 4, 2015.

Highlights from the Quiksilver and Roxy Pro France will be available at worldsurfleague.com and via the WSL app.