Is Michael Oblowitz Surfing’s Most Controversial Director? From making a tell all film about surfing's most prolific drug smugglers, to staging a stunt that pissed off some of the North Shore heaviest characters, Oblowitz creates controversy wherever he goes...

The compelling documentary, which Stab went so far as to call ‘the best surf film ever made’ revealed the founding of G-Land, Mike Boyum’s legendary escapades and a drug trafficking sub-culture that more or less built the surf industry was too controversial for some of the people featured in it, and it never made general release.

I saw it as a jury member at the San Sebastian Surfilm Festibal in 2010, which it won easily. It went on the clean up at various surf film fests around the world, winning Best Documentary at SurferPoll, before getting iced.


The director, Michael Oblowitz, is a larger than life character with a directorial pedigree than includes makes movies with the likes of Val Kilmer and Steven Seagal, and making music videos for the likes of Clapton and Bowie. He followed up Sea of Darkness with an as-yet unfinished Sunny Garcia biopic that has been years in the making, before hitting headlines recently with Heavy Water, the story of Nathan Fletcher, which you can catch on our UK screening tour.

Your films tend to focus on the backstory, the heritage behind the personalities. Nathan’s story started way before he was born, was that lineage part of what appealed to you to make the film?

The surfing world at its core, and by that I mean places like the North Shore, Indonesia, San Clemente, places where it’s really been engaged for many years… So there’s been all sorts of ways surfers have had to finance their sport over the years, and it’s made for a very eccentric group of people. And at the forefront of that eccentric group are the Fletcher family, originally from San Clemente.

Aside from a compelling story, you need to have a relationship with the talent. Presumably more than just you both dig surfing?

Nathan’s a punk rocker, he’s not a hippie, that’s part of why we get on. He was one of the first freesurf soul surfer guys, like David Rastovich, but Nathan’s very different. That’s why we relate to each other because I come out of the punk rock era. I was at the 100 Club in London when the Sex Pistols played their first gig… that’s where I was hanging out. I think the Fletcher family, Sunny Garcia, Martin Daly, they love the sport, but they’re tough guys, they aren’t hippies in their approach to it.

The bomb drop from the heli, was that something Red Bull stipulated in order to be involved, that the film had to have some crazy stunt?

No not at all. I met Nathan at a party at the RVCA house on the North Shore back around 2010/11 I think, he was there with Bruce. They saw my movie, I off working with Sunny, I had the cameras, I got all this gear there and I said, hey, why don’t we shoot some interviews and stuff? Red Bull was not involved at all at that point, it was completely independently financed. We did those first interviews, and Nathan said, his one condition, his dream was to do this bomb drop into outer reef waves. He said “if you can find a way to make that happen, I’ll do the whole movie with you.” I had a relationship with Philippe Manderla at Red Bull from Sea of Darkness, and we cut a version out of Nathan’s stories, the interviews that Nathan and Bruce after Andy dying, about surfing Mavericks with Sion Milosky when he died. Those giant Cloudbreak sessions, Code Red at Teahupoo, the movie was kind of a tribute to their fallen brothers, Andy and Sion. 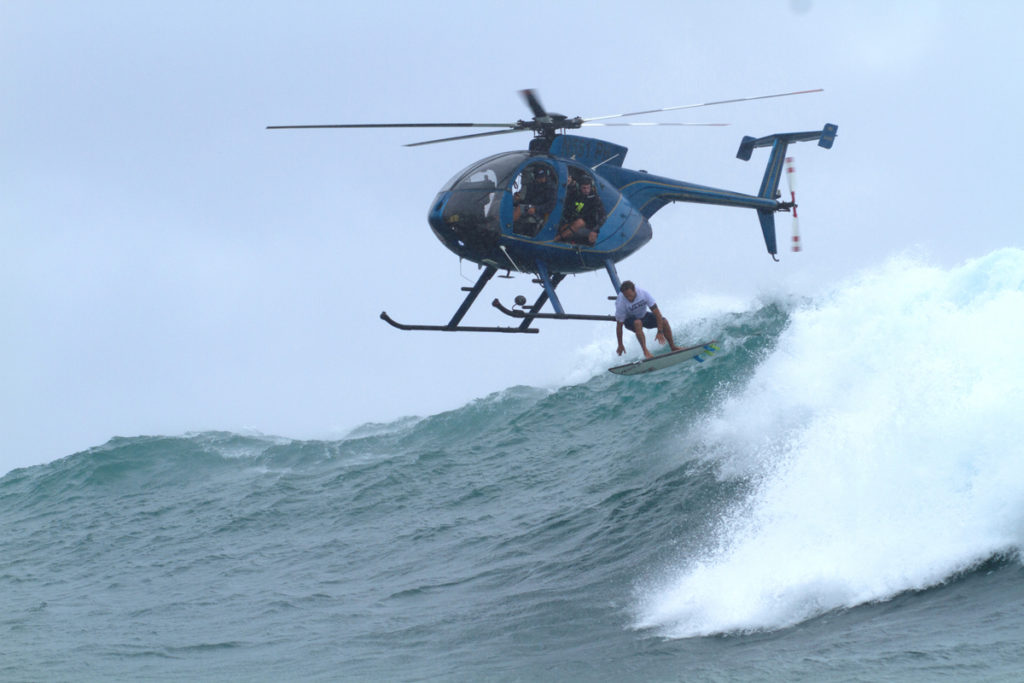 Controversy has tended to follow your filmmaking. Did some of the controversy from Sea of Darkness nearly derail Heavy Water?

There was a massive amount of controversy; nobody on the North Shore wanted to see anything about Sion. Because of Sea of Darkness, everyone thought it was just going to be about drugs and that I was going to go down that path with Andy and Sion, even though really, that was the furthest thing from my mind. That first version of the film got submitted and accepted at the San Sebastian Film Festival, the real film one, not the surf film festival, and received an incredible reaction, reviews and accolades. After that Red Bull said they’d come on board and finance the bomb drop, which had been Nathan’s dream from the very start. Then we just had to work out how to do it.

That must have been quite an undertaking? And not always well received in Hawaii?

Nobody had ever done it successfully before. Taj tried it and went right through his board. Before that, Ace Cool got dropped into the water after hanging off a heli on the outer reefs, but not into a wave. No one had done it successfully before, and nobody believed we could do it. We had an uproar on the North Shore. Eddie Rothman wasn’t happy because he thought I was going to crash the chopper into the water at Phantoms in his backyard. And a lot of the big time water safety guys in Hawaii said it couldn’t be done. However Rusty and Brian Keaulana said the only guy that could possibly do it would be Nathan, but it still took years to get a safety crew together as the water safety guys wouldn’t work with us and that led to not getting a permit. It was a pig fuck in a barnyard. It was not easy to get done. With that and the controversy with Sion, all hell was breaking loose, it was supposed to be easy, get in, get out and move on, but it became another crazy turn on the North Shore wheel, which I guess is just how it is.


But in the end you managed to pull it off. How?

By the time we did it, it was the end of the season and everything that could go wrong did go wrong. There was wind, rain, lightening, it was insane. At one stage Nathan hit his head on the skid of the chopper and we thought he was dead, it was freaky shit. The only prerequisite Red Bull had was that we have one camera get the whole thing from start to finish, that it was clear that it wasn’t a bunch of special effects, we had to show it was done real. We got that on the helmet on the GoPro Rush Randle was wearing hanging out the side door of the chopper. It’s 100% real, there’s no bullshit. It took a lot to get it, and it was fucking dangerous, I’ll tell you that much. There’s a great line that Nathan says, “Shit, if I get cheese grated, everybody’s going down.”

Join us for a screening of Heavy Water in London, Exeter, Bristol, Newquay, Newcastle, Edinburgh.