Home » A Million Miles From The WSL; The Joys Of A Remote Scottish Grom Comp

A Million Miles From The WSL; The Joys Of A Remote Scottish Grom Comp

For remote cold water surf communities, a good old fashioned grom comp is the perfect way to bring everyone together for an afternoon of revelry.

The first time someone told me about the microclimate around Scotland’s Moray Firth, I nodded doubtfully and smiled. A little corner where the rain rarely falls and the sun shines lazily on the old fishing villages that scatter the coastline. It sounded too good to be true.

Now, after countless hours spent in this special pocket of the North Sea, occasionally sunburnt and surprised by thinner neoprene, I’m convinced. Sandend, or Sanine to the locals, is one of the quiet villages benefiting from the microclimate and is the venue for the annual Sandend Grom Comp. 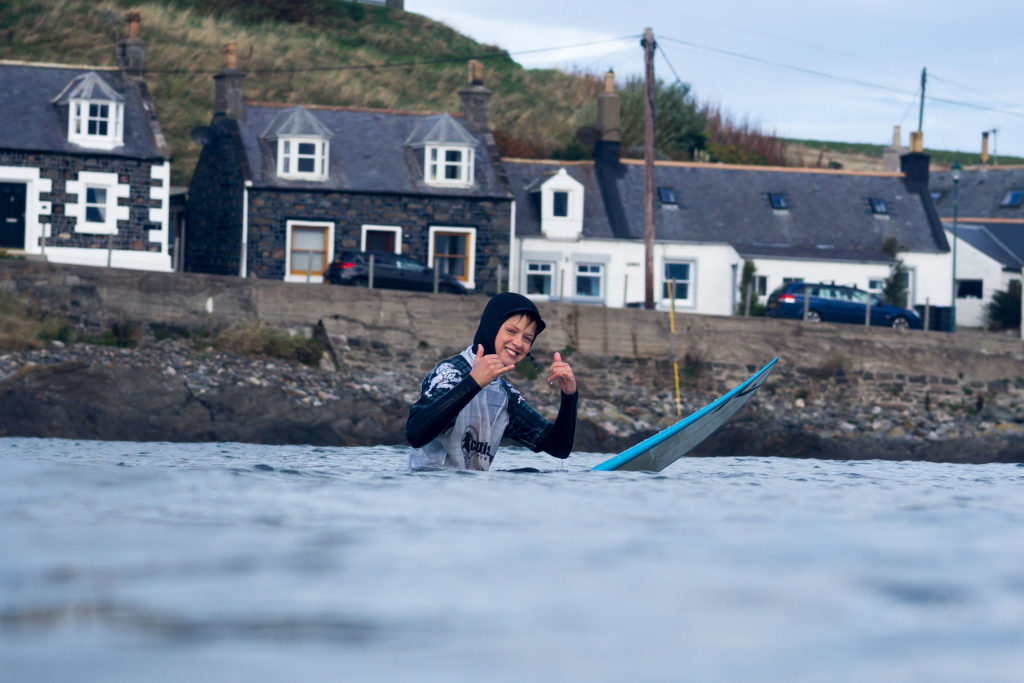 Its population of less than 300 swells in the summer months, or whenever the sea sends waves rolling into the bay. You know you’re in for a good session when you drive down Sandend’s only road from the top of the hill to the harbour, past the highland cattle and fishing cottages, and find the lines of vans and surf-mobiles. I found that same familiar energy as I arrived on the morning of the competition. The judge’s tent being set up, a barbecue being rolled down the road, a fire lit on the beach, the local surf school trailer opening for hires. Excited groms already in their wetsuits. 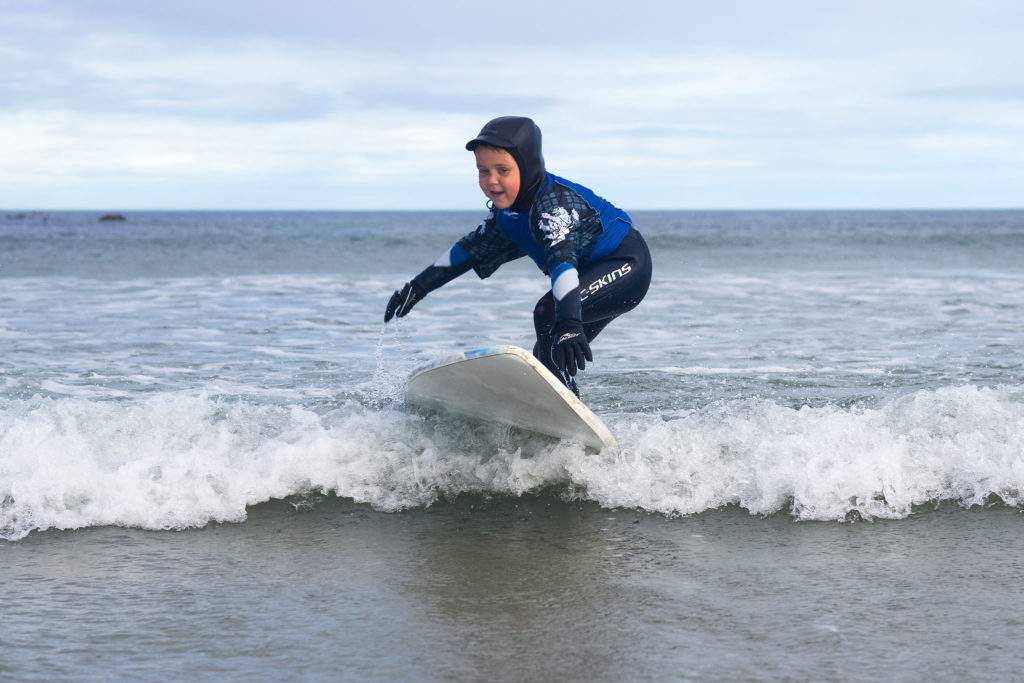 Surfing is still a small sport in Scotland, but it’s growing. Wetsuits are as good as they’ve ever been, and the next few years will see a Wavegarden built near Edinburgh. This year’s Grom Comp brought kids and their families from all over Scotland, some competing for the first time, some more experienced. Luckily then, the borderline surf forecast had tipped in the right direction and everyone was relieved to see the long period swell wrapping into the bay. Nature smiled all day with fun grom-sized waves, light offshore wind, clear skies and sunshine, and a warmer than usual air temperature. It might have been fate. 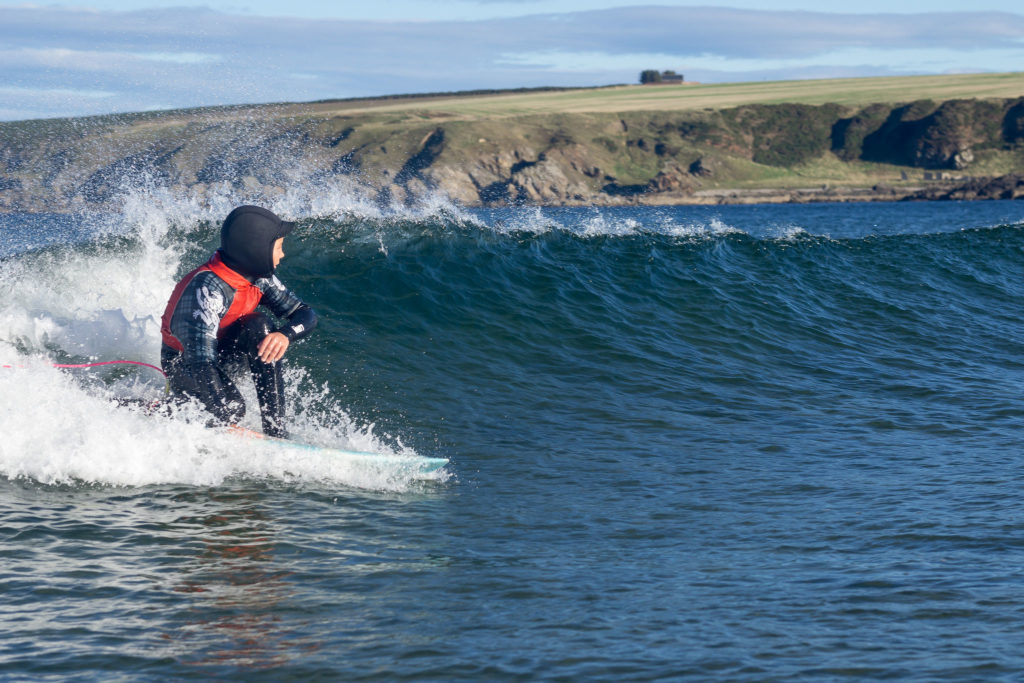 I spent the day in and out of the water, taking pictures, reluctantly accepting free food, and catching up with some familiar faces. The kids put us all to shame with their unlimited energy, many of them surfing in multiple heats and divisions throughout the day and sprinting around the beach between them. Seeing the next generation pushing themselves and each other in the water is something special. I was glad to play my small part in their day as I swam around trying to capture good waves and candid moments.

The light started to fade as the last heat came to an end, but not before a pod of dolphins cruised across the bay. Prizes were handed out and speeches were made, and there was a palpable sense of community as people lingered around the still-burning fire for a little longer. 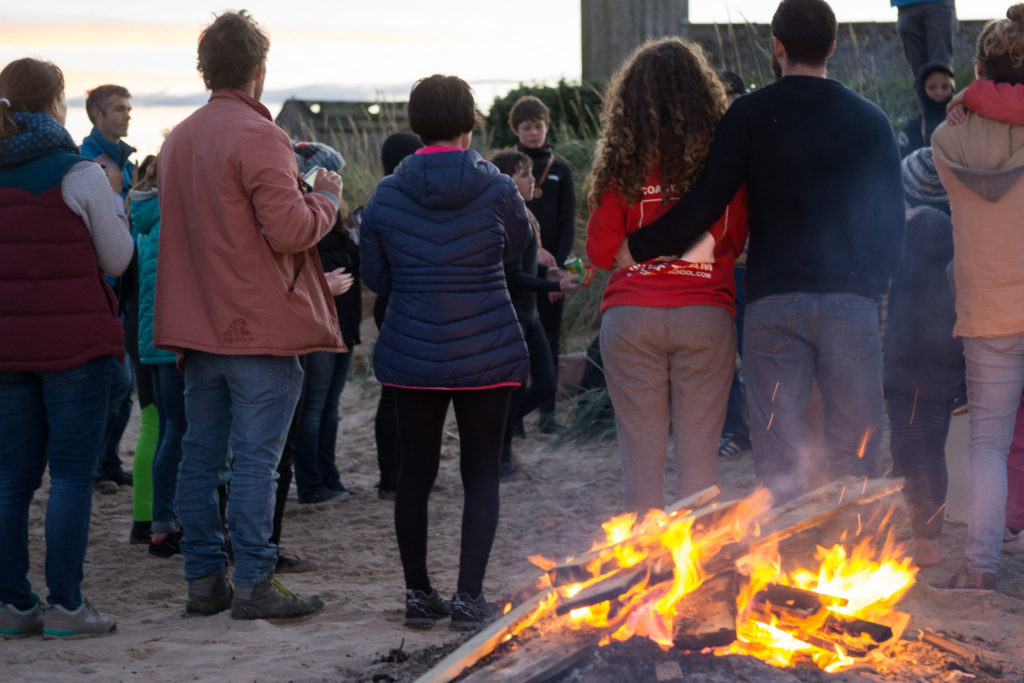 I drove home in the dark, reflecting on a memorable day. The hours of daylight are disappearing as winter approaches, but it doesn’t matter. The future of surfing in Scotland is bright. And, at least in Sandend, it’s pretty warm too. 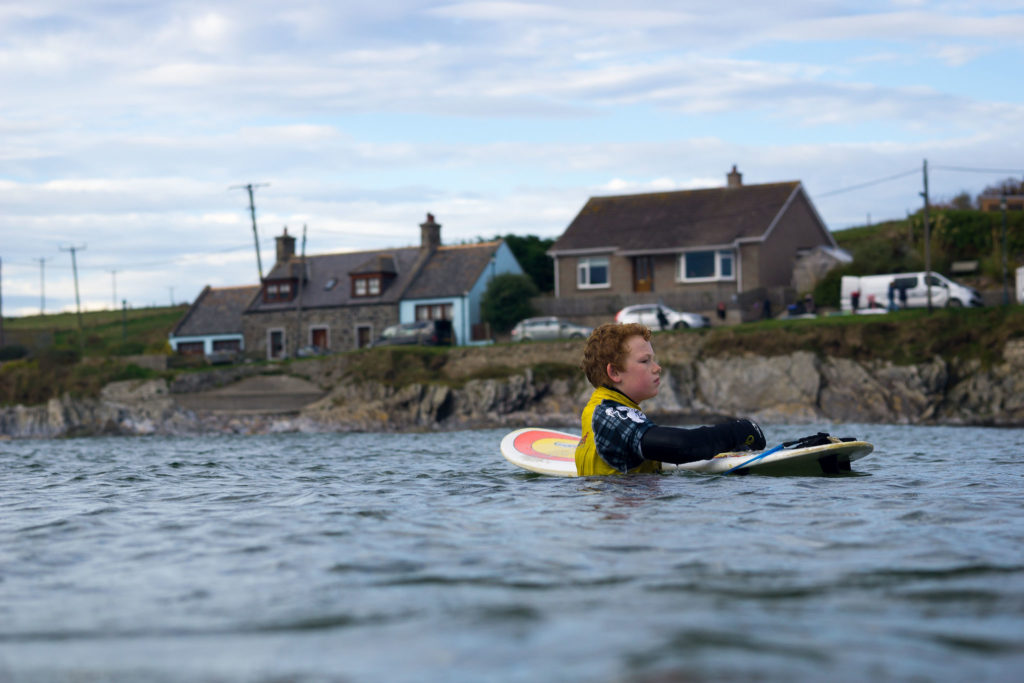 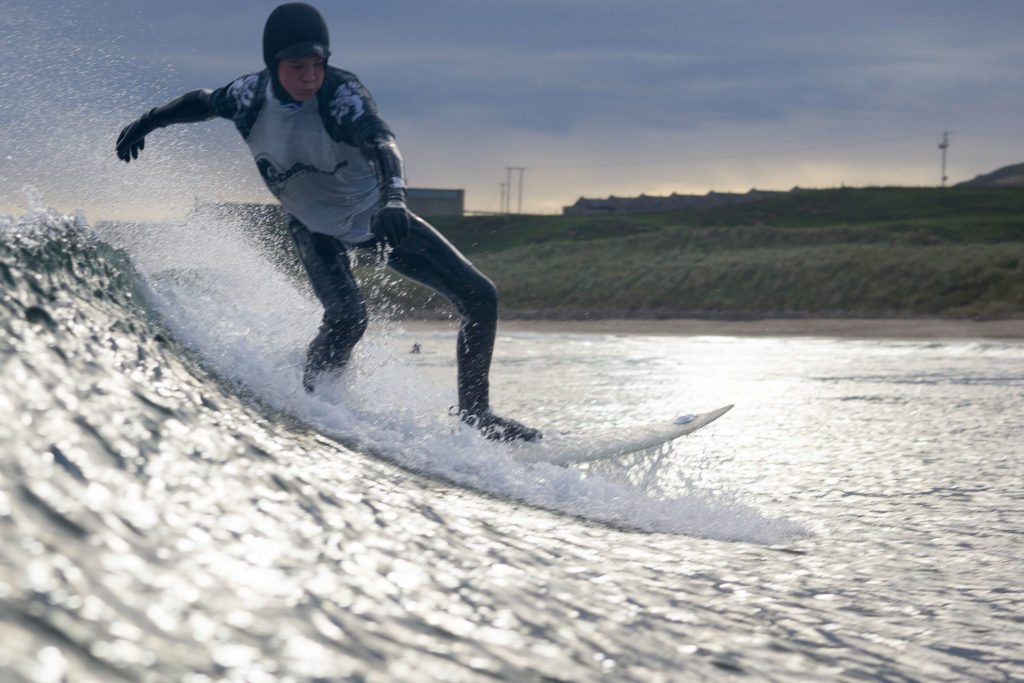 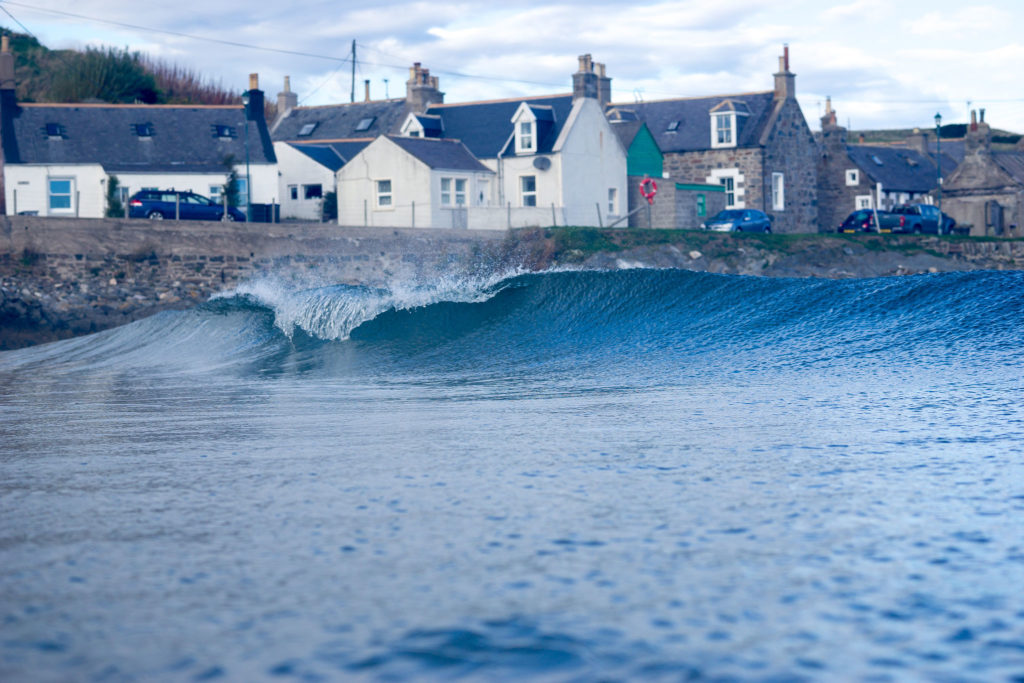 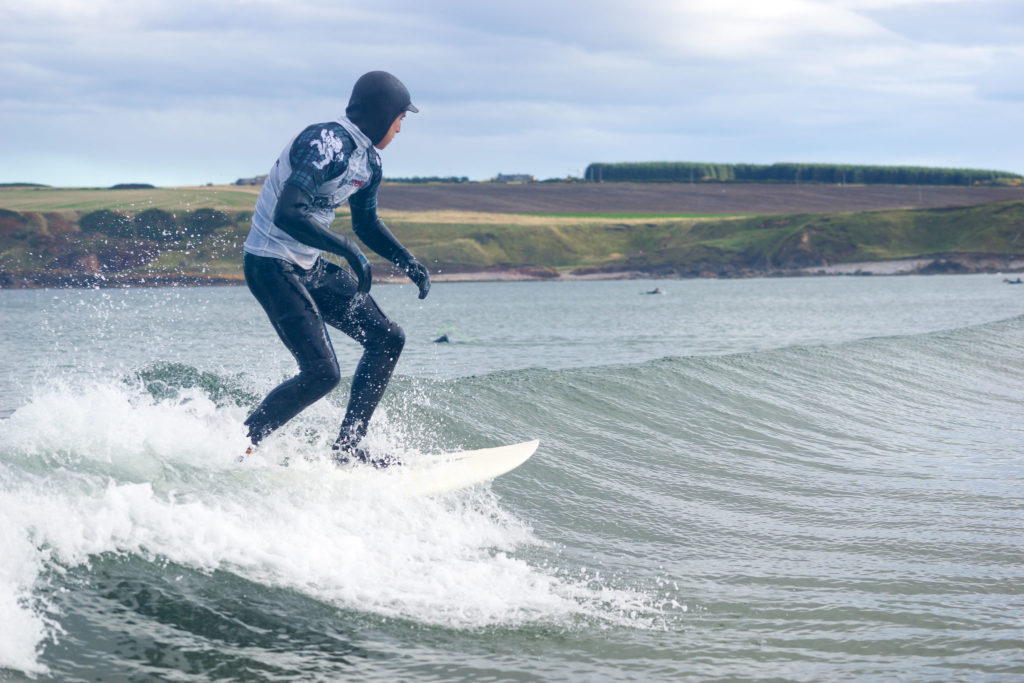 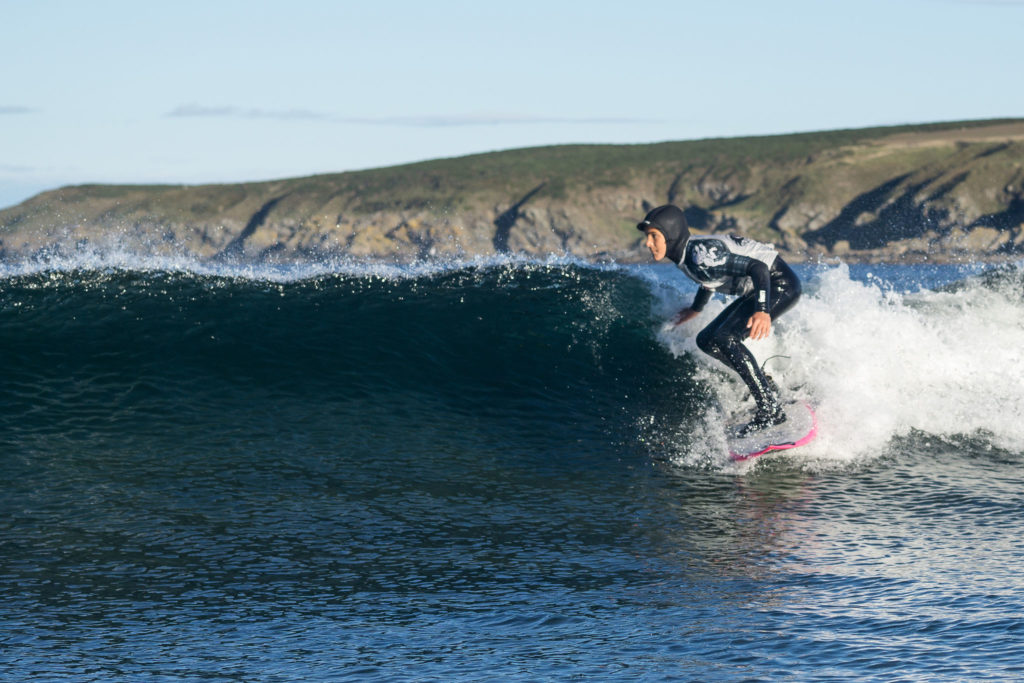 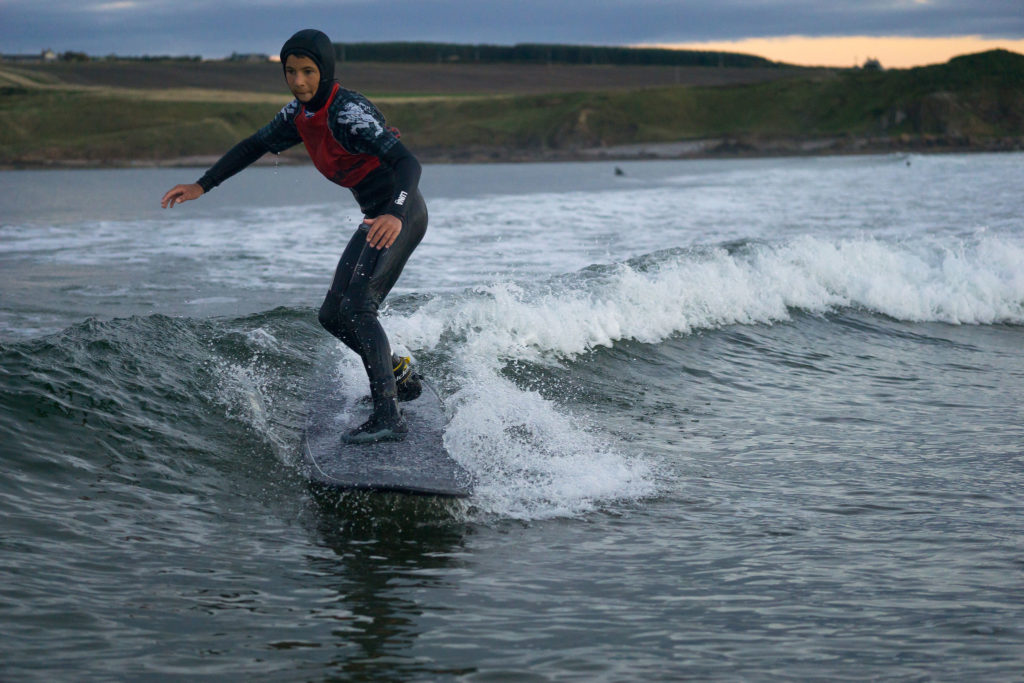 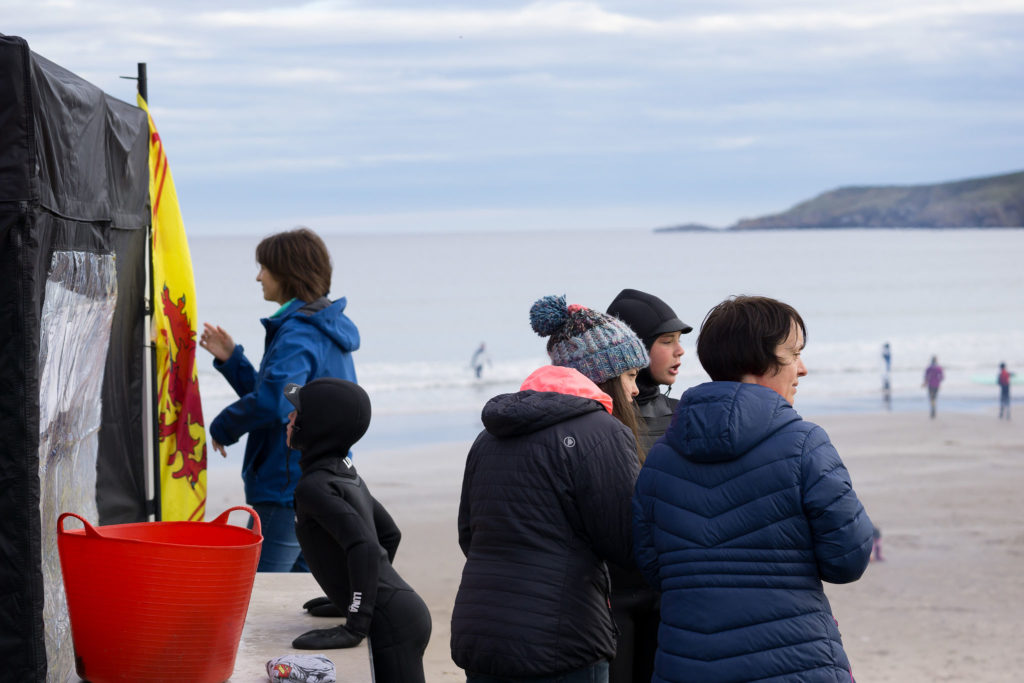 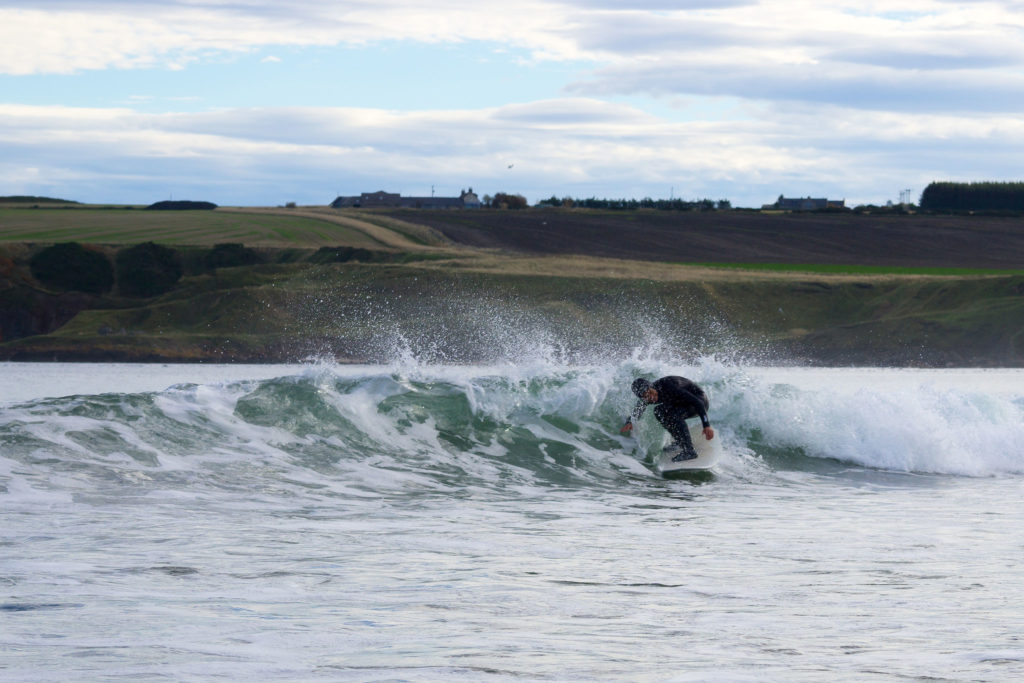 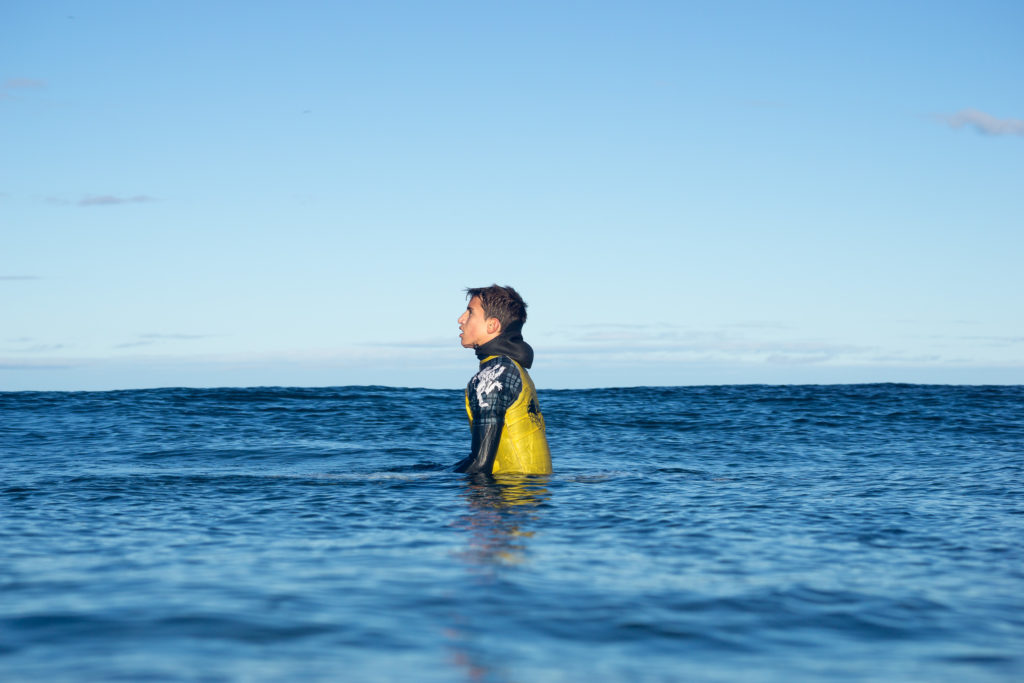 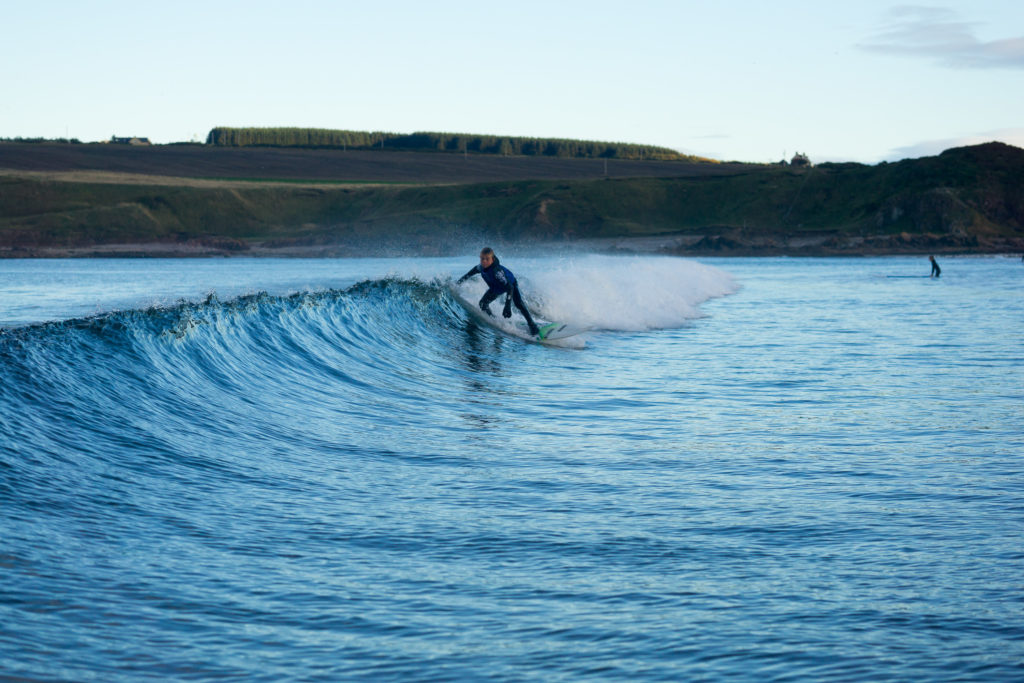 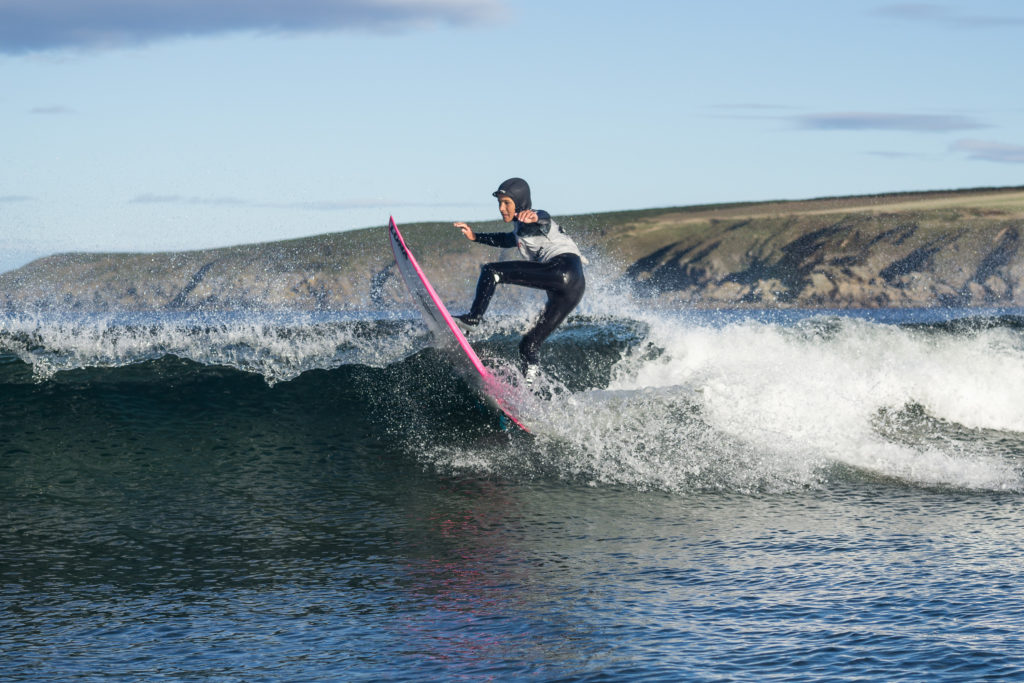 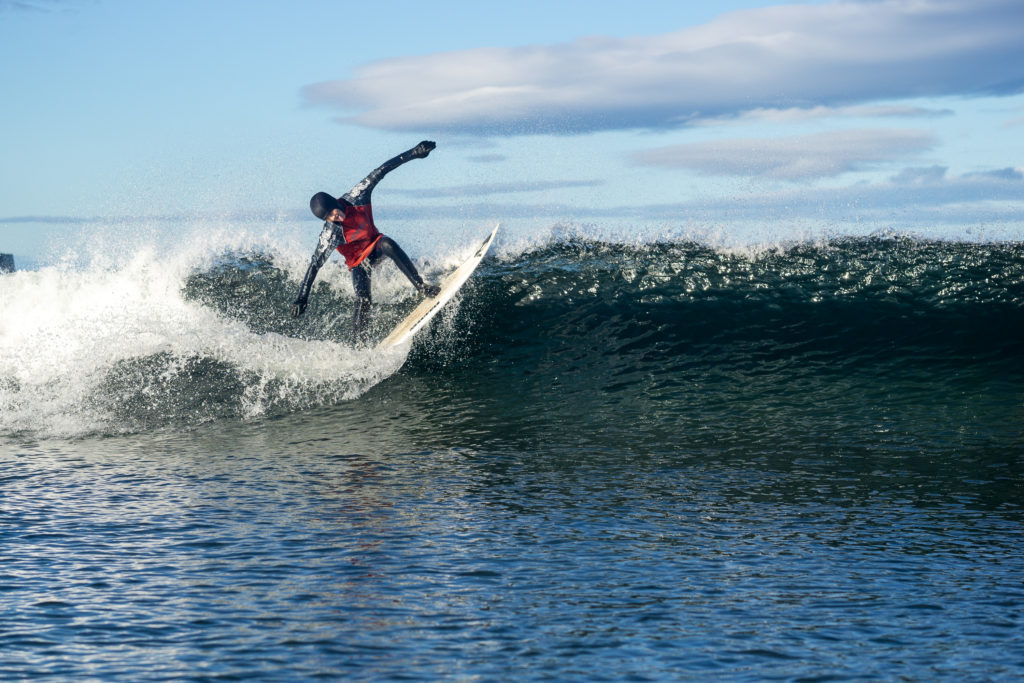 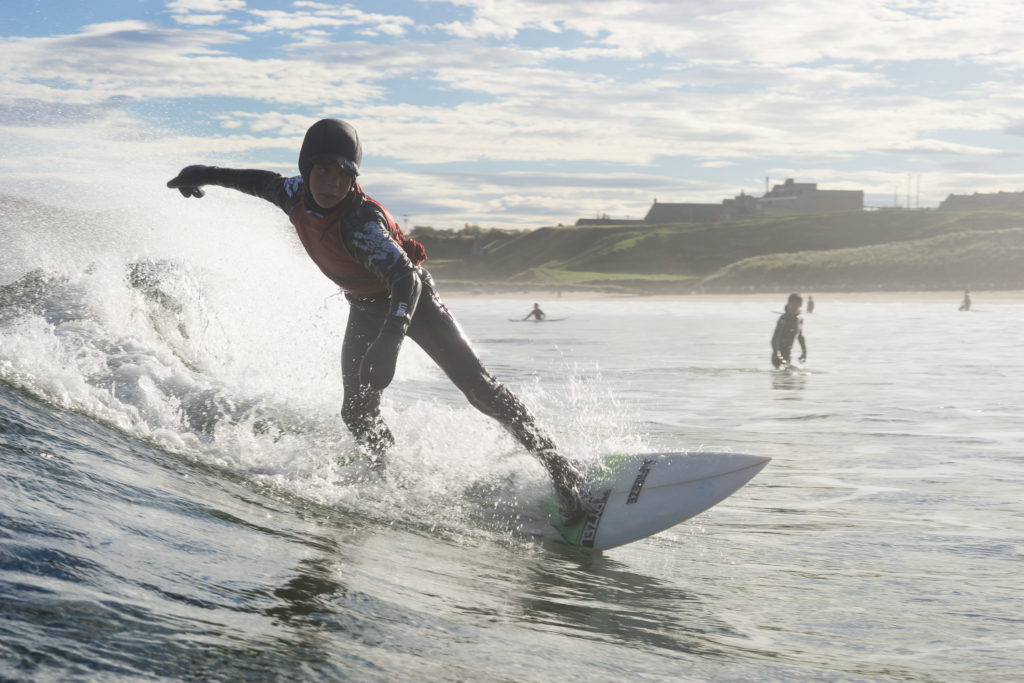 Huge thanks to Suds at Suds Surf School and Donald at New Wave Surf School for organising the event, as well as everyone else who volunteered their time. Thanks to Allyn Harper for a great video of the day. Results and more information available at the Scottish Surfing Federation website.

Words and images by Adam El-Naggar