Home » Moments From California’s Most Exciting Stretch Of Coast

Moments From California’s Most Exciting Stretch Of Coast

California has given birth to some of modern surf culture’s most enduring tropes and it seems the great state’s appeal remains as fervent as ever for the aspiring photographers and surfers lucky enough to call this cultural heartland home.

We recently caught up with up and coming photographer Braden Zischke, who’s been training his fine contemporary eye on Santa Cruz’s dramatic coastline for the last few years: 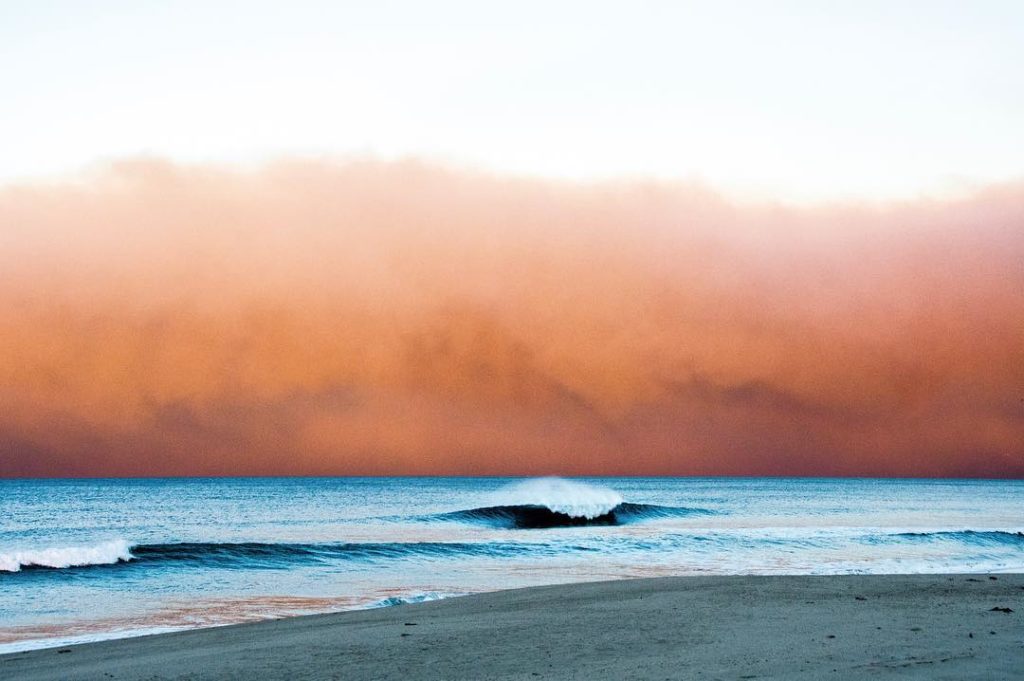 Who are you, how long have you been shooting surfing and how did you get into it?

My name is Braden Zischke, and I am an avid surfer and surf photographer from Santa Cruz, California. I first got hooked on surfing when I was twelve. I can vividly remember catching a wave on a sunny day at 38th avenue (a beginner surf spot in Santa Cruz), and thinking to myself…”wow, I get why people like surfing now.”

Surfing as a passion was a slow growth for me. My father is a devoted surfer who has traveled all around the world, but it took him a while to really get me hooked on the sport. I was a dedicated skateboarder before I started surfing, mostly because skating is less dependent on weather and the learning curve is easier.

I got my first surfboard for Christmas when I was around seven years old, but it required years of constant persistence from my dad to get me amped on surfing. The turning point was that wave at 38th avenue.

After that wave Istarted pestering my dad for rides to go surf rather than him needing to get me motivated.

Surf photography didn’t come along until about three years ago, which is about five years into my time as a regular surfer. My grandma does a lot of travel photography, and because of this I always had access to both photography gear and photography knowledge.

One day, I decided to figure out exactly how a DSLR camera differs from what I was used to using to take photos- my Iphone.

I was amazed by the juxtaposition between both the simplicity of camera settings- aperture, shutter speed, etc.- and the infinite amount of unique images that I could create. After that first introduction and research into a camera’s functionality, I was hooked!

Surfing is still my favourite thing to capture, and at least for now, I don’t foresee that changing. 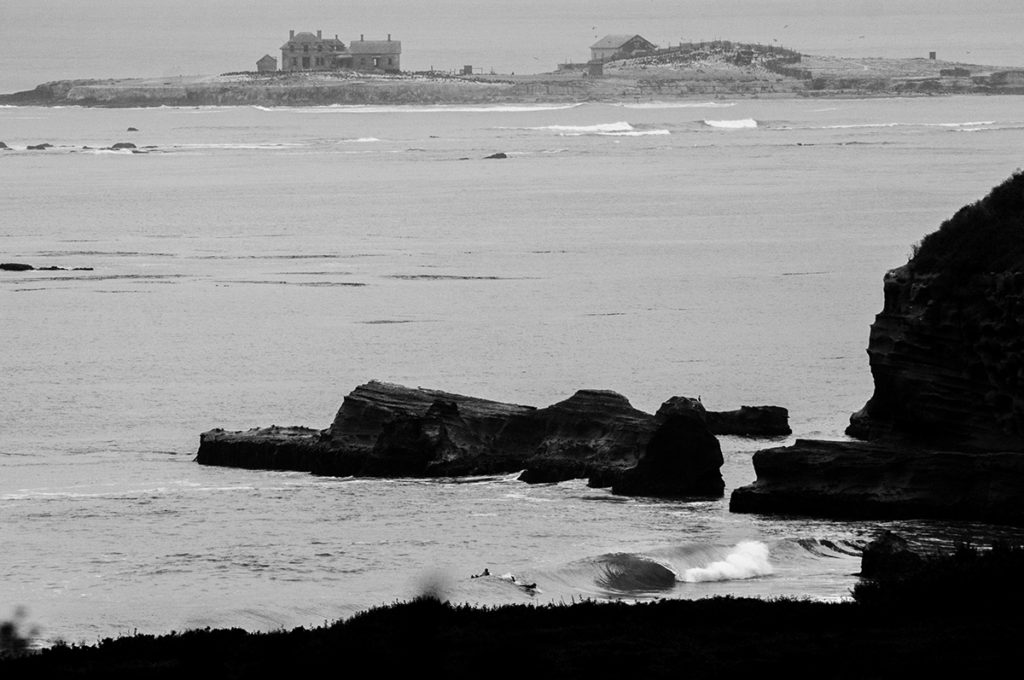 Tell me about the waves in Santa Cruz?

The untouched beauty that New Zealand contains is what fascinates me. I have never been one for crowds, and I think having adventure as an aspect in one’s surf excursions is often more important than the quality of surf one finds.

New Zealand has always given my that. In terms of shooting in California, Santa Cruz and its surrounding areas are so much more raw and interesting than anywhere else I have traveled in the state. The unrepressed power of its surf, the backdrops of its breaks, and the ability to find a wave for just yourself and friends to surf are what set it apart.

I live on the southern side of Santa Cruz county, which is littered with beach breaks that can turn world-class given the right combination of sand, swell, and wind. A bit further north, you arrive at what is colloquially known as East Side, Santa Cruz.

The waves here are beginner friendly for the most part, and are much more consistent because of lack of wind due to the shelter of cliffs and seaweed. Further north, you have the “West Side” and “Up North”. The surf here is a bit more exposed and therefore has a more raw feel.

Up North of Santa Cruz, especially, is where you can find big, powerful, and often uncrowded surf. It can sometimes be a bit of a goose-chase up there, but when it pays off and you score perfect, uncrowded surf- well, there is nothing better. 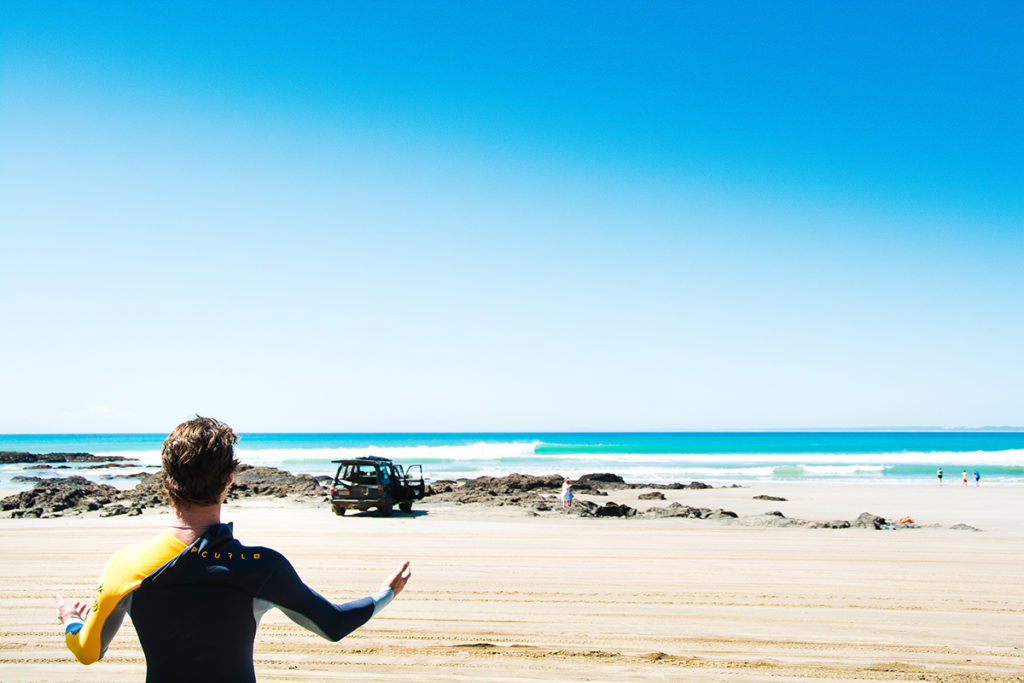 The surf community in Santa Cruz is very tight-knit. Many surfers I know kinda hang to their respective regions- southside, eastside, westside, etc.- but everyone is welcoming of one other for the most part. There are definitely some localized breaks in the region that you will get hassled for surfing or shooting at, but you can surf/shoot at most breaks if you practice proper surfing/shooting etiquette.

Some great surfers have come out of Santa Cruz- Noah Wegrich, Nat Young, Peter Mel, Richard Schmidt, & Adam Replogle to name a few- and this is largely due to the great community. There is tons of support being passed through the generations- especially right now with the creation of the Santa Cruz Boardriders Club- and the vibes are always high in water! 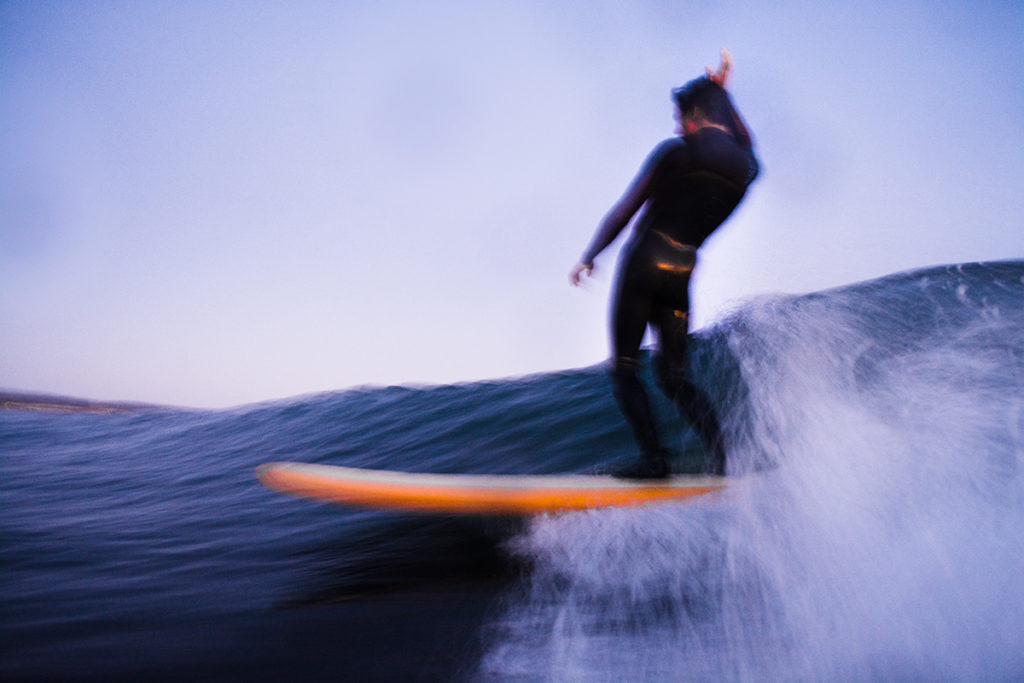 What is your favourite thing about shooting there?

I think you can get some really unique shots in Santa Cruz, especially if you know where to look. I’m going to school in Santa Barbara right now, and it is often hard to find unique breaks or angles to shoot because I’ve only been down here for a year.

You go to Sandspit on a big swell, and you will see twenty other photographers and videographers shooting the same shot. Knowing the ins and outs of the various breaks in Santa Cruz, as well as knowing my favorite angles to shoot, are both things that make Santa Cruz so enjoyable for me to photograph. 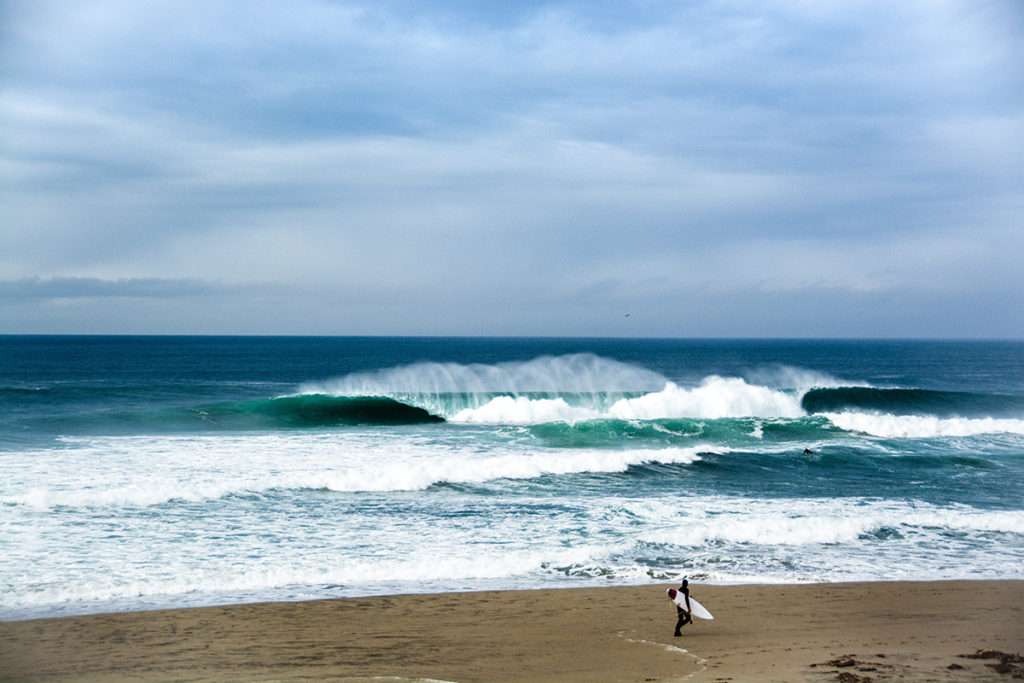 And what is your scariest or most memorable session?

I haven’t had a really scary session shooting- knock on wood. Sharks have always been a major fear of mine, but that’s all mental fear for the most part. Surfing, however, I have definitely had some scary sessions. It can get really big really fast in Santa Cruz.

I can recall surfing one of my favourite breaks a few years back on an increasing swell, and having the swell increase from 2 3 foot to pretty much closing out across all of Santa Cruz bay in a matter of thirty minutes. It was high tide, and the shore break at this spot can be deadly.

I was out with my brother and friend- both beginner surfers- and I was freaked trying to figure out how to get them in safely. Another surfer had to be rescued by a safety boat that day just down the beach.

The next day the swell dropped a bit and I got some great shots haha. It’s all give and take! 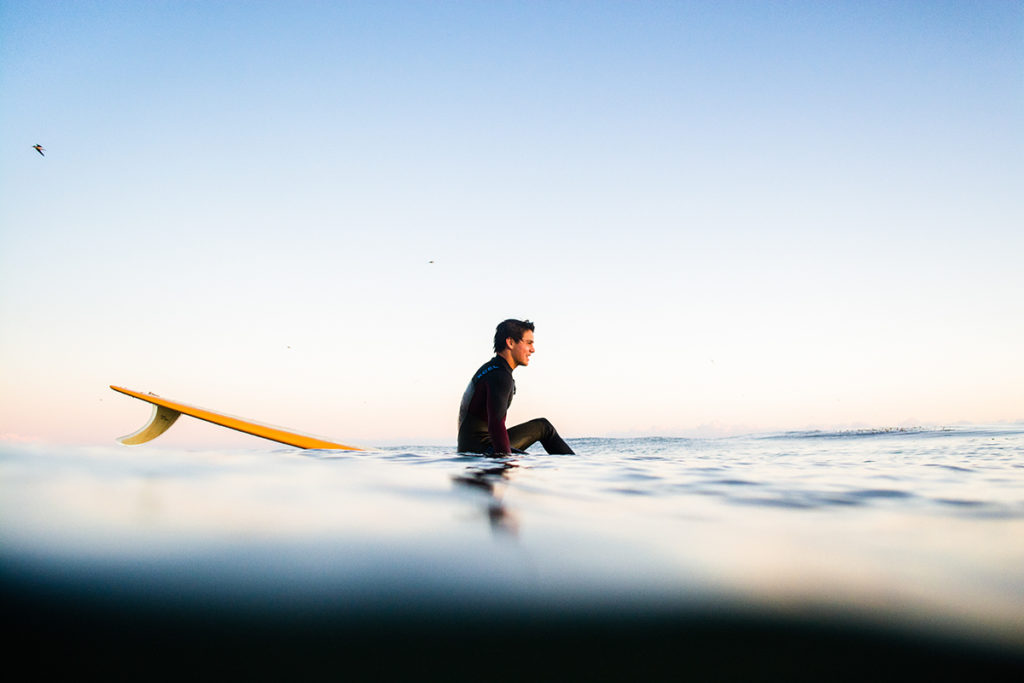 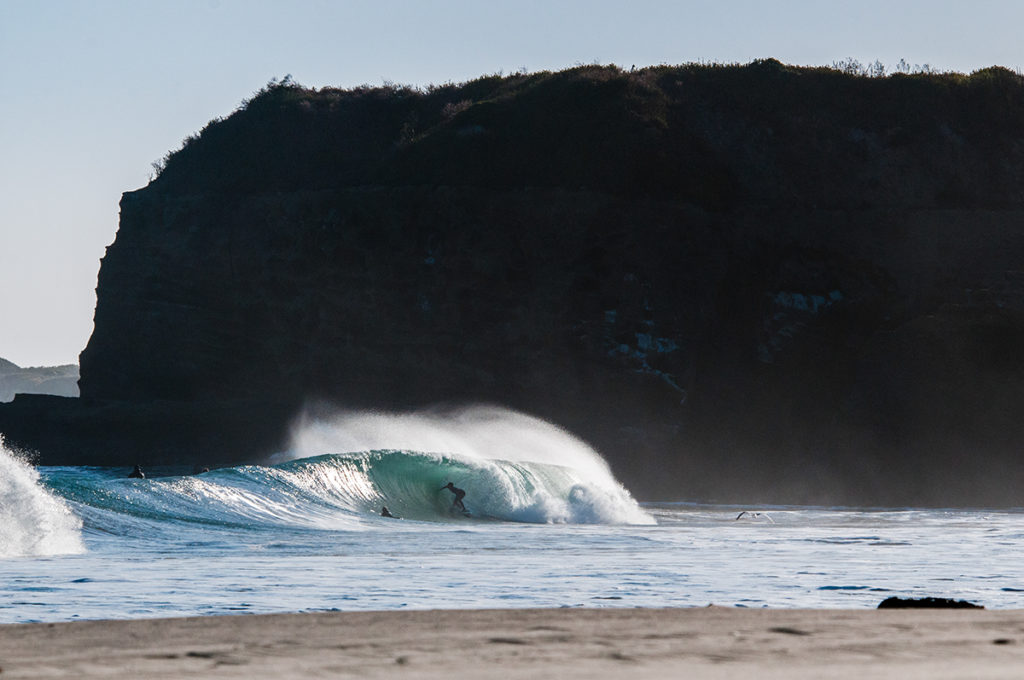 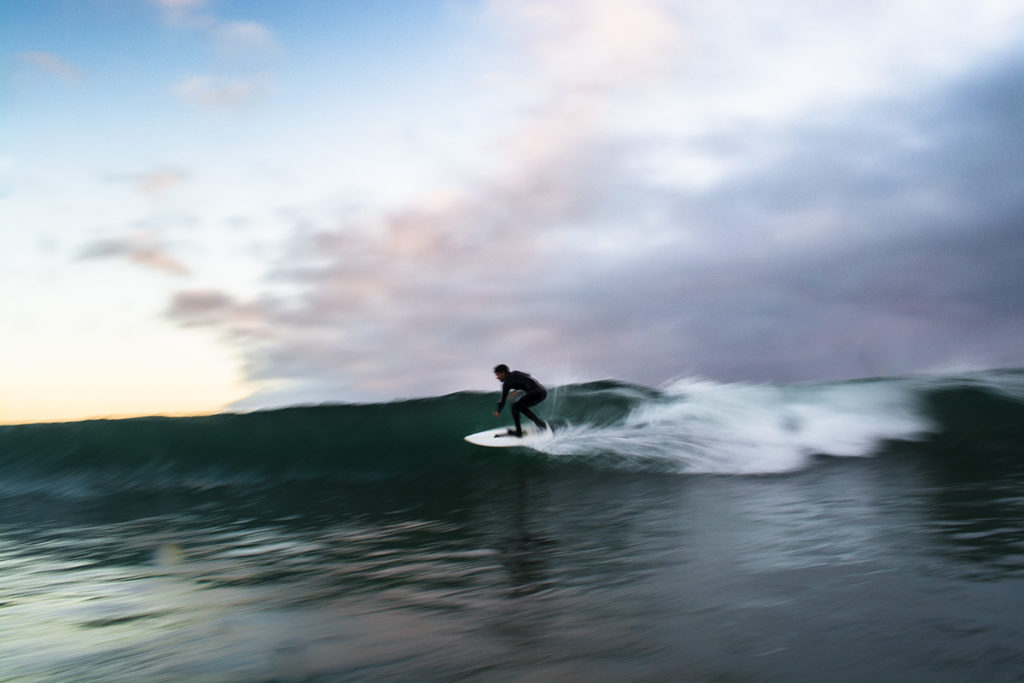 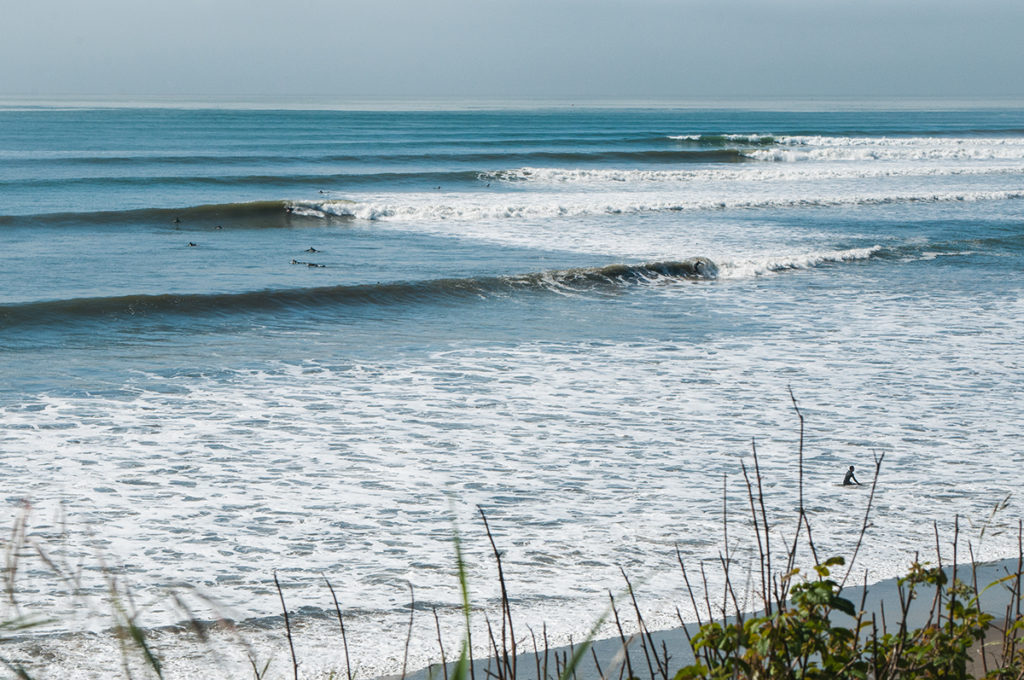 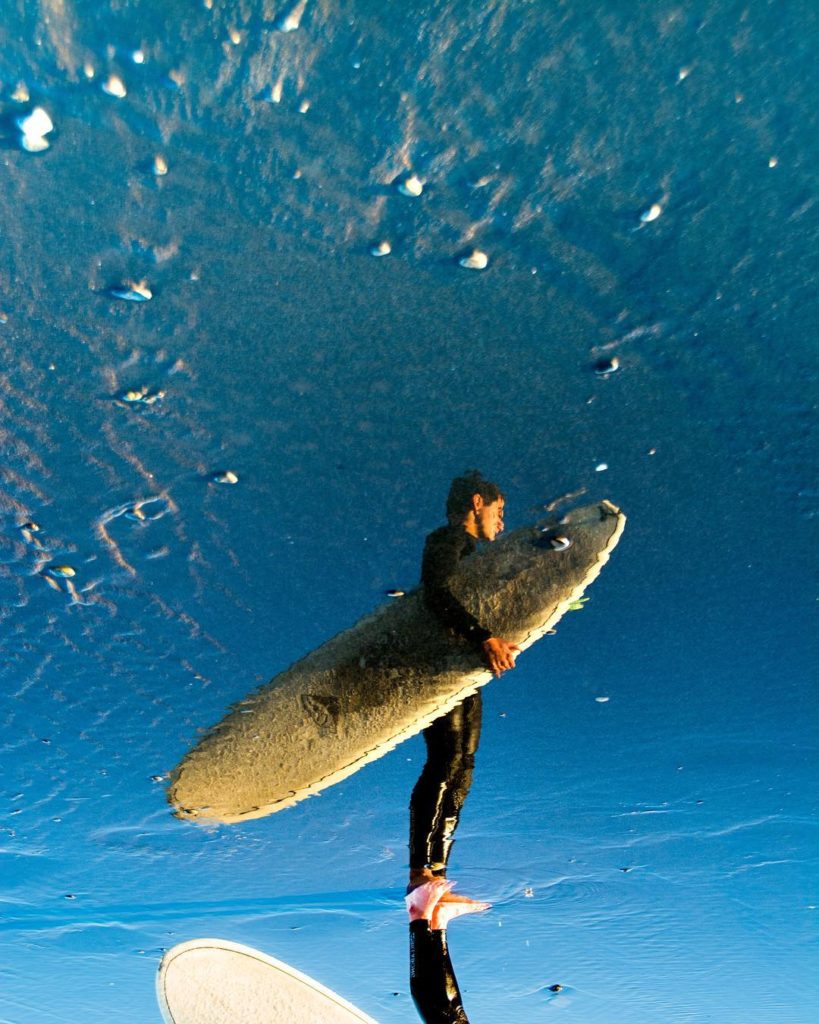 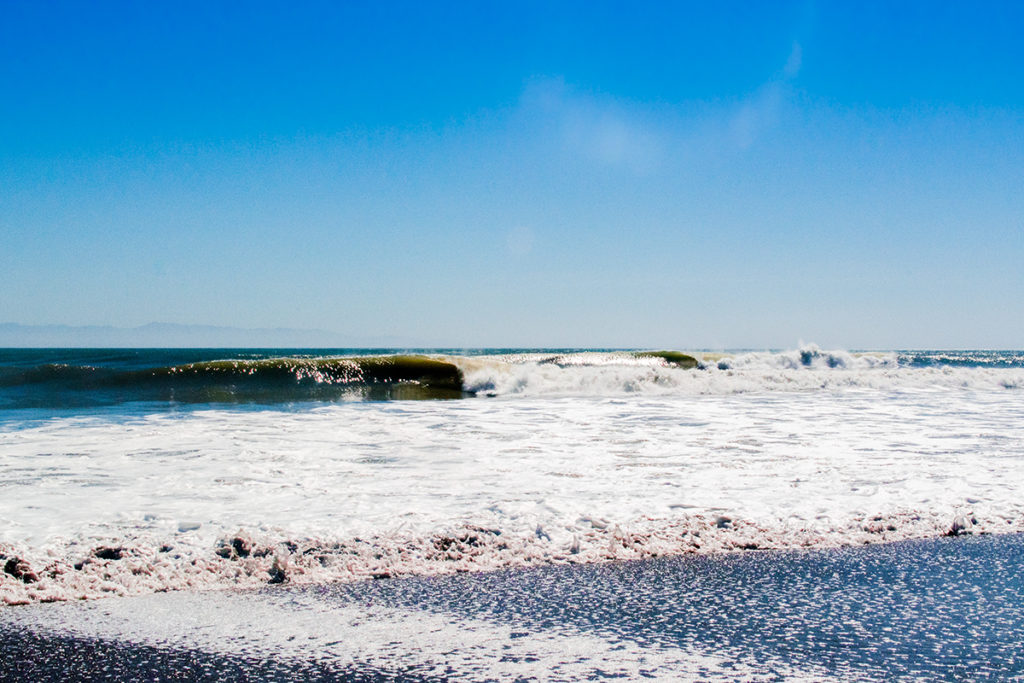 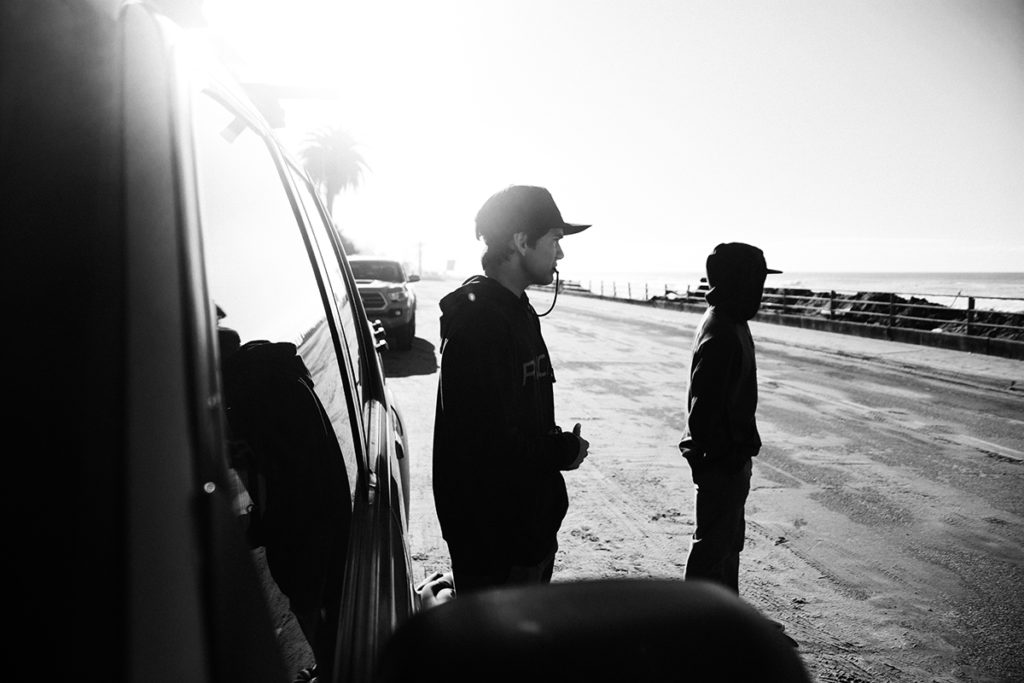 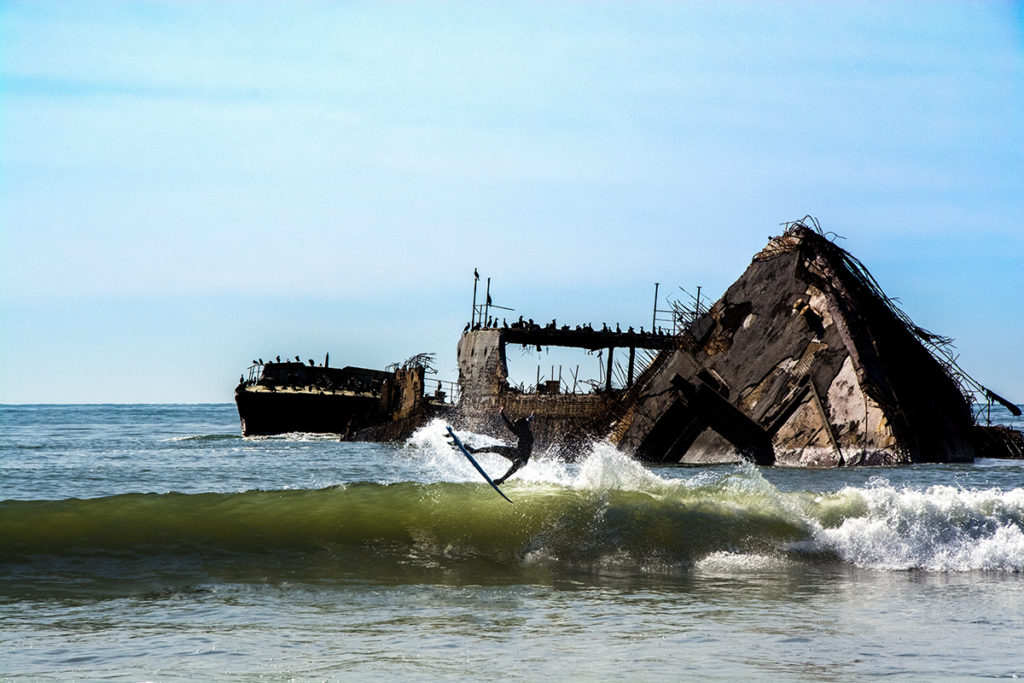 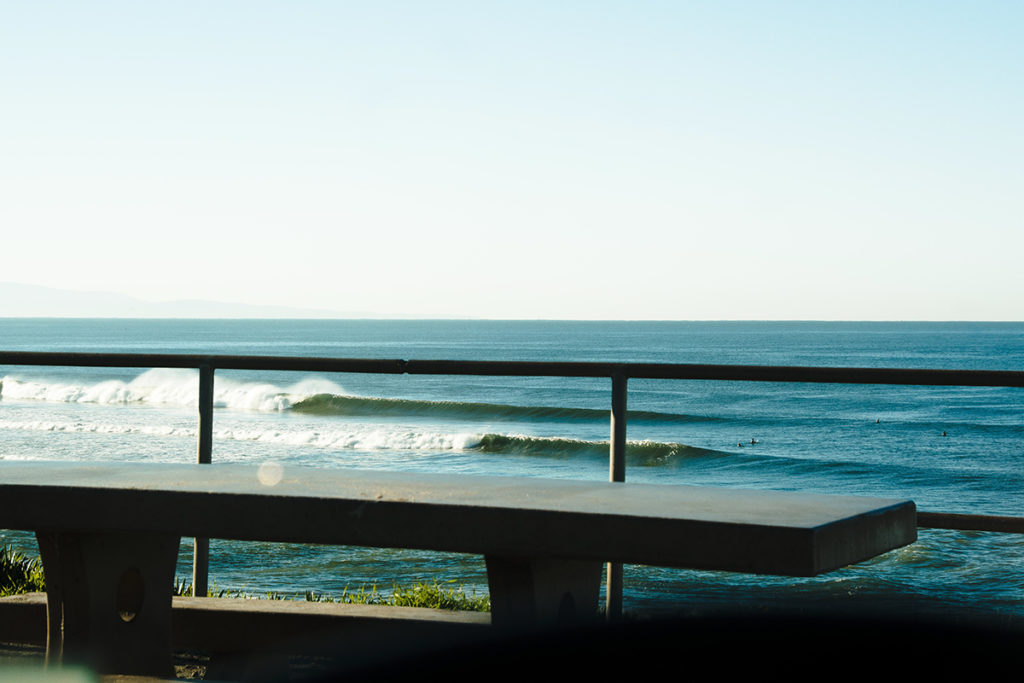 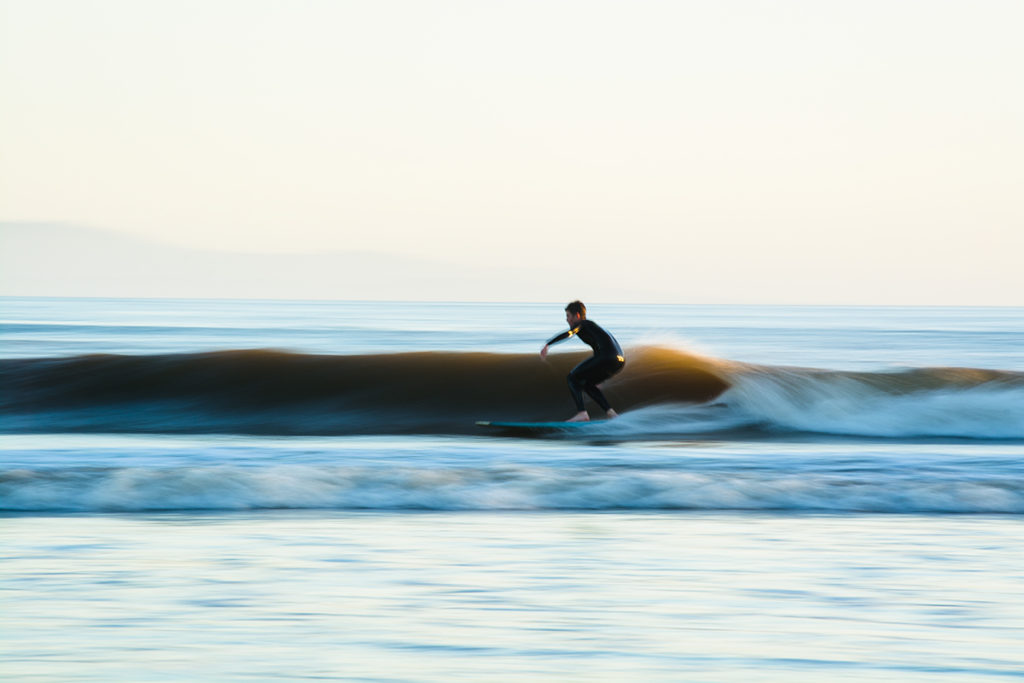 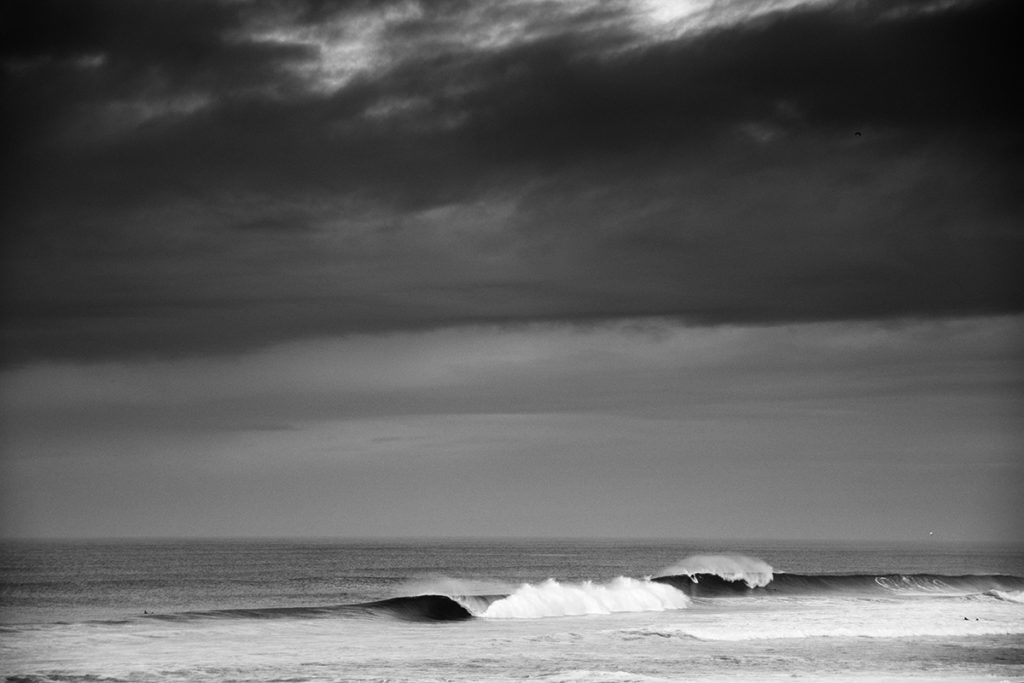 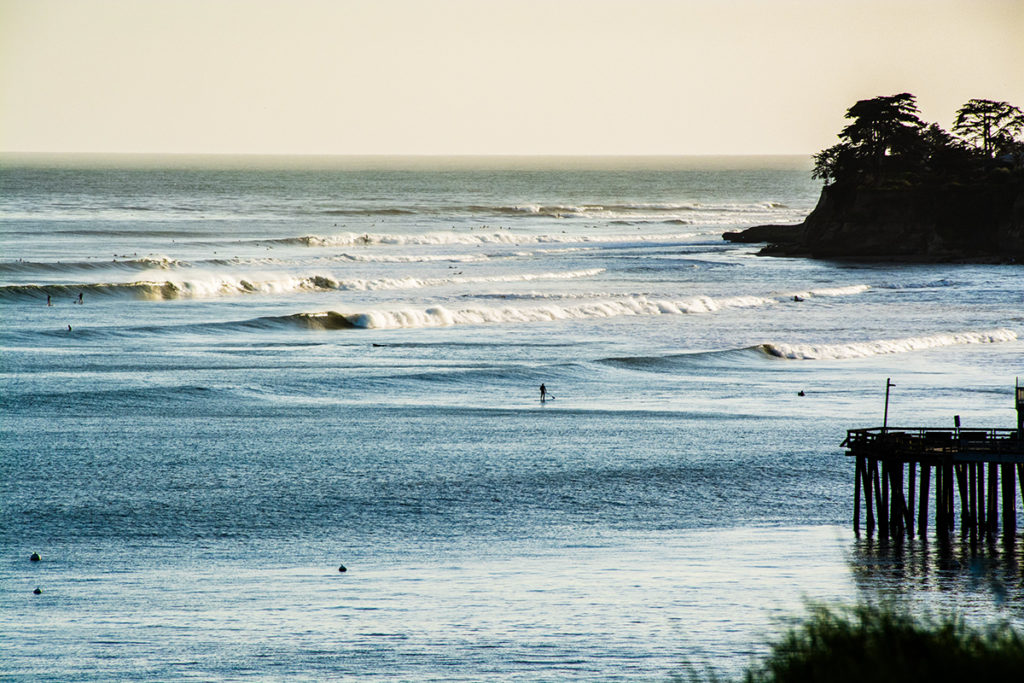 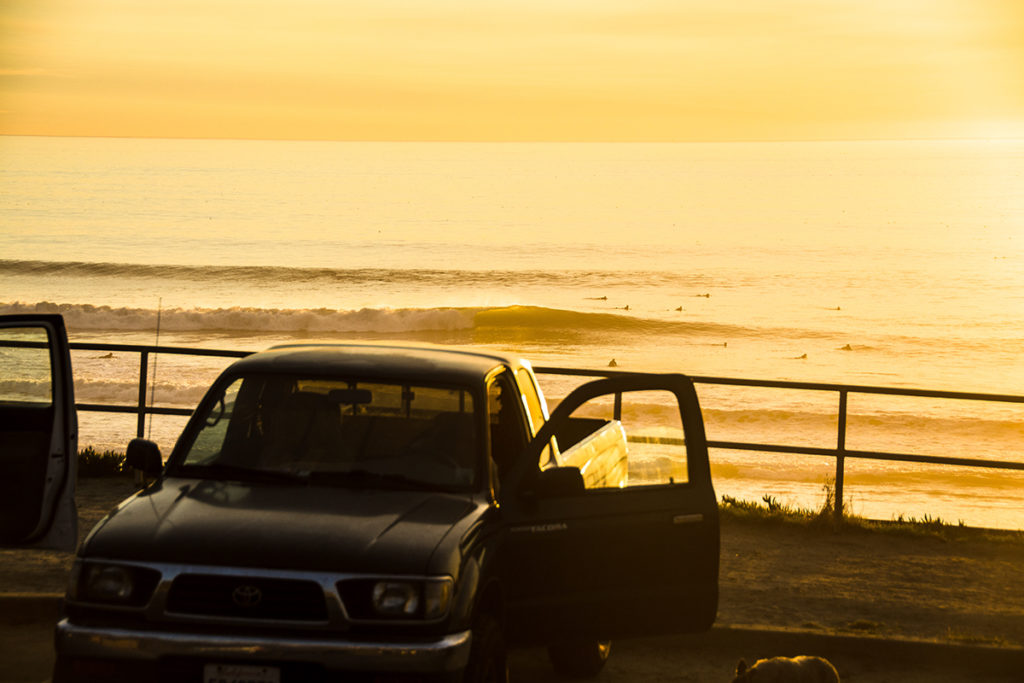