Introducing: Naomi Kobayashi – The Most Creative & Stylish Surfer You’ve Never Heard Of Don’t believe us? Watch these clips and get acquainted with the young Japanese maestro within.

In any given era there exists a strict set of consensus-driven guidelines about what is and isn’t good surfing.

In the early 60’s it was all about feet-together pocket rides and backbend hang tens. Then came the shortboard revolution, ushering in an era of crouched bottom turns and power carves. Then, the dawn of the ASP and the inception of rigid judging criteria, which brought in a focus on aggressive manoeuvres that spread like wildfire around the surfing world. By the early 90’s the creativity exemplified by the likes of Buttons, Bertlemann and Dora had been all but banished to a few peripheral enclaves. While, style stalwarts like Lopez, Curren and Machado kept smooth-lines alive in the formative years of the ASP, as the new millennium rolled around it seemed surfing, on the whole, was becoming flickier and increasingly homogenised. 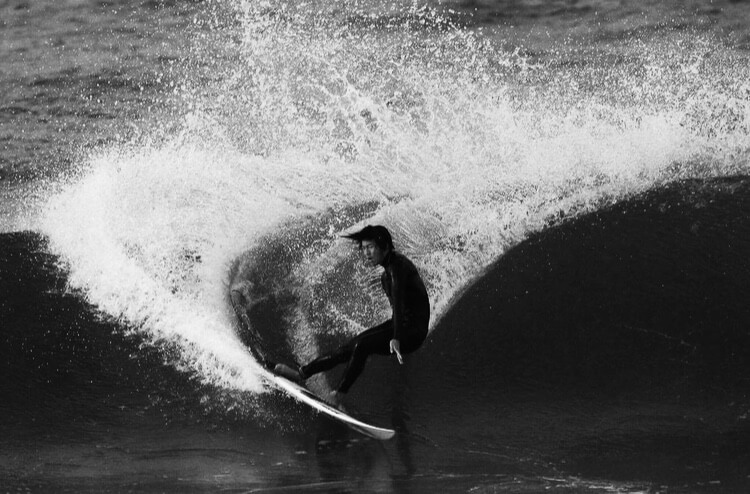 Then, in the mid to late naughties, a new movement burst into the global conscience. Lead by a crew of classically inspired Californian’s like Devon Howard, Alex Knost and later, Ryan Burch and born of a commitment to ride everything, this new collective would soon set about reviving and redefining what creative surfing looked like.

It soon spread across the pond where fellas likes Bryce Young, Harrison Roach and Torren Martyn were turning their backs on QS careers to take up the ride everything mantle, drawing new lines, rich with power and pizzazz in big and throaty surf.

In the interim years, this approach to surfing has spread around the world, picking up proponents everywhere from deepest Cornwall to the jungles of Java. Recently, we stumbled across one of its lesser-known adopters based way out in the land of the rising sun.

His name is Naomi Kobayashi and after watching a few of his clips, we decided to fire some quick questions at him to help you to become somewhat acquainted with what might be the most stylish and creative surfer you’ve never heard of. Can you tell me how you would define your approach to surfing in terms of craft and what you want to do on a wave?

I always like to draw beautiful lines because I like pleasant surfing. I want to get the energy of the waves and create speed and flow to dance on them.

I see you’ve competed in local QS events off and on for a few years, do you enjoy those comps? Is that something you plan to continue with?

Honestly, I’m not a guy who loves to compete. The reason is, I don’t feel comfortable hunting for waves and it’s hard dealing with other surfer’s emotions in the heat.

But the reason I’m continuing doing contests is there are a lot of my friends who only meet at the contests and surfing with them is a passion of mine. If I compare doing contests and shooting, I like shooting more and I think I’m better at it so I put my target more on that these days.

Has your approach to surfing changed and developed over time?

Actually, my focus on flow has not changed since I was younger. When I was in the junior division, my sponsor cared about the result, so I kinda had to surf harder like a QS surfer. But in those moments I felt like I was lying to myself by doing that. I thought, “This is not my style, this is not what I want to do with surfing”. As a result, I changed my mind and decided to surf my way and with my style.

Japan is known for its high-performance QS surfers, but are there other guys coming out of the country we should be getting excited about?

There are also many great heavy wave surfers in Japan. Many of them bet everything on the winter and go to the North Shore every year. Keito Matsuoka, for example, who gained a lot of respect for his 12pt ride at the backdoor shoutout this year. That gave me great excitement.

Tell me about your surf influences?

Railwork by Rob Machado and my favourite surfer is Craig Anderson. I met him in Indonesia once and he’s cool as a surfer and as a person. He’s my hero.

Now let’s watch the lad shred shall we?