Your very fave surf podcast is back for another rollicking instalment of surf mirth, another deep, explorative cavity search up wave-riding’s hindquarters.

Like firemen leaping to the aid of stricken comrades, they instantly stopped what they doing (creating world class surf journalism) and promptly slid down the slippery pole in the big red engine (Easyjet), to nobly deliver 14 consecutive days of outstanding live broadcasts to the surf world without making a fuss or demanding knighthoods.

But rather than neglect their vital podcast duties to you dear listener, when dusk fell they merely put down one mic and picked up another, bringing insight, humour, opinion and advice from a broad cast of colourful surf characters on the western facing facing shores of Portugal’s enchanting surf coast. 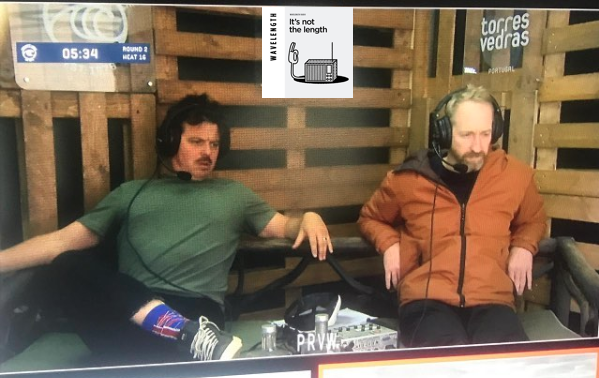 Nic von Rupp swung by to give the lads his thoughts of getting a WSL BWT wildcard for the coming season, and told the inside story behind those mad Mav’s lefts sessions this winter.

If you don’t heed Evans & Mondy’s calls to lobby the WSL to giving a BWT #WildcardForVonRupp then you need to ask yourselves if you’re really being the change you want to see.

Elsewhere, with Indo dry season coming into full schwing, the pod has been inundated with listeners asking advice on boat trips for the Ments.

Mondy wasted little time in getting hold of one of the most experienced surf guides in the Mentawais, Steve Sewell aka Soolly of the Huey via the Wavelength sat phone.

Soolly’s Indo’s & Indon’ts are vital listening for anyone planning a boat trip, and simply great content or anyone else who enjoys a candid chat with an Aussie seadog vet of a zillion tuberides with double pterygiums and a few tins in him.

But it’s not all about the best big wave chargers in the world pouring their hearts out or Ments legends giving free advice, ITNL cares deeply about all members of the tribe.

That’s why Evans & Mondy were good enough to give up their own spare time to go and mix with guests at Lapoint Surf Camp in Ericeira.

The assorted crew of English uni student and Scando stokers helped bring back the much loved Moan at Mondy feature, where Ben gives surfers a chance to air their grievances and offers non-judgmental advice in return.