Paul Duvignau is something of a renaissance man. The 25-year-old describes himself as a “shaper, surf coach, carpenter, multitask craftsman, cowboy, chippendale, whatever you want (laughs).” He’s also something of a throwback, a millennial with old school sensibilities. He rides big waves on self shaped guns, as well as horses, 80’s enduro motorbikes, and much between. He’s made a name for himself surfing big La Nord in Hossegor with a timeless style; as part of Vissla’s Creators and Innovators program in Europe, Paul’s hard charging, DIY craftsmanship and hat tips to the old ways seems like a great fit. We hit him up to find out more.

WL: Where did it all start?

PD: My dad took me surfing at the age of 2, summer ‘99. We used to hang out with an old shaper from Hossegor called Guitou, who inspired me for the future. His workshop was paradise, I remember hanging around all the boards, the dust, the smell of resin. That really opened my eyes, he seemed like a magician to me. I even cried one night when I was 10, wondering what we’d do the day he’s gone. My dad said “You should just learn from him, so then you can do it yourself.” 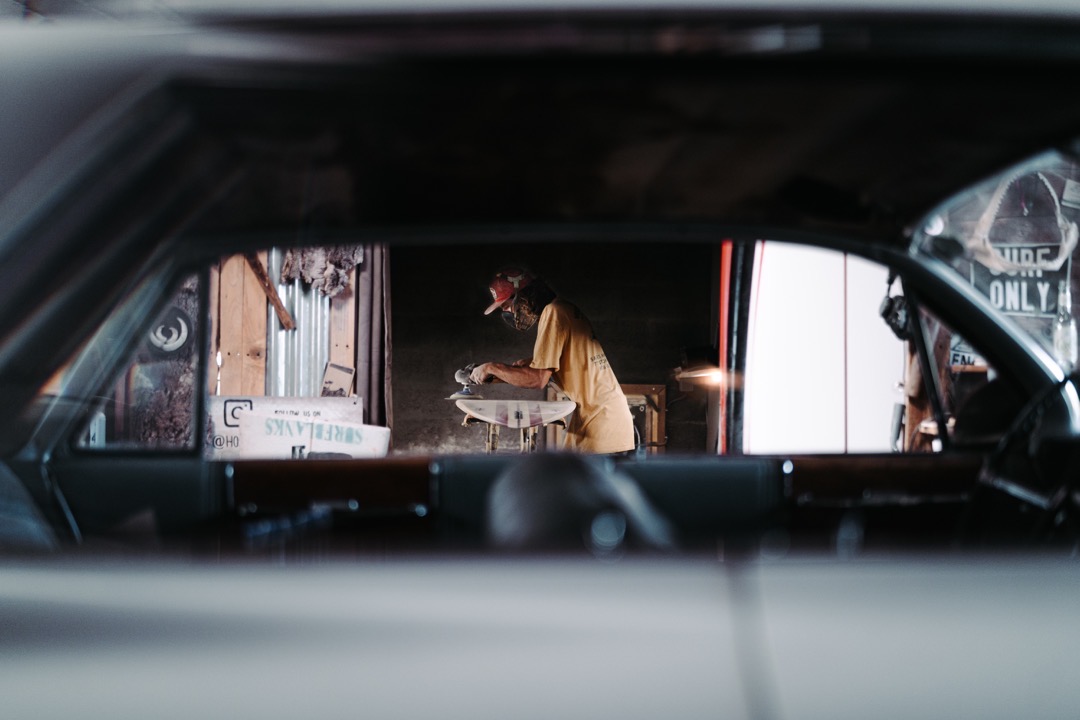 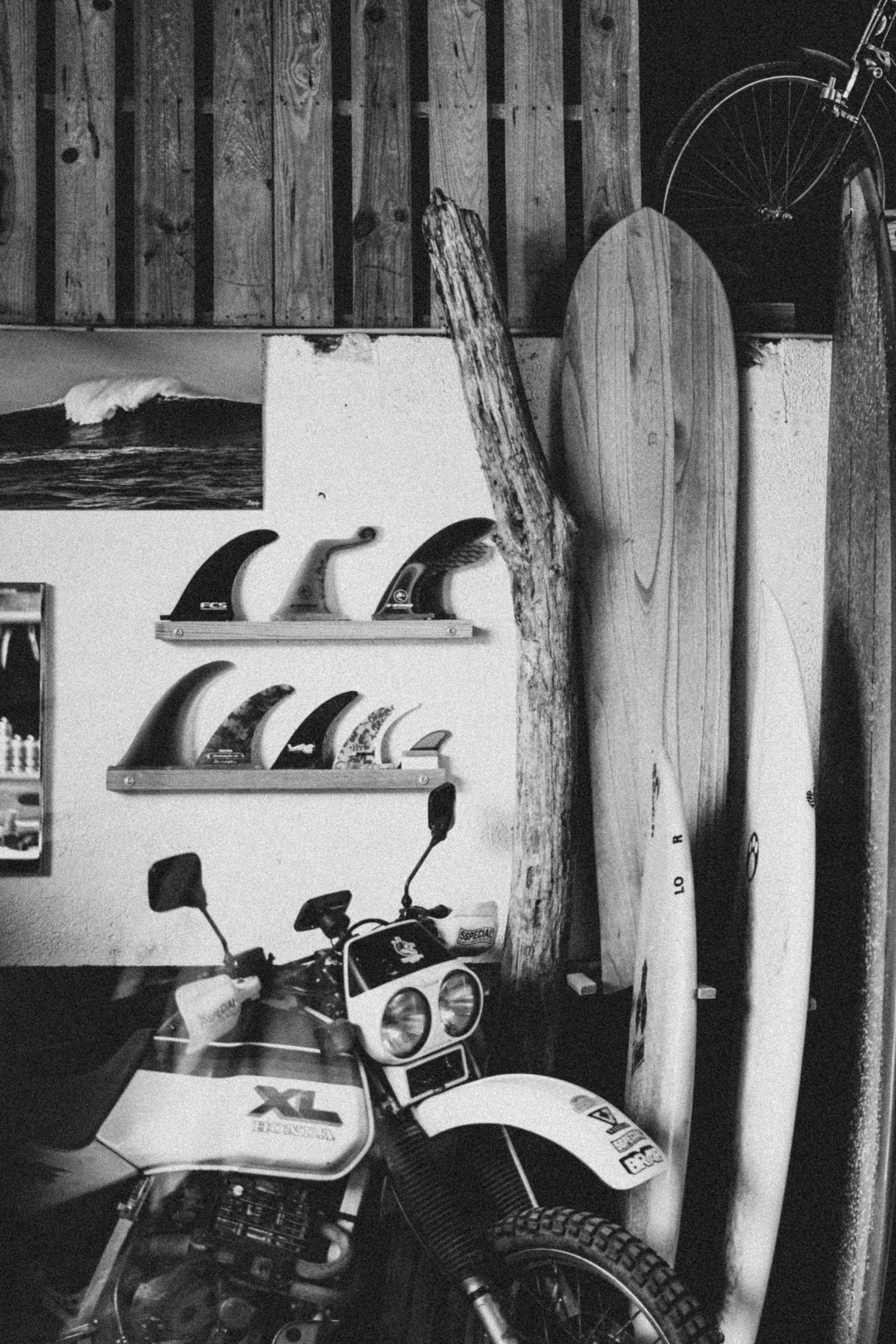 So then shaping started early?

At 13, I shaped my first alaia from a piece of wood in my backyard. At 15, I started doing longboard contests, so I asked Guitou to shape me a longboard, and also if I could watch him doing it so that I could then make my own. Two years later I ended up 2nd at the French Championships, and started improving my shaping and surfing together. I studied wooden house construction at school, and travelled every winter with the money I was making out of shaping and repairing boards to California, Hawaii, Australia… places that helped me grow my inner self by travelling alone, but also taught me about surf and shaping culture. 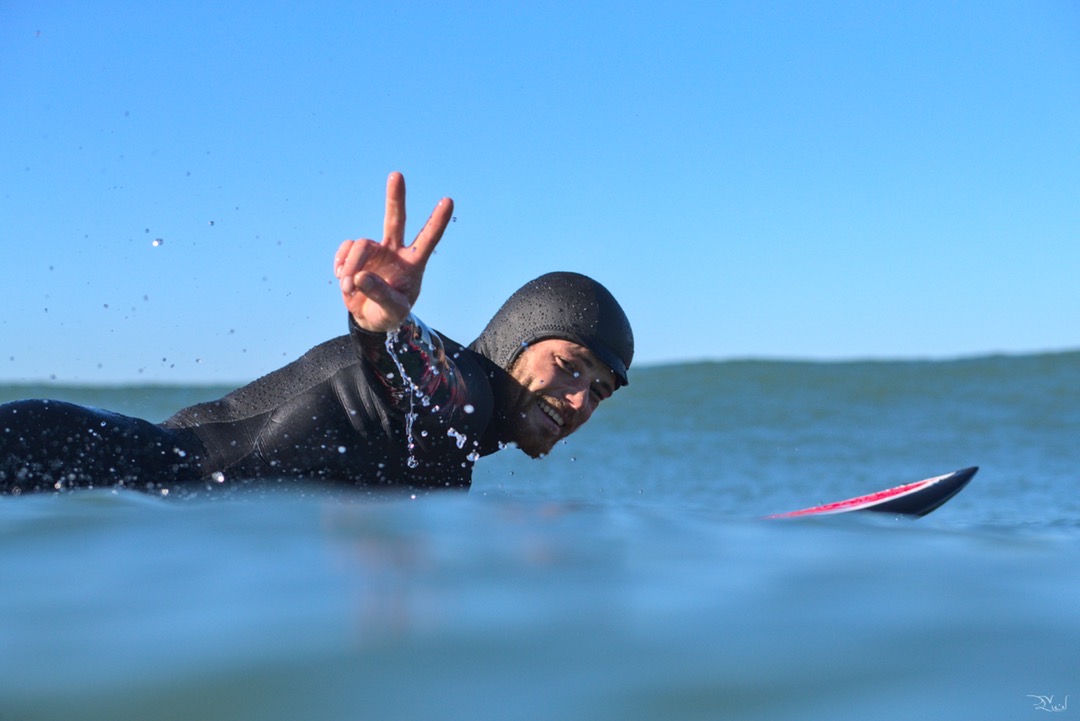 The stoke is real. Despite an eclectic range of extra-curricular, Paul is never happier than out among the cold, heavy water at the big wave break right in front of Hossegor’s Centrale square known as La Nord. Photo: @ln.hossegor40

Generally, the Hossegor area has been more of a sharp shortboard scene. How has your love for older styles and shapes fit in?

To be honest, being a teenage longboarder and shaper around here wasn’t easy, I had lots of critics among school and surf club friends, just because I was surfing different boards and not going out partying with everyone. It wasn’t the same overseas, there’s a big longboard culture in Australia and California. Things changed when I switched surf clubs to hang with the old guys at Lou Surfou in Seignosse, my dad’s the president of the club and all the older generation there were really supportive. But my friends still say I’m stuck in the past, because I love the old school stuff, fixing up old second hand broken things to use again.

You started pretty early at La Nord? Tell us about your relationship with the wave.

First time out there was when I was 10. I got smashed by the first set, almost had a two wave hold down, came up crying. My mum was furious that my dad took me there. I got back there a bit more prepared at 14, and step by step started to go bigger and bigger. We were a group of 4 young guns going together, me, the Barrieu brothers and Pierre Antoine Poncet. I was the youngest and always pushed by them to go bigger. The wave is really unpredictable, in the line up you have no time to talk with your friends, coz a sneaker set will come and boom, you’re smashed. What’s uncomfortable is that it takes you deep, and holds you deep for a long time. I’ve challenged myself to paddle Belharra, thought about going to Nazaré, but I’ve realised that what I love most is actually to be with my friends and enjoy 10-15ft La Nord surfing a gun I’ve made myself. This is the place I feel the most alive, on a freezing winter morning, watching the sunrise from the line up with a couple seabirds. My dad was the first person to surf La Nord on a bodyboard. He loves it too, it’s a family affair. He still surfs there on a gun I’ve made for him, and he organises the La Nord Challenge every year. 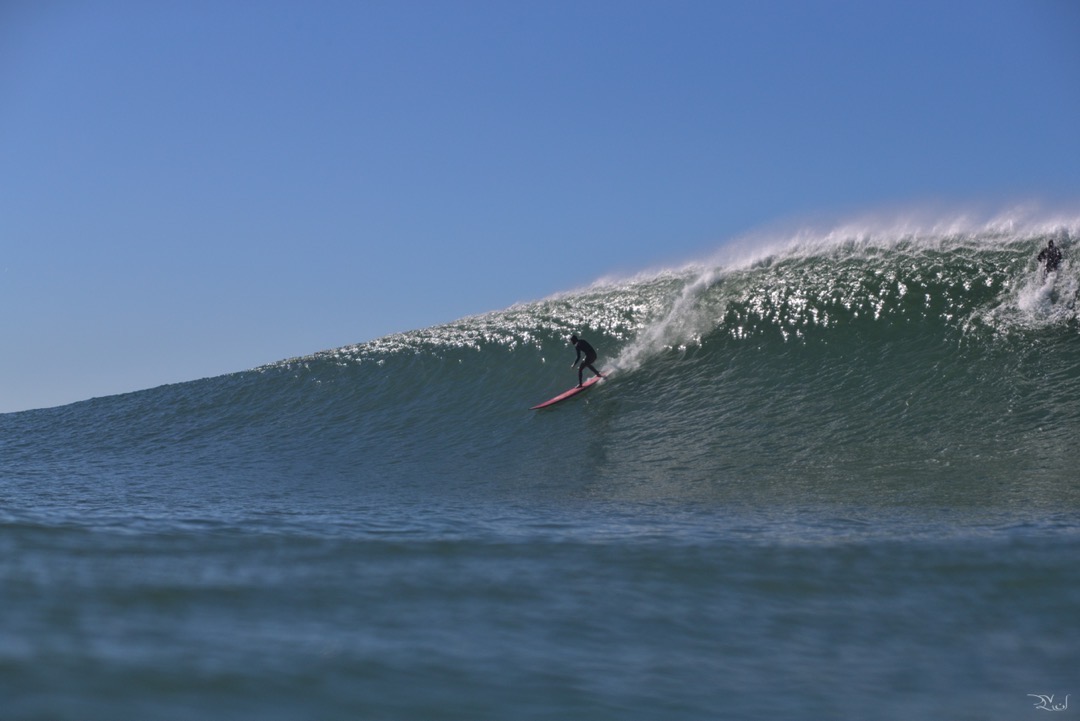 Even at fun size La Nord, seeing this view – caught inside paddling back out after a left – generally means in for a bit of a drubbing. Photo: @ln.hossegor40

Aside from boards, you seem to have a good quiver of motors, 4L, Landy, motorbikes… tell us a bit about  your love of engines.

My dad and Grandad sold cars for a living, so I grew up with a bit of car culture. I’ve rebuilt about ten Renault 4Ls, old French cars I grew up with. Then I sold some and bought the Defender as a bigger adventure car, I’m also rebuilding a 1962 Cadillac I got from an old guy for cheap. I love rebuilding these old cars, for me surfboards and cars go well together. I love motorcycles too, the freedom from going on a trip for a couple of days. I have a 1986 Honda 600 XL Paris Dakar model that I love to ride in the Pyrenees, it’s my other way to escape. You can feel the speed, you have to be really focused, one mistake and you could die. It’s a bit like riding big waves, and I love it. 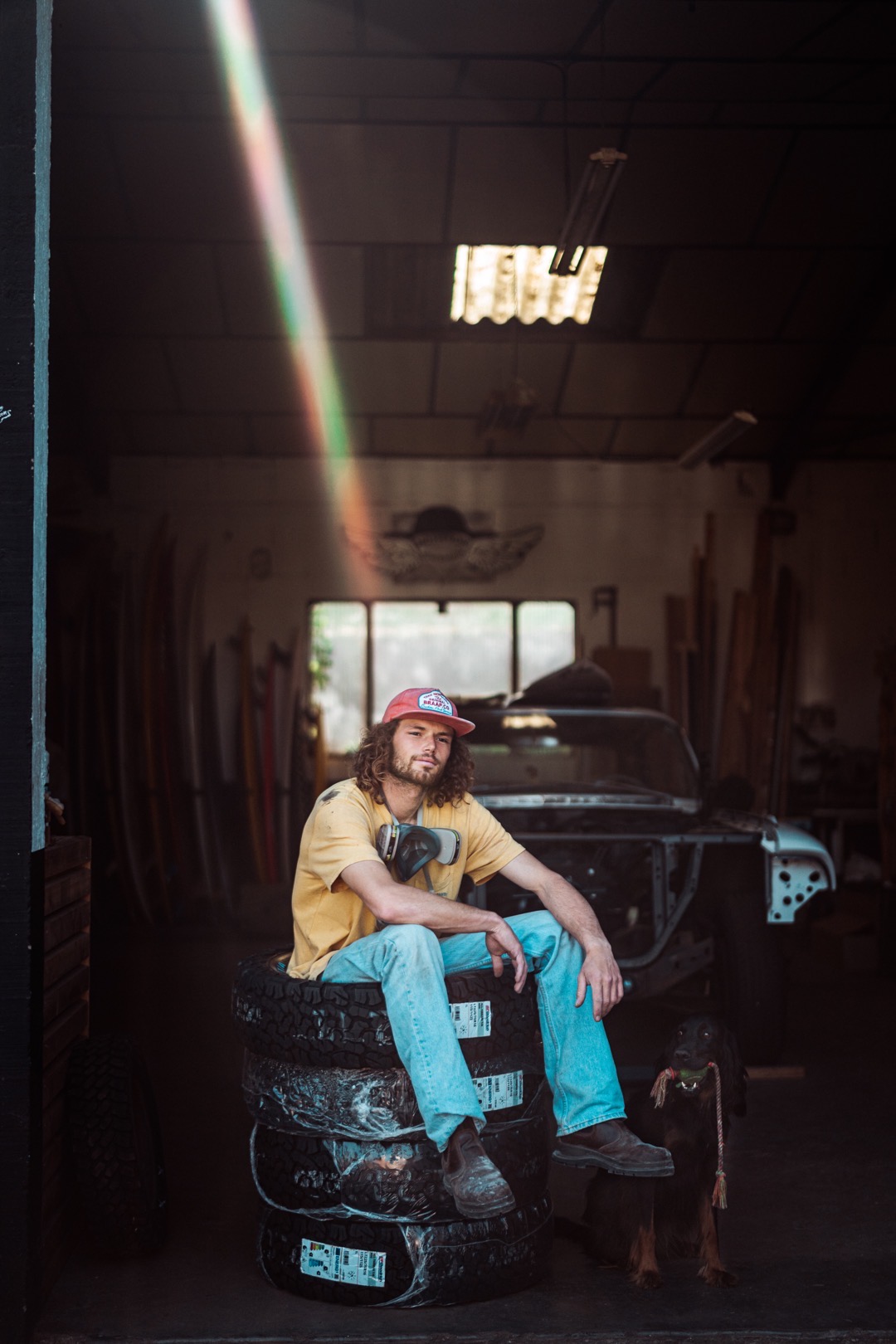 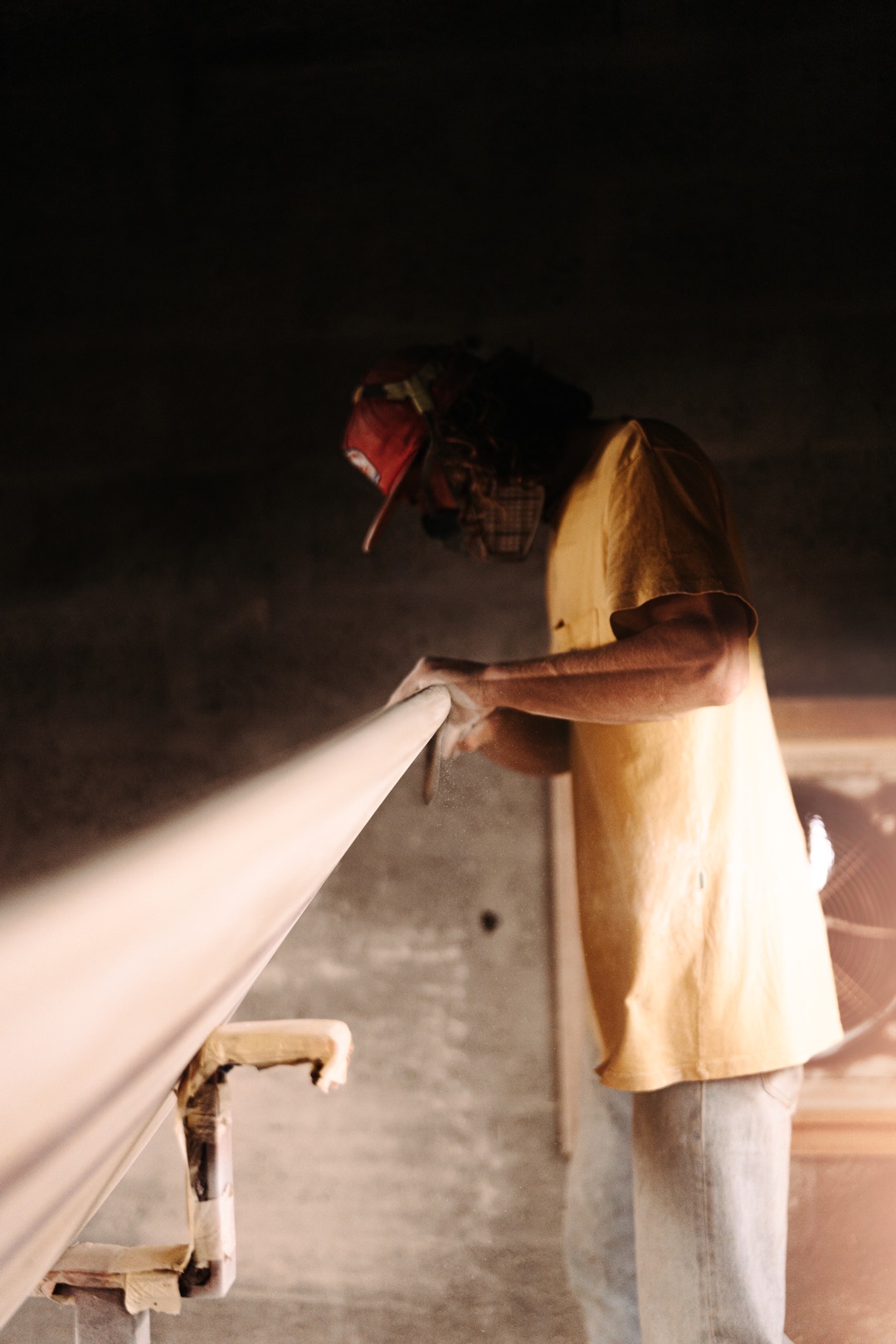 While Far East factories are a modern surf scene reality in meeting the demand for various products, a workshop out the back behind a favourite local sandbar that keeps hours according to the rhythms of swell, wind and tide will always be sacrosanct to the culture. Photo: @cocoricosun

Vissla‘s Creators & Innovators seems like a natural fit for you…

That’s exactly what I thought too, unfortunately they didn’t, at first (laughs). When I was 18 I was full of energy, shaping and surfing, I was like ‘This brand is for me! Plus, I know the boss, Derek, he’s a friend of my dad, I was at school with his daughters. Come on!’ I was super excited because for once I felt like a brand was matching what I was passionate about. So I hit them up to try and get in the team. But the brand was starting and they were still looking at different people with various different skills in surfing and shaping and I guess I wasn’t there yet . So I chased them for a few years (laughs) then one day, I was rebuilding an old caravan in my backyard, I got an email asking me to come by the office. They had seen what I was doing on my Instagram, and they were interested in getting me to create some stuff for them. So stoked, I couldn’t believe it! So I made some pallet furniture for them, they liked it, and we decided to get a workshop together so I could get a place for myself to build everything they needed. I’ve found an old workshop to rent, and this is now the place I live and work for the last 3 years. It’s been huge for me, my work. Plus, they provide me with the best wetsuits and gear for surfing.

What new projects are in the pipeline?

With Vissla we’ve built a mobile shaping caravan that we can travel around with and bring to events, to the beach. It’s a really cool concept, we can make exhibits of our work and people can come and see boards getting shaped outside of the usual places. Anyone who wants to check it out can find us at Wheels & Waves at the end of June in Biarritz, come say hi!