With Italy, Spain and Portugal on lockdown, what are the rules around surfing?

On Saturday night Portugal’s national maritime authority announced on its website that all beach-based sports and leisure activities involving crowds are now forbidden across the country, as well as on the islands of Madeira and the Azores.

While there is some disagreement on social media as to whether this includes surfing, many local sources, including the Associação Nacional de Surfistas (NSA) have reported that the ban does indeed extend out into the lineup. Yesterday they issued the following statement on their Facebook page:

“Attention to all surfers: according to the orders of the captaincies of the port of Lisbon, Cascais and Peniche, surf is forbidden for groups of 5 people or more from the beaches north of Albufeira lake to Obidos lagoon. In addition to the already known total ban in Porto and Gaia. The expectation is that the other captaincies will also take the same measures. In this sense, in addition to the strict observance of the requirements here, the NSA recommends all surfers to avoid going to the beach and thus also contribute to the collective effort at the beaches of Portugal”

The announcement follows a stepping up of isolation measures in an attempt to halt the spread of Covid 19. On the day following the ban a quick scan of Portuguese lineups suggested many surfers were either unaware or unconcerned by it, however, more recently we’ve had reports that it is being enforced. This image, posted yesterday, shows a policeman calling surfers out of the water at Baleal beach, a tourist and local surfing hotspot in Peniche:

“Police calling surfers out of the water for not keeping safe distance between them,” reads the caption.

In Italy, which has been on lockdown for over a week, the measures are also being enforced. “We got news from the beach there’s a swell running,” reports Italian surfing aficionado Nik Zanella on Instagram, “but the local harbour authorities explicitly told everyone not to get in the water. The piers and beaches will be patrolled so people are not allowed to surf. That’s it.”

There is also a full lockdown in Spain and the Basque country, with harsh penalties imposed for anyone in breach. “I’m locked at home and things are pretty heavy,” Basque ripper Kepa Acero told Surfline. “I never expected things were going to be like this. At least in my hometown, there’s no one in the streets. If they catch you running, walking around, you have to justify what you’re doing. And, of course, you can’t go surfing. There’s fines of 600 euros to 30,000 euros and they can put you in jail. I’m going crazy at home! But I guess it’s something everybody has to do right now. The sooner we stop this, the sooner we’ll go back to – well, maybe not normal, but back to work.” 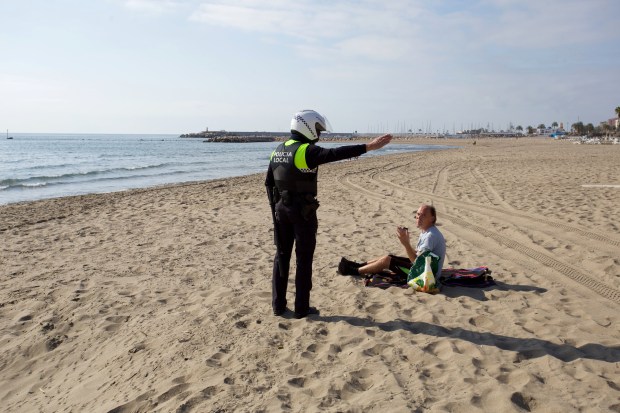 A man is ordered off the beach by a policeman in Spain. Photo: Solarpix

In France, the police have reportedly been clearing lineups and fining those getting changed in beach car parks or on their way to the surf.

While Britain still seems a way off from imposing such measures, some experts suggest there will be a lockdown phase similar to those currently underway across Europe, although it may not be for some weeks. Whether this will similarly include a ban on surfing though remains to be seen.