Should Surfers Travel? Spoiler alert: Nah. Not even.

We surfers are way ahead of all the riff raff out there. Streets, light years, etc. So much so, in fact, that any comparisons between us and the ‘legions of the unjazzed’ as one of our foremost prophets, Phil Edwards labelled em in the mid 60’s, seem unfair.

Oh go on then… let us indulge in a few, anyway.

There are very many reasons for our intrinsic sense of superiority, but being first to the cool shit seems a common thread. You see, our narcissism, navel gazing, quasi-spiritual utterings came way before any model selfie with Nietzsche / Gandhi / Mandela caption on Insty.

We were doing sanctimony and virtue signalling way before anyone humble bragged giving a homeless person a tenner on Twitter.

“We were on the nose bag by night, insist upon vegan organic brunch/social justice the next day dichotomy since way back”

We were all over munching macrobiotic, fasting, yoga, wheatgrass, decades before they jumped on that.

We were on the nose bag by night, insist upon vegan organic brunch/social justice the next day dichotomy since way back… at a time when they were still stuffing Greggs into their faces, drinking non-craft beers – and perhaps even more shockingly – had never even heard of Nusa Tengarra.

Aside from being more original (and better looking) we’re also just generally more interesting, because we’re so inherently conflicted. Like any well-drawn character, a good-ish baddie or bad-ish goodie from a scripted drama, we’re… nuanced. Kelly Slater ranks among the more eco-woke of the surf fraternity, despite spending the last 20 year flying in circles around the world and owning a surfboard brand. Photo WSL

And so it makes perfect sense that we also are the most outwardly self-assured.

Imagine the challenge then, the existential threat I felt when last year, when, while at Surf Europe (RIP) I commissioned Billy Wilson to did a piece with world renowned environmental journalist George Monbiot concerning surf travel.

It went right after the ‘10 Must Surf Waves in Indonesia’,‘How To Beat the Airlines Excess Baggage Fees’ and ‘5 Boards To Take To Tahiti’. The top line old George was imparting was that surfers should “Avoid travelling (e.g. to Indonesia) on planes, for which a single return flight would equal to the half the average global citizen’s carbon footprint for an entire year.’’

If surfers really cared about the environment as much as they claim, they’d stay at home.

Not content to deny us our right travel, Monbiot added further outrage to heresy by suggesting we “explore the coast of Wales by kayak, instead.”

Ok ok so most of the above was deliberately antagonistic. I had to go in two footed, trying to wrestle your attention away from the ‘This guy has invented a plastic alternative from cucumber that biodegrades’ clips. 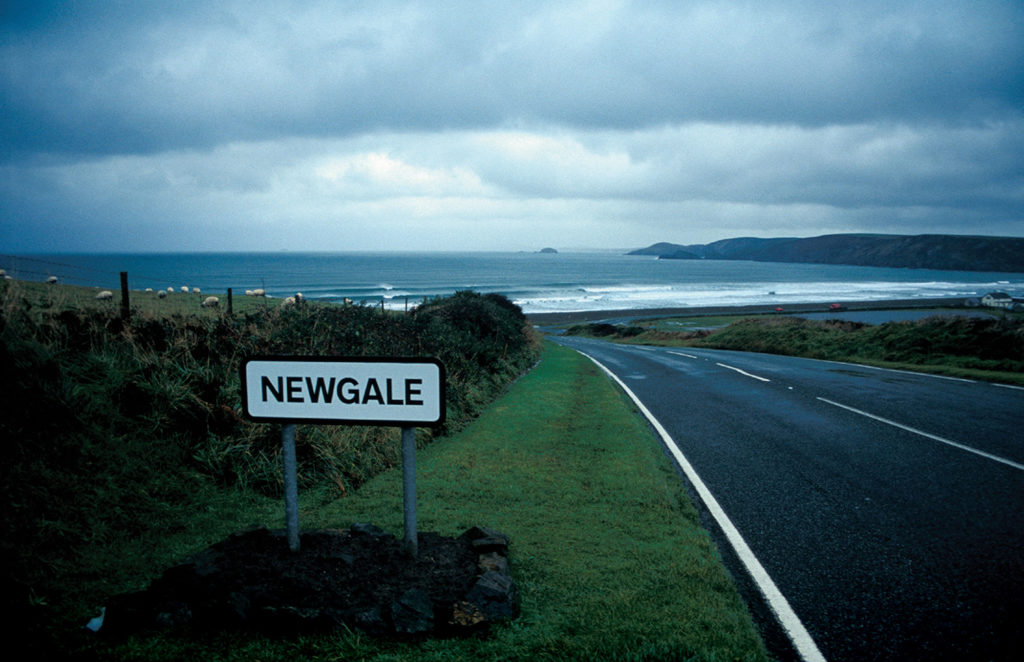 Who wants to go to Macaronis, when you could have a nice kayak mission to Newgale? Photo Alf Alderson

The serious point in all this that surf travel, like all other forms of essentially self indulgent air travel must surely now be regarded as an outdated, unsustainable stain of neo-liberal capitalism. Want far-flung ‘Experiences’? Got an intercontinental ‘Bucket list’? Shame on you. Your wanderlust is fucking the planet to death.

“Your wanderlust is fucking the planet to death”

My own culpability runs perhaps even deeper than yours, hence my newfound evangelism. Everyone goes on holibobs, of course, but the surf media and the pros we lionise, well we chase swells. It wouldn’t be uncommon to have swell forecast maps open for coasts on 3 different continents at a time, waiting until the last minute to decide where to book flights to.

I once went to Australia for 36 hours, I’ve been to Tahiti, Bali, Micronesia, Fiji each for under a week, several times. A former colleague flew Paris/Brisbane/Aukland/Fiji/Tahiti and back for an afternoon’s surfing from which we published a single photo.

A new morality is surely in order, one that requires slightly more gumption than joining in the seabird-eating-plastic collective outrage. The idea of being well-travelled meaning you’re considered wise, learned, or in surf terms ‘core’, perhaps needs a rethink too.

As Monbiot wrote back in his 2006 book Heat “It means the end of shopping trips to New York, parties in Ibiza, second homes in Tuscany…  unless you believe that these activities are worth the sacrifice of the biosphere and the lives of the poor.”

A hierarchy of sympathies could be a starting point, assuming all commercial aircraft aren’t instantly grounded the moment this article is published. An essential work trip, or a visit a loved one on their deathbed would surely come above the ‘just fancy it’ sojourn.

Or perhaps worse still, to curate square photos in a phone app, the new hunting trophy room of the entitled.

I mean, who laments offshore oil drilling, and yet still does that?