As the surf world continues to reel after one of the heaviest and most shocking moments in the history of competitive surfing, we’ve dug around on social media to find the best, most heartfelt and silliest social media reactions to the events:

Glad to know this guy and even happier that he swam/walked away unscathed. The only mark on him is a tiny scratch (probably from hitting the shark) on his left hand knuckle. I got an email from a friend tonight who said he clearly saw a shark figure in a wave during the quarterfinals from a drone shot. There were multiple water photogs (including @jimmicane who shot this photo) swimming all day. I believe good things come to good people and although you can’t say this was ‘good’, the outcome was amazing. @mfanno’s instincts kicked into high gear and his scramble to face the shark and keep the board between them may have saved him. The scariest moment was when he turned around to face where the shark would be coming from after swimming 20 meters towards shore. I can’t even imagine the vulnerability he must’ve felt. Great job by the contest announcers, water safety for getting right on it, @julian_wilson for paddling to help a friend out and basically everyone there to support. Hey, you didn’t surf half bad this week either! #GiveHimTheTrophy!

Today will go down as a day in history… Not only for our sport but for man kind. Every time we enter the water we put ourselves at the fate of Mother Nature… There rarely comes a time when the jerseys, scaffoldings, webcasts, fans, titles, etc. become irrelevant and when our truest characters are shown… today was that day… These two men showed us Heroism, friendship, courage, strength, and most of all brotherhood… Honored to call them friends, blessed to call them family… So glad you guys are alive!! @mfanno @julian_wilson A photo posted by rob_machado (@rob_machado) on Jul 19, 2015 at 8:22pm PDT

Another moment that sums up the emotion of yesterday’s shark incident. @julian_wilson safely returns to the arms of his girlfriend @ashley_oh. #jbayopen #jbayopenshark

Imagine you were watching a skate contest live on TV and while someone was skating a fucking giant bear ran out of the woods and crash tackled them off their board and started dragging them around and then they punched it and it ran away. Pretty much what just happened. Really happy that everyone was ok. A photo posted by DION (@dionagius) on Jul 19, 2015 at 10:34am PDT

Some responses took a slightly more light hearted tone and whilst we don’t necessarily condone such flippancy to what was essentially a near death experience, we do want to honour the Ozzie’s culture of laughing in the face of everything, so here are some of our favourite meme’s to come out of the debacle: 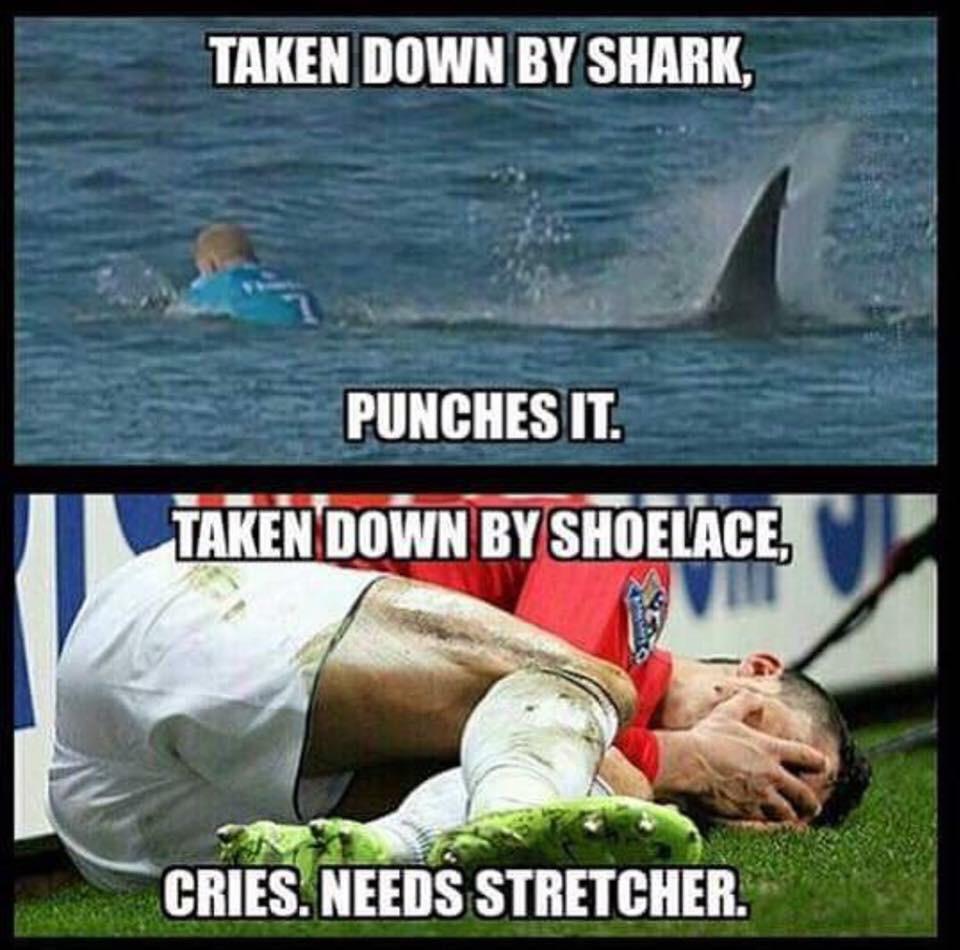