WATCH: Stone Cold Not Sober; A Brand New British Short Starring Harry Timson After 10 year dodging the British winter, Harry Timson made it his mission to uncover the very best of it for his latest short.

Harry Timson has long been considered one of Britain’s most exciting free surfers.

After growing up in Newquay, his presence has been scarce in Cornish lineups over the last ten years, as he swapped his childhood stomping grounds of Fistral and Harbour left for winter stints at Lakey’s and summer stints in Hossegor.

That is, until last year, when he finished a season on the continent and decided to begin work on a project with Newquay based filmer Ollie Treacher based exclusively around home.

Nine months later and the fruits of the goose have come together as ‘Stone Cold Not Sober,’ which premiered last week to a huge crowd in Newquay before its shortened, online release.

From days spent from dodging seals in the impact zone of a Cornish cove, being questioned by armed police checking a notorious Scottish slab and trying to film in sideways rain, there’s a lot to embrace when making a British surf clip. But with SCNS, the boys have done just that, creating a short that truly captures the turbulent moods of winter in our humble isles.


Last week ahead of the premiere we caught up with Harry and Ollie to talk about the process of making the film.

WL: So you’ve been going away for the winter for about 10 years. How come you decided to make a clip around Britain now?

H: When you’re travelling that much you never really feel like you get to stop, so when I came back home at the start of October, we had it in mind to do something different. You can always go back to Indo and make the same clip- and the surfing gets better every time but at the end of the day it’s still the same clip. So we decided to make a clip purely from the UK winter, because how many high end edits do you see like that?

With the exception of Oli [Adams], there isn’t really anyone doing it. We did the full winter, from October till spring, just chasing swells and sticking it out and it happened to be one of the best winters we’ve had for a few years. Honestly, it’s opened my mind so much, I’d be more than happy to stay around here for winters now.

It just proves you can score good waves anywhere, it just takes that little bit of driving around- because when you see a chart up in Scotland it’s pretty easy to make the mission. I hope it just puts it out there and shows everyone that we get really good waves, and then people will stop asking that question ‘oh you get waves in England, you guys surf?’ when realistically we have one of the biggest surf scenes in the world. 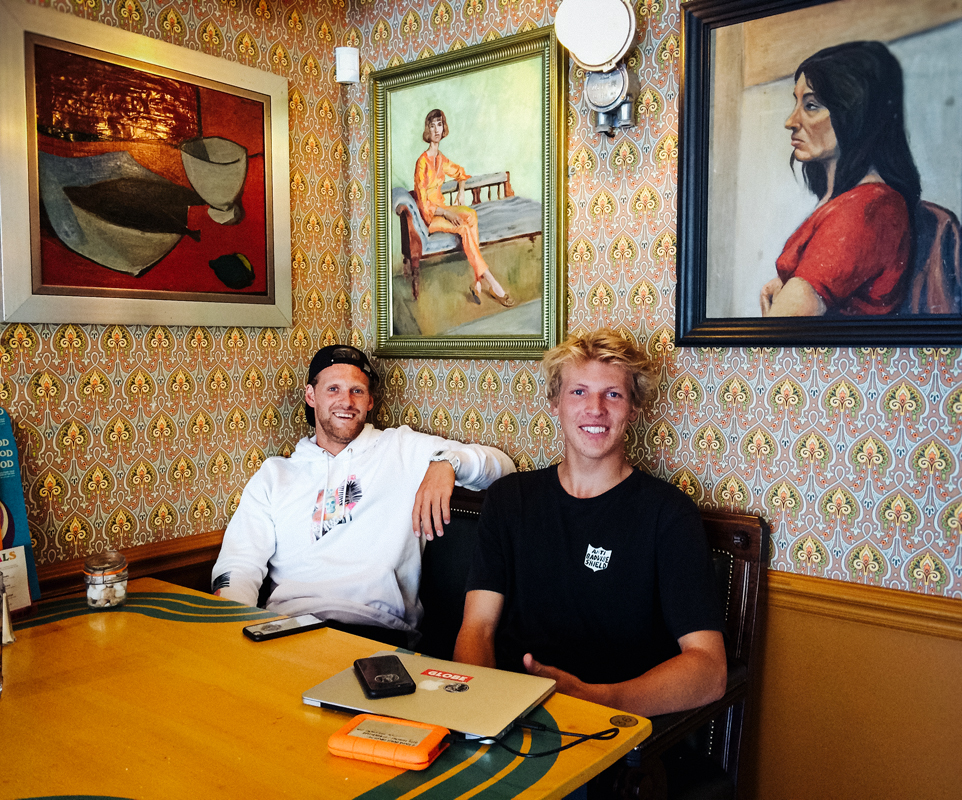 WL: So the main goal is to showcase your surfing and the waves around Britain, is there anything else you wanted to achieve with it?

I think every clip I put out has got to be better than the last clip, and that’s a lot harder at home, because when you go away to Aus or Indo and it’s real consistent and you’re not wearing all your rubber.

WL: Were there any times during the production when you said to each other ‘this is why no one bothers trying to make an edit in the UK….’

H: You Gartside know better than anyone what a good old goose chase is like…

O: There’s days where you drive to multiple spots and you just don’t get anything,

H: Closeout after closeout, you’re just trying and trying. It’s like fishing, you can do hours and hours and not catch anything and then you can go out one day and everything just comes together. We had one session at high tide fistral where we just cleaned up. You know you’re not surfing a reef, you’re surfing a beach that never looks the same one day to the next, but that’s part of it, those are the waves that we’ve grown up surfing, so we should know where to look. 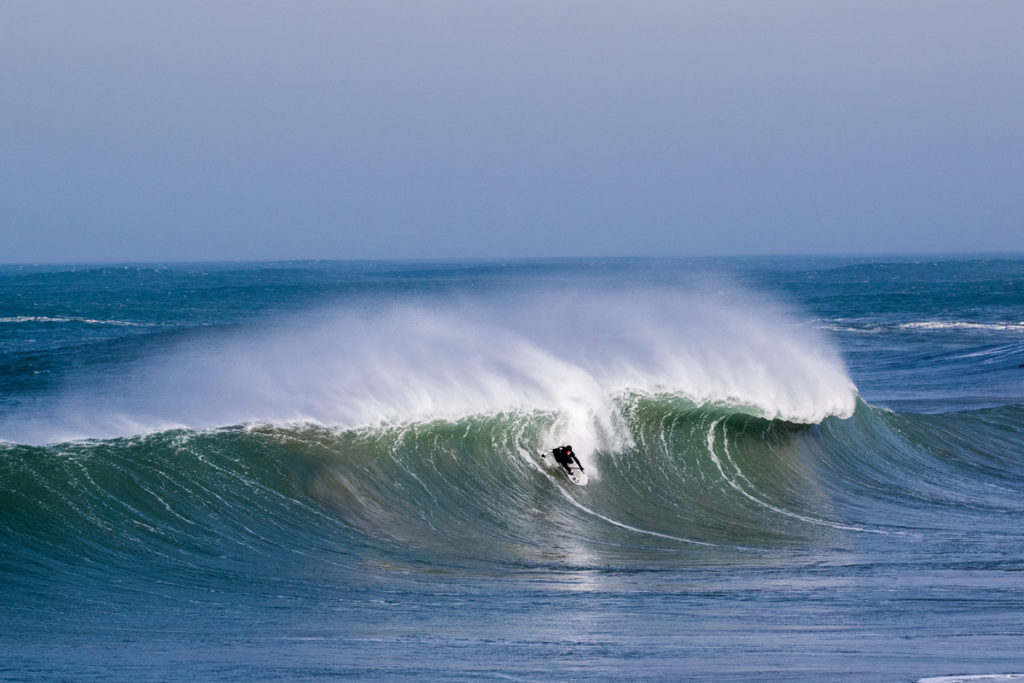 WL: And was it hard trying to make a film when it’s constantly dark and gloomy Ollie?

O: You’ve just got to go with it and embrace it. I think it shows a more accurate picture of what surfing here is like. It goes from grainy dark, windy offshore days to fun sunny sessions.

O: It’s funny going out standing in a cave, with a bin bag wrapped around your camera, absolutely drenched, it’s good fun you know.

LG: Do you feel like you’ve got unfinished business anywhere or did you pretty much score everywhere you wanted to?

H: We only really had Scotland on our list, and I feel like we had two really good trips up there. It wasn’t as good as it gets, but we really wanted to go and score Bagpipes and we got that at four foot with just me in the water for a lot of the time, so we’re not complaining one bit. 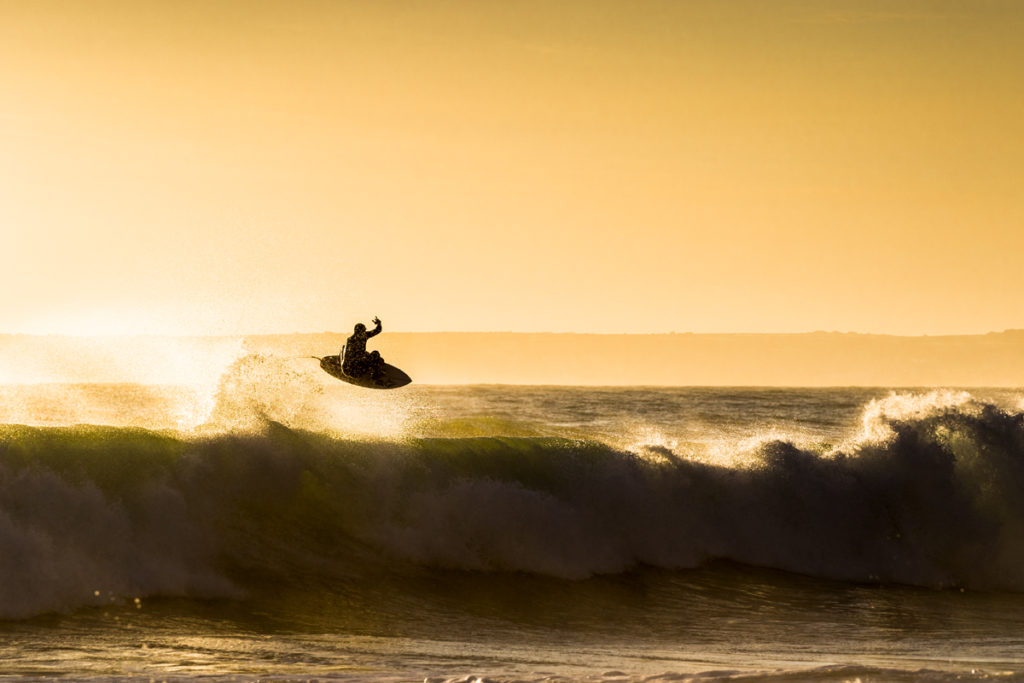 LG: So it wasn’t a case of making a list of all of the best spots in the UK and ticking places off?

H: Nah, it was just looking at where was going to be good when we could go. If you had the money and the time and dedication to spend a whole winter flying around the UK, being on every swell you could make a crazy film, better than anything anyone’s seen. But it’s not realistic, everyone’s always got something on and also- the whole point of this film was to try and make something heavily based around home.

LG: I guess it’s nice to show people the places they surf every day at their best…

O: It’s quite relatable for people around here, to see someone surfing their waves really well, because most people who surf Fistral aren’t going to be able to stand up in a barrel in Bali are they….

H: Everyone who watches the film from around here is going to know exactly where each spot is and they’ll be able to think like ‘ah yea sick, I was out on that day,’ which is just nice because it’s home. 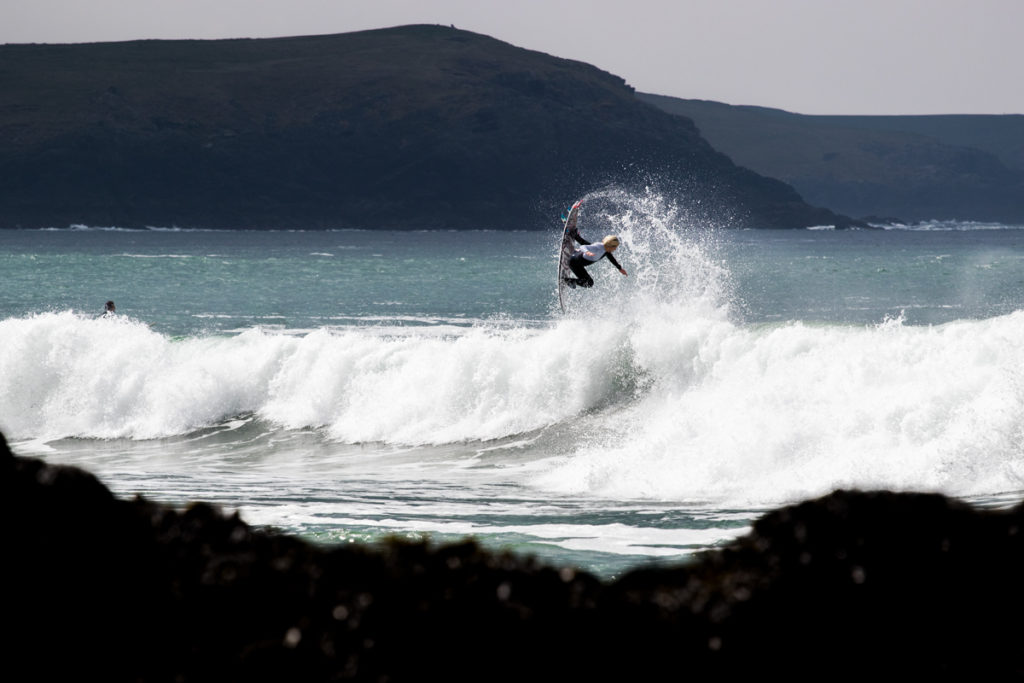 WL: I think a lot of people aren’t that interested in seeing high-performance clips from the tropics, but if someone’s out at their home break ripping, they still froth on that. I guess this is like taking that and putting it in an edit. How excited are you to premiere the film and actually show it to people in the flesh?

H: The thing is, I’ve never had an edit like this, where you’re not just trying to knock it down to three minutes of your best clips of the last 3 months. I wanted to develop it a bit more, it’s a little bit more slow pace, because you’re not cutting yourself down. So it’s nice to do it on the busiest week of the year in Newquay, get everyone down there, Korev have sponsored it so we’ve got loads of free beer and Volcom have got a load of goodies. With the amount of people who ask what you’re filming for and stuff, it’s great to be able to show it to everyone.

O: It’s a funny feeling sitting with people and getting to see people’s reaction as they watch it, it’s very distant when it’s just numbers on a screen. 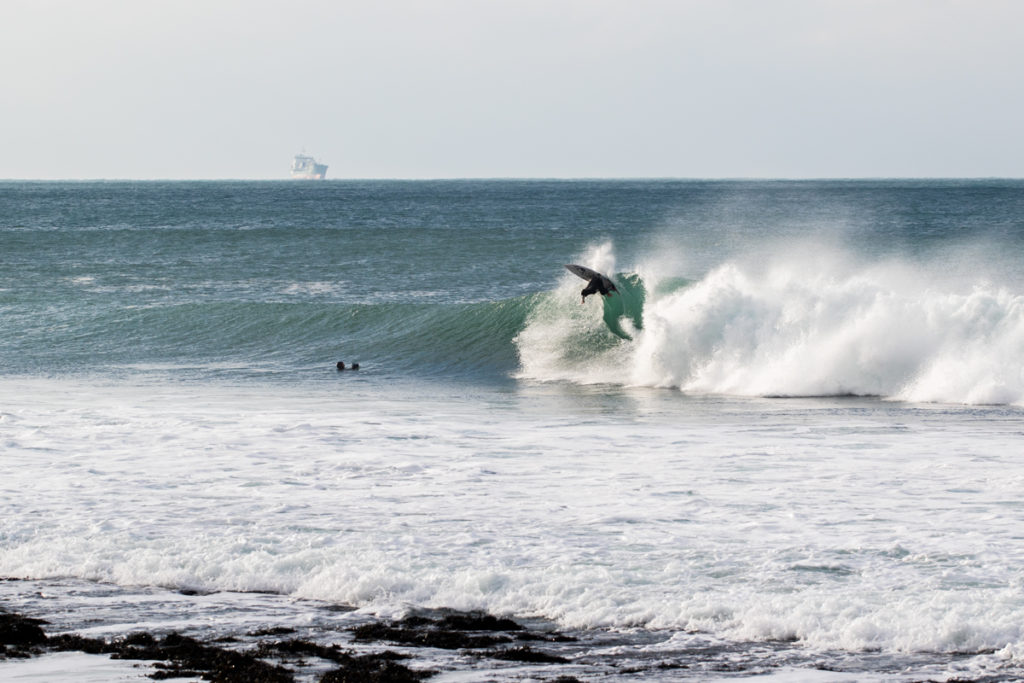 LG: What were some of the most memorable sessions from home?

O: There were a couple of days when we went down to the south coast and spent the whole day down there, had a pasty on the pier and surfed all the way through the tide. Those were a lot of fun.

H: Yea, those are always special days, you know it’s a bit rare and everyone gets all excited before hand. That one day we had it when we were all snowed in up here, and everyone was panicking they were going to miss it the night before. We all set off first thing in the morning feeling like we were properly braving it and by the time we got to Hayle there was no snow or frost or anything. 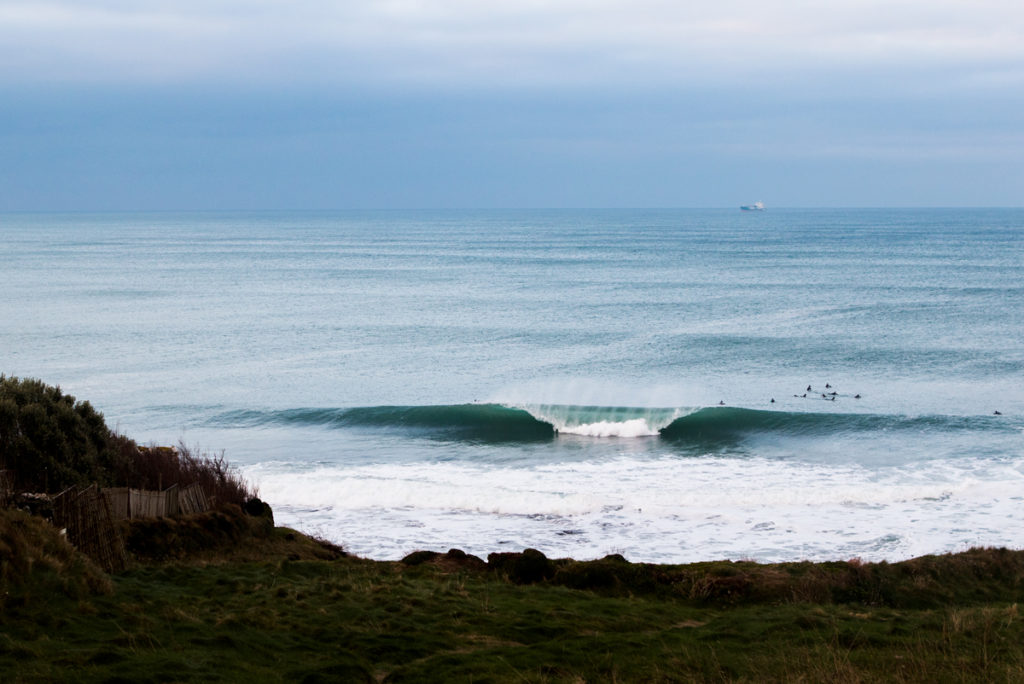 LG: And what about elsewhere?

H: The second trip to Scotland was super fun. Ollie had taken his holiday pay and gone to Sri Lanka, so I messaged Seb [Smart] and asked if he knew anyone who’d be keen to film, so me, him and Sam Breeze all ended up going up together. That was a great trip, and we didn’t have to squeeze into the Micra for the drive.

LG: So what’s next now this project is wrapped?

H: Well it’s going to be a big few weeks with the premiere and then releasing the web clip, but as a freesurfer you don’t really have any down time, so it’s on to the next thing now. Let’s think of something new you know, somewhere different. 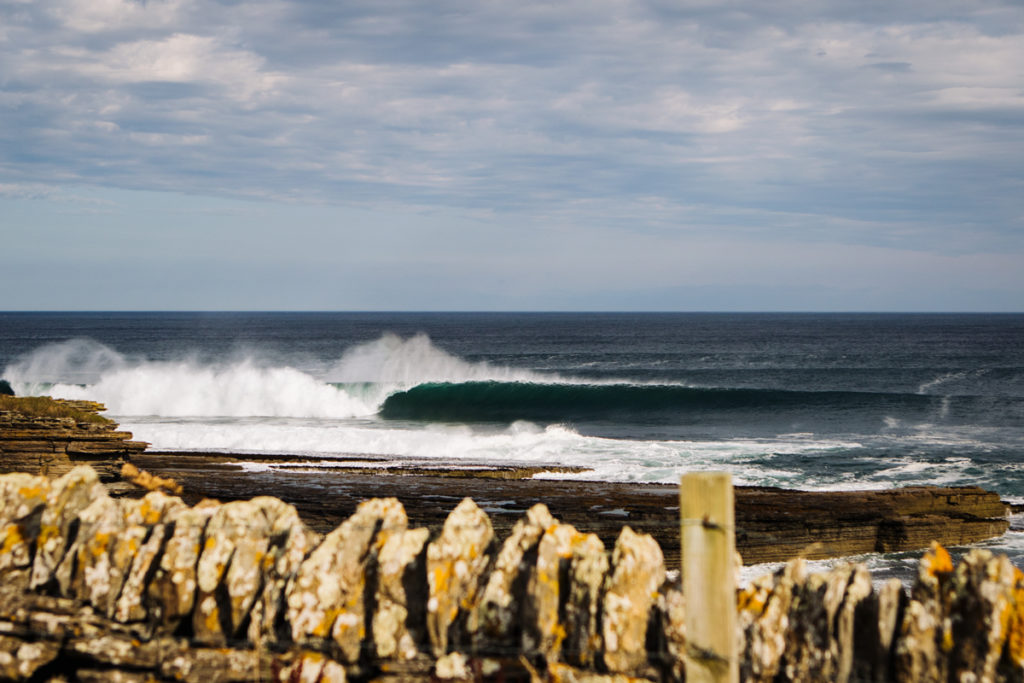 LG: What about you Ollie?

H: The nice thing now is that when I go away and surf waves with a little bit more punch I’ll just end up going higher and faster! Right now though we’re just super happy to be releasing this.