Home » What happens when you partner the RNLI with a disruptive start up offering water without waste with the objective to ‘design out drowning’?

What happens when you partner the RNLI with a disruptive start up offering water without waste with the objective to ‘design out drowning’? A conversation with Lee Congdon the Cornwall based surfer behind Sipple hydration stations; a brilliant innovation that seeks to do-away with the need for single use water bottles for good.

Last year the RNLI’s ‘Design Out Drowning’ programme challenged designers and communities to rethink how we reduce coastal drowning by rethinking how and where safety messages and drowning prevention interventions are deployed.

Wavelength Media joined the call for entries, introducing the RNLI to an exciting new startup called Sipple, founded and run by a Cornwall based surfer called Lee Congdon, whose innovative approach to water refill stations we believed could be a game-changer.

The idea was simple; install Sipple hydration stations at strategic locations along the coast, offering beachgoers the chance to fill up their reusable bottles for free, just as soon as they answer a simple question about beach safety.

The goal was two-fold; eradicate the need for members of the public to buy a single-use water bottle, while still keeping hydrated during their day at the beach and educate them about how to stay safe in the sea.

The RNLI picked the project out of a number of innovative ideas put forward and agreed to a trial, which included the installation of two machines located near the Cornish coast. The first was placed in Alcatraz surf hire shop at Perranporth Beach and the second at Hendra holiday park in Newquay.

After a summer in-situ, the results have been incredible, with each hydration station being used nearly 2,000 times and, based on the success of the trial, we’re super excited to explore the next stage of the trials and in the future the potential for a nationwide rollout.

WL: Could you tell me where you grew up and how you go into surfing?

I moved to Bude in Cornwall when I was seven and pretty much grew up on the beach. I started bodyboarding at around 14 and got in every day after school if there were waves. My mate had a house at the end of Breakwater Road in Bude and it became like my second home. We used to jump off the breakwater to get out back and avoid the paddle out. After my first year at Uni, I decided it was time to get a proper surfboard and stand up, especially as I already skated and snowboarded. It was an easy transfer. All holidays are now based around surfing. Costa Rica still my favourite destination and a great model for how humans and nature can coexist.

A beautiful day of waves in Bude. Photo @lugarts

WL: Could you tell me about the idea behind Sipple and why you decided to start it?

Having grown up in Cornwall, on the beaches, in the sea, and seeing the damage single-use plastic has done over the past 30 years, I realised something needed to be done! Sipple was set up to ultimately reverse the damage the bottled water industry has done to our environment.

The idea of Sipple was born whilst sitting in the surf off the east coast of Malaysia, in a sleepy village with a sick left-hander. It struck me that like the tides, rubbish will keep washing up on our beaches until something is done. Although there are great initiatives to clean up the beaches (#2minutebeachclean for example), I realised the problem needed to be tackled at source. As consumers, we have only been given one option to hydrate while on the go: single-use plastic water bottles. Sipple is providing infrastructure in the form of hydration stations to ultimately give you another way to get water when you’re out and about. 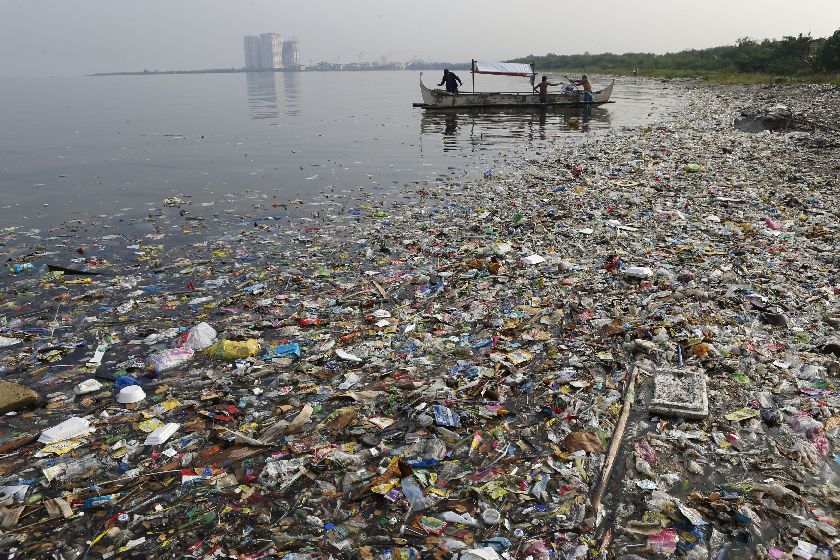 Like many of south-east Asia’s nations surrounded by sea, Malaysia has a particular problem with marine plastic pollution. Photo: Reuters via The Malay Mail

The Sipple x Chilly’s bottle is a part of the solution, every time you refill with tripled filtered purified water from a Sipple hydration station you remove another plastic bottle from the waste stream. Our goal is to change the way the UK hydrates, eliminate excessive waste and protect the planet.

This idea isn’t new, as philanthropists of the past have often looked to provide clean water supplies for the public.
The first were erected in Liverpool by Charles Pierre Melly, who had seen stone drinking-water fountains in Geneva and believed that Merseysiders, especially those working on the docks, would benefit from access to free water- as the alternative was usually beer from public houses. Melly paid for the installation of the first fountain, made of polished pink granite, at Prince’s Dock in 1854.

By 1858, the number of fountains in Liverpool had reached forty-three and seeking to encourage other cities to embrace the idea, ‘Fountain Melly’, as he became known, helped fund fountains in Norwich, Plymouth and Douglas on the Isle of Man. The following year, inspired by Melly’s example, Edward Wakefield and Samuel Gurney, a Quaker banker, Member of Parliament for Penryn and Falmouth and nephew of the prison reformer Elizabeth Fry, founded The Metropolitan Free Drinking Association. 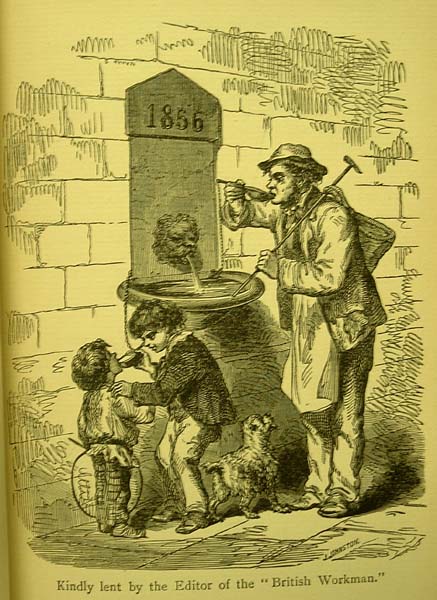 A ‘Melly Fountain’ in use. Image from Memoirs of Charles P. Melly, via Liverpool Monuments

The FDA was a philanthropic society dedicated to building free public fountains across London, the association was closely aligned to the temperance movement. While acting out of a sense of civic duty, its Quaker founders also saw a moral mission in reducing alcohol consumption among the poor by providing free and easy access to drinking water. Excessive beer and spirit drinking along with impure water were considered to have contributed to two especially lethal outbreaks of cholera in the capital in 1848/9 and 1854.

Sipple are using the idea of hydration stations to tackle a different social issue/problem which is the overconsumption of single-use plastic and the waste it produces.

WL: How has your relationship with surfing fed into the inception and development of the business?

I suppose the simple answer here is that surfing and being in the ocean opened my eyes to the huge problem at hand. You wouldn’t want to play football on a pitch covered in rubbish. I want to surf without being surrounded by single-use plastic. But I also want an environment where wildlife can thrive is not maimed or killed through our actions with single-use plastic.

We all need to question our use of anything single-use and our culture of preserved privilege; the idea that we deserve convenience at whatever cost to the environment. We all need to do more in our daily lives to help eliminate the need for single-use plastic. The excuse that carrying a refillable bottle isn’t convenient isn’t good enough. 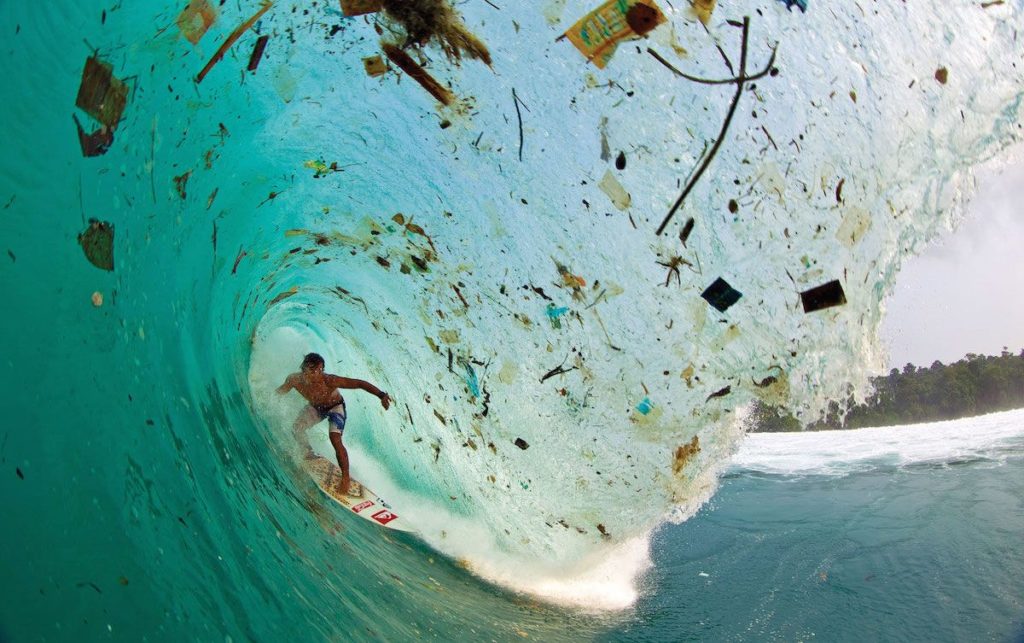 Surfing in a sea of trash.

WL: What have been some of the challenges you’ve faced?

I suppose the biggest challenge is profit over planet, businesses assume that we will be taking from their bottled water sales. Which is massively profitable to businesses. 10 x mark up in most cases.

Sipple is actually providing another revenue stream to our partners, as we are offering a service which isn’t currently available to the 16million UK individuals who currently own a refillable bottle.

Also, people are not willing to pay for water, (even though they will be saying this whilst holding a bottle of water they have paid for) although we offer free water, we also offer upgraded water that is Icy cold and 3 x filtered/purified.

WL: What have been your biggest achievements to date?

Every day/week we have another achievement! I suppose the ones that stand out the most is our involvement with TED. I have followed their conferences and talks for years and I love how they offer different perspectives/alternatives on so many great subjects. We sponsored the TED Summit 2019 in Edinburgh where the hydration station was described as a futuristic water station. 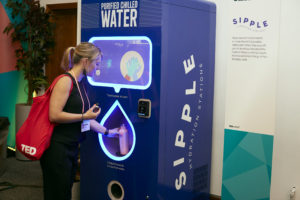 Also teaming up with the NHS which is struggling due to government cuts, so being able to provide them with an extra revenue stream is great.

Teaming up with the RNLI on beach safety has also been a highlight.

WL: Can you tell us a bit more about your collaboration with the RNLI on this initial roll-out of Sipple at the beach?

The collaboration with the RNLI is a great collaboration both for the RNLI and Sipple. The concept is simple with the RNLI partnership: users unlock free water by answering a safety question that might save their lives. We hope that this interaction will bring beach safety to the front of people’s minds. These stations enable us to educate people visiting the beach in important safety advice, reduce the prevalence of single-use plastics on the Cornish coastline and help people to stay hydrated on the beach.

WL: What do you hope to achieve with the business in the future?

The overall goal with Sipple is to see hydration stations within easy reach to people whilst they are out and about. Giving consumers a choice on how they hydrate on the go, ultimately facilitating cultural change in how people access water.

WL: You’re tackling one part of a much larger environmental issue. Do you think in the future individuals and companies coming up with design innovations like this are the way that big environmental issues are going to be solved?

This has got to be the future for brands and products! Refilling one container for life. We have been misled for years that if we recycle, the product will be recycled into another of the same product. The reality is that although these waste products may be recyclable there isn’t the infrastructure to facilitate their recycling.

We need to look at circular economies where there is little to no waste. This is beginning to happen with Refill stores springing up across the country. Along with the bigger supermarkets trialling similar schemes. We have all shifted to a bag for life, now we need to roll out that reuse mentality far and wide. One idea we should adopt especially in the takeaway industry is a container much like the Indian tiffin box. You pay a deposit and keep the box until you order again when it is then collected and returned. Every takeaway could use the same box, so in theory once you have purchased one or two sets it’s fully circular. No waste.

WL: I imagine you have the chance to meet lots of fellow business owners with innovative ideas designed to reduce waste and combat the environmental issues of the day. Are there any other particularly exciting things you’ve come across you’d like to share with our readers?

I am currently helping a cosmetic brand with a refill station. Ecover are also doing great things with refill stations. It would appear all areas of design are looking at a more circular economy. This is becoming very apparent in the fashion industry with brands moving to hemp as a more viable product to cotton and nylon. Cradle to cradle design. 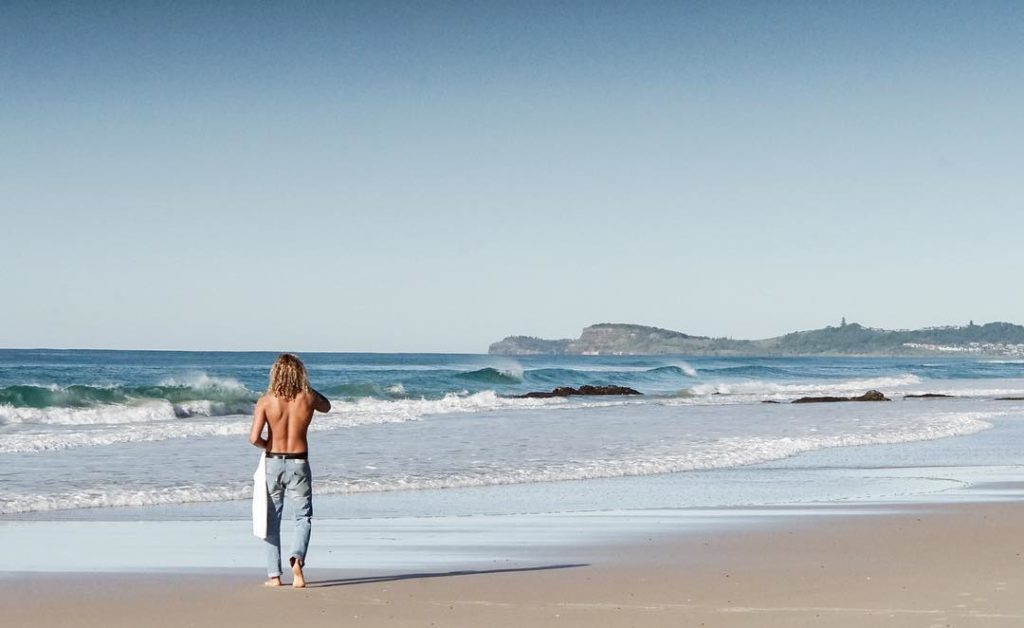 One brand I like is MUD jeans. Their concept is that you don’t own the jeans, you rent them. They ask you to sign a pledge, stating that the jeans will be sent back and shredded ready to be recycled into a new pair of jeans, once they have served their purpose. It should be the responsibility of all brands to recycle their products/packaging. Waste is a design flaw!