Home » Surfing Through An Uprising In Nicaragua

Surfing Through An Uprising In Nicaragua

This is what happens when a pre-booked surf trip clashes with an anti-government uprising being violently repressed.

For the last 40 years Nicaragua has been famous for rum, rodeos and good surf, just a low-key spot for those who want to avoid the crowds of Mexico and the expensive bills of Costa Rica.

But in the last few months the country has descended into a state of turmoil, with great swathes of the nation participating in protests to oust their President Daniel Ortega and his wife (the Vice President) Rosario Murillo.

The upheaval began with a small protest against social welfare reforms in April, but when the protests were violently repressed, the campaigners dug their heels in and now they won’t stop until Ortega is out.

The death toll is now well over 100, with many blaming violent government forces for the deaths, and protesters have blocked almost all roads through the country (you will find blockades everywhere from main highways to remote farm tracks).

When I planned a surf and yoga retreat in the country for May this year, I had no idea I would be heading into the heart of total chaos.

It was 5am and I was in transfer in Mexico City when I received an email from my accommodation in Nicaragua saying they couldn’t collect me because of the protests against President Ortega.

There were blockades on the roads, I was told, and the hotel couldn’t guarantee we would make the journey.

As I read the email, I was 4 hours from my connecting flight to Nicaragua with no idea of what to do next. I had my own plans to think of, as well as the people coming to join my surf and yoga retreat. 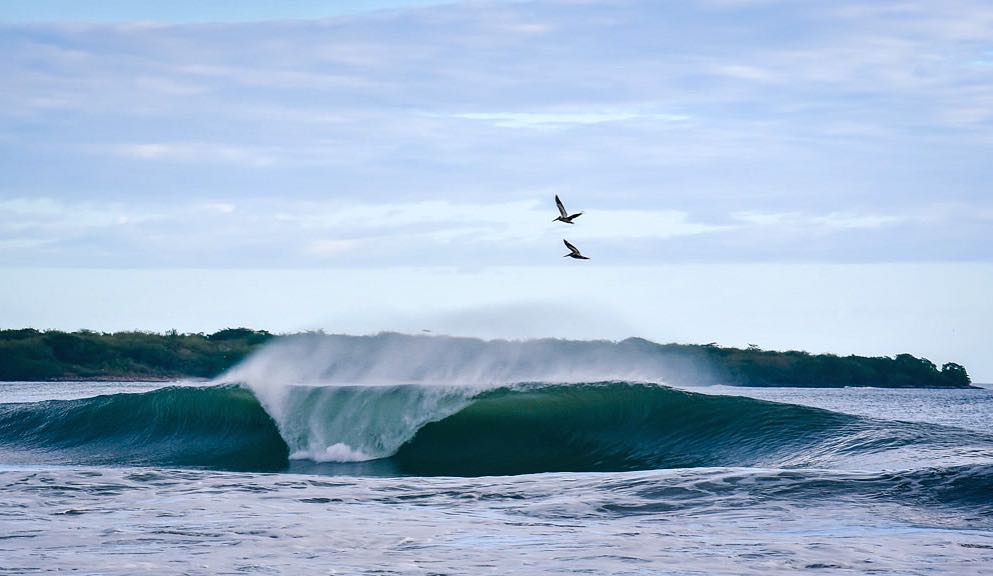 I started contacting everyone I knew in Nicaragua, trying to find out what was really going on. I had known about the protests for weeks but everyone had assured me that our trip would not be affected.

With bleary eyes, I messaged and called my contacts in Nicaragua. The message was that the coastal towns were peaceful but protesters had set up roadblocks on the Pan-American highway through the centre of the country.

A friend found me a place to stay in El Transito, a surf spot an hour away from the city, a distance that I could definitely make despite the protests. So with a new plan only just pieced together, I boarded the connecting plane.

There was only a handful of passengers on the short flight to Managua, some business people and a few hardened surfers (leathery skin and bloodshot eyes), the kind of people who wouldn’t let a political coup get in the way of good swell.

It wasn’t exactly reassuring that there were so few people flying to Nicaragua that the airline had changed our seats to balance the weight. 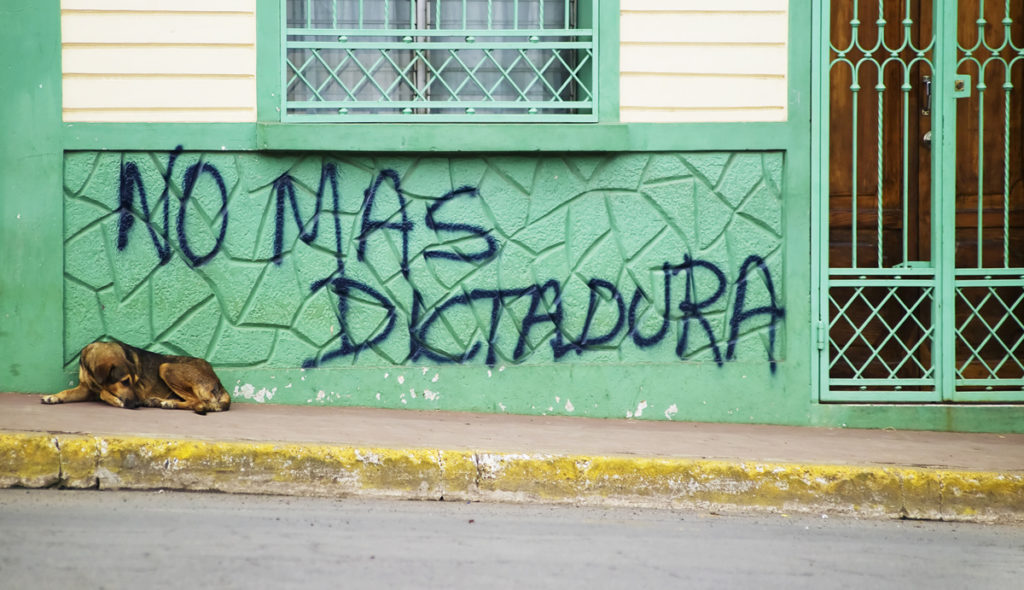 ‘No more dictator’ reads some anti-government graffiti scrawled on the wall of a residential street just outside the city. Photo Scott Griessel

Thankfully, everything was calm at Managua airport and there was a driver waiting to collect me. His name was Steve, he had an iPhone and wifi in his car, and for some reason those were the most comforting things I could ask for after a morning of acidic apprehension.

As Steve drove towards El Transito, I noticed the city was getting more and more dense. I had assumed that our journey would take us away from the city, away from the protests and the conflict, but as we came to a roundabout lined with stalls selling Nicaraguan flags, Steve pointed out a University building covered in graffiti.

“That’s where all of the student protests are happening. Can you see that road is now closed because of the manifestations?”

One of the graffiti scrawls read ‘Ortega asesino’ (Ortega the murderer).

Suddenly the iPhone was not reassurance enough.

Luckily for me and Steve, the manifestations (protests) began in the evenings and we made it safely to El Transito, a sleepy village on the West coast.

I arrived at a surf camp called Solid Surf Adventures, run by an American woman and her Venezuelan husband. A place so chilled that you could never guess what was happening in the city.

The only other guests were two travellers from the UK, Ned and Chris, who were on a surf trip from Costa Rica to Nicaragua in a Suzuki Swift (both unfazed by the fact that they could barely surf and Chris had only passed his driving test 3 weeks before). 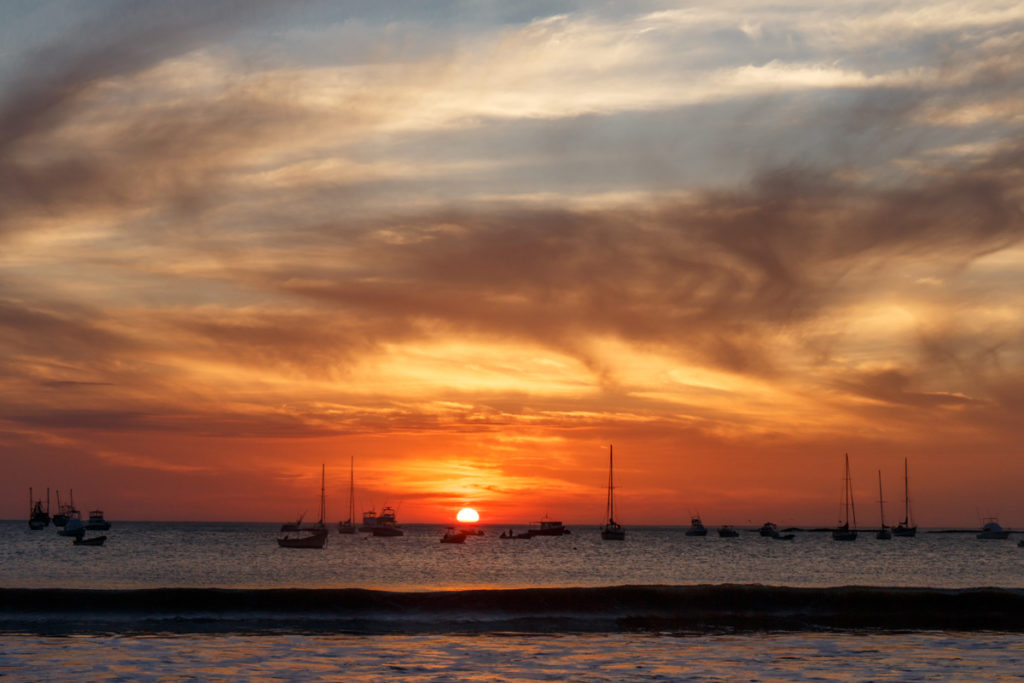 All calm on the coast as the sun falls into the sea. Photo Riderfoot

That evening, I drank wine with Allison, the owner, and talked about life in the city while we watched the sun set. I was very grateful to have found a home in all of the madness.

Day 3 began with the aggressive honking of a vehicle in the nearby village. From the comfort of my bed I could only assume the worst: a new roadblock had been built outside the village.

The first guest for the retreat had arrived the day before and we were planning on driving to Popoyo that morning, so the prospect of a roadblock filled me with dread.

I was sat in the garden attempting to meditate when one of the owners walked in for the morning shift at 8am.

“Oh, the honking? It’s the bus to Managua. Most people don’t have alarms, so they wake all of us up just in case.” 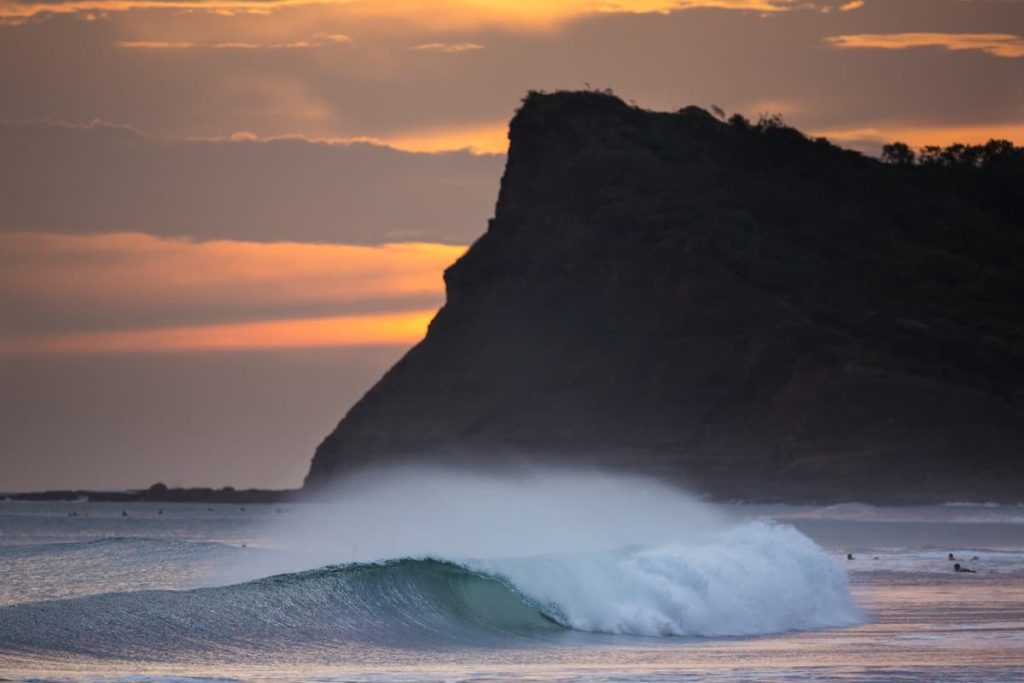 Later that morning, we climbed in our taxi and started the four hour journey to Popoyo, our original destination. The countryside was so green you expected tendrils to start pushing through the car doors; the roads were barely holding their footing in a burgeoning jungle.

And if the landscape is vibrant, the people are bursting with life.

Two hours into the journey, we came across a roadblock. We could see young men, barely in their 20s, wearing scarves across their faces and holding homemade rocket launchers. We shrunk away as we drove past, sliding down into the car seats.

But looking around us everyone else was unfazed, one moped drove through the roadblock and casually handed a protester a bottle of Fanta. The protests had become so commonplace that locals had started selling nuts to drivers stuck in the queues. 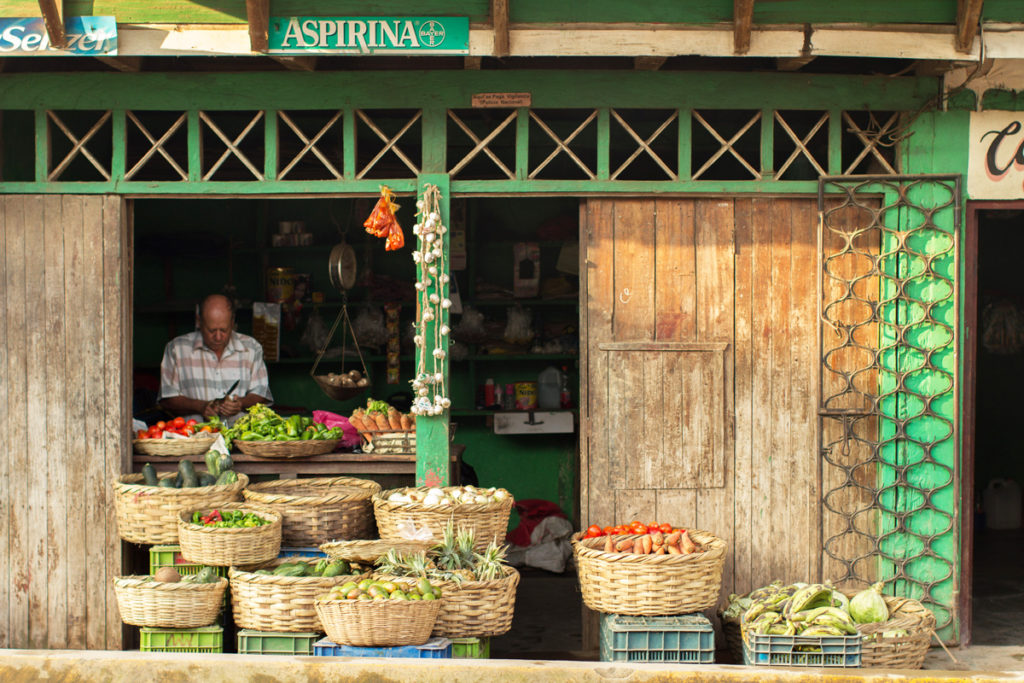 A Nicaraguan vendor sells vegetables by the side of the road. Photo Adam Cohn

It was even more confusing when at a second roadblock, we heard the pop and whistle of these homemade mortars, some of the masked kids scattered in the confusion, and still the old women sat back in their chairs at the side of the road, laughing at the furore. Our taxi driver (it was that total babe Steve again) sped through the roadblock in the middle of the chaos, and still the Nicaraguans smiled.

We finally made it to Popoyo which seemed like a world away from the chaos, the surf town is nestled in quiet farmlands where kids ride to school on mules and the only roads are dirt tracks. Finally our crew of travellers could begin the relaxing retreat. 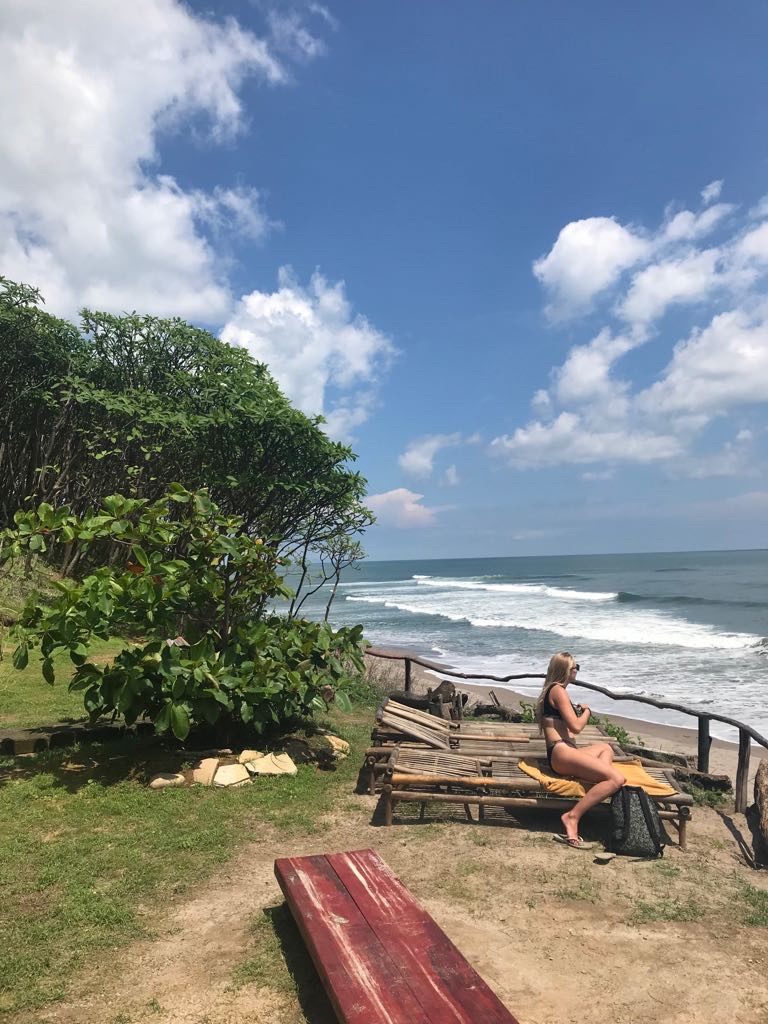 Elly relaxing after a nerve-wracking journey.

The journey back to the airport turned out to be more hazardous than the initial trip, with barricades made from dug-up paving stones blocking almost every road. In the last few days the situation has worsened, the areas around Popoyo have run out of fuel and the number of people killed nationwide has grown to 130.

Nicaragua remains a beautiful nation of kind and smiling people, but as our beloved Steve explains it: “we need this change but we hope it will be over soon.”

Elly is a Bristol-based yoga teacher and an ambassador for Folklore Surf.

For more information on her retreats and classes go to www.swellyoga.net or @swell.yoga