Home » The Definitive Guide To Raglan, New Zealand- One Of The Southern Hemisphere’s Best Surf Towns

The Definitive Guide To Raglan, New Zealand- One Of The Southern Hemisphere’s Best Surf Towns

Covering everything from the history, to kitting out your camper for cheap, here's our definitive guide to one of the Southern Hemi's best surf towns...

“The rides so long it’s ridiculous” explains Bruce Brown, as Robert August trims along a sumptuous looking wall in Chapter 17 of The Endless Summer.

“You go out surfing for the day at Raglan and you get two rides,” he continues “one after breakfast and one after lunch. If you try for three you starve to death.”


It’s hard to imagine a wave more perfectly suited to the boards and style of the 60’s than the peeling lefts of Manu Bay, the furthest inside of Raglan’s three world-renowned points. Never-ending lines roll lazily down the cobbles, walling up and crumbling at the perfect pace for swooping carves and feet-together pocket rides.

It’s no surprise then, that the break was already being surfed regularly by the early 60’s- just a few years after the introduction of (relatively) light-weight fibreglass boards launched contemporary surfing in New Zealand. Small groups of surfers would make the dash from the nearby city of Hamilton and the not so nearby city of Mount Maunganui to the wilderness of Waikato’s west coast and spend the weekend camped out in a shack on the point at Manu Bay. By the time the Endless Summer boys showed up in 66’ word was already spreading. According to local folk-lore, Bruce and crew assured apprehensive locals that they wouldn’t include their footage of Raglan in the final film, but once on the cutting room spool, its allure proved too great.

“After Endless Summer, we all knew Raglan was going to be famous.” recounts Don Wilson, one of the town’s first-ever shapers. 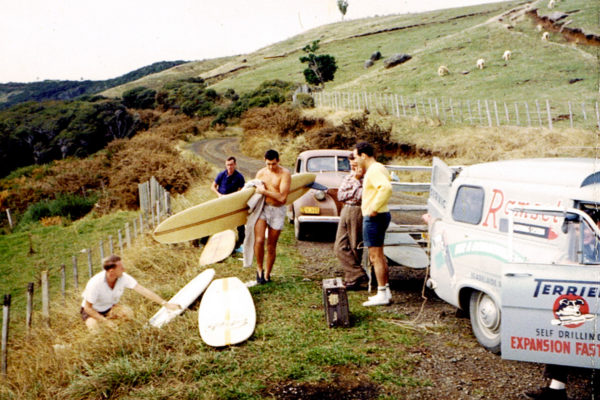 Fast forward 50 years and the exact same qualities that so satisfied those early wave riders have seen Raglan transform into one of the southern hemispheres most visited surf spots. While the town centre itself has changed a lot since the 60’s, it’s those same long friendly walls that see everyone from German intermediates to world-class rippers flock to the points in their droves.

Nowadays, up to twenty-two thousand visitors a week descend on the small seaside town in the summer months- a staggeringly high figure considering the permanent population is just 3000, with many, if not most, there for the surf. Unsurprisingly this boon has come with some issues. From heinous crowds, which according to local police provoke regular incidents of surf rage, to soaring rents, which are pushing local people out. It’s worth holding all of this in the back of your head if you visit and try to be as respectful as possible. 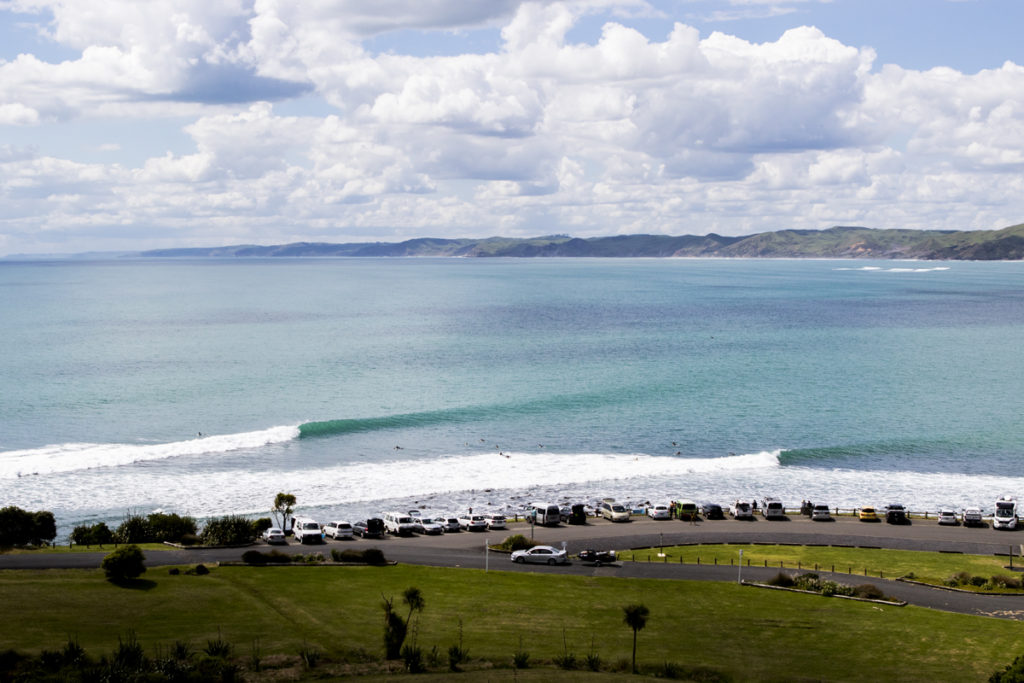 Unlike many of the world’s best left-hand points, Manu Bay is still super fun at shoulder high, with light onshores. Photo @lugarts

Whether the sort of people who travel places and don’t show respect would have done, had they only read an online article imploring them to do so is up for debate, but we’re going to reel off the standard advice required for a frictionless trip anyway. Respect the local people and customs, follow global surf etiquette (refresher course here) and perhaps most importantly; know your ability in the surf and choose a spot and take-off point accordingly.

Much of the coastal land around Raglan is private, with limited access, so tread carefully and observe no trespassing signs. Whereas screeching ‘right to roam’ and legging it will generally get you off the hook with an angry farmer in Britain, the same is not true in New Zealand, where private property is taken very seriously.

With that out the way, here’s our definitive guide on how to get there, where to stay, where to surf, and where to head for a post-surf feed to help you get the most out of your trip.

Just a couple of hours south of Auckland, Raglan can be a good destination to start a New Zealand road trip. You can either sort out a car or camper in Auckland and make the two-hour drive, or spend four hours on a couple of busses and buy your wheels on arrival. There’s usually lots of second-hand vehicles for sale in the town and prices will generally be a little cheaper than Auckland. If you need to kit out your newly bought camper, there’s a two dollar store in town that sells everything from whistling kettles to fishing gear. 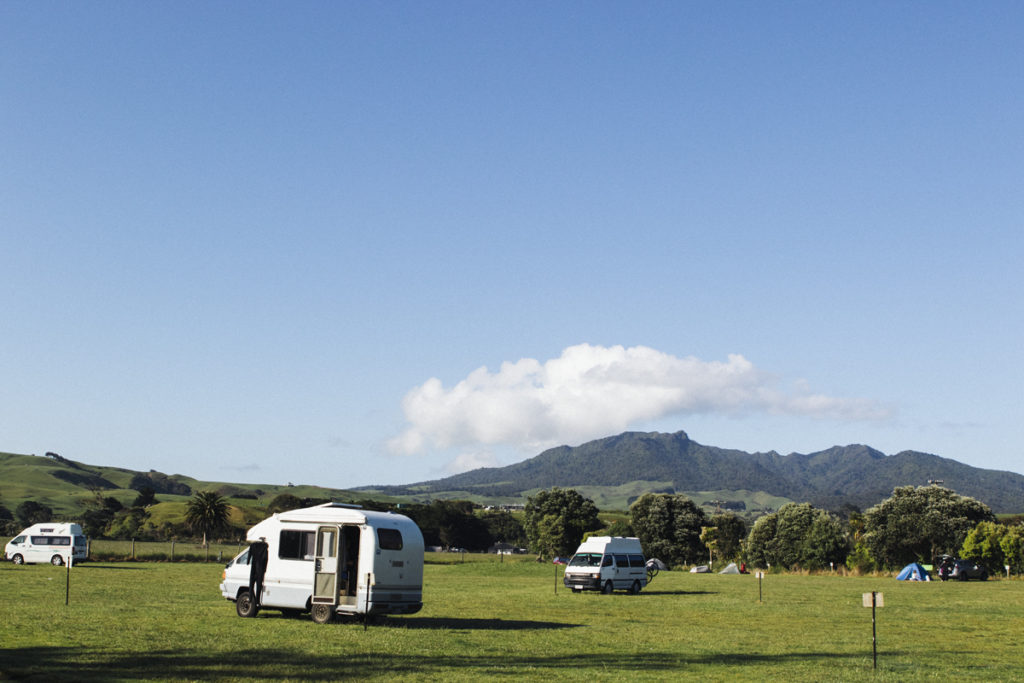 If you’re camping on a budget, Te Kopua Whanau Camp is a great choice. It’s in a beautiful location, a 10 minute drive to the points, a pretty easy 20 minute walk into town and an absolute steal at $10 (£5) per person, per night, plus another $1 for a hot shower.

If you want to go a little more plush or need a powered site, Raglan Kopua Holiday Park has a few more amenities including a kitchen, laundry and TV lounge and is also reasonably priced at $22 (£11) per person, per night (for an unpowered site or $24 for a powered). If you aren’t camping, Solscape is a good choice, situated just a short walk from Manu Bay and Ngarunui Beach.

It’s not just the quality of the waves that has installed Raglan but also their accessibility and consistency. Three perfectly mechanical points catch wrapping south westerly swells, with the mountain valleys channeling the winds to provide semi-clean waves year round. All the points are offshore on a SW, but are fun with light winds from any direction. The furthest north and most high performance of the three is Indicators, which offers fast rifling walls that serve up a sequence of critical sections that barrel when it’s offshore. There’s two take off spots; outsides and insides, which link up on good days. The lineup is highly competitive and mostly dominated by skilled locals. If it’s firing, it’s unlikely your going to get many waves out there.

The next point is Whale Bay; the mellowest of the three, offering up fairly cruisey rides, although there is a nasty exposed rock in the middle section of the wave you need to watch out for, particularly on smaller days. Furthest south is Manu Bay; the most popular among travelling surfers and intermediates.

On small days it’s a long mellow left hand wall, which alternates between fat and bowly sections, perfect for cutties and lazy trimming down the line. On bigger days at low tide Manu serves up the best barrel in the region right off the take off, as well as steeper sections which can race 300m into the bay. On super rare occasions it’s possible to link up all three points; taking off at Indicators and surfing the 2km right to Manu Bay, although the more achievable link up from Indicators to Whale would be still be something to write home about. The beaches to the north and south of the points pick up smaller swells, meaning there is almost always something fun to surf. 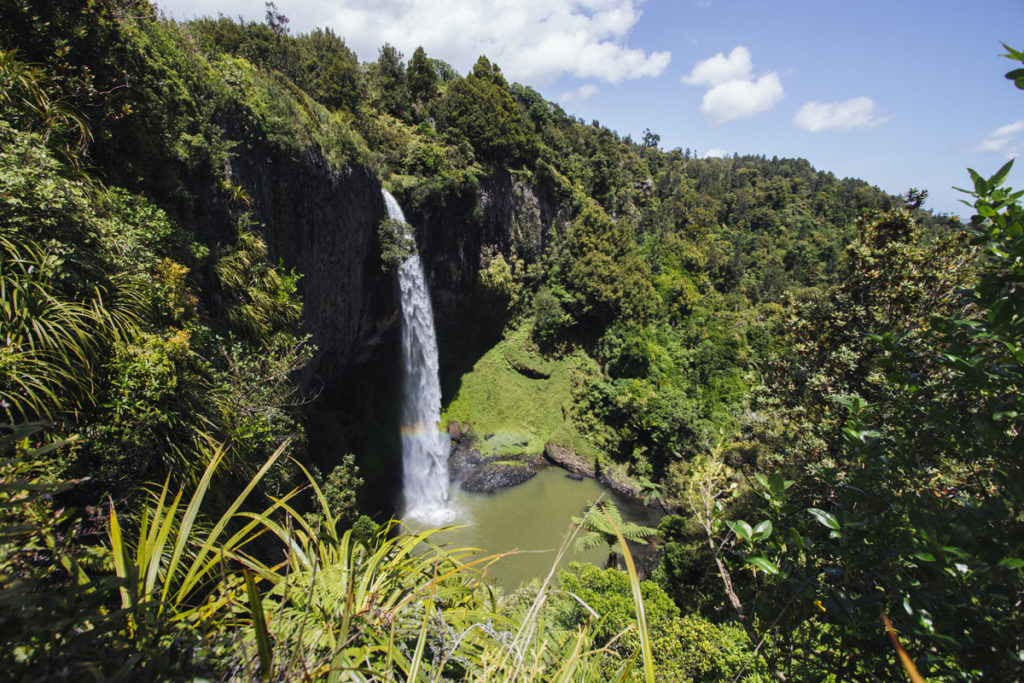 If it’s flat, or your legs need a rest, the scenery to the north of Raglan, including the iconic Bridal Veil waterfall, is well worth a visit. Photo @lugarts

The town has two bakeries- although not in the European sense- they serve everything from NZ pies, through freshly made sandwiches to full fry ups. The Raglan Bakehouse, closer to the harbour has a slightly better rep. Raglan Roast does excellent coffee and food, while Solscape’s Cafe ‘The Conscious Kitchen’ is renowned for its organic veggie and vegan options. In the evening, the central pub is a good option for both eating and drinking, or for a more chic dining experience, try Orca on the harbour. After that, Yot Club is the only late-night bar, although another one is currently under construction just up the road.