Welcome to Bantham, Devon: The Pumping Heart of South Coast Surfing Bantham is a great wave in a jaw-droppingly beautiful location

Bantham is a small idyllic village, behind a beach, nestled in the middle of ‘The South Hams’; an area nicknamed ‘The Shire’ after the home of the Hobbit. This is no mistake; the area is simply breathtaking.

I lived abroad for a number of years and came home one quiet September day to find myself wondering why I had ever gone away. The place was, without doubt, more stunning than any I had seen in those years away.

The beach sits on the Atlantic facing coast between Salcombe and Plymouth, with the famous coastal towns of Dartmouth, Totnes, Newton Ferrers and Noss Mayo only a few minutes away. Along with Bigbury and Burgh Island, Bantham sits at the most seaward point of a stunning wood edged, sand bottomed valley sculpted by the River Avon. 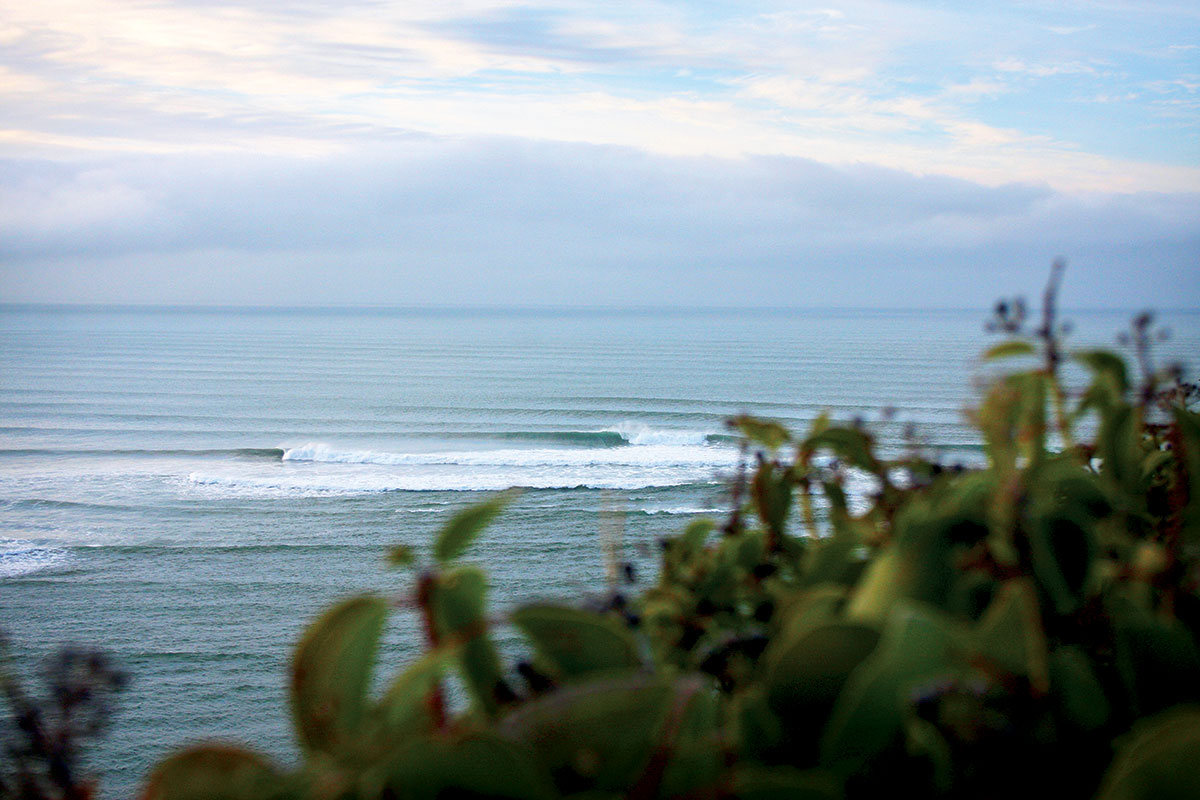 Before reaching the sea, the river, just behind the ‘Ham’ (Bantham’s Nature Reserve) has created a quintessentially ‘Shire Like’ small harbour; home to Bantham Sailing and Water-ski Clubs. Burgh Island, north west of the line-up is home to the similarly named Art-Deco hotel of international renown which was the playground to the rich and famous in the 1930s and still attracts its share of high profile guests.

Bantham is undoubtedly the home of surfing in South Devon and has been so since the birth of this sport/art form/lifestyle in the UK.

Bantham Surf Life Saving Club was started in 1960 and is still the local hub for Bantham surfers. The clubhouse provides members with unbeatable views of the line-up and acts as a grommet crèche for local up-and-comers in the warmer months.

Yours truly spent every day hanging out at the club from age 12, immersing myself in all things surf and spending marathon jaunts in the ocean on all types of craft. Bigbury also, now has its own hangout at the Connolly’s Discovery Surf School.

Bantham is a great wave in a jaw-droppingly beautiful location

Since the 1960s Bantham has forged a key individual role in shaping British surfing and its influence cannot be underplayed on the wider scene.

In the early days it was rumoured that Prince Charles was seen being chauffeured to the beach with his surfboard when he was at Dartmouth Royal Naval College. At this time there was a hardcore of local surfers, many of whom still surf today, although some have taken to the less crowded option of sailing to fulfil their ongoing love of the ocean.

History and family play a major role here; most of the top surfers now are second or third generation Bantham locals, whose parents were equally pivotal in their respective eras. It is regularly the case that these generations are in the sea together; so don’t burn the grom, otherwise his father and grandfather may come after you! 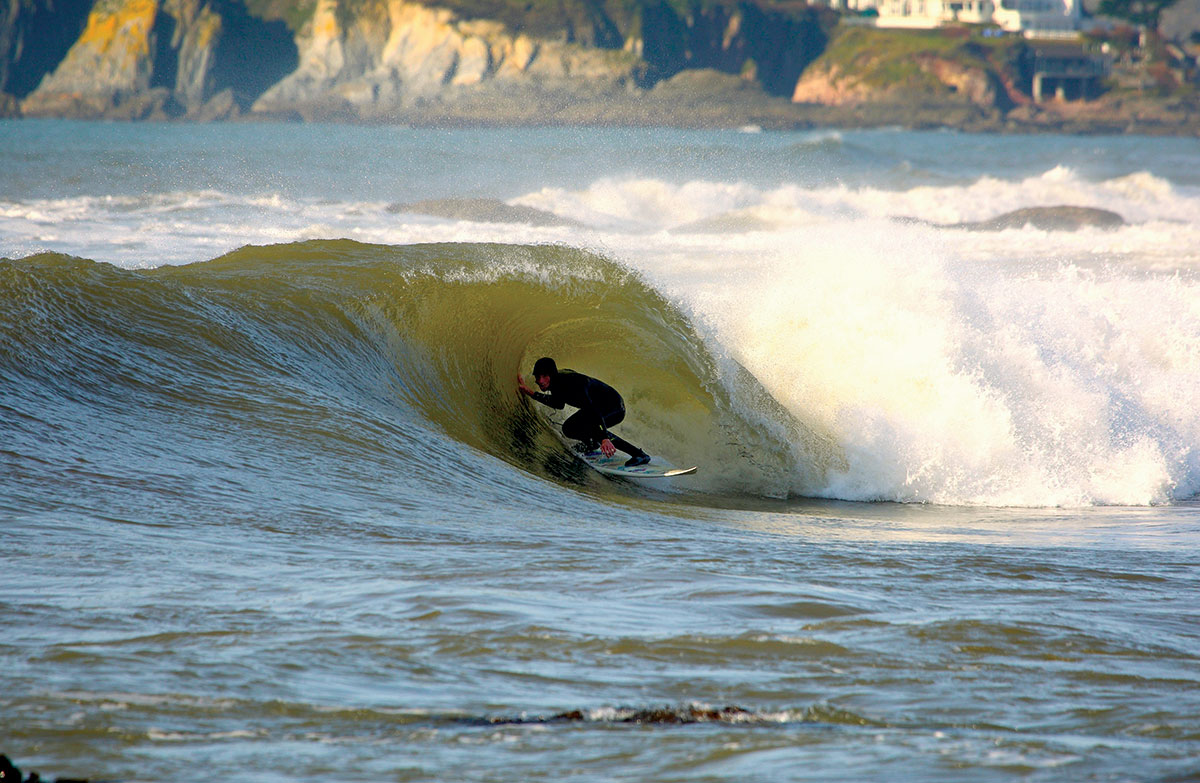 Because of its locale, the Bantham crew is drawn from a wide geographical area – namely Plymouth, Torbay and the South Hams. This makes for a diverse and eclectic mix of locals as well as a large number of very good surfers always in the sea.

To avoid listing and, therefore, being on a hit-list for forgetting people, I am going to pick a few notables who have been the most highly influential performers in the area. Since the dawn of the contest era, Bantham has always had local surfers at the forefront.

Malcolm Findlay was Scottish Champion numerous times and is renowned worldwide. Mark Capps also was at the top of the British scene for many years and is still a top rated, highly talented regular, now coaching his young son Noah to a similarly high standard. Then came my generation with Eugene Tollemache becoming English Champion, Martin Connolly putting in great results at British level and yours truly competing at British and European Pro level for many years.

The next crew came up in the media generation, with Matz Ginman-Trout gaining great recognition with his aerial assault, barrels and slab exploits, and Gary and Danny Wells getting great UK Pro Tour results and coverage. Now there is a new crop of younger crew showing real promise; Ellen Harding is in the British Team and her younger brother, Joe, is showing serious ability. All of these top surfers will be found in the sea together on any given day which is a real privilege and attests to the enduring appeal of the place and wave.

Behind all of these top level performers are swathes of red hot local free-surfers who have travelled extensively and constantly blow up. 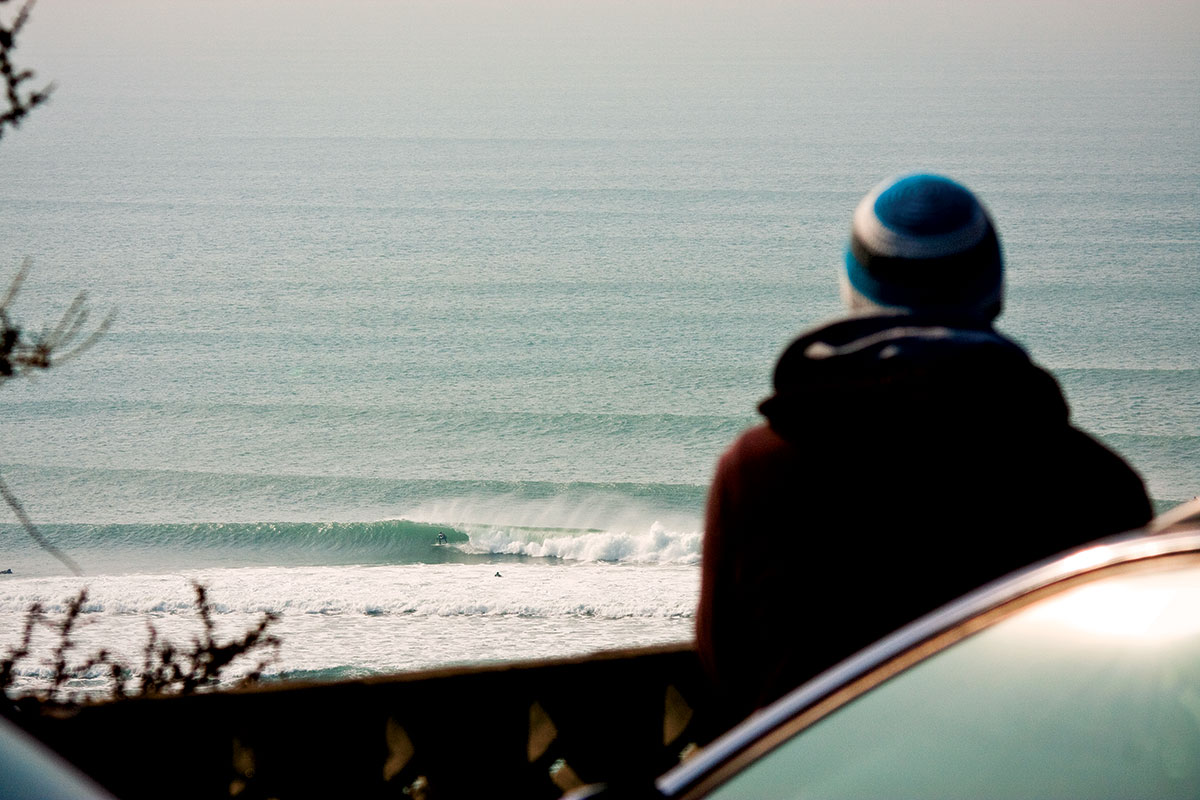 The Wave and Conditions:

Bantham is a surprisingly consistent swell magnet, but the waves and quality are highly dependent on the sandbanks. Being at the head of a river these shift all the time and will be here today and gone tomorrow. To get the place at its best you have to be seriously on it. You often get one hour that is world class followed by five that are dross.

Predominantly there is a peak towards the left known as ‘The Rip’ and, to the right, a right called ‘The Rivermouth’. The Rip tends to be an A-Frame peak with a longer right and rampy left, but can also shift to be just a right or non-existent. If the fickle Rivermouth breaks; it will inevitably be a very fast, long, rippy, shifty, hollow, sand-dredging right-hander.

There is always a very strong rip going out to sea by the rocks on the left which you can’t paddle against and incredibly strong cross-beach currents when there is any significant swell running. Because of this the place is absolutely not for beginners from mid to low tide. The best thing is to be aware of your limitations; this is a serious wave with shifting banks and heavy currents. 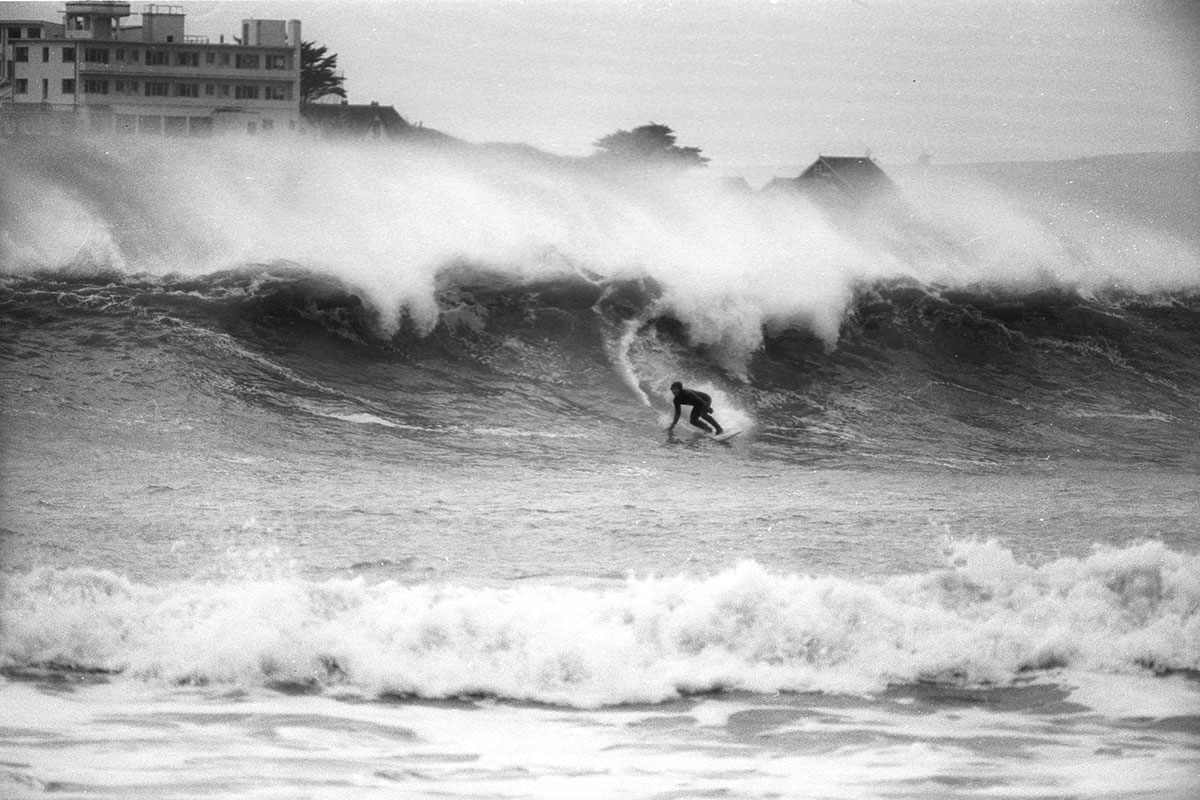 Because of the fact that Bantham has such a large catchment area it is always crowded. Moreover it is always crowded with very good local surfers. 30-60 people on one peak is considered the norm. With it being the focus of surfing in the area it is a high performance centre making the atmosphere in the water highly competitive.

Every wave, turn and mistake is given the once over and judged by numerous watchful eyes. Notable moves and mistakes are usually the talk of the pub within hours. On that note; there is a great local pub in the village called ‘The Sloop Inn’ with top notch beers and food. Being seconds from the line-up, this is good if you need a pick-me-up, but not so good if you have spent all day burning the locals. 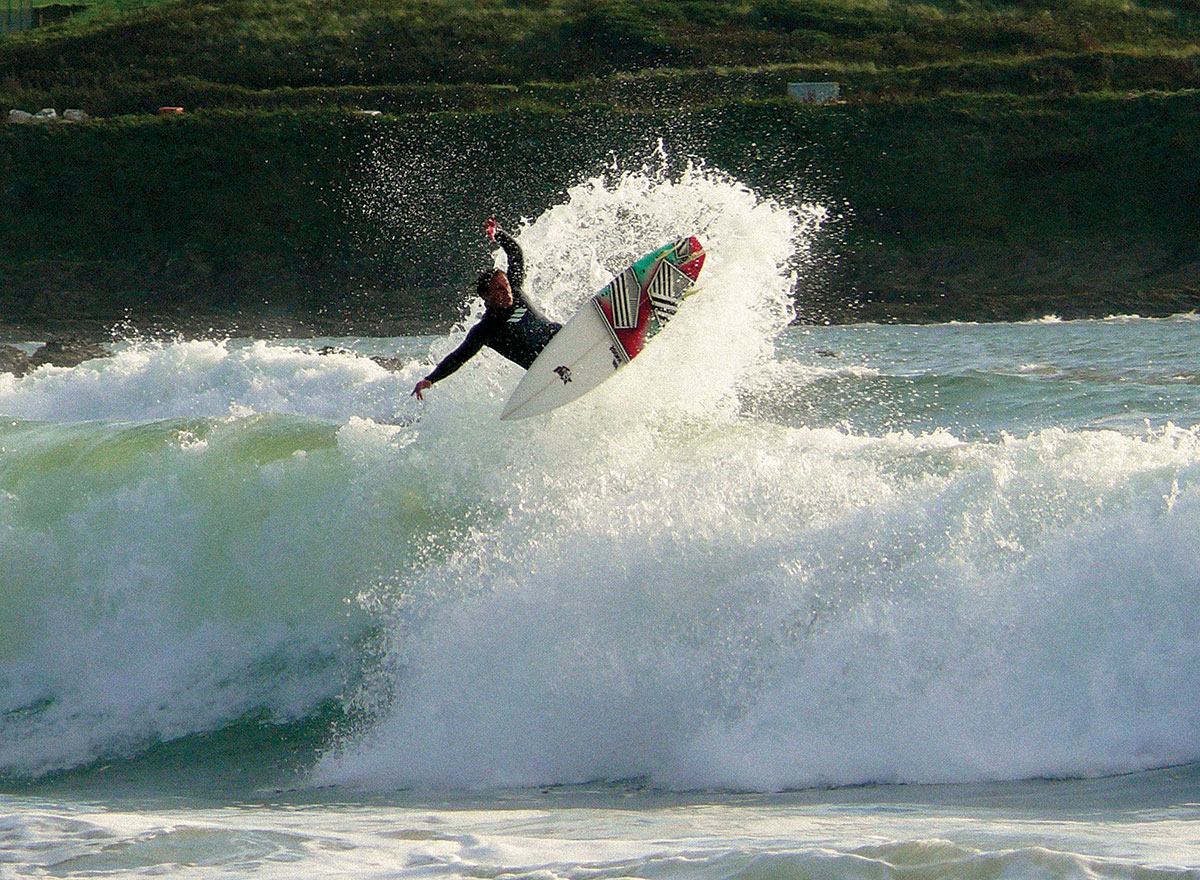 The other side of the intensity and crowd situation is the fact that, because it is the local focus, a few great local surfing businesses have flourished. Voted No.1 Young British Shaper; Luke Young Surfboards is minutes away. Magic Seaweed have their base and factory outlet in Kingsbridge. Tri-Ocean in Churchstow is a good all round surf shop. Discovery Surf School in Bigbury has a great reputation and huge range of tuition. And Bantham Surf Academy is the onsite surf school owned by the Renaud’s.

Bantham is a great wave in a jaw-droppingly beautiful location. If you have a surf here and find it uncrowded and with good banks you will feel that you are the luckiest person alive.

This article was originally published in Wavelength issue 216. Be the first to get our articles in print and online by subscribing here.