Welcome To The Severn Bore: The Art Of Riding Britain’s Longest Wave - Wavelength Surf Magazine - since 1981

Home » Welcome To The Severn Bore: The Art Of Riding Britain’s Longest Wave

Welcome To The Severn Bore: The Art Of Riding Britain’s Longest Wave

“After he’d done about 30 turns, he looked over to me and shouted ‘what happens next?’ I told him to relax, he had another hour to go!” Sat in an inflatable boat in the middle of an eerily calm river, the man at the helm, Duncan Milne, is recounting the tale of when Californian surfer, Jon Rose, came to surf the Severn Bore on a tiny twin fin, back in 2006.

Waiting for a tidal wave to appear out of the mist, no matter how small, feels unnerving, so the anecdotes from the man who has lived on the river all his life, and now owns a marine surveying company, are a welcome distraction. Jon Rose is a free surfer who had set his sights on surfing the bore, and contacted the river legend, Steve King, to help him and his photographer be in the right place at the right time on this fickle and unique wave. With Steve’s knowledge and Duncan’s expertise, Jon was scoring steep, clean faces on one of the best bore’s there had been for years, but whilst Jon, Duncan and the surf photographer were busy racing from bank to bank in the boat, they hardly noticed the fact that since he first popped up miles downstream, Steve was still riding the same wave.

He kept riding it until he ran out of river. Steve King rode the same wave for an incredible hour and seventeen minutes, setting a new world record for the longest ride at 9.25 miles. But right now, on this misty morning, his mind was elsewhere, he had just spotted the bore.

The River Severn winds its way up through Gloucestershire from the Bristol Channel for some 220 miles, funnelling into a series of meandering bends that pass through picturesque country villages and farmland.

The tidal range of the Severn Estuary is one of the largest in the world, with a difference of almost 50 feet during the biggest tides of the year, and it is this tidal surge from the mass of water rushing upstream before high tide that creates the natural phenomenon of the Severn Bore. As the width of the river suddenly becomes less, and its depth is no more than a few feet, the water simply has nowhere to go except up. The bigger the tide – just after a full moon and in particular the spring equinox – the bigger the wave… usually.

But there are also other contributing factors that need years of experience and local knowledge to understand and have subtle effects on the size of ‘Sabrina’, the affectionate local name for the bore taken from an old Celtic story of a local huntswoman. Railway Engineer, Steve King, has always lived by the river; his Great Grandfather ran the ferry across the Severn and he has been surfing the bore for over 30 years.

“Back then it was literally just me and my friend Dave Lawson riding it. Without websites giving star ratings, we figured out that the best bores needed a combination of a big tide, the right amount of rainfall, a south westerly wind blowing up the channel, and a low pressure that was centred right over the High Street in Cork!”

Steve jumps over the side of the boat with his board, and Angie, Alex and Ross, three young surfers who work for Duncan and are here to ride their first bore, quickly decide who will go first with the one remaining board. As the wave trundles along, just a couple of foot high at this point, we soon roll towards a group of surfers, waiting on a bank to catch the wave. There are patches of surfers dotted along the river banks wherever there is easy road access, because not everyone has the convenience of a boat – a good thing as the dangerous currents, mud banks and obstacles in the water are not something to be taken lightly, even by a helmsman with Duncan’s experience.

Soon there is a line of 10 or more surfers, all smiling and shouting to each other on the same wave. There is no drop-in rule, localism or agro on the Severn Bore, just good camaraderie.

Breaking in front of me was a perfect, glassy, two to three foot left-hander

I notice a guy riding a really strange boat of a surfboard that looks like a Moroccan slipper; “Bendy Ben made that himself for the bore. It cost him about £50 from Jewson’s!” Duncan tells me.

As the good banks come and go, we pick up Steve and race ahead of the wave to the next sweet spot, following the river upstream and finding perfect, steep right-handers, as well as gentle, mirror glass sections that peel straight through the countryside for miles.

Steve makes it look deceptively easy, ducking beneath branches, reading the right section to be on and even chucking in the odd headstand for the onlookers who line the banks to watch this spectacle. Eventually we reach the weir at Gloucester which signals the end of the bore and swing the boat round to head home.

Duncan’s house sits right on one of the early, surfable sections of the river. He tells me that he always knows if the bore will be good in the morning by the hooting from surfers as they ride past his garden at night.

Yes… against all common sense and thoughts of self preservation, people surf the bore at night. As we enjoy our post-surf tea and toast, I ask Steve where he’d advise a Severn Bore virgin to start out. “One of the most dangerous parts if you don’t know the river is getting out after you come off the wave. So I’d recommend starting at the most popular spots where there is easy access, plus it is always better to be amongst other people. On the west bank, you can catch the wave at Newnham, the Severn Bore Inn and Overbridge and still have enough time to drive between each spot and overtake the wave.”

Mike Clement, originally from South Africa, but now living in Gloucestershire and a regular face on the bore, joins us for tea. Realising that the qualities of a surfboard designed for saltwater were not necessarily the same as those needed for freshwater, Mike started shaping his own boards for the bore some years ago, and now makes his custom Wave Goddess boards for river surfers everywhere.

It’s clear that surfboards are what excites Mike, as he chats enthusiastically about Bob Simmons, the recent revival in single fin surfing and tail-shapes before we eventually get onto his boards. The square tails help when catching the often-broken wave on the river.

Very little rocker keeps the boards moving through the flat sections. Ample nose rocker prevents burying the nose as tidal surge pushes against downstream flow. But Mike’s latest inspiration comes from Simmons, giving him volume but also enough manoeuvrability to be on the right section.

I ask Mike, what would be an ideal bore board for someone who wanted to start off cheap; “I know it’s not a particularly cool answer, but old Bic boards are perfect.”

With Bendy’s £50 Jewson board and Mike’s Bic advice in mind, I decided it was time for me to buy a board and surf the Severn Bore. I set myself a budget of £50 and started scouring the surf shops.

£50 really doesn’t buy you much board these days; with nothing but an old leaking thruster within budget, I turned to the internet, carefully watching sites like A1surf, secondhandboards.com and eBay. Sure enough there were plenty of Bics for sale, as well as foamies and the odd beaten up minimal, but all were fetching £80+, and as soon as anything was labelled ‘longboard’, ‘vintage’ or ‘ideal first board’, the prices sky-rocketed.

And then, one day, I saw her. Propping up a van at a car boot sale, a megalith of plastic with no rocker, a square tail and some fighting spirit ticking all my boxes. Bartered down to £45, the late ‘60s Bilbo pop-out was a steal, or at least, it was affordable.

A month after being on the boat, and I am sat by myself on my new board, in the sunshine, in a river. The day before had actually been my first attempt, but even with moral support from Mike, a quantity surveyor at Heathrow, Anna, a writer for The Economist, and Greg, a passionate Welshman – all friends made through the social event which is bore-riding – I had woefully buried the nose and missed the wave.

I had to try again. Now, on a work day, apart from a canoeist who paddled over to warn me about the trees up ahead, I had the bank at the Severn Bore Inn to myself. Some advice; when waiting for the bore to come, your boots can collect a lot of mud which makes them slippy. 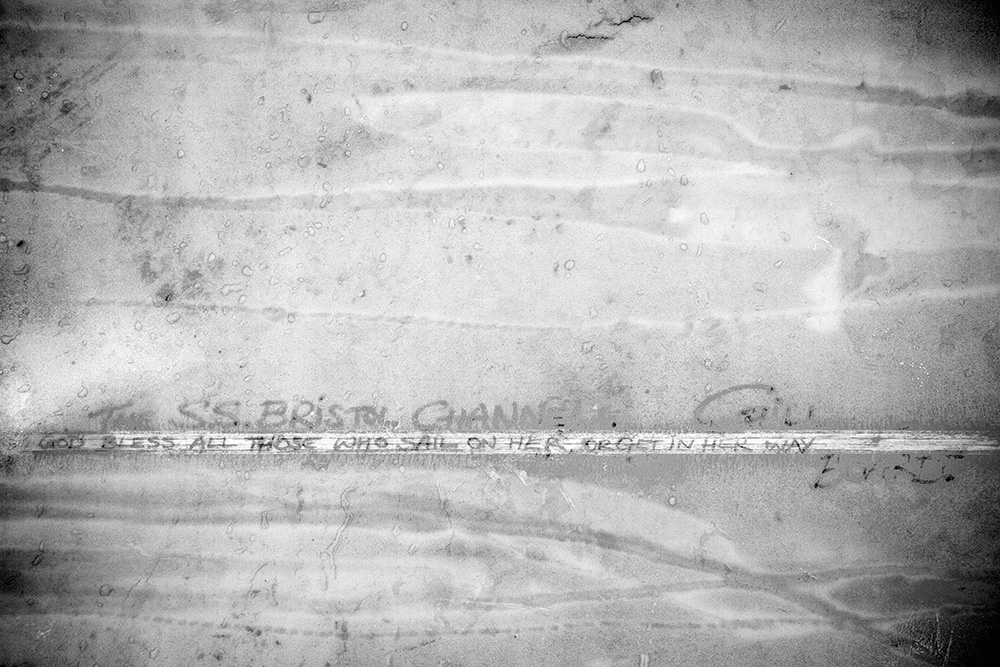 Luckily I noticed this and wiped them clean just in time for the bore to round the bend and roll towards me. I stood there stunned; breaking in front of me was a perfect, glassy, two to three foot left-hander.

I pulled myself together in time to paddle for the now-broken wave and jump to my feet. Unbelievably, the whitewater started to disappear and I found myself on the steep, clean face of the reformed left.

I couldn’t believe what I was seeing. And then I saw it, almost too late, a tree hanging out into the water and now just a few feet in front of me. Last bit of advice; when you jump off the back of a bore, remember you are not jumping off the back of a wave, but in fact jumping into a tidal surge which keeps going, regardless of boards, trees and panicking surfers.

This article was originally published in Wavelength issue 215. Be the first to get our articles in print and online by subscribing here.