Generally it involves going too straight and having the lip land on top of me, or not going straight enough and being sucked over the falls. The pig-dog is my nemesis. It is the stubbornest of beasts.

So I thought to myself, whom could I call to help me tame the unruly so and so? Who can guide me in my hopeless struggle? And I thought of one man. I thought of Aritz Aranburu.

He is without question one of the world’s finest backhand-barrel whisperers, and his primal tube instincts and raw courage make him something of an animal himself. Indeed, a current CT surfer recently described him using that very word, his tone one of admiration and awe. 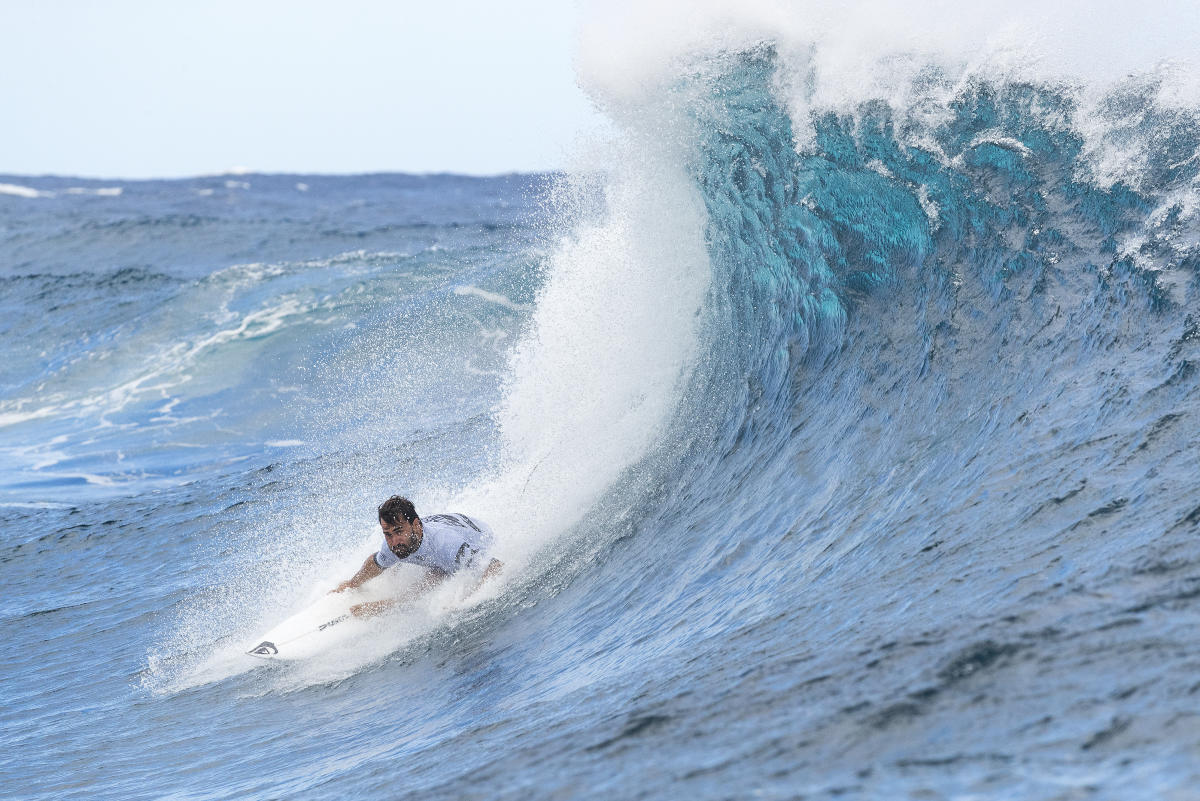 “The classic mistake is not sticking close enough to the wave. You almost have to become part of the wave…” Aritz at Teahupoo, sticking about as close to the wave as it’s possible to get. Photo: WSL/Cestari

On when to grab the rail

“You have to try and figure out whether the wave’s going to barrel from the beginning or not. If the barrel’s going to be at the start of the wave then make the drop grabbing the rail. If it looks like it won’t barrel ’til later on in the wave, that’s when you might have to take-off normally and then anticipate the tube, getting in the right posture in advance, slightly before the wave starts barrelling.

“Every surfer has a slightly different way of doing things. Some people prefer to drop straight into the tube grabbing the rail, and others like doing it the other way, going down and into a bottom turn to set up for the tube. Ultimately, though, it depends on the wave. Some waves barrel directly from the take-off and they don’t give you the time to do a bottom turn; others give you a bit more time.

“To begin with, as a general rule, I think the best thing to do is to is grab the rail from take-off. Once you’ve grabbed the rail your body compresses really small, and then you have to get your weight over towards the inside rail – you have to set your rail properly.

“Your body has to move in accordance with what the wave demands. Obviously hollow waves tend to have more power and to suck up the face a lot more, so it’s very important that you set the rail — the rail needs to be knifing into the wave, and the best way to do that is to grab the outside rail, get low, and then adapt to the size of the barrel.

“Every time you do it your vision gets slightly better adapted to the tube and where you need to be in relation to it, and how to get even deeper.”

“Some people like to have their arm behind them but I prefer to have it further forward, in front of me, because it gives me more control. If I see that the section is going to speed up I can take it out of the water, and in addition to using it for slowing down and speeding up I even use it for direction — I think having it in front of me directs me to where I want to go.”

“The classic mistake is not sticking close enough to the wave. To get barrelled you almost have to become part of the wave – you can’t follow a different line to the wave. People end up up too far from the wall of the wave, or take off without grabbing the rail, going for a bottom turn, and taking the wrong line for the barrel — a lot of barrels go to waste like that.

“Another common mistake is putting your weight too far back and then you get outpaced by the wave. I like to lean really far forwards because that way I have more control over the wave and a better vision of what the wave’s going to do, of when I have to speed up and when I have to slow down.

“The tricky thing about grabbing your rail straight from the take-off, and putting most of your weight towards the front of the board, is that it loosens up the fins, and so the fins skid out and you risk falling off. Once you get the hang of it though you can start controlling that slide.”

Anatomy of a borderline take-off

[Head to 4:15:30 in the above video.] “At Pipe, around the take-off area, there’s a kind of bubble — a big rock in the middle of the peak produces this bump on the water’s surface, and it’s almost like a backwash, how the wave suddenly rears up more aggressively just at that point. Normally when you’re surfing Pipe you try to go one side or other of the bump, either slightly deeper or further toward the shoulder, but on that wave I didn’t have priority and I caught it at the last moment right where the bobble is, which made the lip throw forward faster and more violently, so the take-off was really critical. The barrel itself wasn’t great, but the take-off was good, yeah. So in that case I had to grab the rail because if not the lip would have just launched me forward. And I put all the pressure I could on the inside rail, all of my weight, otherwise I’d have gone straight over the falls. Weight management is crucial.” 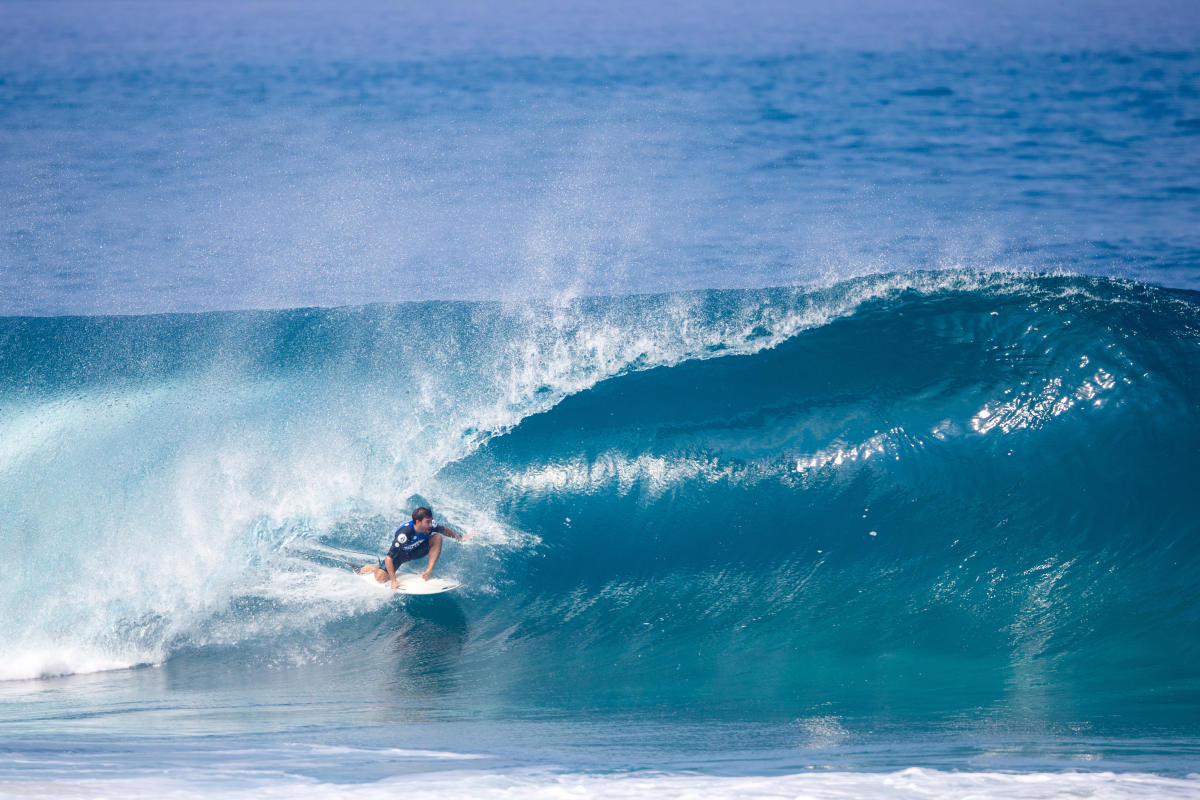 “I like to lean really far forwards because that way I have more control over the wave and a better vision of what the wave’s going to do.” Photo: WSL/Donahue

On being an animal

“Ever since I was young I’ve surfed a lot around Hossegor, which is just an hour from home, and an hour in the other direction I had Mundaka, which I’ve always been obsessed with, and which is on my backhand. When I was growing up Mundaka was like a mystical wave which the older guys were always talking about, so I just got it into my head that I wanted to surf it and surf it well.

“Some people love doing airs, and are always trying new things in the air. I just love getting barrelled, and going backhand there are all these variations — grabbing the rail, going along in layback, going hands-free — that I love to play with.”