[We’re screening the UK Premiere of Water Get No Enemy at the Wavelength Surf Film Festival Saturday 4th September, showcasing the latest and greatest releases in surf action and documentary. Tickets are now live! Get yours here.]

Arthur Bourbon kicks off his hiking shoes after a hefty 6 hour yomp on both French and Spanish sides of the Pyrenees with his girlfriend, and fields my WhatsApp call. “I’m starting to get old now,” he chuckles, “So we’ve been getting into hiking in the last few years; get off the beach in summer and get some fresh air up in the mountains.”

He’s a couple of hour’s drive from his home in Anglet, SW France, where 2022’s first professional surfing event is currently being held in sub 1ft waves. During such hot, wave starved anticyclones in August, pointing the car toward a distant peak and driving till the road ends is one of the most restorative two hour drives you can take. While today, some of Arthur’s former pro surf contemporaries are still swinging in the QS mire, he’s been on a very different path figuratively and literally for well over a decade, as a surfer-filmmaker of growing repute.

Arthur’s own background was one of many promising juniors from the French Caribbean hitting the Euro pro scene in the naughties. Still known to thread a clip, he’s made a smooth transition to other side of the lens that, alongside being a paid surfer has allowed him to pick and chose his projects. His latest film, a documentary co-directed with fellow Basque coast surfer/shooter Damien Castera, Water Get No Enemy is all about the flowering surf scene in Liberia, where former child soldiers have swapped guns for surfboards and are washing off the horrors of the country’s long running civil wars in left hand pointbreaks. 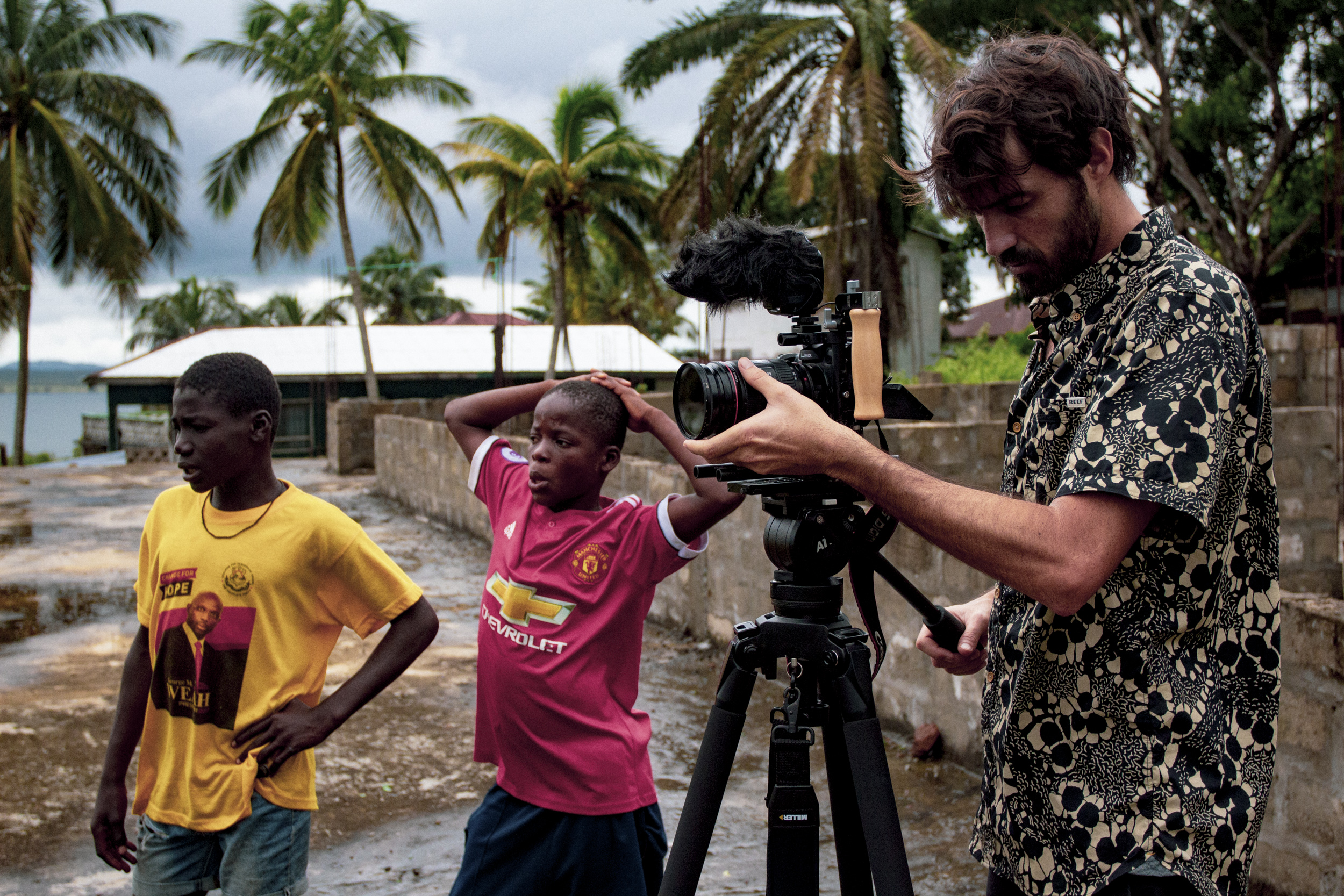 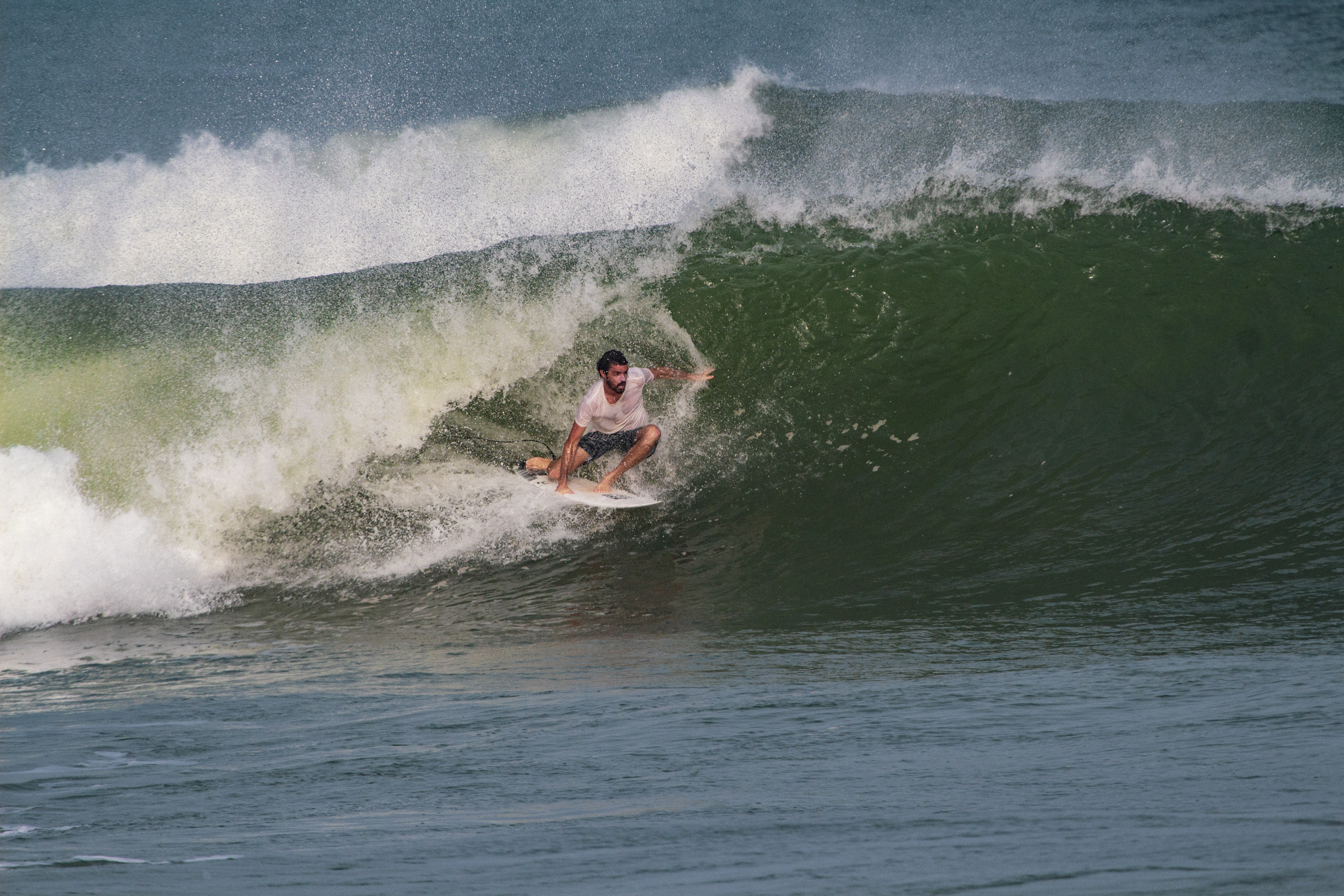 Arthur on the tools, Robertsport, Liberia.

WL: How did the transition from surfer to filmmaker come about?

AB: Making films came pretty naturally, I was on trips, as a surfer, but started shooting stuff, stills or video, and things rolled from there. When it all got pretty tough in the surf business a few years back, I had this freesurfer role that I could combine with making edits of my own travels that brought me some extra value. I got on some jobs as a camera assistant, second camera, learned a few things. I’ve done a lot of short films, but WGNE was first the full-length documentary.

How did you and Damien get involved in Liberian surfing?

We always wanted to do something together, we had a lot of the same vision in terms of themes, surf and adventure travel. He was more into mountains, hiking, places like Alaska; I was more into the Caribbean or Africa. Then one day he showed up with a picture of a perfect left, which happened to Robertsport, Liberia, and it all took off from there. We didn‘t really even know where it was on the map. When we started looking into the history, the civil wars and violence, we learned about the first generation of surfers from over there, who are about our age, in their 30’s, who were former child soldiers. We were like ‘OK let’s go meet them, surf with them, and give them a chance to tell their stories.’

So it was a surf trip first, that uncovered these compelling narratives along the way?

We kind of did this film backwards, really. Normally you’d write it first, go and shoot, according to your objectives. We just had a short window, and went; just the two of us, no crew, not much budget. We took a super light set up, one camera, and a tripod. We had the feeling the story was there, but we didn‘t really know, and we soon found good waves and a great connection with the locals. Normally I shoot video and Damien shoots stills, and for the surfing parts, we’d take turns, we never surfed together, except on rainy days when we couldn’t shoot. It was pretty intense, we just had 20 something days; we surfed every day in the morning, then spent the afternoons doing pick ups, getting B-roll, and doing all the interviews. 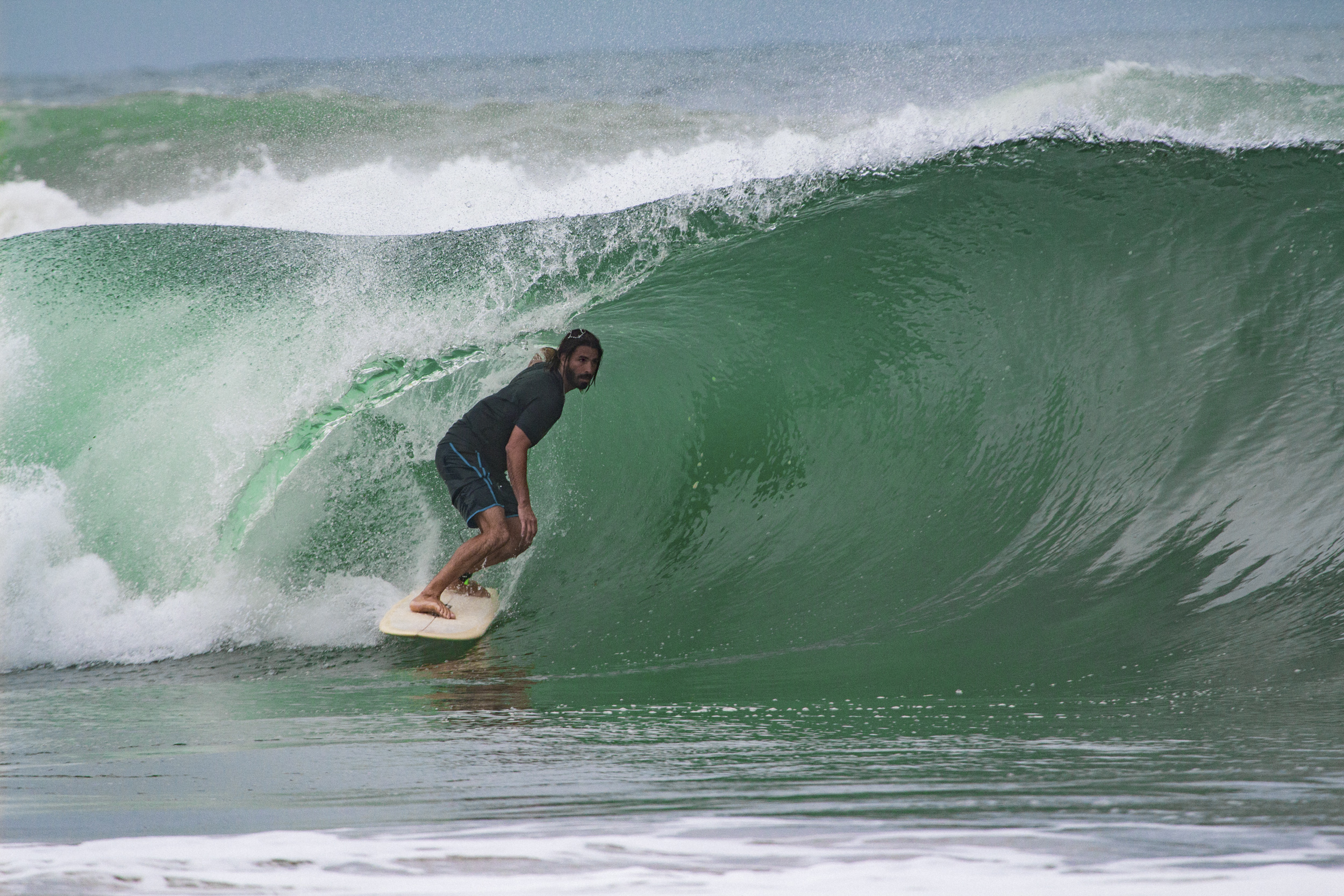 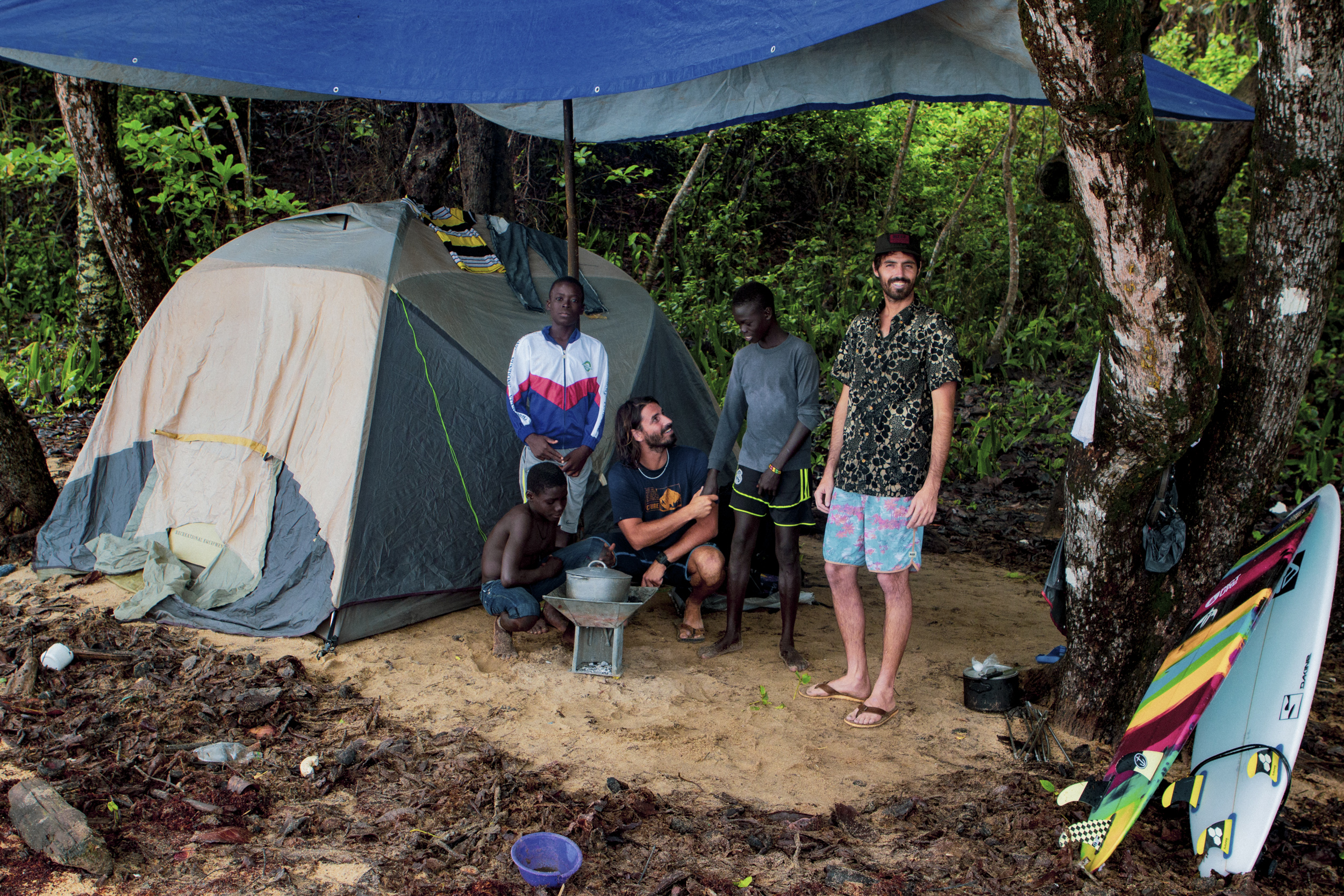 (L) Co-director Damien Castera. (R) Camp life. (Below) While being one of the wettest countries in the world, fewer than 10% of Liberians have access to safe drinking water and sanitation.

Documentaries are not known to be particularly lucrative, what made you want to go all in and make a feature?

When we came home we didn’t have money for post-production, but we knew we had really good stuff, images and story. So I edited a short, almost like an extended trailer, 5 mins or so, which was more surf orientated.  That did pretty well, it got Staff Pick on Vimeo, plenty of positive comments and reviews, so from there we were able to ask sponsors for more money. We didn’t go super deep into the atrocities, there’s lots already out there on that stuff. We really wanted to make something more about the positive side, more uplifting.

But the war is an inextricable part of the story too?

For sure. But after 20 years of brutal civil wars, there’s a generation using surfing as a way of redemption, forgiveness and healing. We wanted to tell that story, to show the renewal. A lot of the stuff you see on Liberia, and Sierra Leone too which had a similar story, is stuff to do with child soldiers, atrocities, cannibalism, and the legacy of drug addiction now. Really horrific stuff, but part of the reality of the situation. But now, there are no more child soldiers in Liberia, now there’re child surfers, and surfing is a little bit of paradise for them. We made that our focus.

Can WGNE help improve outcomes for the surf community in Liberia?

We hope so. Some American ex-pats brought surfing and equipment over there not long after the last civil war ended, in 2003. They helped set things up, but eventually they had families and left the country, and so surfing dwindled. There’s no access to surf gear or equipment over there. Right now, there’s a GoFundMe to help finish the surf club building in front of the wave at Robertsport. In the short term, the club house will provide locals a focus to the surf scene, a place to store gear, get changed. In the longer term, the hope is it’ll create bit of local employment, develop some surf tourism in the region. We were there for full rainy season, but in the dry season, our winter, it’s a pretty cool place to camp. Giving the locals some opportunities to develop surf guiding would really help build resilience into their scene, creating a little ecosystem around the surf club.

With autumn just around the corner in SW France, rather than waiting for La Gravière to fire, you’re hitting the road for something a bit different?

Yeah in two weeks or so, I’ve got another bike trip. I did it about 6 years ago, biking up the Atlantic Coast of France, but we ran out of time. So I’m doing it again, a surf adventure, meeting people with alternative lifestyles along the way. The theme is about different modes of consumption. It’s not about preaching, or trying to be the example to follow, more like just telling stories about folk doing things a little bit ahead of the curve. If I can inspire myself first, then hopefully it can inspire others. It’s one month, 1000km. But yeah, while everyone else is headed down the south west, I’ll be peddling north.

So was today’s six hour hike part of the training?

(Laughs) Not really, but it was the longest one we’ve ever done. I’m not really looking for performance as such, just cruising… but I guess I do need to be ready. 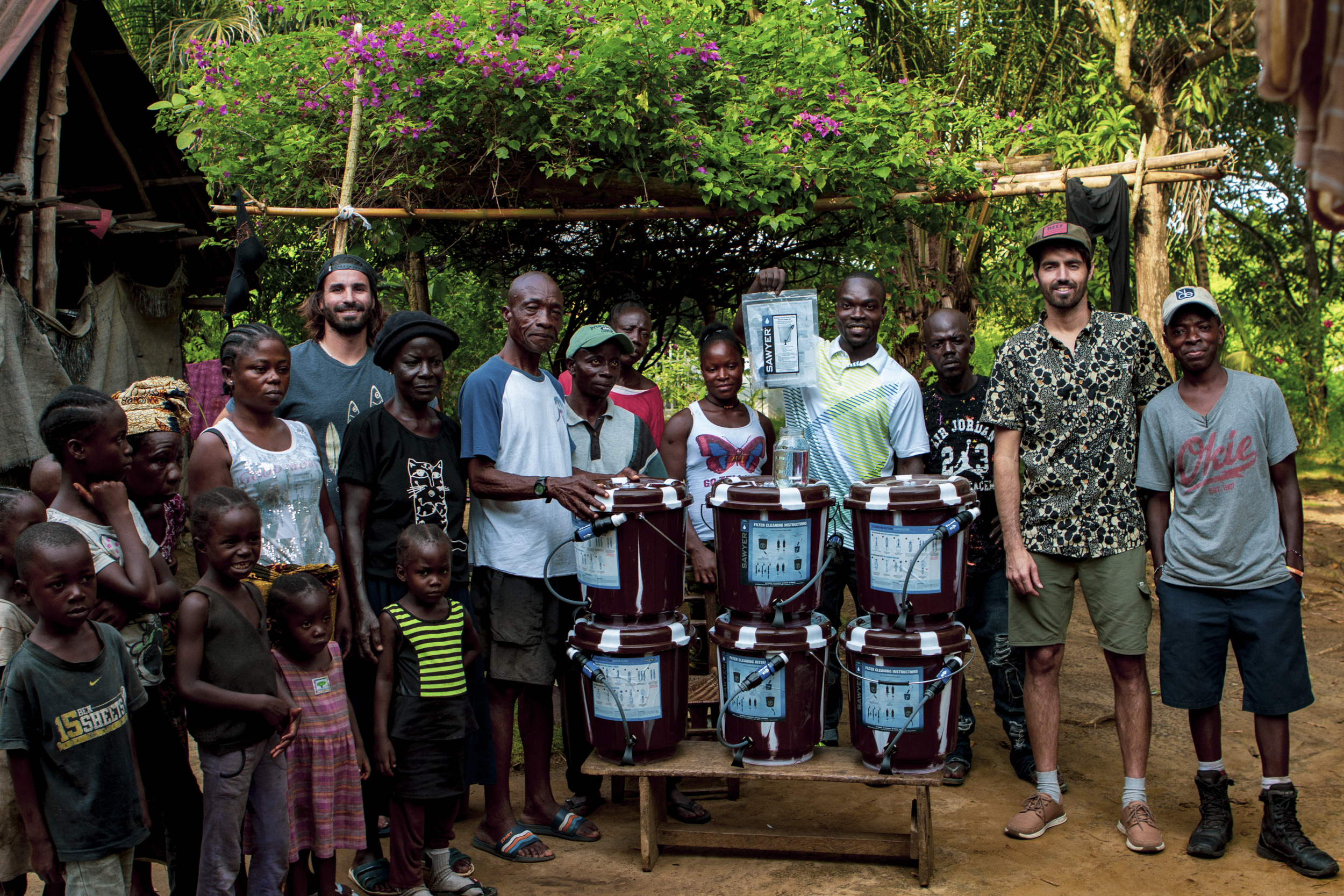 Join us for the UK premiere of Water Get No Enemy at the Wavelength Surf Film Festival on the 4th of September, or, if you can’t make it, find out where you can rent or buy the film to watch at home here.