Home » In Conversation With Taylor Steele

In Conversation With Taylor Steele

We talk tequila hangovers, learning about your best friends lives through a movie, making Pennywise famous and how to be a successful surf film maker with Taylor Steele.

Taylor Steele is unquestionably one of the most influential filmmakers in surfing history.

His movies have evolved from the 90’s masterpieces of high octane, punk sound-tracked action fests that introduced the world to Kelly Slater, Machado, Dorian et al – through to the exquisitely conceived, sumptuously filmed and emotively scored surfing travelogues he has become known for of late.

One thing that has never changed is that the calibre of surfing is always of the highest order and there is a thread of characters that have become familiar to surfers over the past 3 decades. These surfers are known as “The Momentum Generation”, and they are the focus of a brand new feature-length documentary – aptly titled …. ‘Momentum Generation’

Ahead of the start of its UK nationwide tour, we were lucky enough to catch up with Taylor to find out a bit more about his thoughts on the movie and what it feels like to step out from behind the camera and take a staring role in the main event.

Book your tickets to see the movie here. 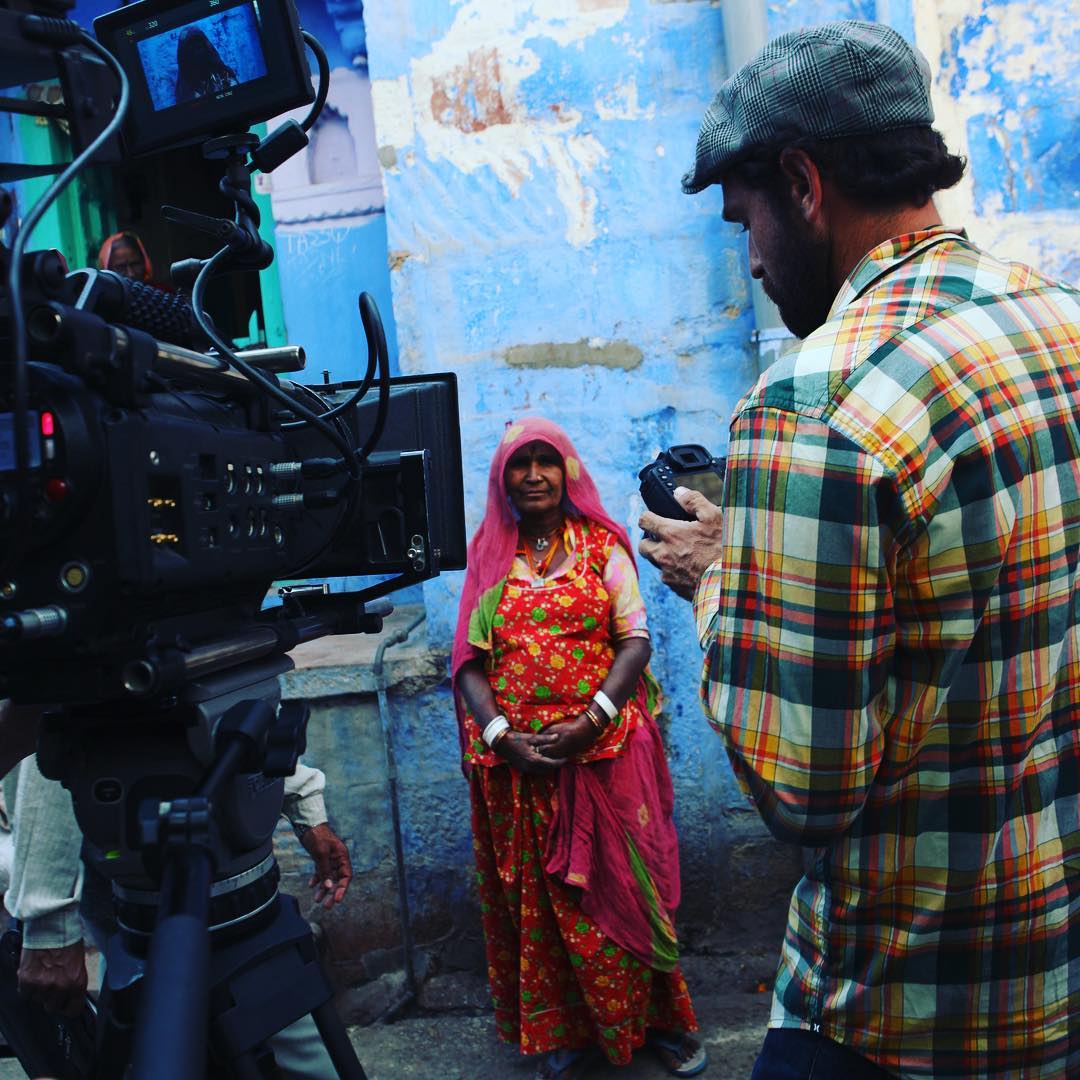 Taylor during the filming of Castles in the Sky. Photo @taylorsteele

TS: It’s all good yeah, I just got done surfing the wave pool at Waco, so I’m in a good place.

SL: Ha – I’ve heard good things about it – I might just have to pay it a visit. Hey, we just finished an interview with Machado about the Momentum Generation movie, and I don’t know how much you know, but the whole reason for the interview is because we’re going to do a tour with the movie around the UK, it looks like it’s going to be really fun. First of all Rob said to say how’s the tequila hangover? He’s going to see you in a couple days but he assumed you might be nursing a bit of a sore head.

SL: Oh goodness me. Was there a selection of Momentum Generation luminaries in town for it?

TS: You know it was pretty spacious, Greg Browning was there, Kalani Robb, Jay Larson, but the rest of them couldn’t make it, Kelly was at his wave pool, it’s hard to get everybody in the same room nowadays, but the ones that were there represented everybody else, we had to compensate.

SL: Well thanks for taking the call this morning, are you sure you’re up to it?

TS: (laughs) we’ll see about the questions you ask, but for now I’m definitely up for it. 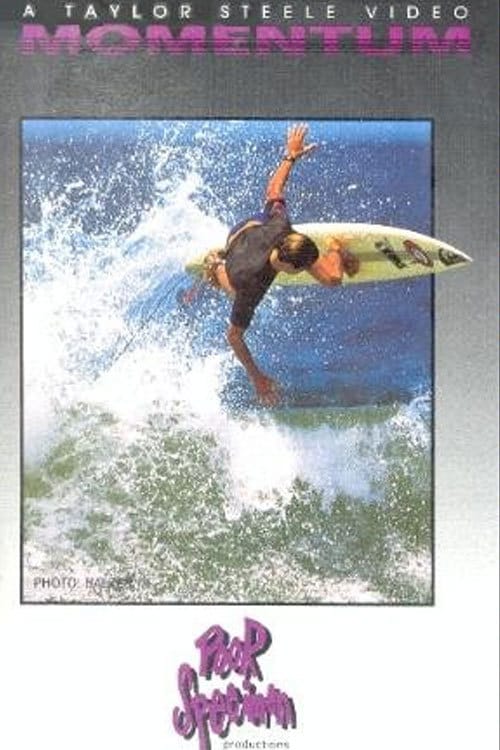 The original VHS cover of Momentum

SL: Well, let’s see how we go. So – I’m a child of the mid 70’s and I’ve been surfing my whole life, and the whole Momentum Generation, “The Drifter”, “Slater in Black and White”, that was the accompaniment to my surfing life, so to see this movie was quite striking, I cried a couple of times, it was pretty revealing.

TS: Yeah, you never know when you let your guard down and do these interviews how that’s going to come across and if anybody else is going to do it, so it felt pretty vulnerable, but it felt right, and the directors were so amazing at asking those kind of questions, that you felt comfortable with them to let your guard down.

SL: So, its Jeff and Michael Zimbalist… who are they’?

TS: Where did they come from? Yeah. They grew up in a small town, Justine (Chiara) is the person who helped rally this whole film, and she gathered a team of people, from Robert Redford to executive produce, and they found the right…

SL: … Sorry, hold on – what’s the connection with Robert Redford, does he charge Pipe when no one’s watching or…?

TS: Well he’s an outdoorsman, and he loved that spirit of friends taking care of each other, so he got behind the story when he heard it was more about that element rather than championships and all that. He really liked the spirit of the film and he probably knew the theme way before I did, because I didn’t really dive into that, I didn’t want to know anything so I could just sort of react to their questions and not try and know what the narrative was going to be. 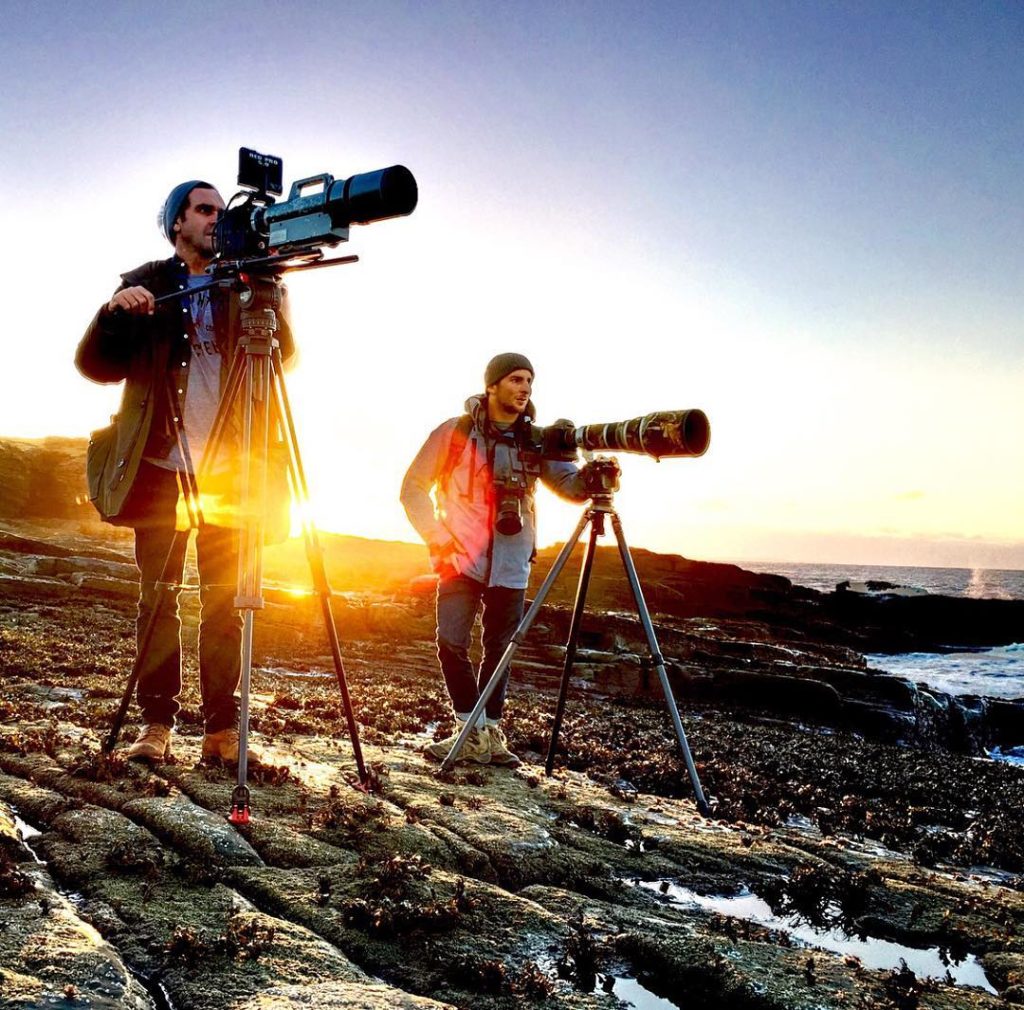 Sunset shoot on the rocks in Scotland. Photo @shanedorian

SL: How was it for you to be the subject of the movie as opposed to the observer?

TS: You know it was awesome because I could appreciate how hard it is to do what they did, telling that story. To me I didn’t think the story had a good arc because none of us were rock and roll and we didn’t have these high and lows personally in the sense of abuse and stuff, because those are the obvious things you think of when you think of a documentary, you think of tragic personal stories of someone who can’t deal with society,

SL: But on that point, I was surprised because you had Kelly with an alcoholic dad and Taylor, his dad was into drugs and Dorian and Benji and Kalani, there was a lot of actual broken homes and quite rough starts.

TS: And I learned that from the film too, I didn’t know too much on that side because we never really talked about it, as friends we never really went there and went into our troubles growing up. So I learnt a lot about Knox and these people that I never really knew.

SL: Just out of interest, was your upbringing… Rob was saying he had a very normal blue collar upbringing, were you more from Rob’s way or the other way?

TS: Mine was like Rob’s, super stable, great childhood, I’m still close with my parents, just healthy, inspirational kind of parenting. I came from that other side, a lot of the surfers would stay at my house every summer and get that sort of family foundations from my parents, so I was blessed in that sense, I had the good side of it To finish my point, I think the directors did a great job of digging deeper and making it more relatable, so it didn’t need to be a tragic story arc, it’s just about how everybody has their family issues, but what happens through a lifetime of friendships; you know a lot of highs and lows happen. 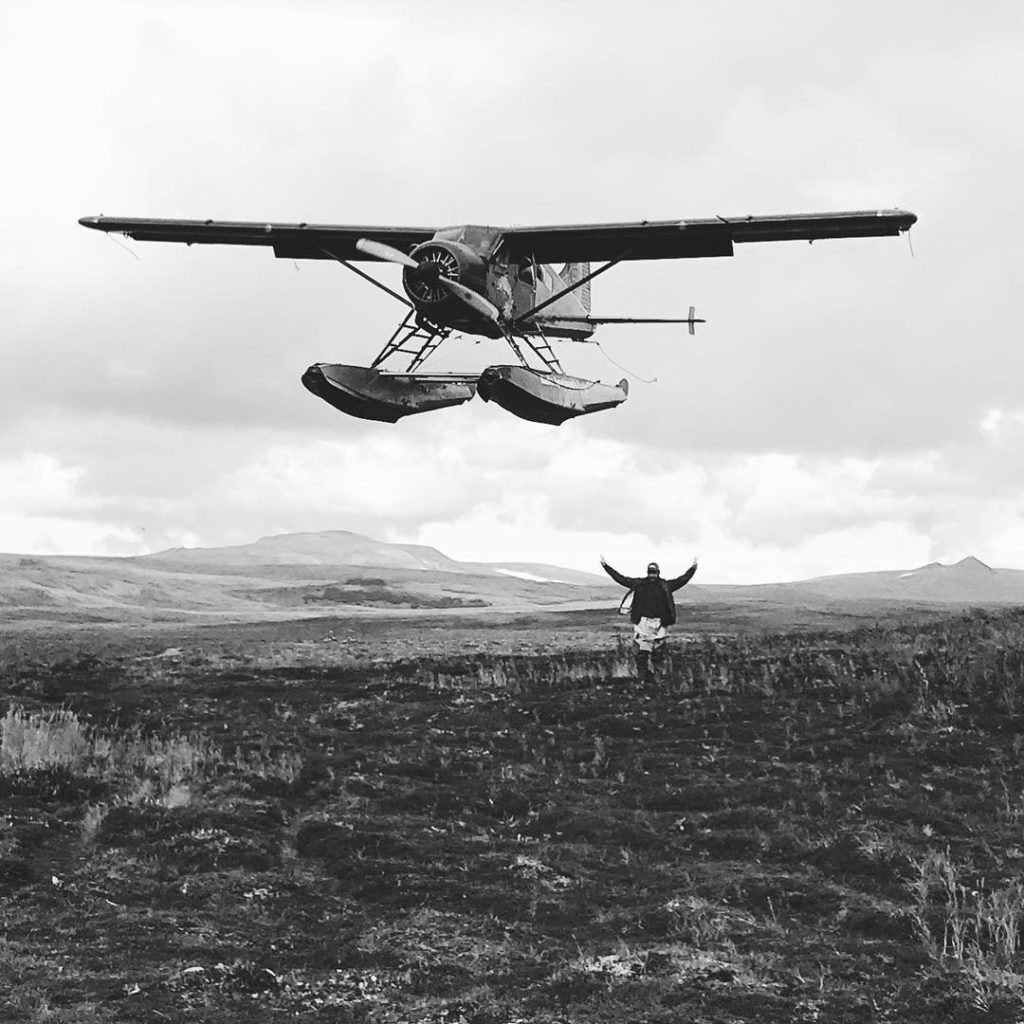 SL: It feels like those friendships are stronger now than ever, it feels like they could have splintered and almost not had anything to do with each other anymore, but it feels like a lot of it…. Rob was saying the movie was the catalyst in healing a lot of things and bringing them closer together than they’ve ever been.

TS: Yeah, there’s a lot of lingering stuff that helps, you know, annoying things that your brothers do to you that you might not have let go of and definitely the film was a way of healing that and after watching it together…, you know I’ve watched it probably three times now and every time I’ve been bawling my eyes out. I feel like I’m watching my friends go through these things and I’m re-living them, it was definitely healing and it was special to watch it together and go through that with them.

SL: That’s amazing and it come across, I was crying when I was watching it last night, I was like- this is a proper movie, it feels genuine, it feels like it touches on what it actually means it to be human.

TS: Yeah, I think that’s what gets overlooked a lot of times when you have these idols, is that they’re human, and I’m blessed because these guys are great friends too. 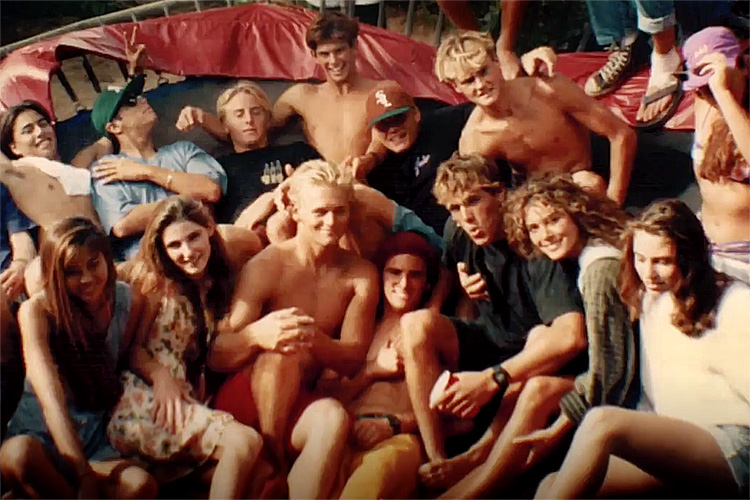 The crew on Benji’s trampoline.

SL: You’ve had an incredible career so far – Could you give any advice to any budding filmmakers that love surfing, is there a path that you could say this could work for you?

TS: Well there’s a bunch of different paths you could take, I don’t think there’s one way, I think it’s important to look at what’s out there and try and find a different way or different approach and not sort of emulate, no one remembers number two in a style, and so find your own style and then it’s like find something you’re authentically interested in as well because that passion translates out to people, either on a subconscious level or just how hard you work at it, so those would be my main things to start at.

SL: I also want to touch on your passion, and interest in music, you were one of the early supporters of bands like Blink 182, The Offspring and Pennywise who all went on to do incredible things, and credited you and your movies with effectively launching their careers – so what music captures your current mood of the last year or so?

TS: Ha, Well, I think that is being overly generous – but now, in the last year, let’s see, I worked a lot with a band called MT Warning, then I’ve seen so many good bands. I’m friends with the guys ‘Portugal the Man’. They’ve got so much variety, where they go through punk rock- they’ve got a huge gammon of sounds, because they’ve got a classically trained pianist, but the singer loves hip hop and they sing in a pop style, so it’s got all these influences. I’ve been friends with them for probably five years, so it’s been fun to watch their journey. 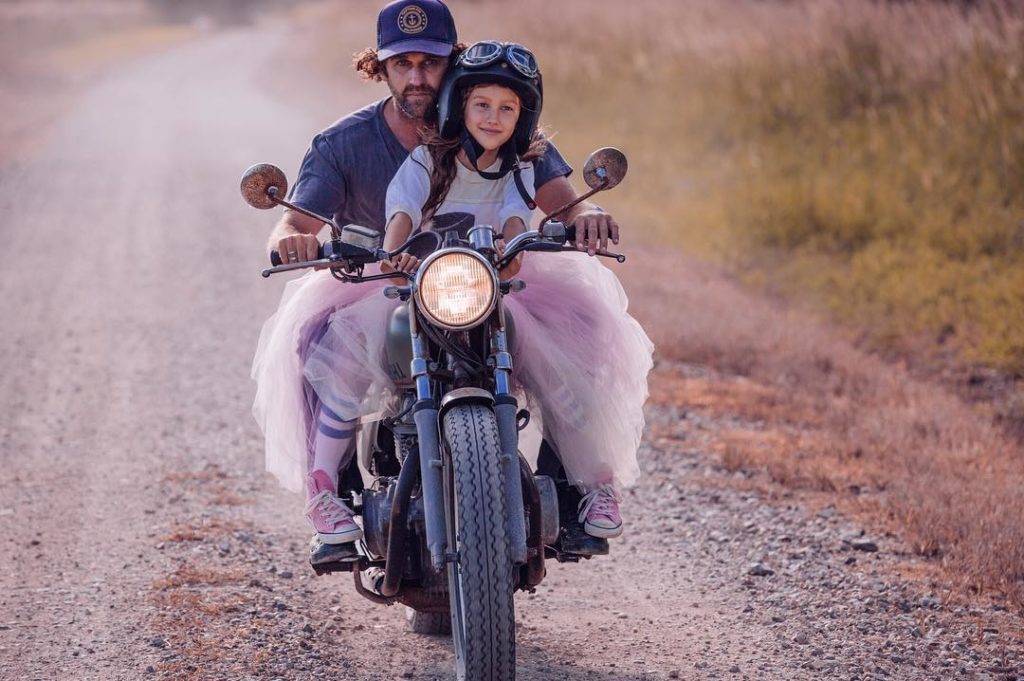 Taylor and his daughter. Photo @taylorsteele

SL: One real quick one, if someone wanted to know what project you’ve been most proud of – because I looked over your filmography and it’s staggering when you put them all side by side, the number of movies you’ve done and projects you’ve been involved in- if there’s one thing someone should watch to get an essence of Taylor Steele, which one should they find?

TS: That’s a tough one, because ‘Momentum’ would be an essence of what I was at 18, then ‘Sipping Jet Streams’ would be what I was at 30 and ‘Proximity’ is probably what I’m currently more like nowadays. So to answer your question I have hopefully evolved as a person and a filmmaker and I hope my work has too, that’s what the goal is.

SL: Sounds like a timeline worth watching! Hey, we’ve run out of time – and I’ll let you get back to nursing that hangover and working on those airs! Thanks so much for catching up and hopefully see you at some point over in Europe.

TS: I’d love to get over there, I love the energy out there… Thank you, it’s been a pleasure! Bye.

To find out more about Taylor, the rest of the momentum generation – and to possibly shed a few tears while watching an uplifting surfing movie featuring your surfing heroes – click here for dates and book tickets … it’s always better on a big screen!!