For everyday surfers, activism is the easy part. Cutting our fossil fuel dependence, not so much.

Did your News Feed light up last week with a multitude of surf folk celebrating Equinor’s announcement not to drill for oil in the Great Australian Bight?

Kudos to those behind an excellent campaign for their efforts, and their success. Not just Sean Doherty and Heath Joske, who were chief among them, but to everyone involved.

Patagonia got behind the campaign in a big way, as it has on many a campaign for many a year, surely a beacon of fighting the good fight in an otherwise indifferent brand ecosystem.

An energised #FightForTheBight campaign struck a chord not just Down Under but all over the surf world; seven seas of paddle outs with coastal communities banding together in solidarity.

Splashing water and catchy slogans like ‘Big Oil Don’t Surf’ penned on snapped 6’4” pins, from grass roots, meet in the car park at 8am right up to attending Equinor’s AGM and presenting petitions to the CEO. From local groms to pro influencers to indigenous community leaders, a sign that collective resistance does work.

This is activism at its best; engaging, inclusive, accessible, important.

The Bight is saved. So what next? A continued scroll of my feed suggested several options.

A Maldives ‘eco’ resort escape to fall off the pace? New cagoule that you don’t really need from your fave sustainable brand? Drive your SUV to sushi dinner to plan that Maldives trip, toast vanquishing Big Oil, maybe chat some Fantasy Surfer picks for the upcoming Jeep Leaderboard?

My point is, now that the surf community seems mobilised against fossil fuel extraction (and by extension, use) wouldn’t it be great to carry that momentum over? What kind of a global background does Equinor’s decision come against? If we’re against oil drilling in areas like Aussie Bight, are we against it in general?

Are we ok with a spot of say, Niger Delta drilling, you know, a couple million barrels somewhere in Africa without a tradition of pro surf paddle circles and folk with water housings worth the average annual per capita GDP to Instagram them, so long as the Twelve Apostles don’t get slicked? 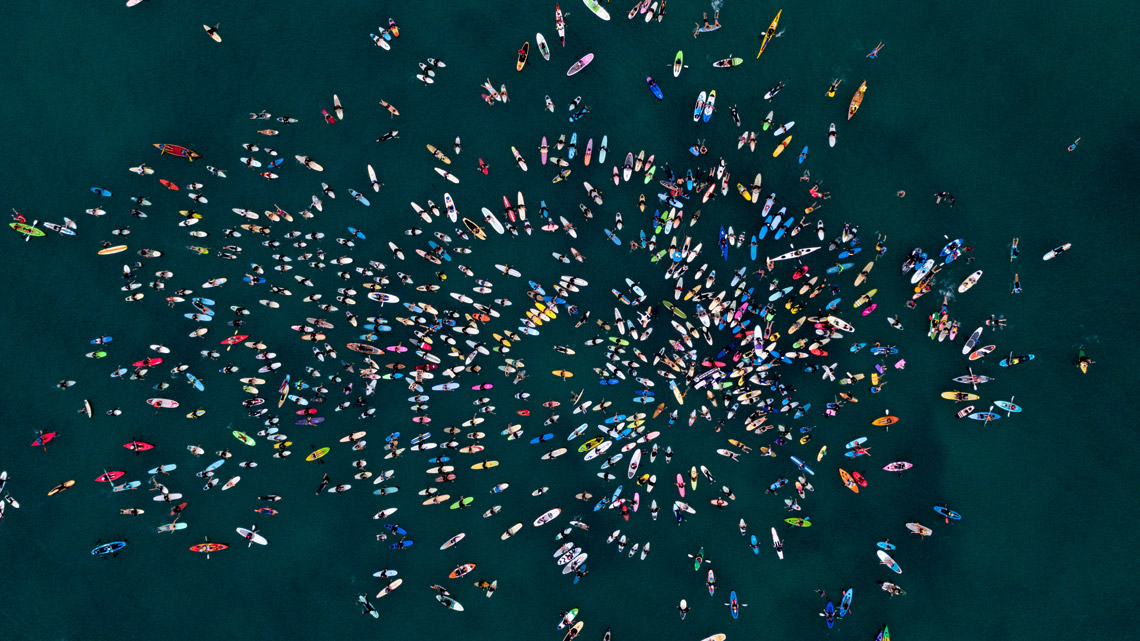 People power: we’re gonna need more of it. offshore oil drilling is forecast to rise by 5% globally in 2020. Photo: Corley

Because the likelihood is that when a company like Equinor decides against drilling in the Great Australian Bight due to resistance, it’ll simply do it elsewhere where it’ll receive less.

And our own resistance it seems, is at best patchy, at worst the preserve of first-world communities with point breaks, expensive beachfront real estate, writers forgoing their usual day rate to come up with catchy hashtags.

“The likelihood is that when a company like Equinor decides against drilling in the Great Australian Bight due to resistance, it’ll simply do it elsewhere where it’ll receive less”

In truth, the global oil scene is a rather grim one. According to Ocean Energy Resources report, 2020 forecasts for offshore oil give a 4.7% increase globally. For those not up on APR, a 4.7% annual increase means doubling the current rate every 15 years.

A recent report published in Nature stated that the existing infrastructure’s production will send us over the CO2 threshold for 1.5 dec C temperature rise by some 80 gigatonnes.

Regionally, OER give a 28% increase forecast for South America, 9% in Africa, 8% in Middle East, while as for the land Down Under, site of our recent glorious victory, offshore drilling is set for an overall increase in 2020. Meanwhile on land, LNG gas production increases means Australia is forecast to become the world’s biggest producer, surpassing Qatar.

Ah the sweet smell of success!

“According to Ocean Energy Resources report, 2020 forecasts for offshore oil give a 4.7% increase globally. For those not up on APR, a 4.7% annual increase means doubling the current rate every 15 years”

While not meaning to depress you, let’s not kid ourselves either. And this is just offshore drilling, other particularly sensitive areas within Big Oil’s crosshairs include the Antarctic, Alaska and notably Congo’s Cuvette Centrale peatlands – where 359m barrels of oil lie under a peat store of 34 billion tonnes of carbon, the ultimate climate collapse double whammy.

Venezuela wells largely lay idle due to US sanctions, but only temporarily. Elsewhere the Gulf of Mexico, Indonesia, Vietnam and South China Sea are all set for increased drilling.

As for Equinor, remember them? They’ve just been granted licence to extract LNG on good old Blighty’s continental shelf, at Mariner field, which should produce more than 300 MMboe (million barrels of oil equivalent) over 30 years.

Against this backdrop of all-powerful multi-billion dollar corporations, it’s easier, and considerably more fun, to blame the consumer. For us to point fingers at each other in a selective purity spiral; after all, our boards are made from oil, as one crude trader pal of mine points out, our wetsuits, too. Neoprene to be precise, a very mucky enterprise.

Actually, mucky probably isn’t the word. Deadly might do it.

Avoiding the tipping point in our current emergency, we’re told, requires us to do two things simultaneously; leave fossil fuels in the ground, and drawdown carbon already in the atmosphere. Both can be conducive with good surfing lifestyles, and not many of us need convincing not to be using fossil fuels, we just need the agency.

You might not be overly surprised that I’m repeating Oxford University researcher Joseph Poore’s findings from the report he published in 2019, “A vegan diet is probably the single biggest way to reduce your impact on planet Earth, not just greenhouse gases, but global acidification, eutrophication, land use and water use. It is far bigger than cutting down on your flights or buying an electric car.”

As for drawing CO2 down, that will require massively rewilding and reforesting, which again is conducive with the diet shift, bearing in mind 80% of all agricultural land globally is for livestock, despite it providing 18% of the calories.

“Unbelievably, new cars sold in the UK actually emit more CO2 than older ones . Somehow, we’re going backwards, even our cars are stupid “

But aside from switching from pork to plants, surfing needs to rediscover the general frugality that was once at its core, rather than crass consumption it’s mutated into, whether that be in clothing, gear and accessories, or the nauseating bucket lists of endless travel. Unbelievably, new cars sold in the UK actually emit more CO2 than older ones . Somehow, we’re going backwards, even our cars are stupid.

As for the solution, it’s all pretty simple really. All we need to do is change almost every aspect of how we live our lives.

In lieu of that particular paradigm shift (any day now), cranking the bullshit detector up to 11 would be one place to start.