Five incredible things to see and do in the Faroe Islands

Beyond the surf, what else is there to do on the edge of the Arctic?

On a map, The Faroe Islands appears like a sprinkling of small jagged-edged spots, floating in the turbulent seas between Norway, Iceland and Scotland.

A closer look, however, reveals one of the most vast and un-developed landscapes on earth. In recent years the islands have joined the bucket lists of intrepid travellers from around the world, who journey there to marvel at the abundance of marine and bird life, breathe in the fresh arctic air and explore the spectacular scenery.

In mid-summer, I travelled to the islands with a small group of surfers and photographers, in a new Bentley Bentayga V8, to get off the beaten track and search out the nation’s surfing potential. However, as we sped along the island’s beautiful roads and scoured the craggy coastline, we quickly discovered that there’s so much more to see and do in the Faroe Islands than just surfing. Here are five of the most charming attractions we happened across during our trip: 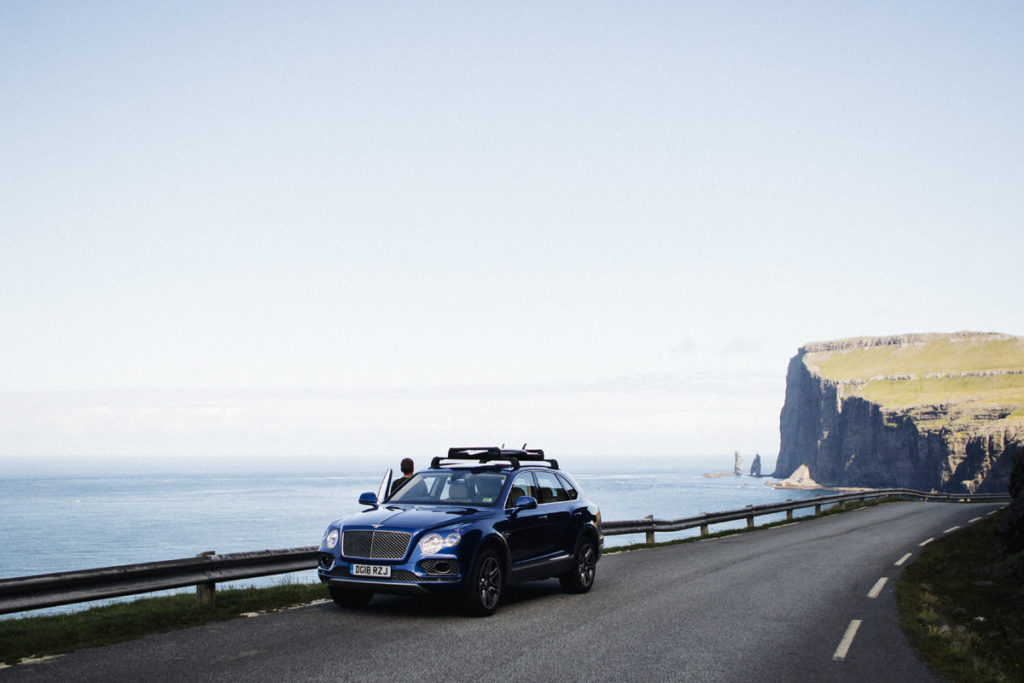 Clinging to the island of ‘Vágar’s western ridge, the small town Gásadalur has become the Faroes most famous tourist attraction. Thanks, in part, to the mesmerising waterfall of Múlafossur, which cascades off a towering cliff top into the frigid depths of the North Atlantic. The town used to be inaccessible by road, until 2004 when a tunnel was blasted through one of the mountains which surround it on all sides. Nowadays, tourist flock to enjoy the magnificent panoramic views and watch the flocks of seabirds which nest on the cliff faces.

On the northernmost tip of the mainland, a fantastically picturesque coastal road leads you down into the small seaside town of Tjørnuvík, one of the oldest on the islands. The town is famous for its hymn singing, as well as its stretch of sandy beach, which is a hot spot for both surfing and diving, offering the chance to see catfish and monkfish. The bay also offers views of the iconic sea stacks, known as the Giant & The Witch (Risin and Kellingin). Faroese legend tells of how the pair were sent to steal the islands and drag them to Iceland in the dead of night, but faltered and were turned to stone the next morning when the sun rose.

The isolated town of Saksun sits in a grand fjord on the north-west coast of Streymoy. A huge tidal lagoon leads through the sharply cut hills to a secluded sandy beach, only accessible at low tide. Aside from its stunning scenery, the town’s main attraction is a small church with an unusual story. In 1858 the residents of Saksun grew tired of hiking over the mountains to the neighbouring town of Tjørnuvík, so they decided to disassemble the church that sat there and carry it piece by piece to be rebuilt in their town.  Nowadays, the ancient building stands alongside a cluster of traditional grass-roofed Faroese homes, which house 14 permanent residence and a several-hundred-year-old farmhouse, which now functions as a museum. 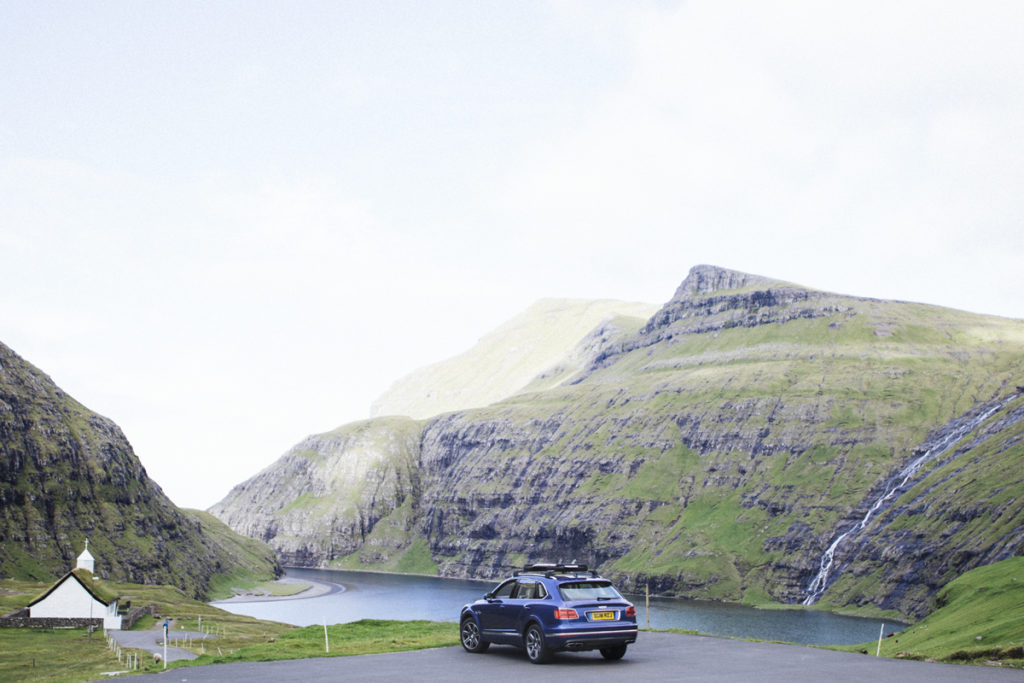 Traditional Faroese building next to the lagoon

The idyllic village of Gjógv is the most northern settlement on the island of Eysturoy. It takes its name from the 200-metre long sea-filled gorge that runs north from the village into the ocean. Although first mentioned in 1584, the town is thought to have been around for much longer, thanks to its natural harbour, which is reportedly the best in the islands. Nowadays the remaining inhabitants all live in traditional timber-walled, colourfully painted, grass-roofed cottages, giving the small secluded village a unique Nordic charm. Some of the islands’ best hiking and walking trails begin in the village, leading up and over the mountains that flank it on all sides, offering spectacular views out across to neighbouring islands. 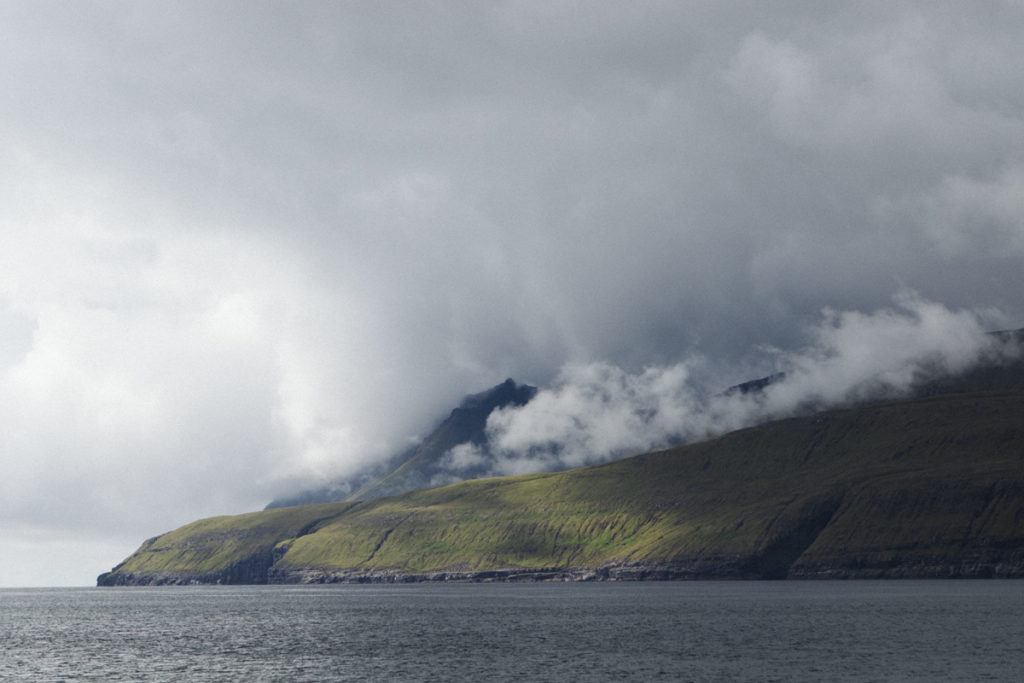 Clouds rolling through the coastline

Torshavn, which is the smallest capital city in the world, offers a wealth of attractions. There’s the charming old town of Tinganes, which boasts houses dating back 500 years, a cathedral and a selection of museums dedicated to celebrating and commemorating the Faroes’ natural history, art and historical treasures. Just outside the town sits The Nordic House, which is considered to be one of the most beautiful buildings in Scandinavia. It was designed by Ola Steen and Kollbrún Ragnarsdóttir in 1977 to serve as a reminder of the Faroe Islands nordic cultural history and hosts art exhibitions and daily free concerts. It’s the perfect attraction for a rainy day, which occur quite frequently in the Faroes. 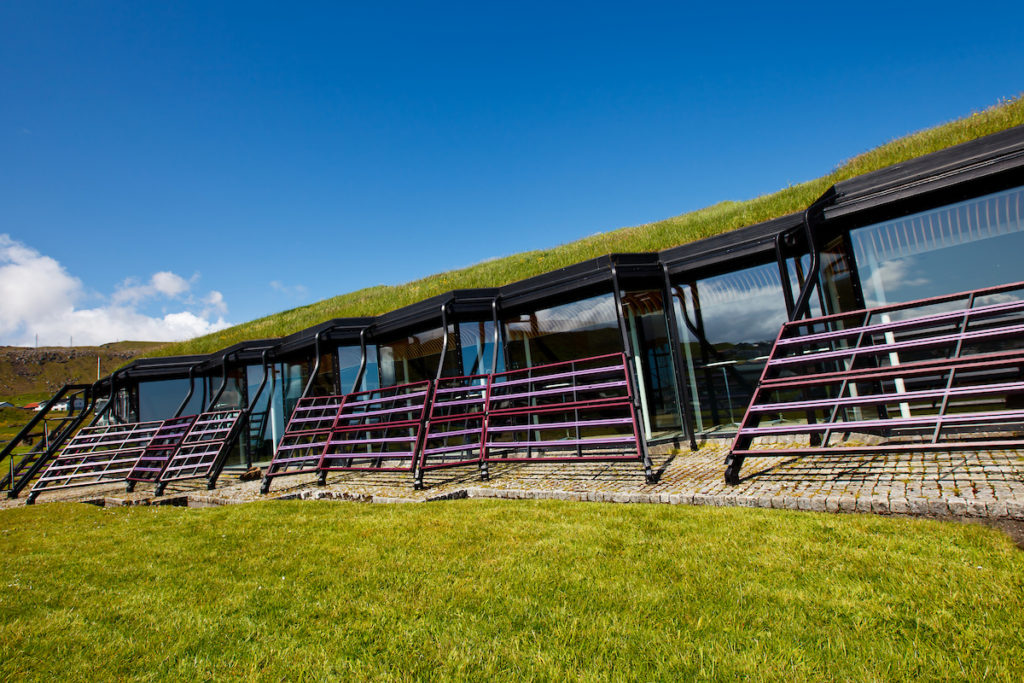 The exterior of the Nordic House, known locally as Nordurlandahusio, which aims to support and promote Nordic and Faroese culture.